The Rolex GMT-Master II Batman is one of the most well-loved sports watches, not just within the Rolex catalog, but in the watch industry. The Oystersteel construction and now iconic black and blue ceramic bezel proved to be versatile and enduring – and with recent upgrades, it garnered even more appreciation within the watch community.

Let’s take a closer look at the history of the Rolex Batman, and the different editions available.

The split-color bezel of the Rolex GMT-Master series has been its signature trait since it launched in 1954. Created to aid pilots, the GMT-Master’s bezel helps indicate a second timezone and daytime and nighttime hours through its bi-colored bezel. 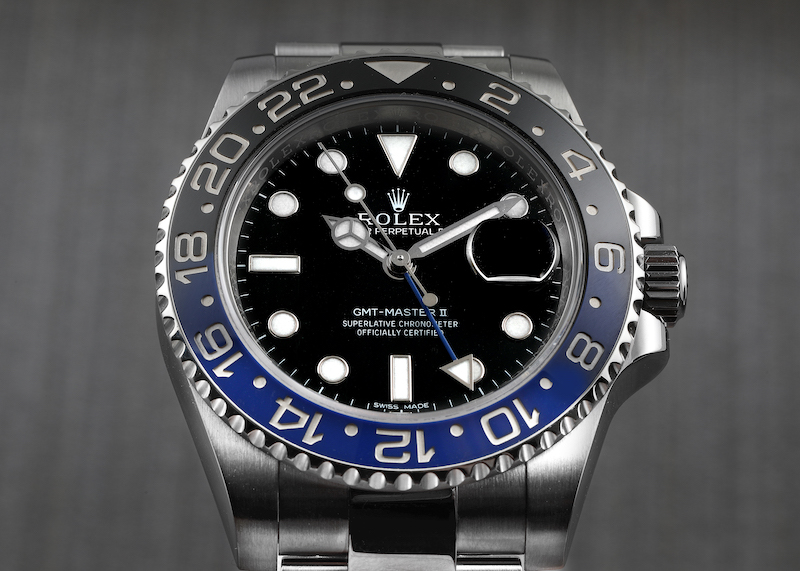 The famous bezel has been crafted in Bakelite and anodized aluminum since then, and with the introduction of the Cerachrom ceramic insert in 2005, it was inevitable for the GMT-Master II to follow. However, Rolex admitted that it would be challenging to use a single Cerachrom block for their bi-colored bezel. For the next eight years, Rolex worked on perfecting the method of using a single piece of Cerachrom with two different but crisp colors.

In 2013, Rolex was finally ready to introduce it to the public, and it came in the form of reference 116710 BLNR – now known as the Rolex Batman. 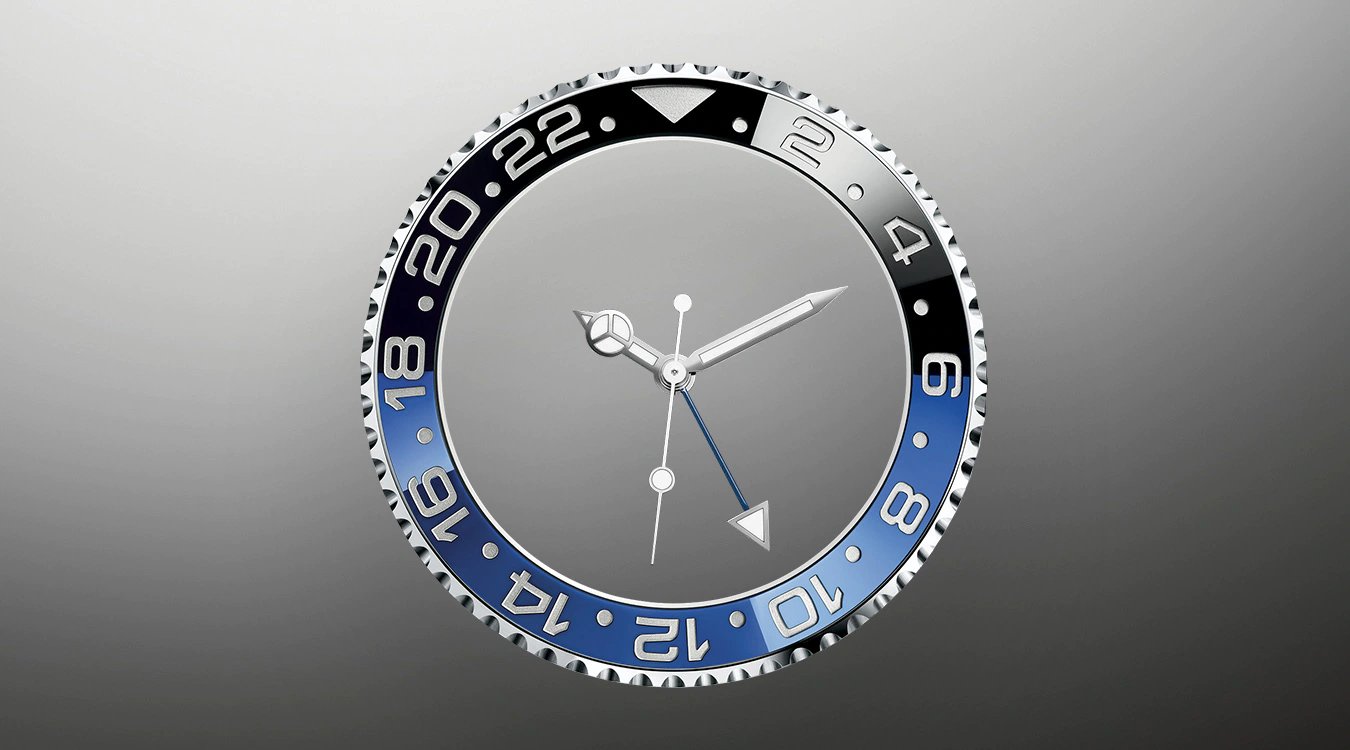 The Rolex Batman’s bi-colored ceramic bezel was the first of its kind. (photo: Rolex)

It sent the watch world abuzz. Not only was it the first ceramic bezel watch to be made in clean, two-tone colorway, it also came in a handsome black and blue combination. At the time, it was also the only bi-color GMT-Master II model available in stainless steel. The guests at Baselworld 2013 knew that Rolex had just launched a classic.

Rolex watches are famous for having nicknames, and anyone who’s into watches would certainly know what a Pepsi, Root Beer, or Kermit is. While none of these are in the official Rolex literature, they are used fondly by collectors and they certainly make it easier to discuss watches.

The “BLNR” in the Batman’s official name is a suffix for bleu / noir or blue / black in English. Rolex uses suffixes for their watches in order to help identify the watch from its name alone. These come from French words because as a Geneva-based company, it is the official language of Rolex. 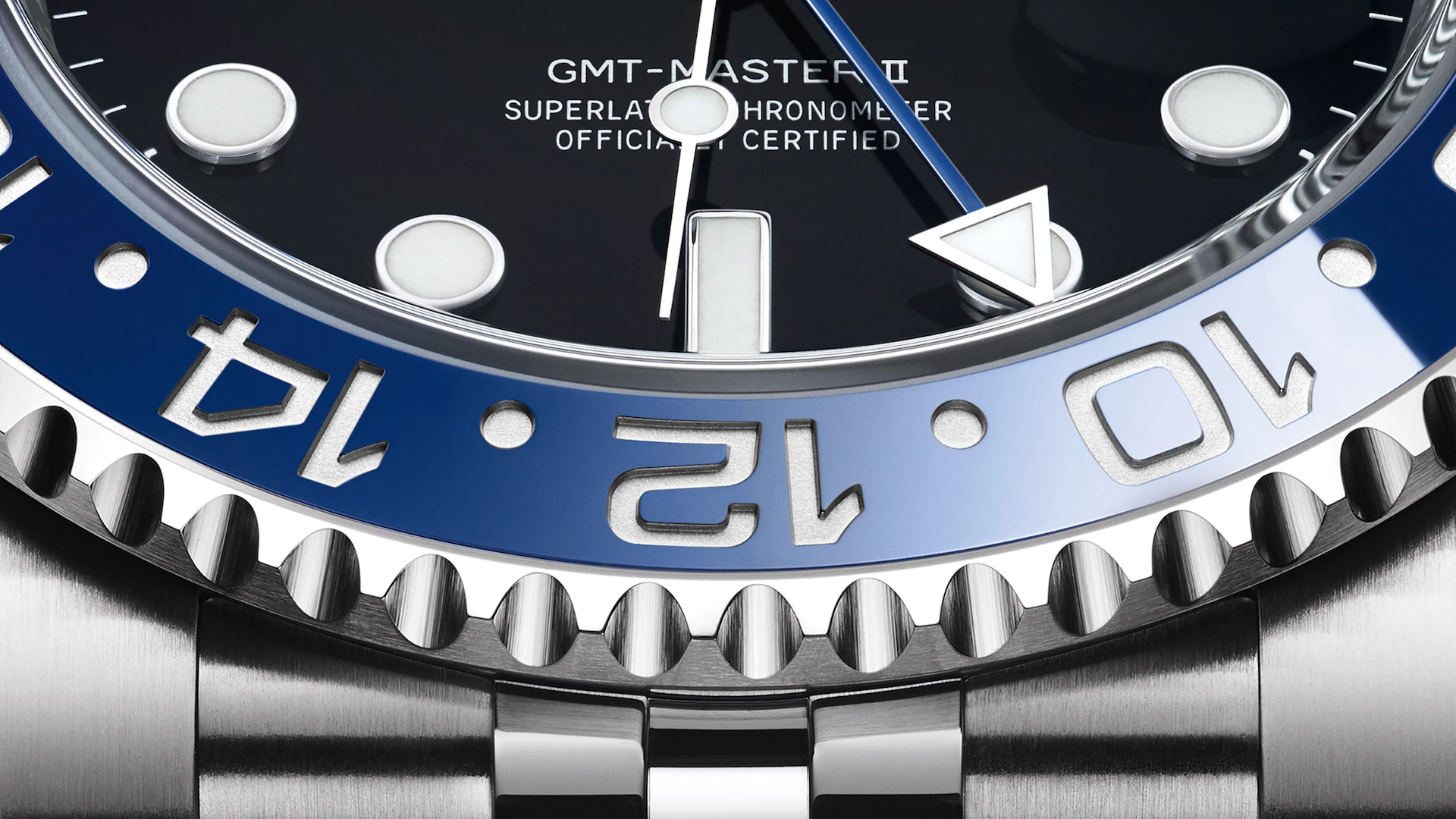 It’s also these bold colors that gave it it’s “Batman” nickname. Batman, of course, is a DC Comics superhero who is famous for being vigilante by night. The Rolex Batman is also sometimes called “Bruiser” or “The Dark Knight” by some fans as a homage to the character.

Now let’s go to the different generations of Rolex Batman watches that have been released, and what they each offer.

The original Rolex Batman 116710BLNR is most easily distinguished by its blue-black bezel, but it has other defining elements.

It follows the modern GMT-Master II 116710 introduced in 2007, which equipped the watches with features like the then new Caliber 3186 movement with a smoother operating hand, 50-hour power reserve, instant date and COSC certification. The watches still measure 40mm, and have 100m water resistance like previous GMT-Master II models, but it’s improved Triplock screw-down crown offers a more robust shield versus water damage and dust. 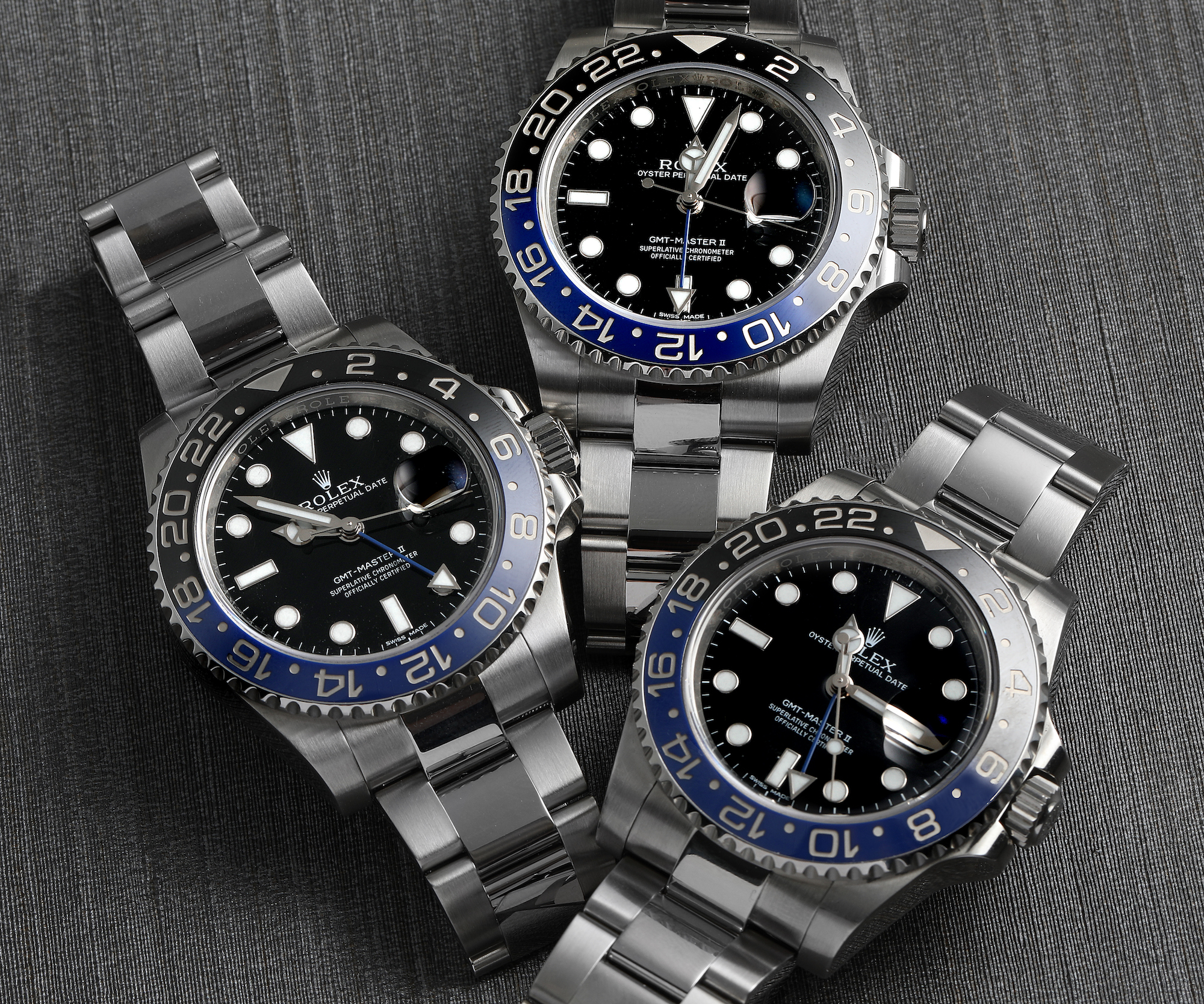 It also featured a “Maxi Dial” with larger hands and markers than the aluminum bezel editions. The Rolex Batman had the distinction of featuring a blue GMT hand, while other GMT-Master II models had a red hand.

Finally, the Rolex Batman came with a three-link Oyster bracelet with satin outer links and polished center links. The Oyster completes the sporty, ruggedly handsome look of the Batman.

The original Rolex Batman 116710BLNR had a short but remarkable five-year run, and in 2019 Rolex decided that it was time for an upgrade.

In 2018, Rolex re-introduced the Jubilee bracelet to the GMT-Master II line with the reference 126710BLRO Pepsi. It marked the first appearance of the Jubilee in the collection since the 1980s. A five-link Oystersteel Jubilee bracelet was especially designed for this generation of GMT-Master II watches, complete with an Oysterlock safety clasp that prevents accidental opening.

Fans suspected that the Rolex Batman might soon follow, and they were proven correct in 2019. The original ref 116710BLNR was discontinued to make way for the current edition, the ref 126710BLNR. The most obvious change is the Jubilee bracelet which gives the Batman a dressier feel. 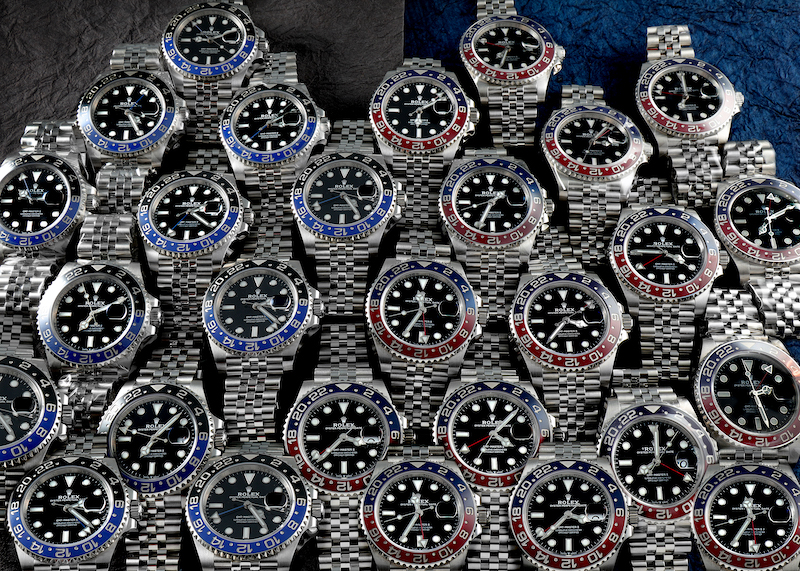 The Rolex Batman Jubilee Bracelet edition also comes with a more svelte profile on the wrist. While the case diameter remains 40mm, the lugs were made thinner and less angled, to make way for a more fluid appearance.

Beyond these aesthetic changes, the most remarkable improvement is the new Caliber 3285 movement that powers the timepiece. Equipped with the brand’s proprietary Chronergy escapement, the Caliber 3285 conforms to the brand’s Superlative Chronometer accuracy standard of just -/+ 2 seconds per day, and offers an improved power reserve of 70 hours.

While the ref 126710BLNR was well-loved, many fans of the original Rolex Batman also voiced out their preference for the Oyster bracelet. It is said that the sporty look of the Batman is best enhanced with the robust three-link design.

In 2021, Rolex silently brought back the Oyster bracelet to the current editions of the Rolex GMT-Master Pepsi and Batman. Since its hiatus in 2018, the classic three-link stainless steel bracelet was added as an option along with the Jubilee bracelet. 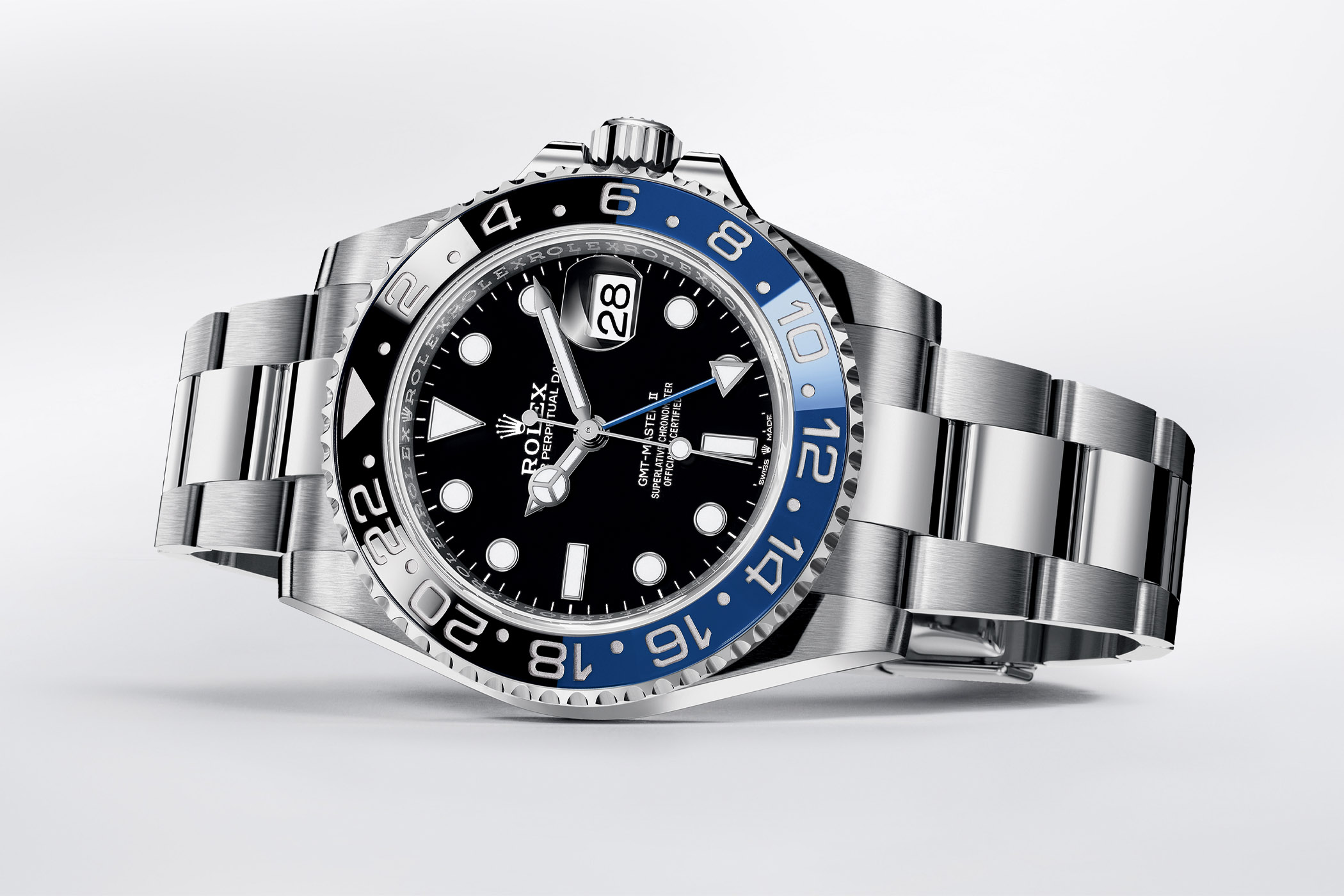 Rolex brought back the Oyster bracelet to the Rolex Batman in 2021 (photo: Rolex)

This also means that for the first time ever, the Rolex Batman comes with both the Oyster bracelet and the new generation Caliber 3285 beating inside. All in all, it brings together the iconic aesthetic of the original Rolex Batman with fundamental gains in terms of precision, power reserve, and resistance to shocks.

The Rolex GMT-Master II Batman turns a decade old in 2023. While it has a relatively short history, it has definitely made its mark in the industry and reserved itself a place in every watch collector’s wish list. Explore our collection of Rolex Batman watches at SwissWatchExpo.com.

0
November 10, 2022
SEARCH THE WATCH CLUB
EXPLORE THE WATCH CLUB
FOLLOW OUR CURATED WATCH COLLECTION ON INSTAGRAM
Hurry, this is your last chance to shop our Black

The Patek Philippe Gondolo ref. 5098 and the Franc

Black Friday is ON. Get your dream watch with an a