Breitling Watches are world-renowned for their precision and accuracy. This is something that has been perfected over the years, but not without careful consideration as to where and how their watches are made.

Specializing in professional and aviation watches, Breitling’s watches are completely Swiss made, manufactured in Switzerland, and made from Swiss components. Like other luxury watches, their movements are certified by the COSC (Swiss Official Chronometer Testing Institute) and are guaranteed to have the best precision and reliability.

A Brief History of Breitling’s Manufactures 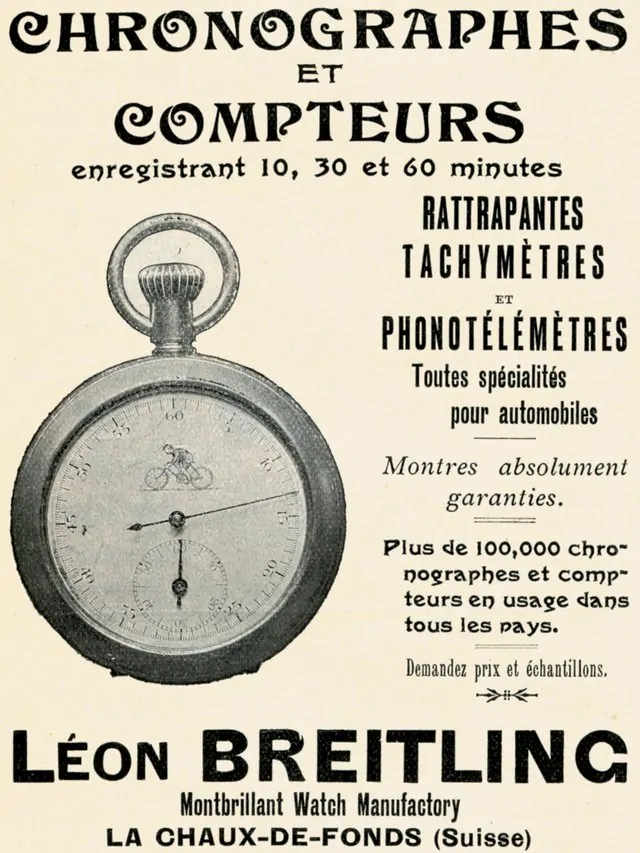 Breitling is an independent Swiss watch company that was founded in 1884 when its founder, Léon Breitling, opened his first workshop in Saint-Imier. This first workshop was designed to produce timepieces specifically for industrial and scientific purposes.

These innovative pocket watches that started his career gained him a considerable reputation. At the time, chronographs were in demand with the rise in technologies and work in the areas of industrial, military, and scientific fields.

With the company’s growing success, Breitling moved his company to La Chaux-de-Fonds in 1892 and his workshops would stay there for over 80 years. La Chaux-de-Fonds still remains as the watchmaking capital of Switzerland and the whole world.

Here Breitling succeeded in patenting a movement with a power reserve of 80 days in 1893, and by 1896 they created a chronograph that was accurate to two-fifths of a second.

Breitling in the 20th Century 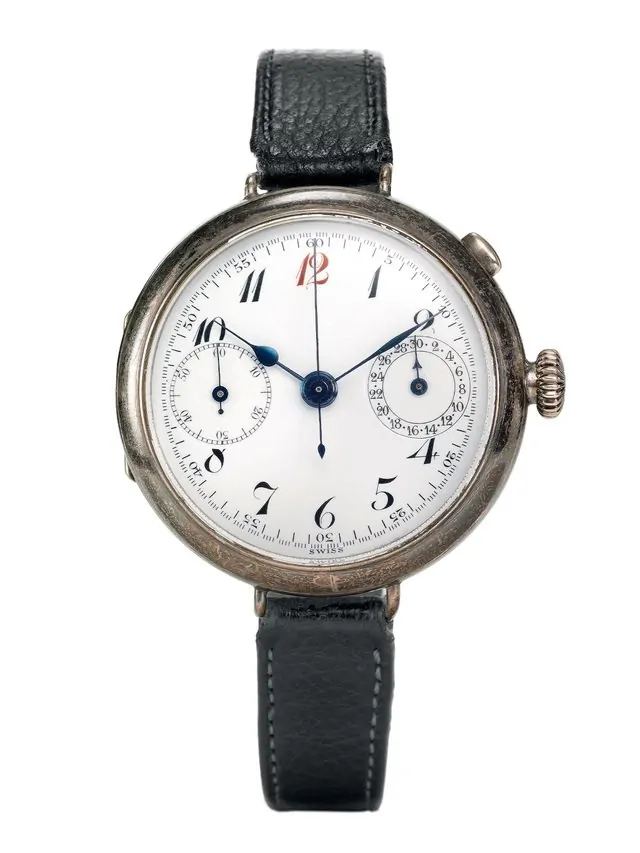 Gaston Breitling created one of the first wrist-worn chronographs in 1915 (photo: Breitling)

You can also thank Breitling for the first speeding tickets in Switzerland. In 1905, as the popularity of automobiles skyrocketed, Breitling patented a tachymeter that measured speeds between 15 and 150 km/h. Drivers could now calculate their speed, but the police could as well.

In 1915 Gaston Breitling created the first wristwatch for the company after his father’s death the previous year. These wristwatches eventually led to specialty watches that were prized in aircraft cockpits. Interestingly, the Breitling logo never appeared on the watch until the 1920s.

In 1927, Gaston passed away suddenly and since his son Willy was only 14 at the time, a group of watchmakers handled the company until he came of age. This group helped the company thrive and survive the stock market crash in 1929 and the subsequent Great Depression. 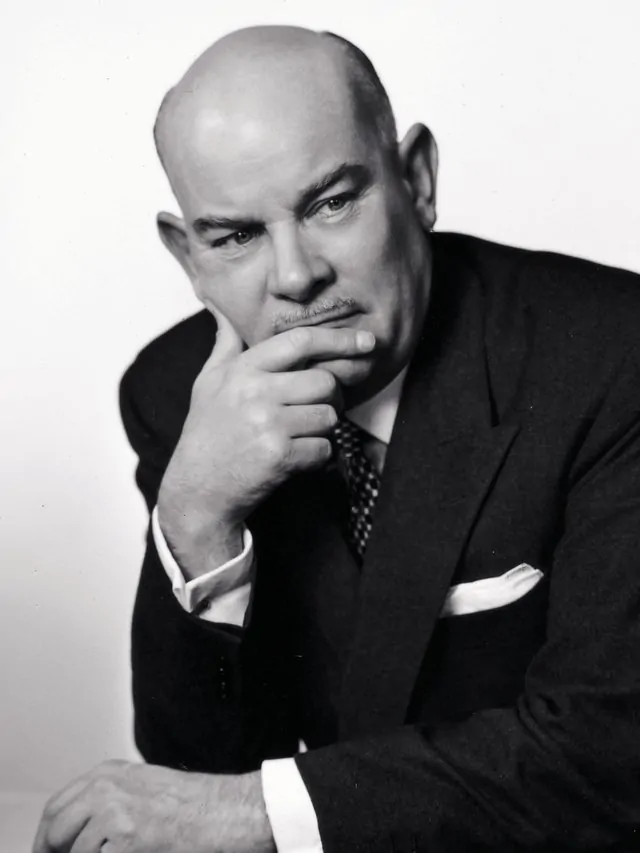 When Willy Breitling came of age in 1932 and took over control of the company, chronographs were the center of the business with over 40 different models for either the wrist or the cockpit. The company continued the family legacy of expert chronographs until Willy sold the company in 1979. Ernest Schneider and his family remained the guardians of Breitling until 2017.

After the sale, the company was registered as Breitling Montres SA and relocated to Grenchen in 1982. With the advent of the COSC, Breitling became the only company (major watchmaking company) in the world to offer COSC-certified movements in every model sold. Because of the challenges this placed on the company, they opened Breitling Chronométrie in La Chaux-de-Fonds in 2002 to specialize in making mechanical chronograph movements.

Breitling continues to this day to make incredible and innovative advances in movements at their new, ultra-modern facilities and state-of-the-art workshop in Grenchen, Switzerland. In 2001 they introduced thermally compensated SuperQuartz™ movements in their electronic models.

Where are Breitling Watches Made? 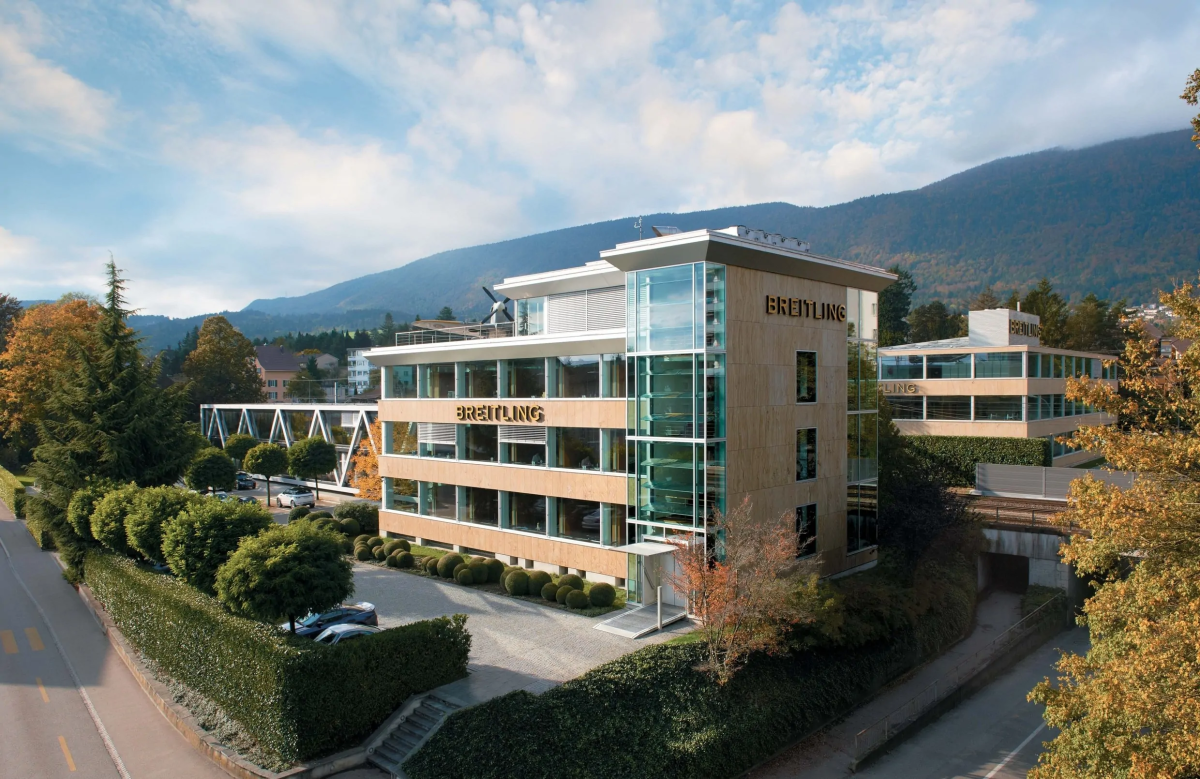 Breitling watches are made in Switzerland. While the company’s headquarters are located in Grenchen, Switzerland, the movements for Breitling’s mechanical watches are produced at the facilities in La Chaux-de-Fonds established in 2002 called the Breitling Chronométrie.

How are Breitling Watches Made? 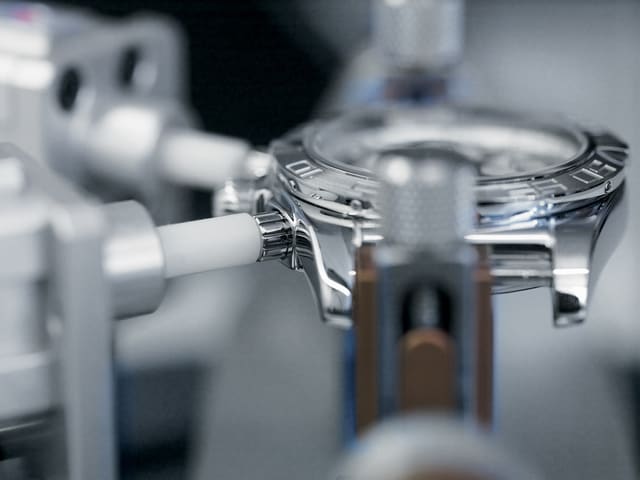 Research and development at the Breitling Chronométrie laboratory (photo: Breitling)

While the movements in Breitling watches are made by state-of-the-art machines in Breitling Chronométrie, if the machine detects three possible inaccuracies in any parts they will not continue until it has been checked by the expert people that work there around the clock.

Breitling watches are assembled by a team of watchmakers and technicians in the company’s manufacturing facility, who use their expertise to create beautifully crafted timepieces. The assembly process is done by hand, giving each watch its own unique look and feel. 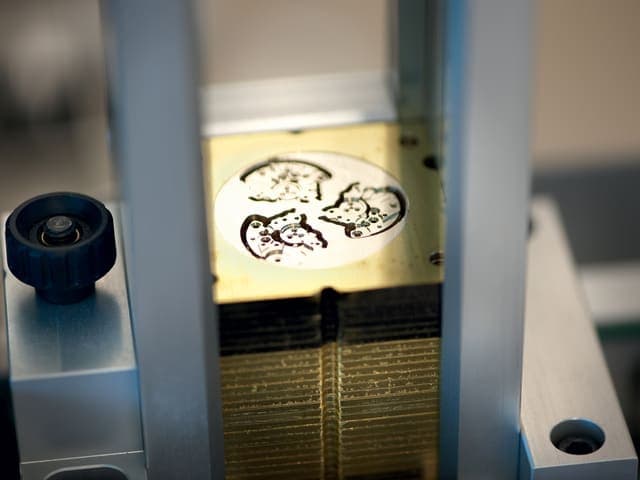 The making of a Breitling movement (photo: Breitling)

Breitling’s movements and calibers are made in house and guaranteed to be high performance timepieces with a five-year warranty. These movements are created in their highly specialized facility on the outskirts of La Chaux-de-Fonds. 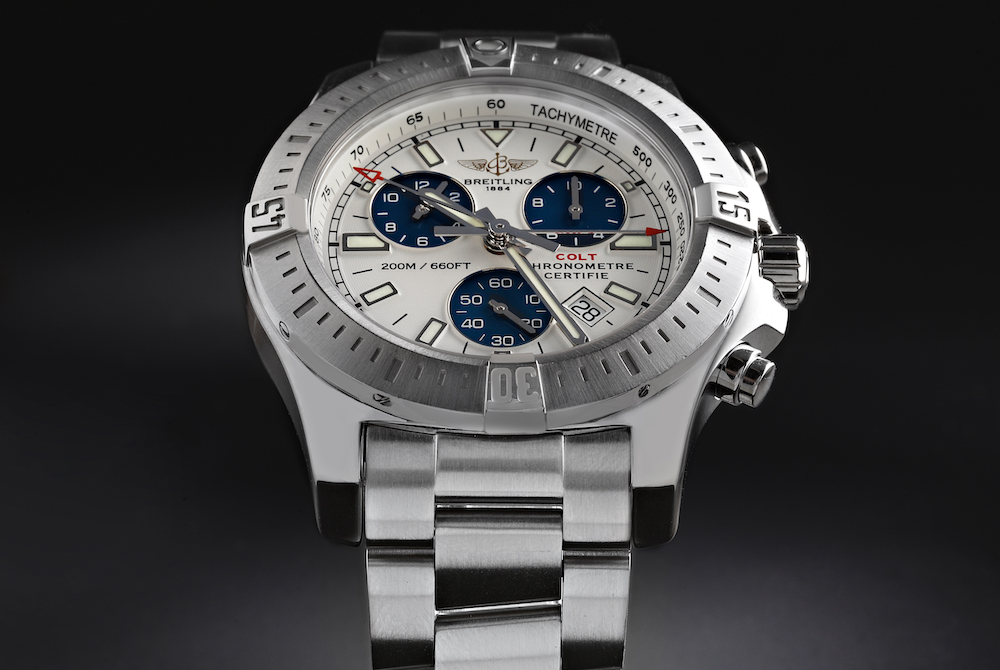 Establishing themselves as a watchmaker for professionals means that Breitling cases are built to withstand extremes. They’ve been developed to withstand extensive use and abuse while maintaining a wonderful aesthetic appeal.

Breitling uses only the best quality metals like the 316L antimagnetic stainless-steel alloy or titanium. These cases are made through a stamping process adding to their exceptional waterproofing capabilities. 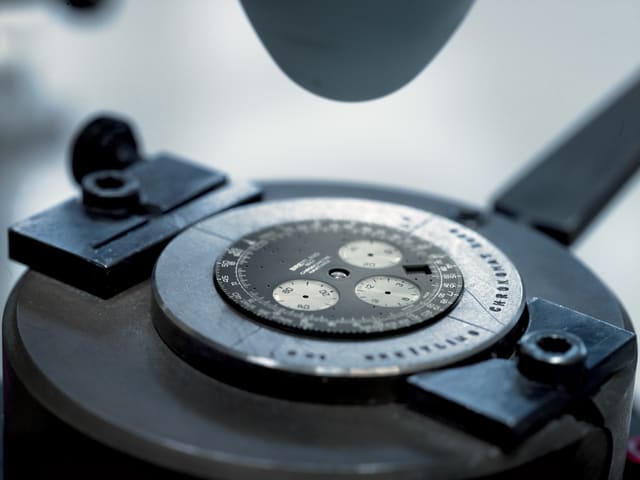 In the process of constructing a dial for a Breitling watch (photo: Breitling)

With cutting-edge facilities, you expect cutting edge designs, but Breitling mastered these production methods by combining them with traditional skills. Every detail on their dials is designed for quick and easy reading with a simple glance.

The dials are drilled and then polished and colored via lacquer or electroplating. 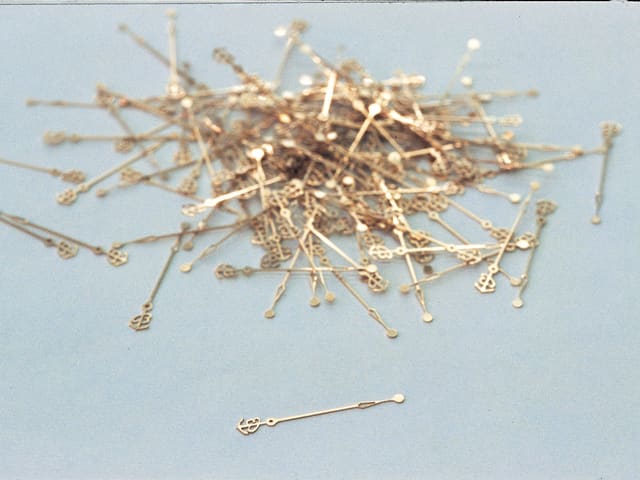 Manufacturing the hands of a Breitling watch (photo: Breitling)

If you’ve seen a Breitling watch, you’ll understand the care that goes into making the hands for their watches. The chronograph center seconds hand is adorned with the Breitling B and requires meticulous care. The tolerances allowed in their machining are absolutely minimal. To the point that there are few manufacturers that can match the finesse of the machines at Breitling’s facilities.

There are numerous stages involved in making the hands for these watches and then rigorous testing to make sure they pass all quality standards. Once they’ve passed the tests, they go through a multi-phase process of electroplating and application of luminescence. 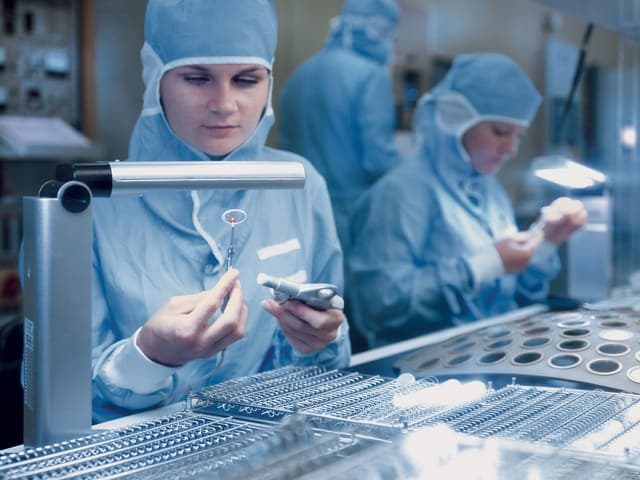 The crystal is the transparent cover that protects the watch’s face and allows you to see the time. Crystals are made of synthetic sapphire or mineral glass, both of which can withstand extreme pressure and temperature changes. Glare-proofing is applied to both sides through an elaborate vacuum-evaporation process. This anti-glare treatment cuts 99% of the reflections that can be seen by the naked eye. 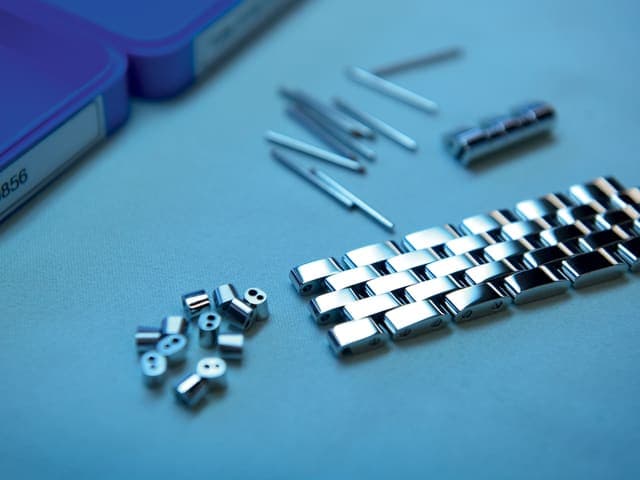 The Breitling bracelet has distinguished itself over the years as comfortable and incredibly sturdy while displaying an eye-catching high-end finish. They’ve been designed and tweaked since the 20th century to provide the best solution to the traction and torsion that watch bracelets are subjected to on a daily basis.

The individual links are patiently polished and finished before assembly and then again after. The link and pins are so durable because of the fusion-welded process at temperatures of 3400 degrees C.

Assembly and Casing Up 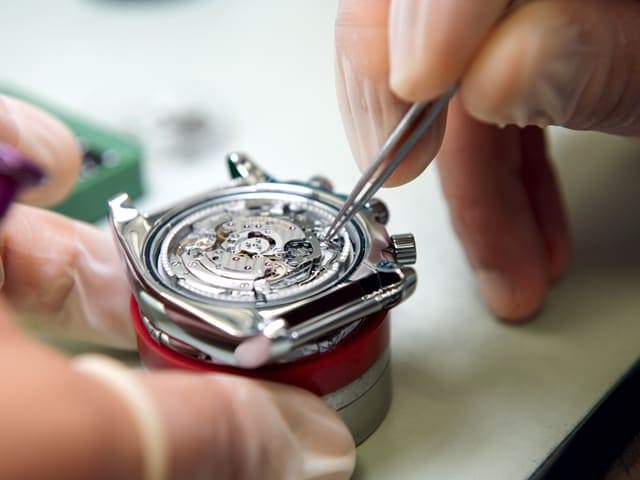 Thanks to that system, these waterproof cases won’t lock in any air that possesses enough moisture to lock inside the case which would cause condensation when exposed to lower temperatures. Keeping the humidity rate below 50% and renewing the air completely six times per hour keeps any chances of condensation at bay.

The other potential contamination, dust, is eliminated via a sophisticated air filter system.

All pieces are fitted together to perfection and machines control the exact amount of torque needed, no more, no less. After the case back is closed, they are laser-engraved with the individual number allotted by the COSC. 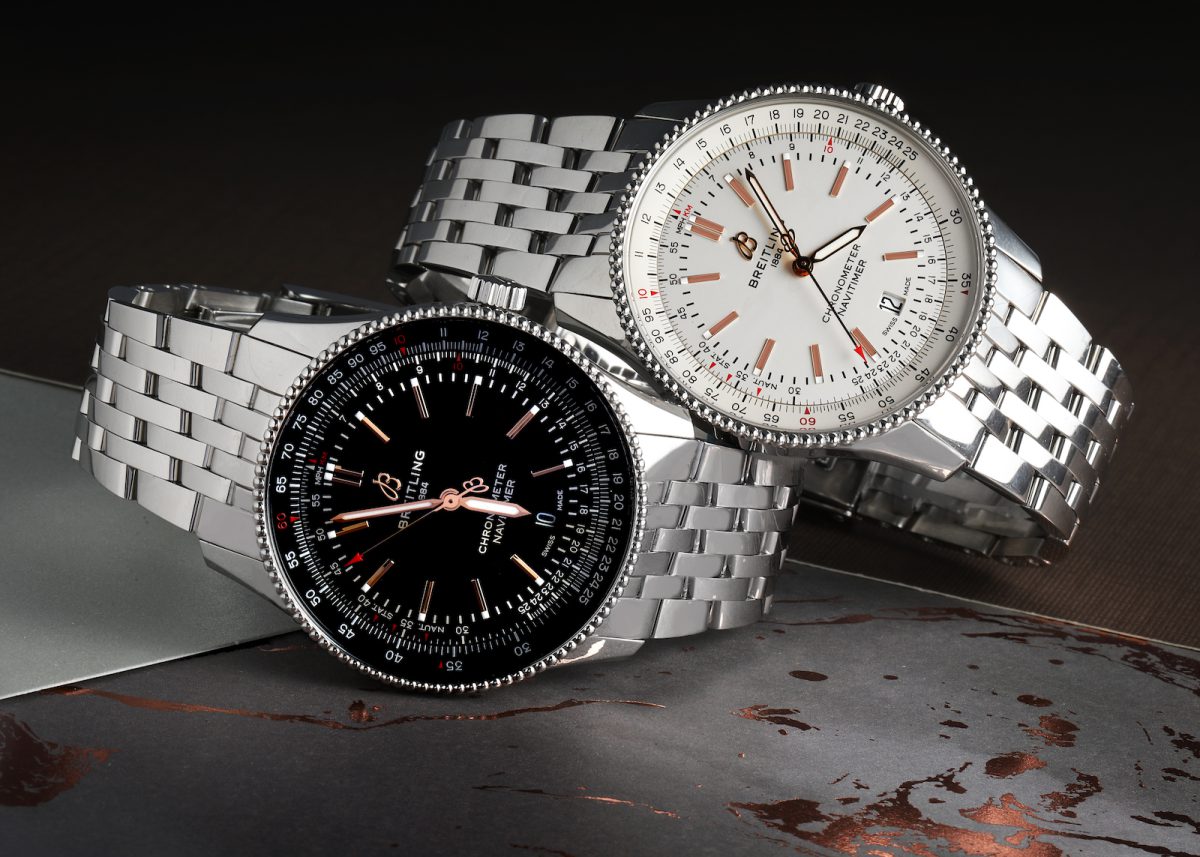 We hope that this article has helped you gain a better understanding of how and where Breitling watches are made.

As you can see, the process is very complex and involves many different steps that ultimately create a high-quality product.

The end result is well worth it, with each watch being an individual piece of art that tells its own story. Make yourself a part of the story and find your very own Breitling watch from our wide selection at SwissWatchExpo.com.