The chronograph is one of the greatest watch inventions that has stood the test of time. Its enduring craftsmanship, intricacy, and legacy have made it one of the sought-after complications in the market. In today’s digital era, the mechanisms of a chronograph have been reduced to mobile devices, but owning an analog timepiece such as the chronograph still holds high value and relevance today.

Below, we’ll take a quick journey on the origin and development of the chronograph, its functionality, performance and use. We’ll also take a closer look at two popular types of chronographs, and practical uses of a chronograph.

What Is a Chronograph?

The chronograph dates to more than 200 years ago in 1816 when an eager French horologist, Louis Moinet, invented a new watch technology to use in astronomy. However, it was five years later when the chronograph was first marketed publicly. 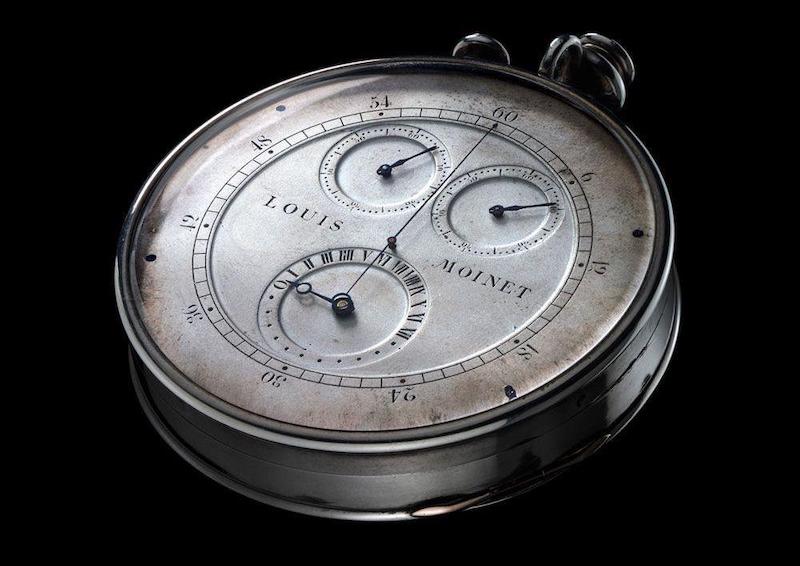 Its precision to measure time led to further developments and became highly useful as a tool for the military, pilots, doctors and even athletes such as race car drivers and runners. It’s a multi-tool, multi-functional watch that is able to perform various calculations aside from telling the time.

Chronograph comes from the Greek word “chronos” (time) and “graph” (to write or instrument for recording). In 1915, the global watch company Breitling was one of the pioneers in developing a chronograph with a separate stopwatch function. Since then, new complications were introduced and added. 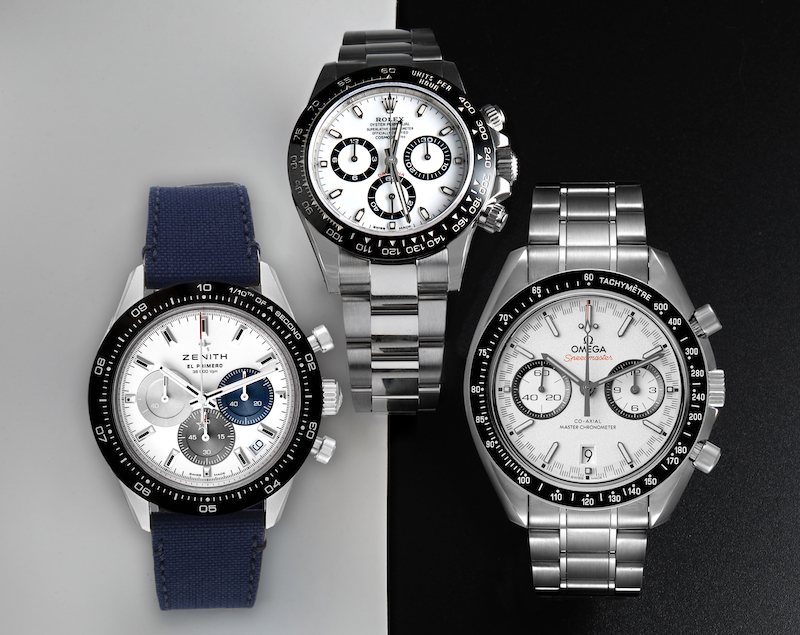 How does a chronograph work?

Before we explore how a chronograph works, let’s identify its important parts and how each component works. A chronograph is basically a stopwatch, but as watchmakers continue to enhance and add new features, it has become an intricate analog timepiece that’s engineered to measure time with mathematical precision.

It has three standard chronograph measurements – the seconds, minutes, and hours. Most chronographs have two buttons located on the right side of the watch which is separated by the crown in between: the first one is for starting and stopping the stopwatch, while the second button is to reset the time. On the dial are smaller sub-dials which display the minutes, hours and small-seconds. 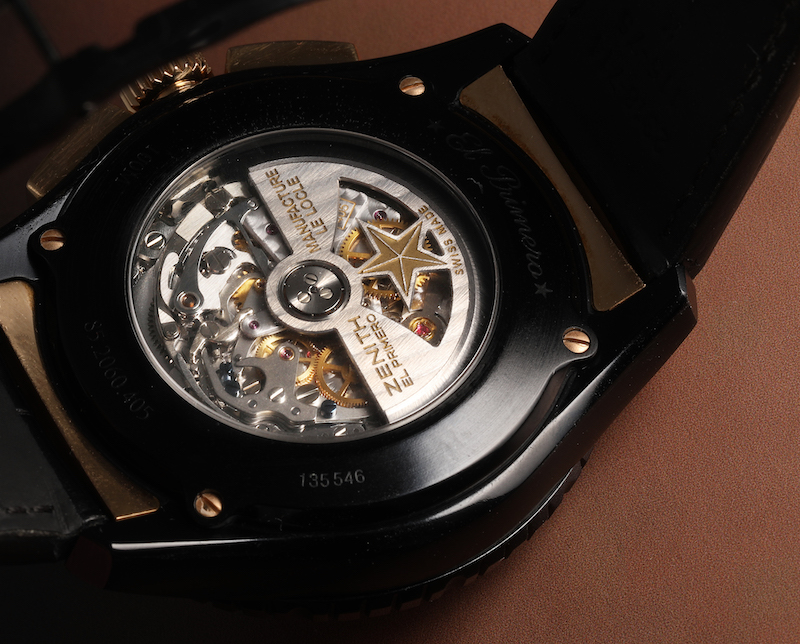 Chronographs can be powered by different types of movements, whether self-winding or automatic, manual-winding, or quartz. Self-winding movements are powered by the motion of the users wrist, so they will stay wound as long as the watch is worn regularly. Manual winding watches meanwhile, need to be wound by hand for them to operate. Quartz watches are powered by batteries.

Depending on how the chronograph was designed, it can measure periods of time up to 30 to 60 minutes, or 12 hours.

What are the practical uses of a chronograph?

The chronograph’s multi-functionality has made it a powerful watch used by various professions that require accuracy and precision in measuring time. Here are just some of the common features of the chronograph and where they are used:

Stopwatch
The stopwatch is the most basic feature in a chronograph. It can measure split seconds, seconds and minutes. 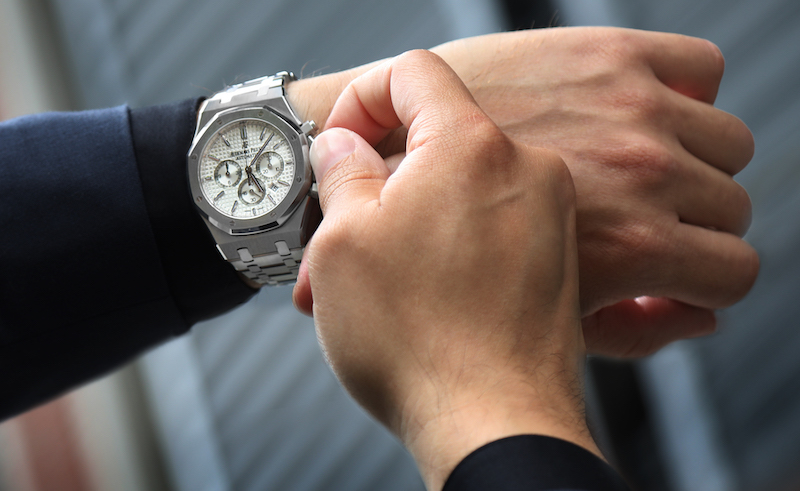 Tachymeter
The tachymeter, usually a rotating bezel, is a scale used for measuring speed. F1 athletes use this feature to time their races. Another example of its practical use is to measure the speed of a plane. 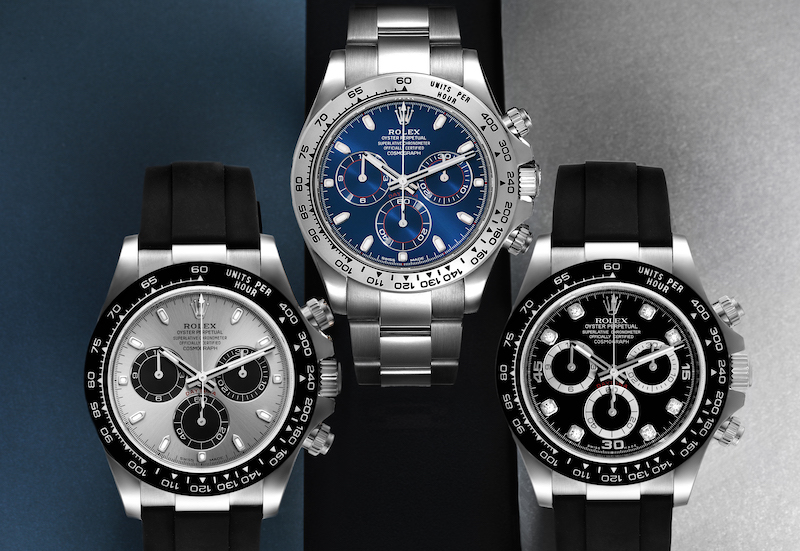 Telemeter
The telemeter scale measures the approximate distance from an event that can be seen or heard. Examples are lightning, fireworks or the fire range of artillery. Its unit of measurement is kilometer.

Pulsometer
The pulsometer is useful for doctors and nurses to take accurate calculations of a patient’s pulse rate.

The Flyback and Rattrapante are the so-called special chronographs because of the mechanisms that offer added functions beyond the stopwatch.

Flyback Chronograph
Swiss luxury watchmaker Longines was responsible for developing the Flyback function in 1936. It was used by military pilots to practice flight training to combat during the war. Its mechanism works by allowing the second push-piece at 4 o’clock, which resets the time back to zero after the watch has been stopped at 2 o’clock, to be activated any time without stopping the ongoing measurement. 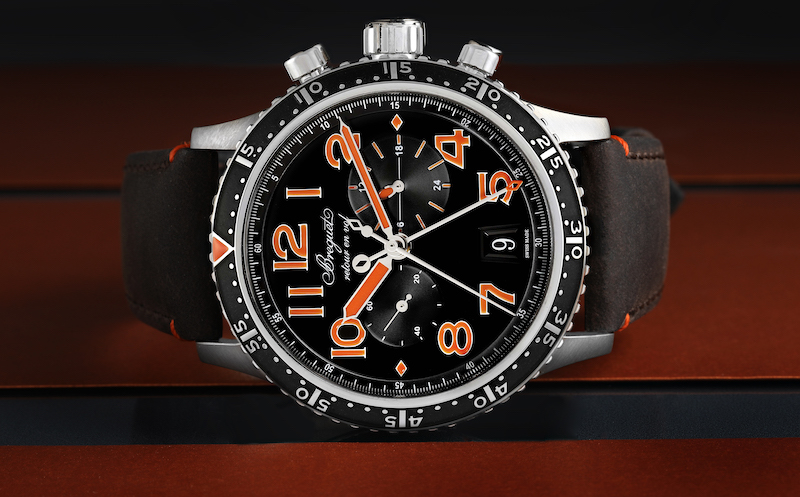 It is called ‘flyback’ because the hand returns quickly as if in flight. In French, it’s called “retour en vol”, which means “return in flight”. Breitling and Longines continue to be the giant names in Flyback chronographs. Other luxury brand watches that incorporated this mechanism are Patek Philippe, Hublot and Chopard to mention a few.

Rattrapante Chronograph
The Rattrapante, also known as the double chronograph, measures intervals that is ideal for timing races. Its mechanism allows both of the second hands to move on top of the other. An additional mechanism allows the hand to be stopped repeatedly to record the split times, then renews back to catch up without affecting the main chronograph hand. 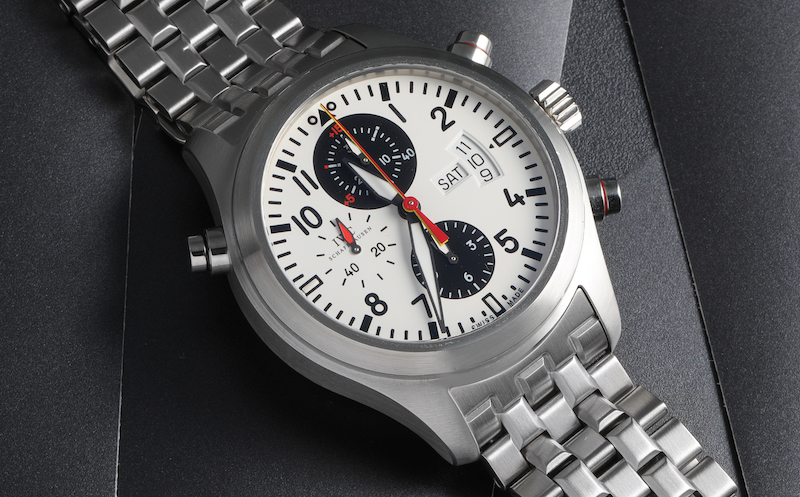 In French, “rattraper” means “to catch up”, thus the name. Swiss watchmaker Adolphe Nichole, known for inventing the chronograph reset function, developed the rattrapante in the 19th century.

In 1999, the first rattrapante chronograph wristwatch created in 1922 by Patek Philippe sold for over $1.9 million.

Some great reasons to own a chronograph

Aside from being a status symbol, the chronograph boasts of mechanical complexity and sophistication, a time-tested legacy, and of course, great practical uses. If you’re thinking of adding a chronograph to your collection, here are four great reasons to own one.

It offers more functionality than the average watch.
The number of developments the chronograph went through over its 200-year existence, only made it better. Yet, one thing remains consistent: its accuracy and precision in measuring and calculating time. 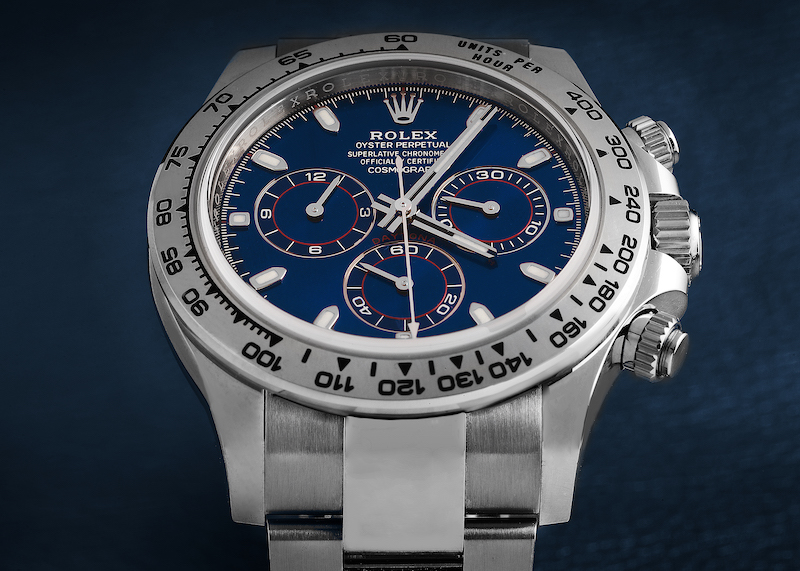 It has great aesthetic appeal.
While clean, time-only dials and haute horology watches do have their strengths, the chronograph has a unique symmetrical look. The use of two to three subdials adds balance to the dial, while the pushers lend a cool and rugged feel to the timepiece. The thoughtful and purposeful way that these parts are positioned in chronographs make it not only pleasing to the eye, but also add to their ease of use. 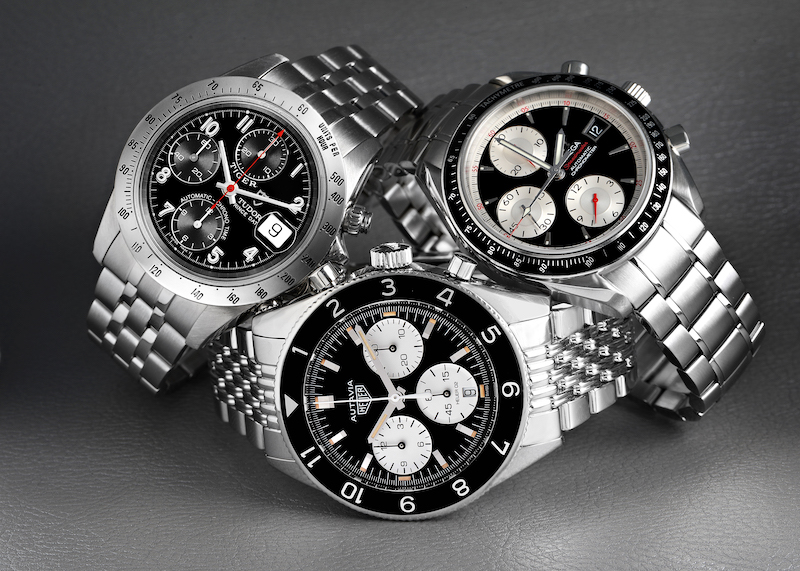 It’s mechanically complex.
Aside from its design, what collectors particularly appreciate about chronographs is the amount of time and effort that goes into its inner workings. Integrating a stopwatch function into the basic time and date features of a watch is a far more complex process than it seems.

Moreover, there are several ways to execute a chronograph, specifically by using cams and column wheels. While both versions can get the task done, the column wheel is more intricate due to the fragility of its teeth. This is ultimately reflected in its price. 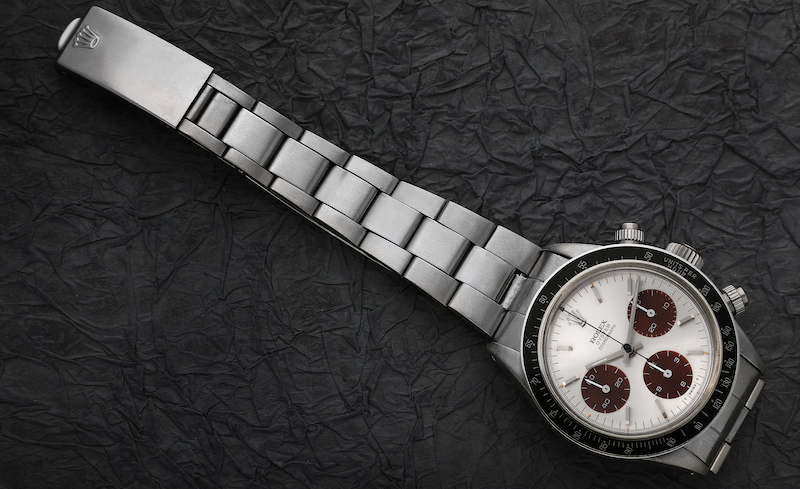 It is an icon of watchmaking history.
Because of its multitude of uses and universal appeal, the chronograph has been a part of countless historical events, and have graced the wrists of many important figures. The Omega Speedmaster, for one, was present during the first moon landing, and played a crucial part in many lunar explorations. The Rolex Daytona and Tag Heuer Carrera have timed many important races and are now icons of automobile racing. These important events have made the chronograph more than just a tool, but an important part of culture and history.

<>
With their practical use, fine craftsmanship, iconic design, and historical significance, chronographs have a place in each collector’s watch box, whether they’re starting or seasoned. Explore our collection of chronograph watches at SwissWatchExpo.com.

0
November 22, 2022
SEARCH THE WATCH CLUB
EXPLORE THE WATCH CLUB
FOLLOW OUR CURATED WATCH COLLECTION ON INSTAGRAM
Hurry, this is your last chance to shop our Black

The Patek Philippe Gondolo ref. 5098 and the Franc

Black Friday is ON. Get your dream watch with an a