Cartier watches are known for their artistry and quality. They’re also a long-standing symbol of fine taste, having been the choice jeweler of many royals and luminaries. If you’ve ever fancied a Cartier watch, we’re sure you’ve wondered – where are Cartier watches made?

Cartier has been making beautiful timepieces since the company was founded in 1847 by Louis-François Cartier. When you think Cartier, you think France and Paris, but most of the innovative pieces are now owned by the Swiss conglomerate Richemont and all their watches and jewelry are made in Switzerland.

The first Cartier watch was launched in 1853, but Cartier was only an établisseur at the time. This means while they designed and built their own cases, they bought their movements from other specialists, namely Jaeger-LeCoultre, Audemars Piguet, Patek Phillippe, and Rolex. What Cartier did was fashion a glass back to their wristwatches so you can see these fine movements in action.

Like many watchmakers of their time, they made their own innovations and developed key components of wristwatches we might take for granted today. They released the first commercially produced wristwatch in 1911 (the Santos), and the folding clasp on watch bracelets that you see everywhere today was invented by Cartier in 1910.

In 1977, they sought out an industrial partner, Ebel, in the heart of watchmaking – Switzerland. They eventually bought Ebel’s watchmaking business to consolidate their watchmaking into a new factory in La Chaux-de-Fonds in 2000. This was when Cartier became a full manufacturer, producing their own watch movements; the first of which was produced around 2002. 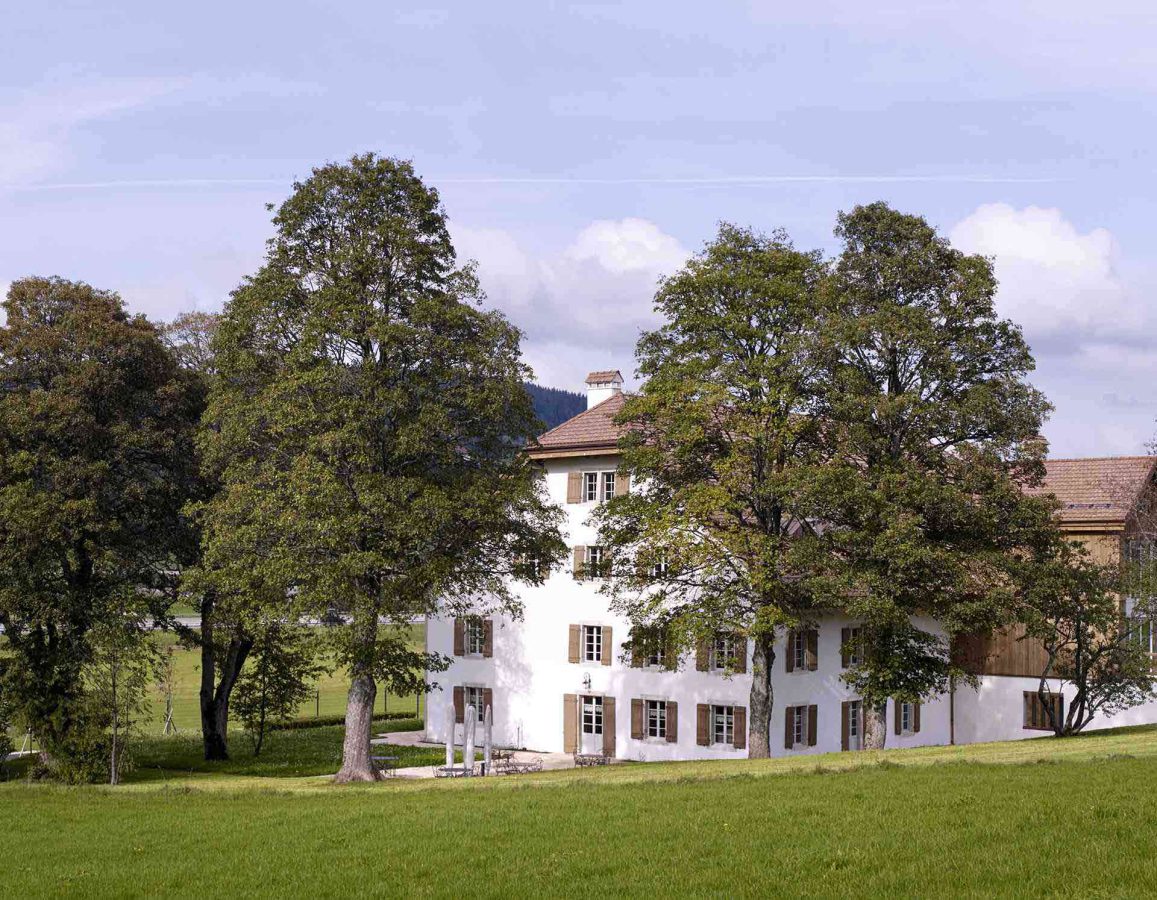 Between 1998 and 2008, Cartier often faced problems with actually receiving the components they needed to release their new models on time. Reliability became an issue, and coupled with the rising importance of creating your own watch movements to maintain quality and be really successful in the world of watchmaking, they needed to produce their own calibers and as many of their own parts as possible.

Today, Cartier’s watchmaking business is conducted over 6 production sites in Switzerland, not France. The Cartier Manufacture in La Chaux-de-Fonds brings together over 120 professions in a 33,000 square meter space where their traditional steel or gold watches are first designed, 3D printed, and the approved for production. This manufacturing center launched itself in 2008 under the watchful eye of an innovative watchmaker, Carole Forestier-Kasapi (first hired in 2005) who had previously worked for Audemars Piguet and Van Cleef & Arpels.

The Maison des Métiers d’Art is located right next door on an old, renovated farm. This is a crafting center for fine watches, fine jewelry, marquetry, enameling, and fire.

These facilities are where the design process starts and then the production is shifted to the other five.

The design team uses computers to create 3D models of a new design, down to all of its components and any new tools that might be needed to make these components. These designs go through simulations of use, wear, and function before they are approved for prototyping. This design team even figures out how tight each screw should be in the final assembly process!

If the virtual model passes all the simulation tests on the computer, it’s signed off for the production of a wax model using a 3D printer. These state-of-the-art printers print the entire watch, including a functioning bracelet with moveable links. The model allows the designer to get a feel for the watch and how it sits on the wrist in a way that no computer screen can do for you. 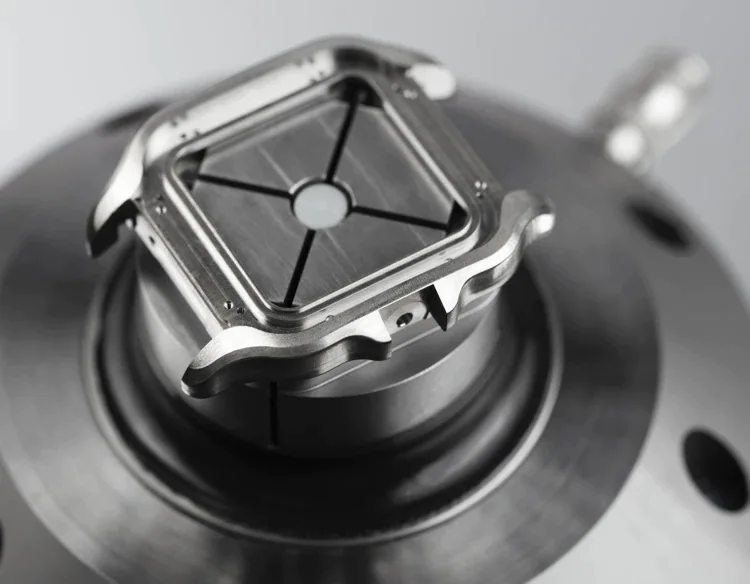 Machining the components of a Cartier watch (photo: Cartier)

Glovelier in the Jura is the first step in watchmaking. The fine metal cases are stamped out for strength and waterproofing.

Metal stamping by machines is the first process in the production of most of the components of Cartier watches from the cases and bracelets to the hands and dials. 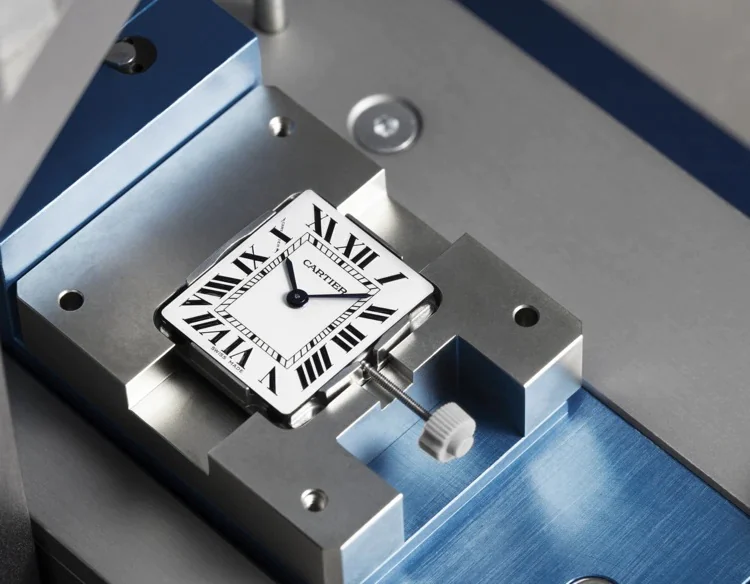 Part of the casing process is the watch crystal. Cartier’s curved watch crystal is a component that has been abandoned by most other watchmakers as the creation process was tedious and resulted often in a pile of broken glass. Most watches use sapphire crystal for flat surfaces, but Cartier wants those curves which requires mineral glass.

To make curved glass, a flat piece of glass is placed on top of a mold and then heated to 600 degrees. This melts the glass onto the mold. As long as this delicate process is completed successfully, the curved glass piece is then polished to perfection before fitting to the case. 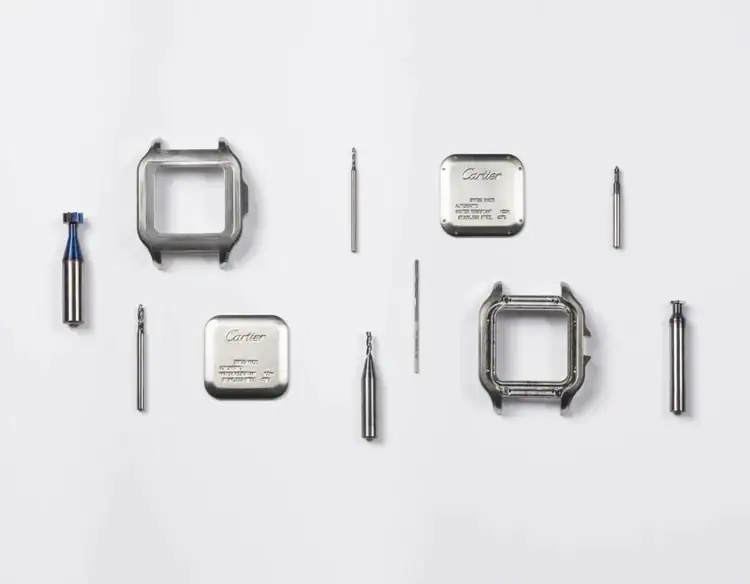 The case and bracelet assembly process is done at the Les Brenets factory in Switzerland. The first step is to put together all of the parts that make up the watch case, which include:

The next step is for these assembled pieces to be fitted together. Once this has been done, they proceed to add on other elements of the watch such as dials, hands, and other small parts before finally painting them all over with their signature colors (including black lacquer). 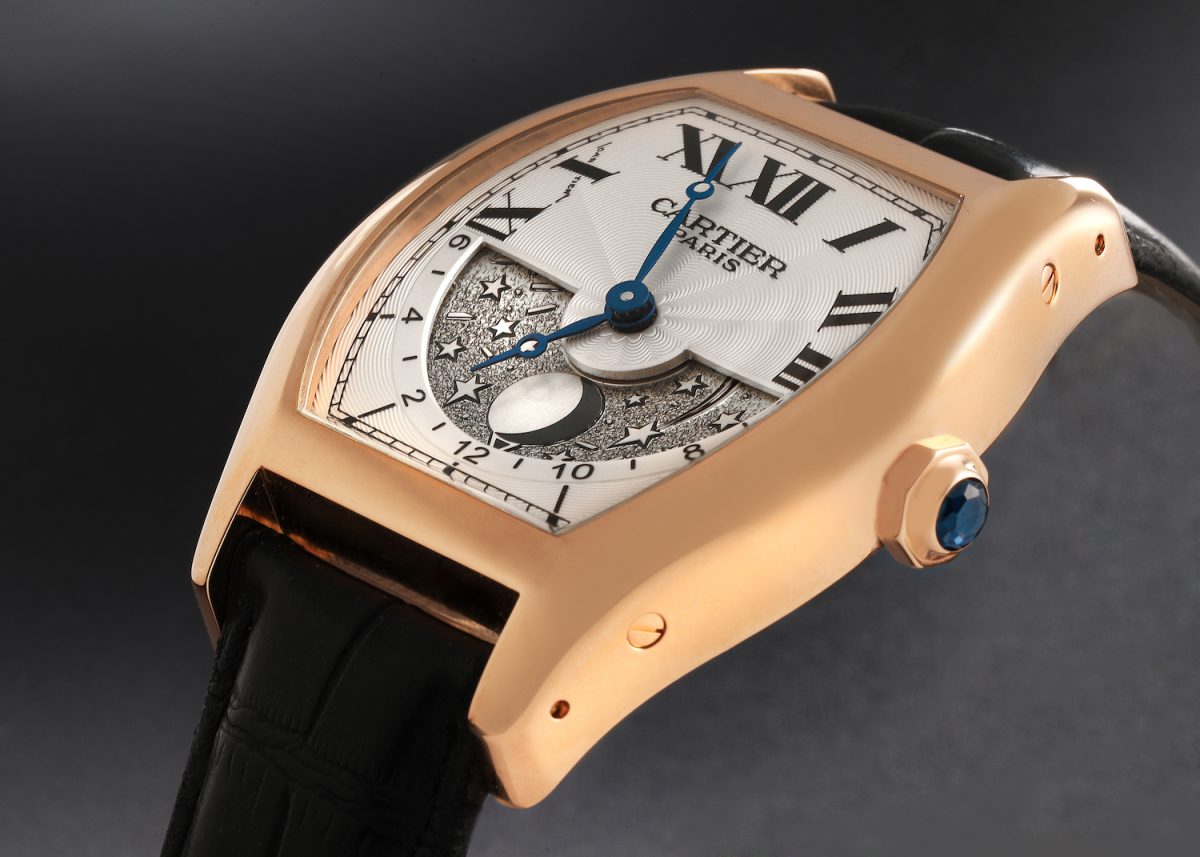 Steel and gold watches are produced in Fribourg in Villars-sur-Glâne.

If you’re looking for where Cartier watches are made, the answer is Fribourg. The home of the brand’s watchmaking tradition, it’s here that all of Cartier’s cases are custom-made by hand. This includes those used in their most famous models, including the Tank and Santos collections.

Of course, there’s much more than just case assembly happening at this facility — but it’s an important part of what makes these luxury timepieces so special. 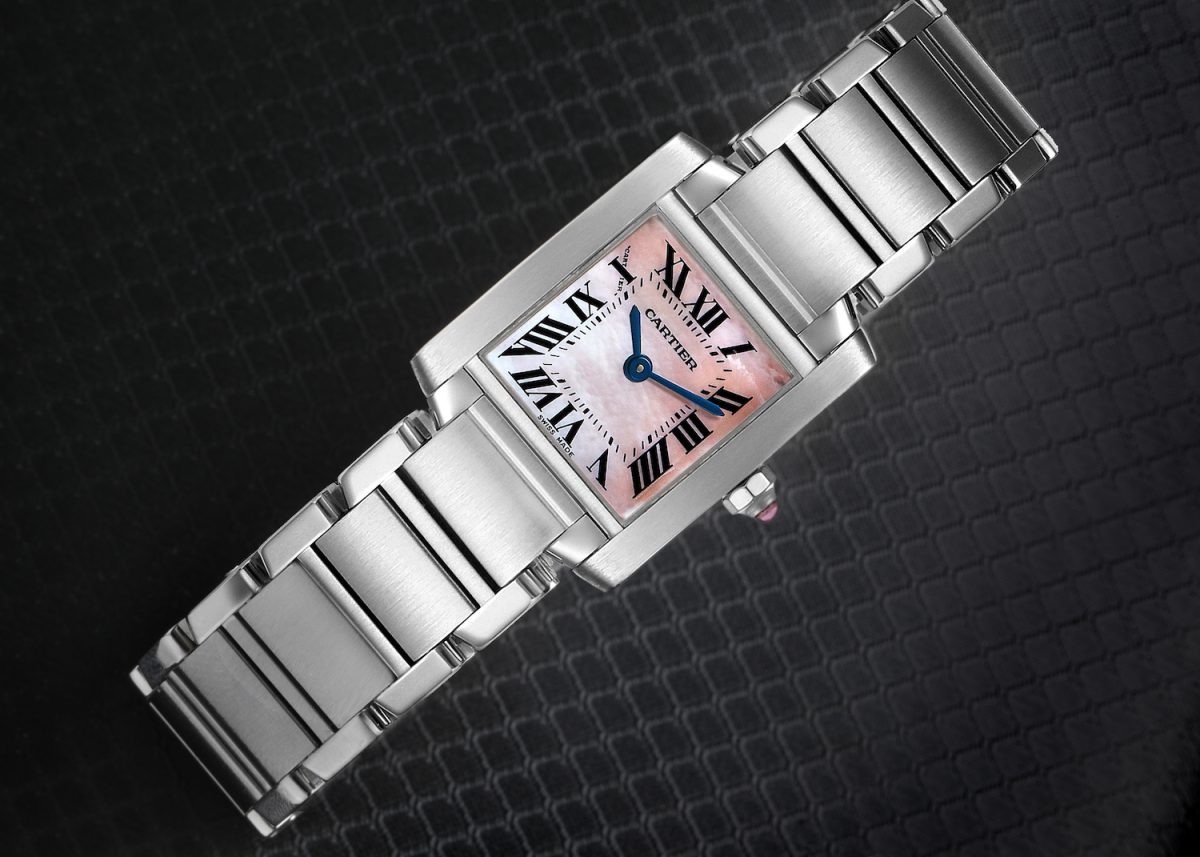 You know a company values its craftsmanship when design and care extend even to the tiniest link for a bracelet. While the first steps in the bracelet making process are entirely done by machine, through the first polish, after that human hands take over.

Each individual link is then painted pink so that the polisher knows what part of the link has been polished and what hasn’t. Their cases undergo the same process for polishing. The final polish of these parts is often done entirely by hand with simple polishing paste. 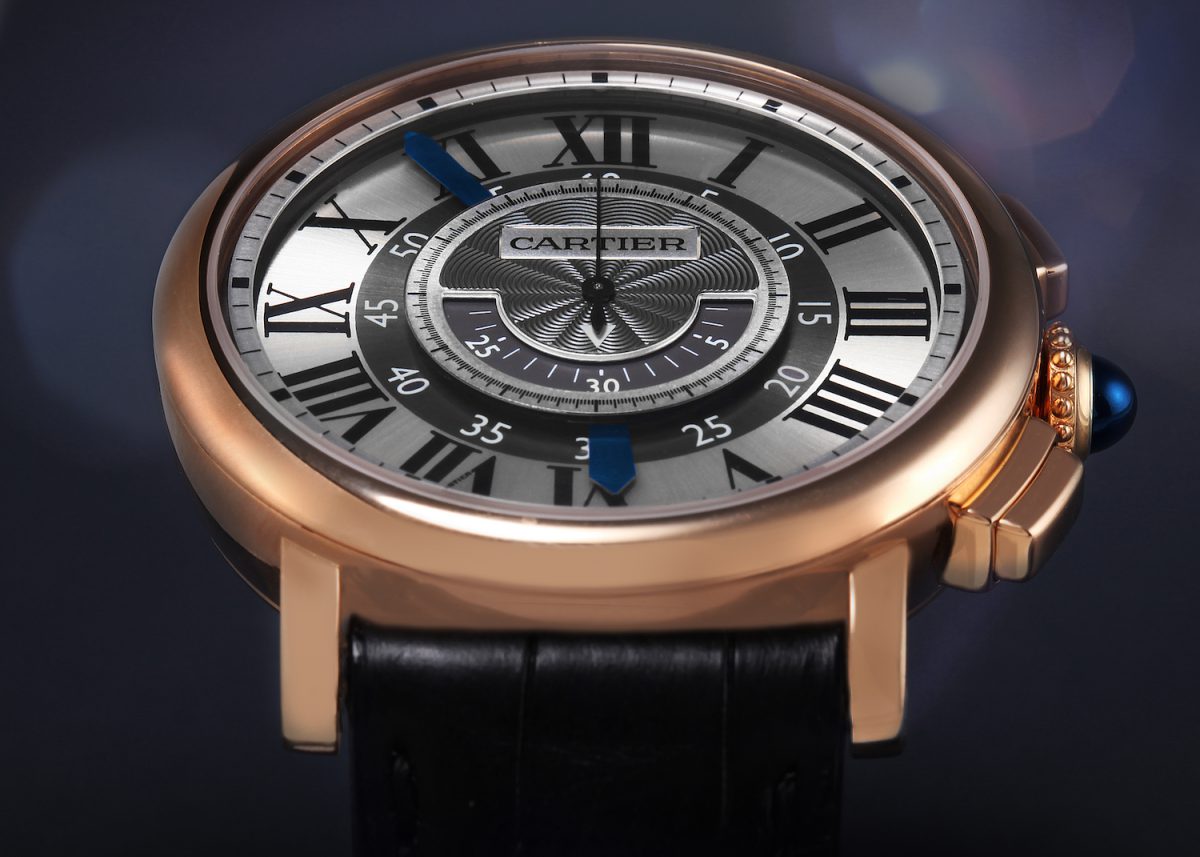 Cartier watches are made in several locations. The most prestigious and sought-after watches, however, are produced in Switzerland at Cartier’s headquarters. These watches carry a special distinction known as the “Geneva Seal” or “Haute Horlogerie.” These iconic timepieces are handmade by master craftsmen who have been trained for many years to produce only the best timekeeping instruments possible. Only a small number of watchmakers are allowed to place this seal on their timepieces. Out of 20 million Swiss watches that are made each year, only around 24,000 of them carry the Geneva Seal.

The laborious process begins when an artisan selects high-quality materials and requires them to be processed by hand before they can be used in a watch movement or case assembly. This ensures that each work of art is unique and will last through generations of use and adoration from enthusiasts around the world who recognize its beauty both inside and out!

Four major steps in manufacturing must take place in Geneva in order for a watch to carry the Geneva seal: assembly, casing up, adjustment, and testing.

The Geneva Seal found on the Cartier movement to the right (photo: Cartier)

The Geneva Seal covers three main areas when it comes to watch production:

Provenance: It guarantees that your watch was made in Geneva. While parts may be sourced from other areas of the world, assembly and casing must have occurred in Geneva.

Craftsmanship: Even the tiniest of screws has been reviewed for defects. All of the pieces must show no machining marks, be polished, and be decorated and finished according to strict specifications. There are a number of regulations that must be followed that include sizes and operation.

Reliability: In 2011 they added rules regarding the finished watch as a whole. The seal now includes exterior parts of the watch, accuracy, proper function, water resistance, and power reserve. 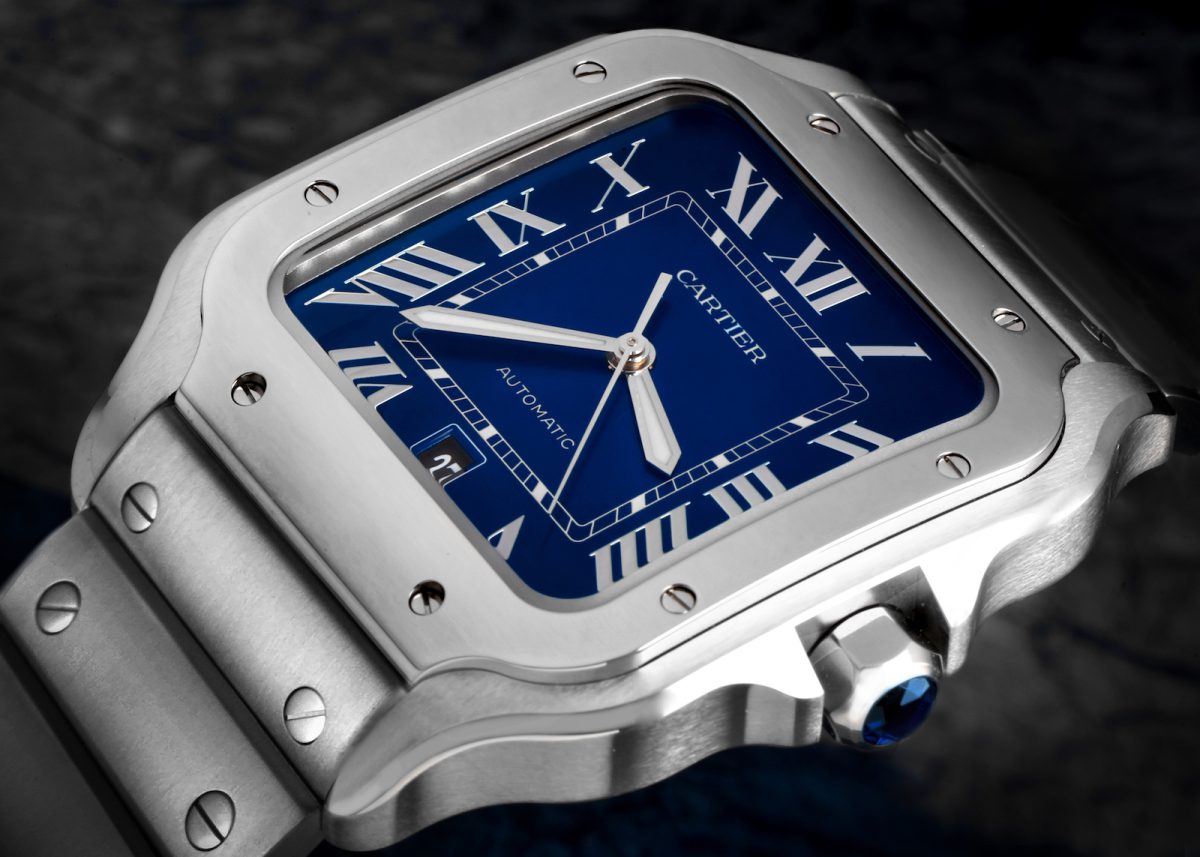 Interestingly, Geneva as a center of haute horlogerie actually came about due to the Protestant Reformation. French Huguenots, during the 16th and 17th centuries, fled religious prosecution through the Jura Mountains and sought refuge in Switzerland (they were Calvinists). Among these people were expert watchmakers who brought their expertise to the workshops in Geneva.

The Calvinists eventually banned overt displays of wealth, like jewelry, so the abundant numbers of goldsmiths found a new living by turning to watchmaking. Even by the late 17th century, Geneva had already become a big force in the timepiece industry with around one-fifth of the residents there engaged in the watchmaking trade.

In 1886, they decided to protect this reputation from poorly made counterfeits that could hurt their business. The Geneva Seal was created not only to protect reputations, but to discourage watchmakers from leaving the city as they had to be residents to place the seal on their timepieces. 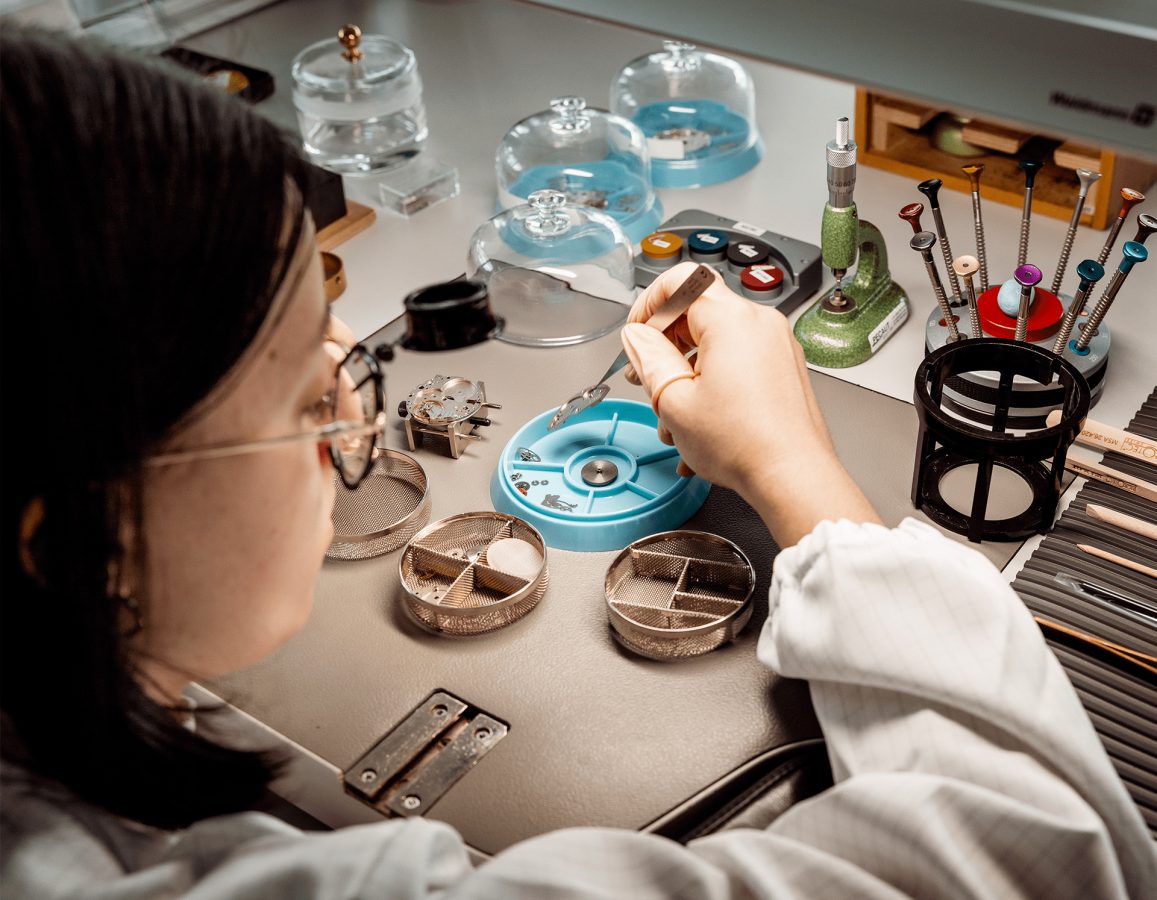 The Couvet manufacturing lab is where some of the most complicated parts of the watch are made. It is also the location where all of Cartier’s watches have been made since leaving Paris.

Hands are initially stamped out of metal, but all the subsequent steps are done by hand. Shaping, polishing, and luminescence of the hands are all completed by watchmaking experts.

This is where all the watches and movements are tested before release for sale. Every watch must meet certain quality standards. Even during development, the watches are tested via digital simulation models, each one taking 48 hours to calculate and run. 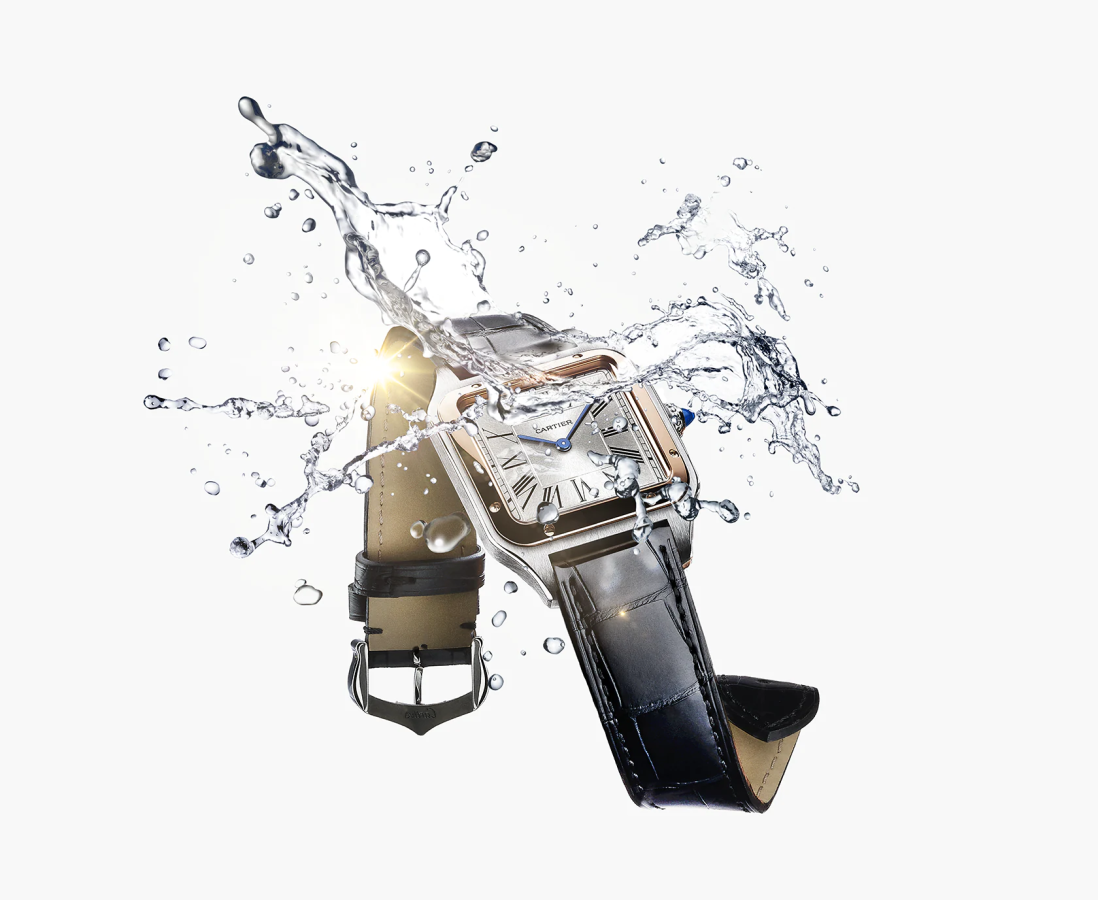 If a prototype is approved, the manufacturing team takes the model and puts it through more than 30 tests which amount to the wear and tear of 10 years of repeated use and wear. Some of these tests and the equipment used were designed in-house at the Maison.

Throughout the manufacturing process, there are more than 100 checks or tests that each watch must pass to continue to the next step. In addition, random checks are conducted as well.

How and Where Cartier Watches are Made

So, there you have it: Cartier watches are made in Geneva, Switzerland. At least they are now. Originally, their exquisite cases were made in Paris, housing movements from other watchmaking facilities. What has not changed are Cartier’s exacting standards in crafting their timepieces.

If you’re interested in wearing a beautiful Cartier piece on your wrist, explore our wide selection of Cartier watches available at SwissWatchExpo.com.