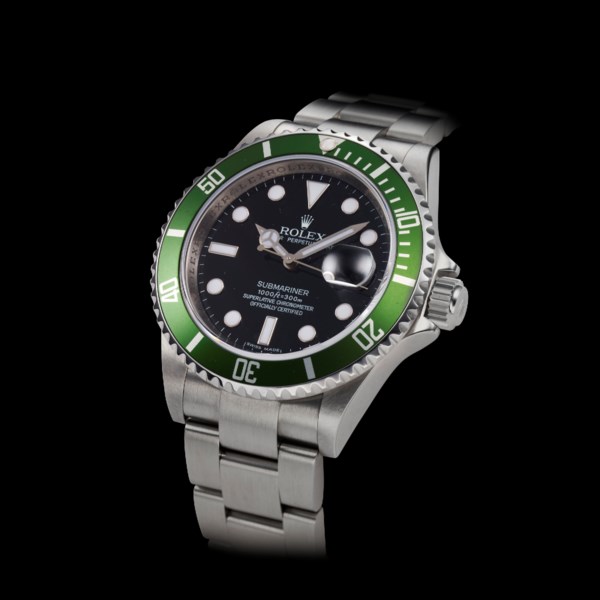 Features of the Rolex Submariner Kermit

Aside from the obvious bezel color and larger dial of the Kermit, these are other features to take note of:

Bracelet – It comes with a hollow link Oyster bracelet made of 904L stainless steel. The solid end links give more heft to the watch, which is characteristic of older Rolex Submariners. It closes with an Oysterlock clasp and incorporates the Glidelock extension system, which allows for 2mm adjustments for a total extension of 20mm.

Movement – It is powered by Rolex’s workhorse movement, the ever reliable Caliber 3135, which appears in most Rolex date models before 2015. It is COSC-certified as a Superlative Chronometer and offers a 48-hour power reserve. It also powers the quick change date, which allows the wearer to change the date manually without having to adjust the central minute and hour hands past 12.

What’s in a name?

The Kermit’s official name in Rolex literature is Rolex Submariner Date ref 16610 LV. The LV suffix stands for “lunette verte” or with vert meaning green and lunette meaning bezel. Rolex affixes two to four letters after their reference numbers to denote the color of the bezel. These come from French words as it is the official language of Geneva-based Rolex.

The nickname “Kermit”, just like all other nicknames given to Rolex watches, are not official, and are monikers given by the watch collecting community. It’s a great way to refer to watches without having to say its full name, and one that has really stuck with Rolex’s sport watches.

A Decade Long Break and the Rolex Hulk

The Rolex Kermit (16610LV) was eventually discontinued in 2010 to give way to another green Rolex Submariner – the green dial and bezeled “Hulk” (116610LV). The Rolex Hulk‘s green-on-green color and heftier case size inspired Rolex fans to name it after the Marvel Comics character.

Aside from the matching sunburst dial and bezel, as well as the new shade of green used, the Rolex Hulk differs from the Rolex Kermit in a few ways. First is the Cerachrom ceramic bezel that replaced the aluminum insert of the Kermit. Second is the “Super Case” with heftier lugs which makes the Hulk appear larger on the wrist despite staying 40mm like the Kermit. 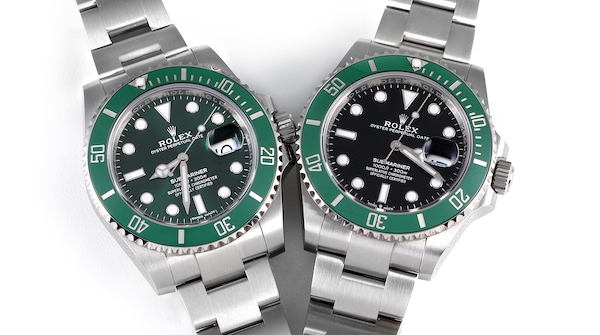 The bracelet on both the Kermit and the Hulk are both Oyster models, but the Hulk was given a newly designed version. It features more robust solid links, while Rolex retained the machined Oysterlock safety clasp which prevents accidental opening, and the Glidelock extension system. This system is a common characteristic of diver’s watches, as it allows the wearer to adjust the bracelet and put it over a dive suit. The Glidelock allows for an increase of 2mm increments, up to roughly 20mm, without having to use any tools.

The Rolex Hulk was produced from 2010 until 2020. It was discontinued by Rolex to make way for the new generation of Rolex Submariner watches with 41mm cases – a first in the Submariner’s almost seven-decade history.

Modern Upgrades to the Kermit II or Starbucks

The new Rolex Submariner Kermit 126610LV, together with the new generation of 41mm Submariners, are equipped with streamlined cases that recall pre-Super Case Submariner models. The lugs flow more closely to the wrist, in contrast to the bulkier feel of the Super Case.

The bracelet, meanwhile, was increased from 20mm to 21mm but despite this, the new Submariner still feels smaller on the wrist. Small changes did indeed make a difference. 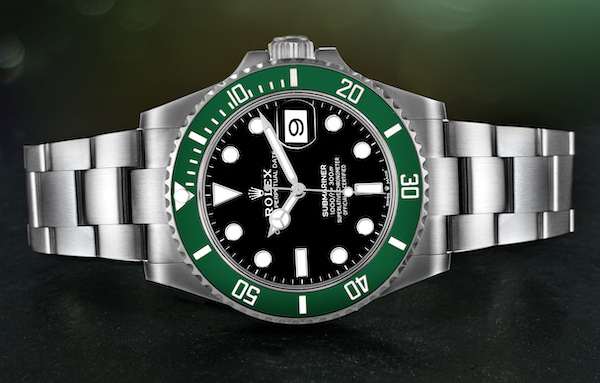 The movement is where the new Rolex Submariner 41mm brings the most important evolution. Rolex’s long-lasting and reliable Caliber 3135 finally got an upgrade with the 3235 – this time with a Chronergy escapement that gives 15% more efficiency, and an improved accuracy of -2/+2 seconds per day. Altogether, these provide a 70-hour power reserve, increased from 48 hours.

When it comes to Titanium dive watches, the Omega

The Cartier Santos Dumont was created by Louis Car