The Omega Seamaster collection is home to water-resistant watches that are built for the active lifestyle. Introduced in 1948, the Seamaster is the brand’s first family of watches, and is today its longest-running collection. 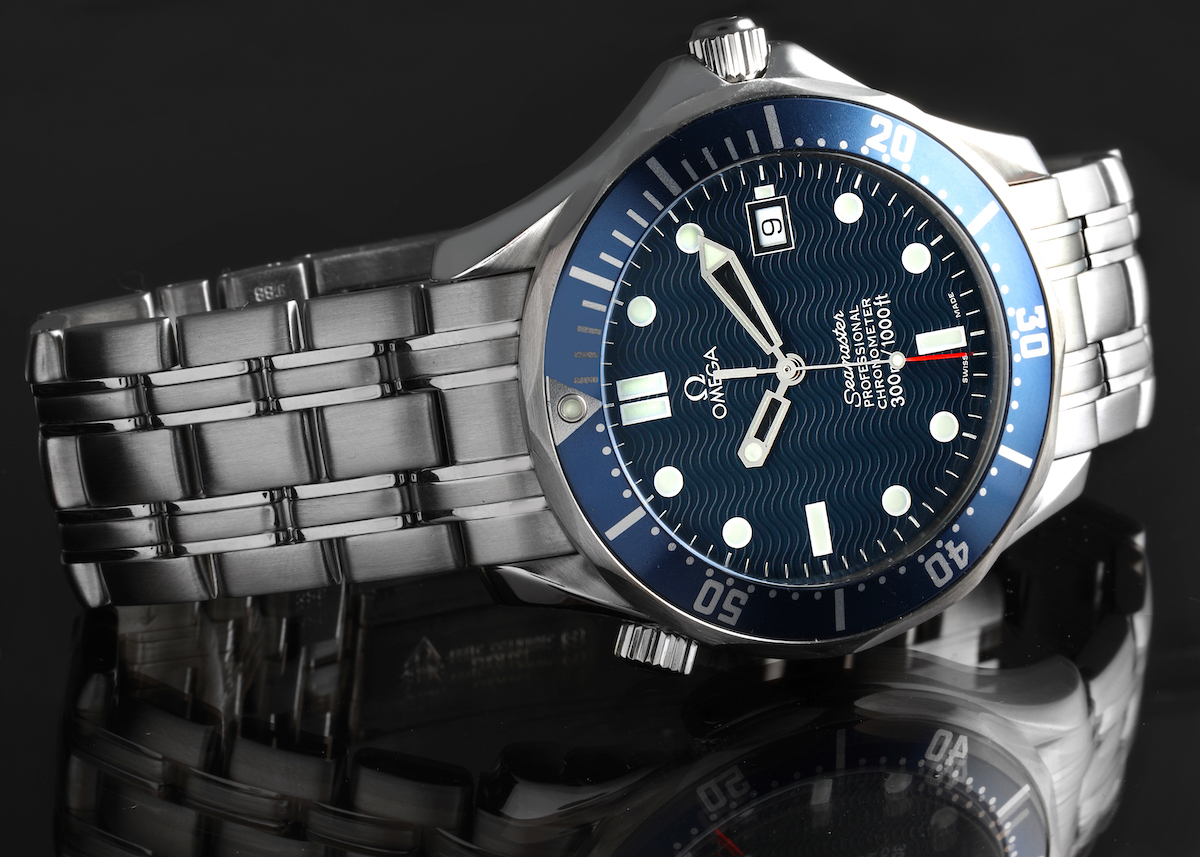 About the Omega Seamaster

The Omega Seamaster is the longest-running collection still being produced by Omega. Introduced in 1948, it was Omega’s answer to water resistant watches that were growing in number at the time.

In its 70-year history, the Omega Seamaster has grown to include anywhere from sophisticated dress watches to heavy-duty solid steel divers.

Here are the important milestones in the history of the Omega Seamaster.

1932 – Omega’s diving heritage begins when they debut the Marine, the world’s first commercially available dive watch. Tested to withstand sub-aquatic depths, the Marine was worn by Yves Le Prieur, the inventor of the modern scuba mask and tank; and explorer Charles William Beebe, who wore it while riding in a bathysphere.

1948 – The first Seamaster model is introduced to celebrate Omega’s 100th anniversary. Its design was loosely based on watches made for the British Royal Navy towards the end of World War II. Back then, most watches weren’t water resistant yet, and were extremely susceptible to water damage, even from daily activities like handwashing. The Seamaster was created to address this need. 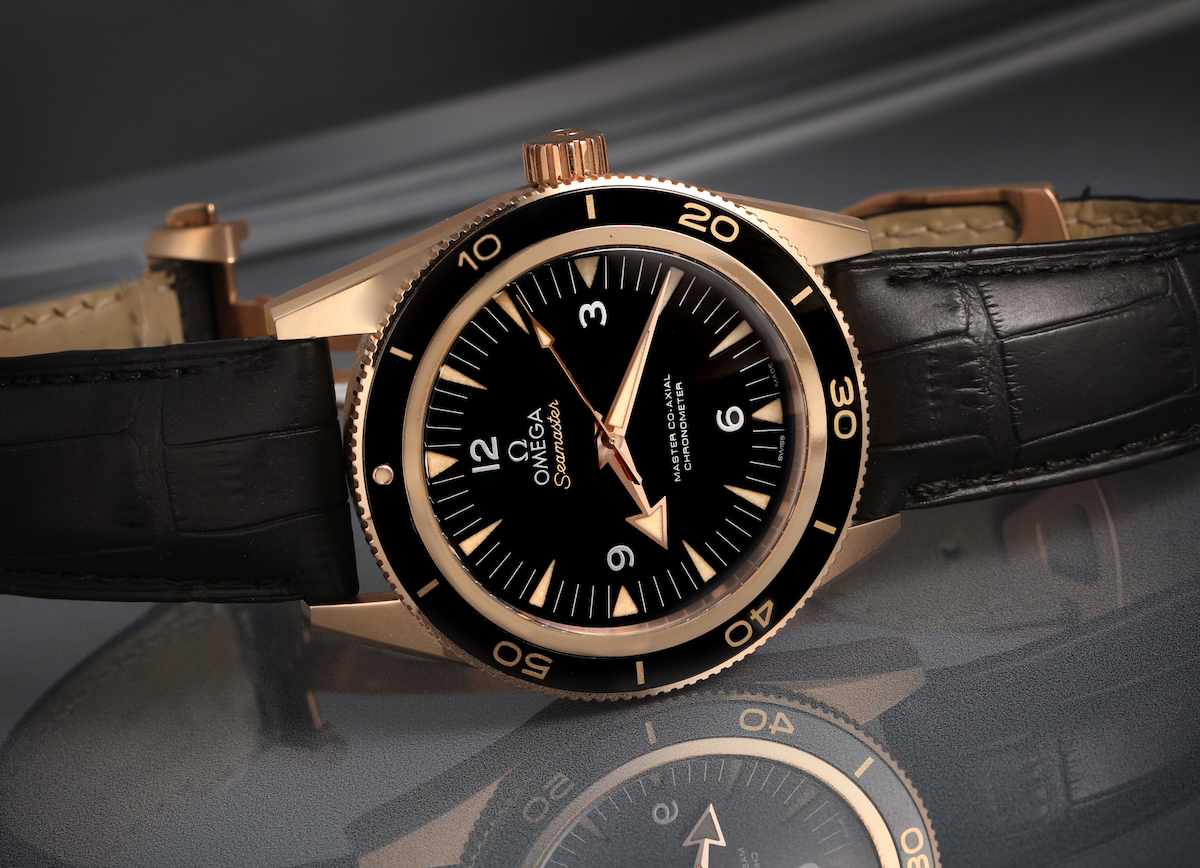 1957 – Omega capitalizes on the popularity of tool watches and releases their own set of “professional” watches. Dubbed the 1957 Trilogy, each of the three watches catered to a specific purpose – the Seamaster for diving, the Speedmaster for racing, and the Railmaster for anti-magnetism.

1958 – Omega launches the Seamaster 300. It was the brand’s first dedicated dive watch, which in a bit of a misnomer, had a depth rating of 200 meters. It eventually gained a reputation as a true tool watch, and accompanied renowned explorer Jacques-Yves Cousteau on his Red Sea expeditions.

1970s – Omega launches the “PloProf” or Plongeur Professional family, consisting of the Seamaster 600 and Seamaster 1000 – thereby doubling and eventually tripling the water resistance of Omega watches.

1971 – Omega introduces the Seamaster Plongeur Professional or “PloProf”, a cutting-edge watch that was worn by professional divers and used by French diving company COMEX.

1990s – a major marketing move contributed a surge in the Omega Seamaster’s popularity. The Seamaster Diver 300M was featured on the wrist of Pierce Brosnan, when he played 007 in the 1995 film GoldenEye. The Seamaster became the official watch of James Bond, and the ties to the Bond film franchise continue until today.

Beginning in this decade, Omega also demonstrated that its classics can be reinvented. They began to introduce clever tweaks and line extensions that revive Seamaster models from the previous decades, such as the Seamaster 300, the PloProf, and the Seamaster 1948.

Today, the Seamaster product range encompasses a broad number of styles, suitable for every situation.

The Omega Seamaster collection has a wide array of watches, all suited for active lifestyles. Its models range from splash-proof dress watches, to robust and high-tech professional diver’s watches. Here are the current models under the Omega Seamaster line:

The Omega Seamaster Diver 300M is a professional diving watch. It offers a water resistance rating of 300 meters, and features a helium escape valve on its case, allowing it to be used for saturation diving applications.

Some of the Seamaster Diver 300M’s key features are the scalloped bezel, helium escape valve at 10 o’clock, and skeletonized sword-shaped hands. Many models also feature a wave pattern on the dials. Current production models have switched to ceramic bezels (from aluminum) and ceramic dials with laser-engraved waves.

This collection was made truly famous when Pierce Brosnan wore a quartz Seamaster 300M in the 1995 Bond movie, GoldenEye. His blue Seamaster 300M became the emblematic Seamaster, most recognized for its blue bezel and blue wave dial. 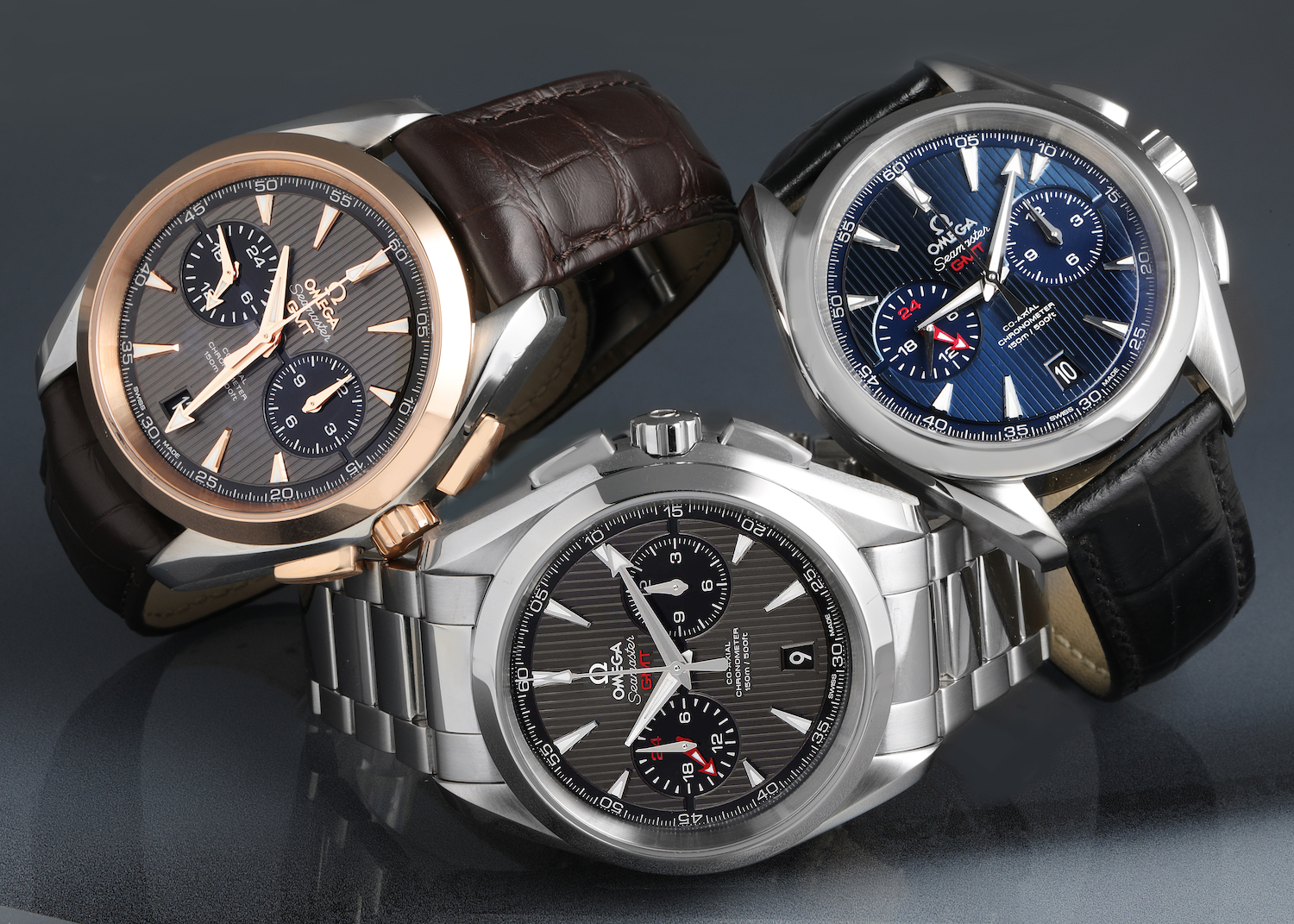 The Omega Seamaster Aqua Terra is a cross between a dress watch and a sport watch, with a water resistance rating of 150 meters. The key features of the Aqua Terra include smooth round cases, smooth bezels, and teak pattern dials with horizontal or vertical grooves that mimic the wooden decks of luxury yachts.

Aside from the standard time and date models, the Aqua Terra line also has time-only styles, as well as more complicated models like GMTs, annual calendars, day-dates, and world timers.

The Omega Seamaster Planet Ocean is a line of professional diver’s watches that are larger than the 300M, and twice as water-resistant with its 600-meter depth rating. It also features a helium escape valve, a unidirectional bezel for measuring diving time, and bright luminous hands and indices for maximum visibility underwater. The Planet Ocean collection offers three-hand editions, chronographs, and models with a GMT function. 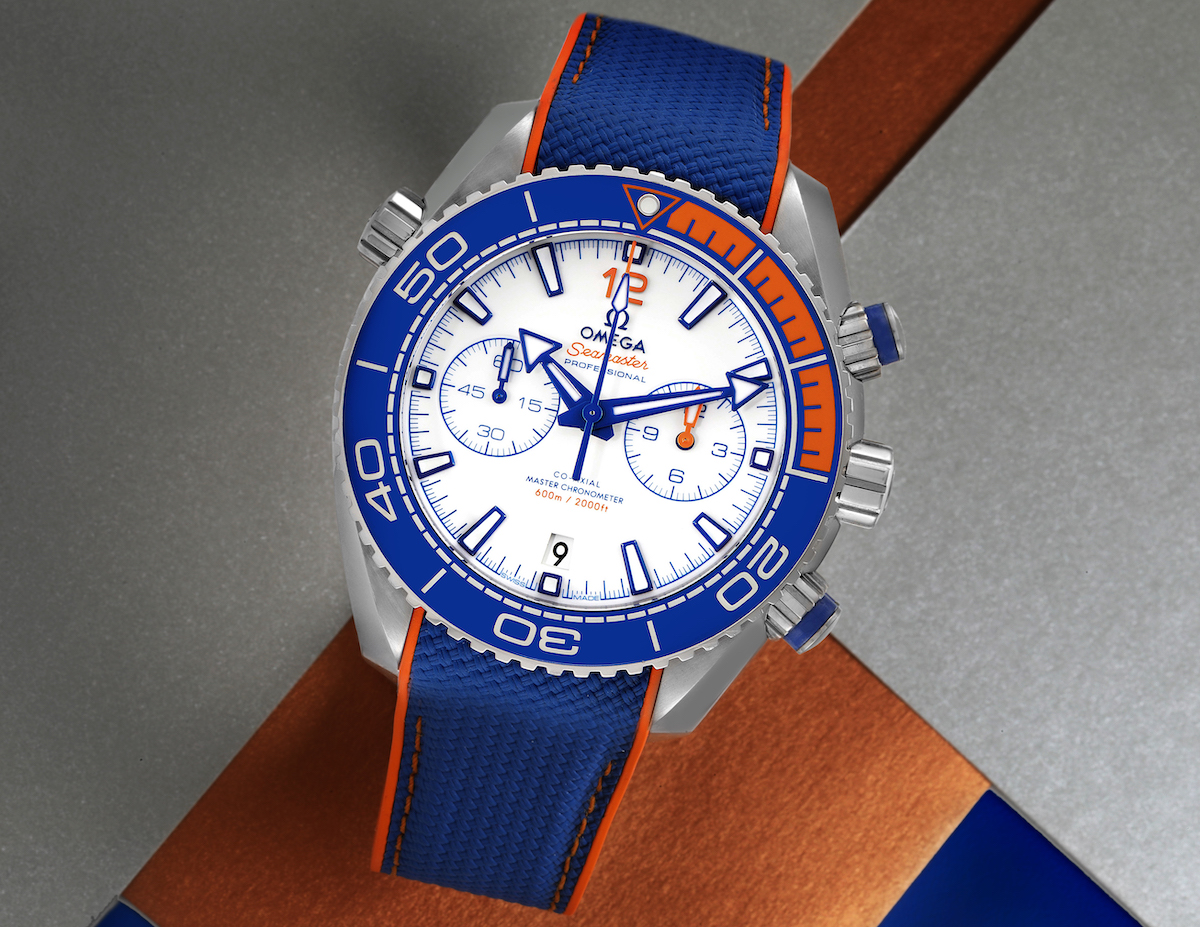 The Omega Seamaster Heritage collection is the brand’s vintage playground. This line features re-editions of vintage Seamaster models with modern enhancements and movements.

OMEGA SEAMASTER 300 – The Seamaster 300 harkens back to the vintage Seamaster introduced in 1957 — the brand’s first diver’s watch. It features a rotating bezel, a black dial with aged-looking lume, and a 300-meter depth rating.

OMEGA SEAMASTER PLOPROF – The Seamaster Ploprof is the modern reincarnation of the PloProf watches from the 1970s. The name is derived from Plongeur Professionnel, meaning “professional diver” in French. These watches are massive at 55mm, have their crown on the left side, and the crown guards integrated to the case. The current models are water resistant up to 1200 meters, and feature mesh bracelets. 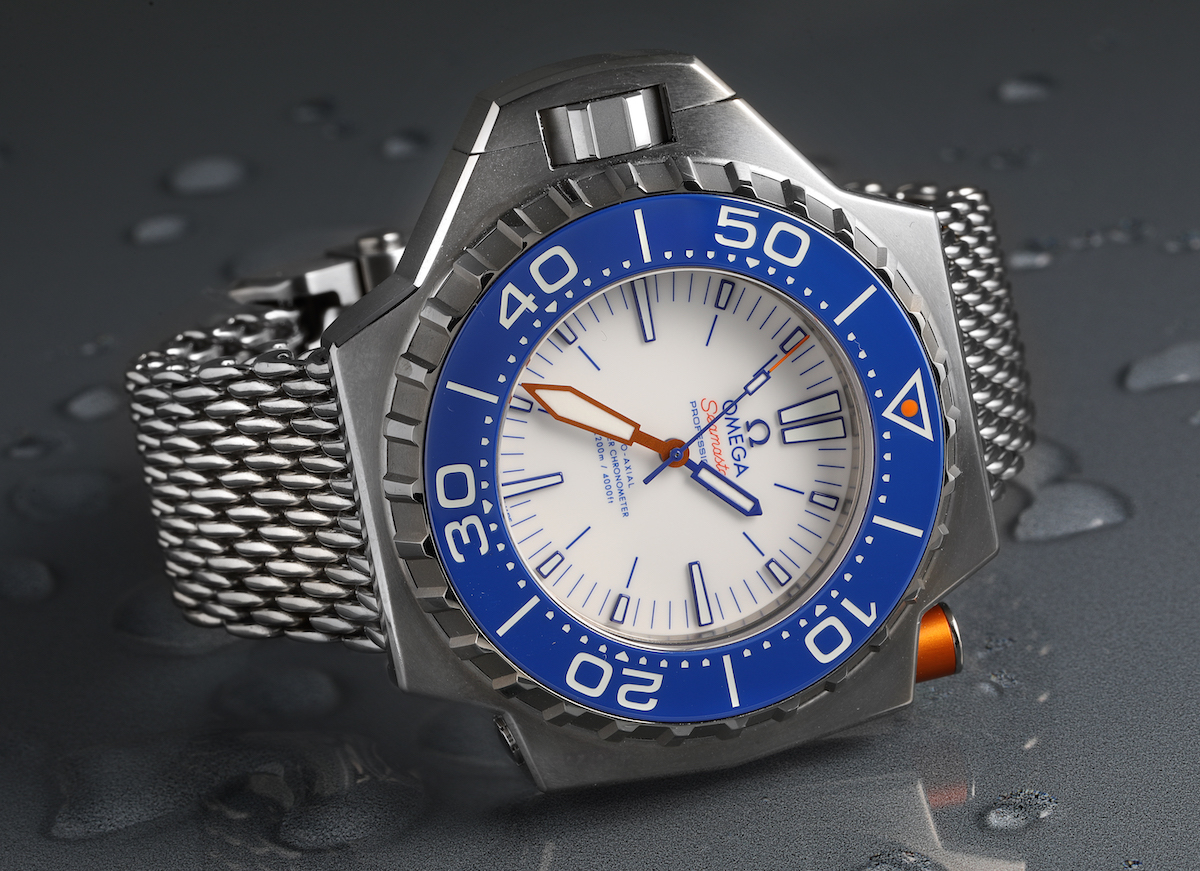 OMEGA SEAMASTER BULLHEAD – The Seamaster Bullhead is a modern take on a 1969 model. As its name suggests, it features a distinctive case reminiscent of a bull’s head. Its winding crown and chronograph pushers are located above the case at 12 o’clock, and it features an additional crown at 6 o’clock to control the internal rotating bezel.

OMEGA RAILMASTER – The Railmaster is part of the three-piece collection introduced in 1957, better known as the “1957 Trilogy”. Especially developed for the scientific community, it has always featured anti-magnetic properties. Today its magnetic resistance is up to 15,000 gauss. What sets it apart from other anti-magnetic models, aside from the high level of anti-magnetism, is that it protects the movement without a using a soft iron cage.

OMEGA SEAMASTER 1948 – The Seamaster 1948 is a faithful reissue of the very first Omega Seamaster model. By today’s standards, its design is closer to a dress watch, with a polished bezel, silvery opaline dial, and a leather strap.

The Omega Seamaster collection includes a very wide range of models – from splash-proof everyday timepieces to robust and high-tech dive watches. Here are essential Seamaster models that you’ll want to know about. 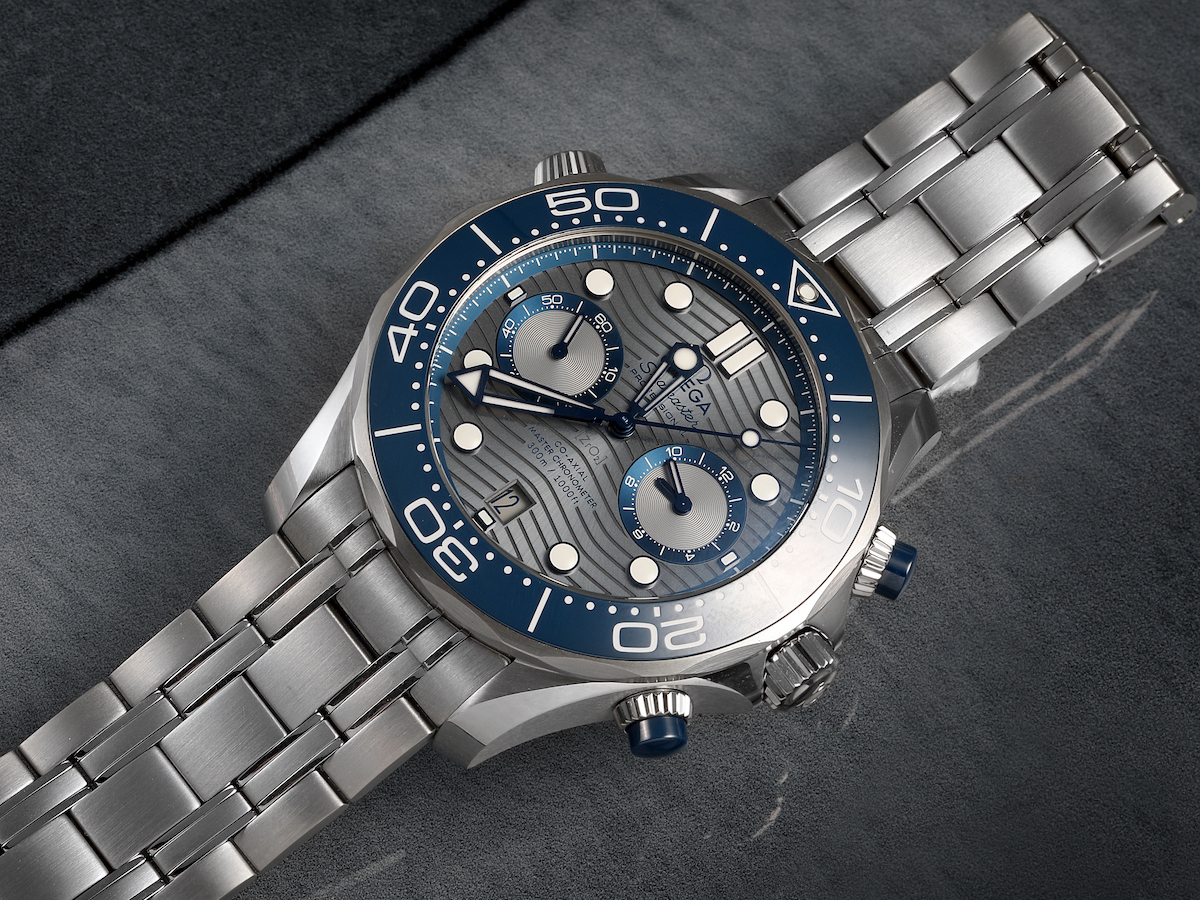 For the 25th anniversary of the Seamaster 300M Diver in 2018, Omega returned to the wave pattern dial and added some modern touches – most notably, dials made of polished ceramic.

From the finer pattern of the wave dial we’ve seen from the 2000’s, the waves are now laser patterned. We also find the date aperture on the 6 o’clock position, instead of at 3 o’clock, adding symmetry to the watch.

The movement was also replaced by the in-house Caliber 8800 and 8801 (and 9900 for the chronograph version). These movements have received the Master Chronometer certification, which means that it performs according to much stricter requirements than previous chronometer-certified watches. 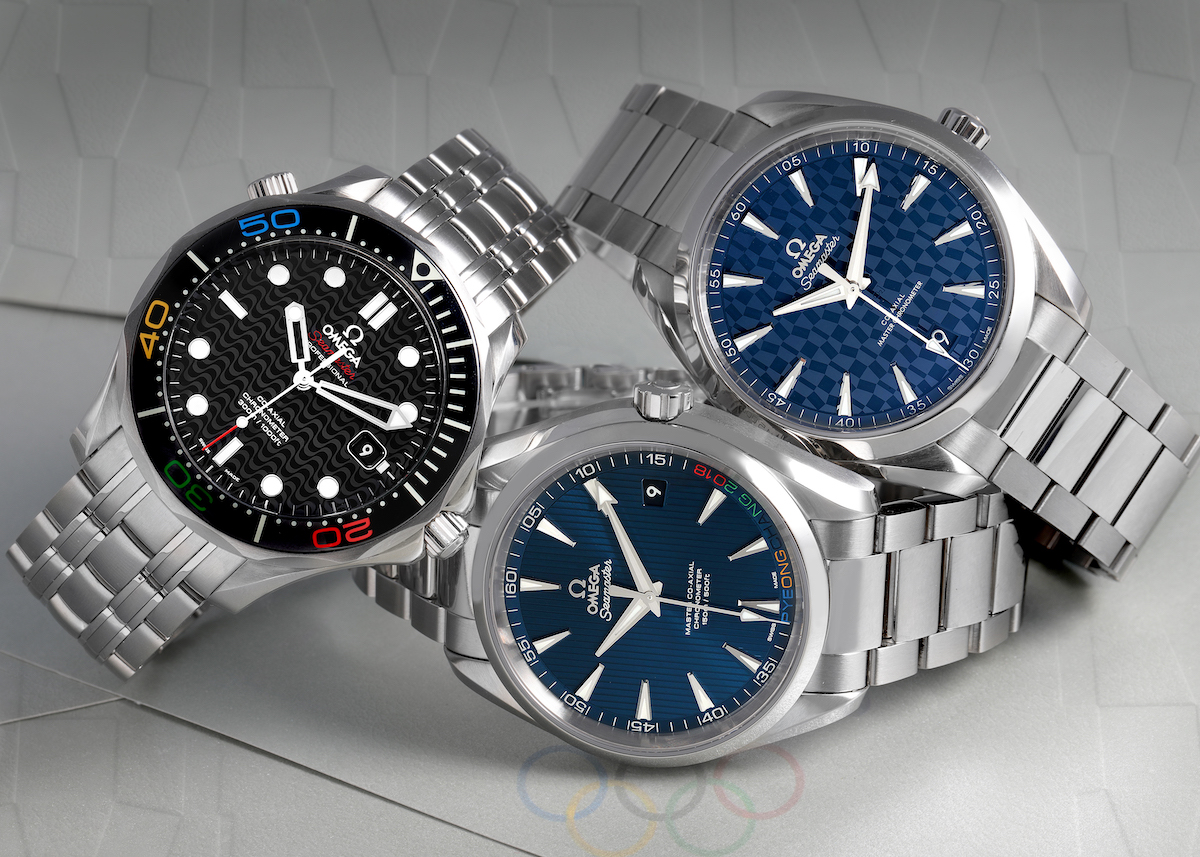 
No other brand has been more actively involved in sports timekeeping. Omega has been timing the Olympics since 1932; and in 2020, completed their 29th turn in the role.

In keeping with tradition, Omega presents special edition watches dedicated to this major sporting event. Omega’s wonderfully creative designs echo the theme of each Olympic event, and honor the culture of the host country, making them highly collectible models. 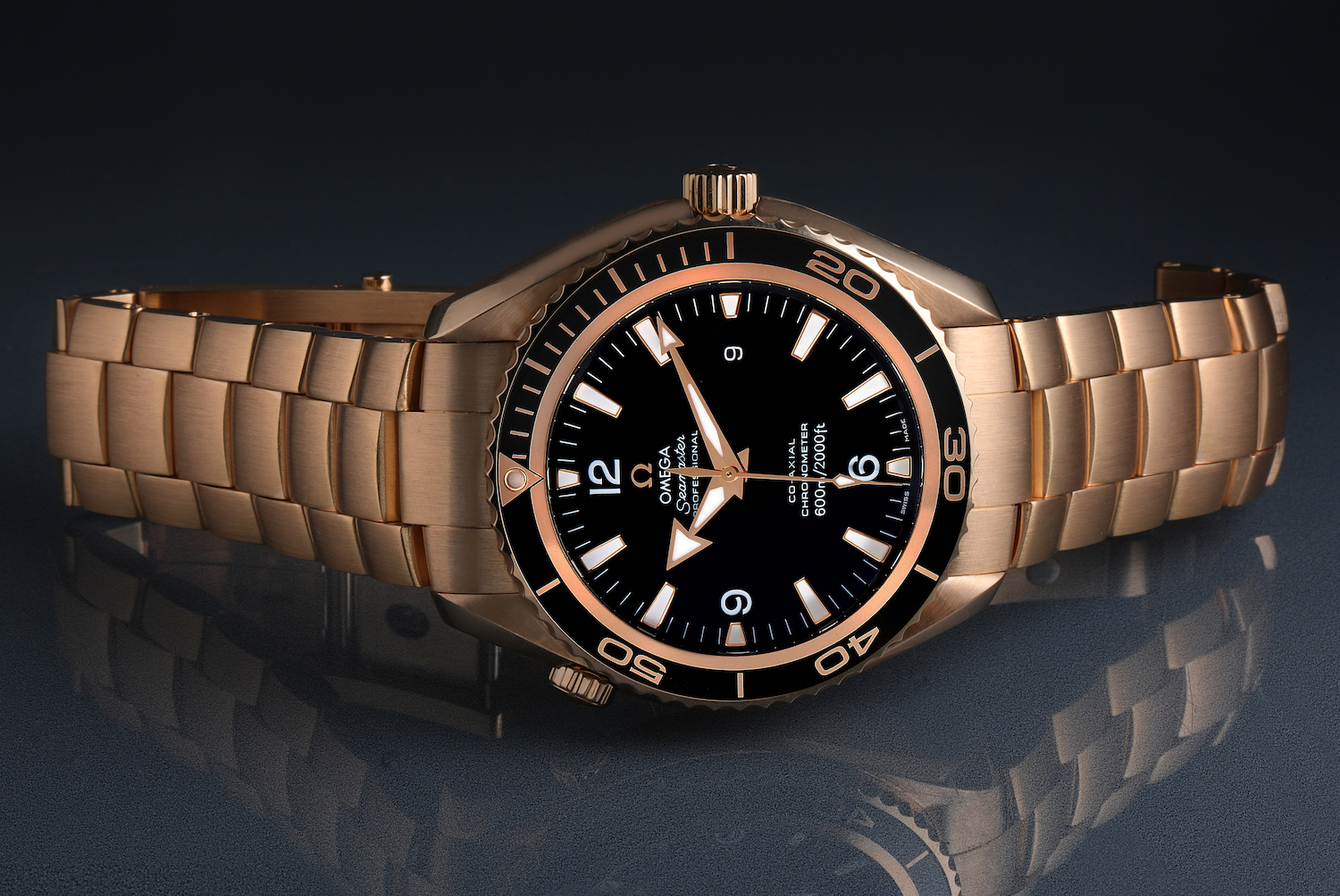 Common Questions About the Omega Seamaster

The Omega Seamaster is a wide-ranging line of water-resistant watches, and is Omega’s longest-running collection. Here are answers to the most frequently asked questions about the Omega Seamaster.

WHAT IS AN OMEGA SEAMASTER?

The Omega Seamaster is a family of watches with water-resistant qualities. It offers a vast range of styles, including splash-proof casual and dress watches, robust professional diver’s watches, and vintage recreations. 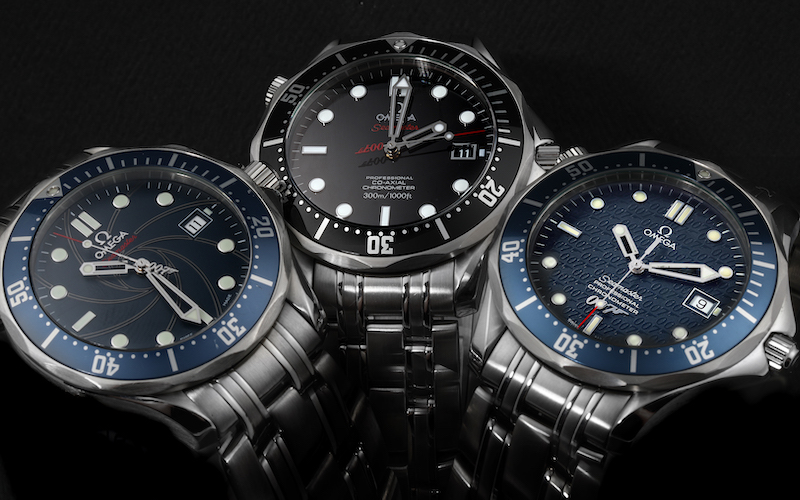 HOW CAN I TELL IF MY OMEGA SEAMASTER IS REAL?

Omega is one of the foremost watch brands in the world. They are known for their exquisite watchmaking, with their portfolio composed of functional and complicated watches that don’t sacrifice quality or style. Omega watches are crafted to the highest standards, so any sign of poor quality means it’s likely a fake.

Obvious giveaways are spelling or engraving mistakes, unfinished parts, and features that don’t belong to the specific model that you are looking at.

Before you buy your luxury watch, it is crucial to do research on your chosen model and reference. Familiarity with your chosen watch’s details will help you more easily spot a fake. At SwissWatchExpo, we always tell clients that the best defense against buying a fake timepiece is to get your watch from a reputable and trusted dealer, who can provide a guarantee of authenticity on the watch.

HOW OFTEN SHOULD AN OMEGA SEAMASTER BE SERVICED?

A watch’s service frequency depends on how it is used and stored, and the environment in which it is worn. Water resistance, for example, can be affected by old gaskets or by accidental shocks. Omega recommends that you have the water resistance checked once a year, and have a complete service performed every 5 to 8 years. There can be signs however, that your watch needs maintenance sooner rather than later. Here are Signs It’s Time for Watch Maintenance.