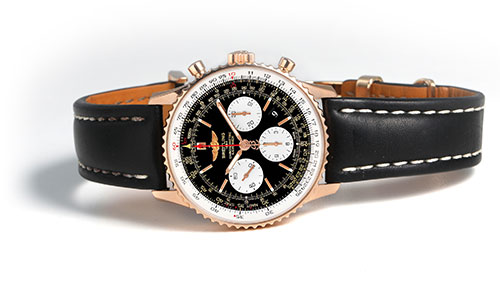 The Breitling Navitimer is the brand’s most successful collection. Created for the use of pilots, its name comes from the combination of the words “navigation” and “timer”. It is widely recognized for its iconic slide rule, which enables pilots to access crucial calculations for a safe and well-controlled flight. The Navitimer has been the choice watch of companies like Boeing and groups like the Aircraft Owners and Pilots Association. Today, it is beloved by watch collectors, new and seasoned, male and female alike. Explore our collection of Breitling Navitimer watches at SwissWatchExpo.com. 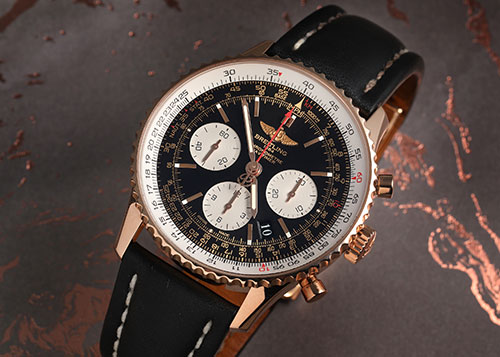 The Breitling Navitimer is the brand’s flagship model and one of the most iconic pilot’s watches ever made. So recognizable is the Navitimer that when one thinks of a Breitling watch, its circular slide rule bezel always comes to mind.

Introduced in 1952, the portmanteau of “navigation” and “time” reveals its reason for being. It was made to help pilots compute for speed, flight times, fuel consumption, and wind impact among other calculations, and to do so conveniently during flight. Over the years, the Navitimer family has undergone a vast series of interpretations – from chronographs to time only models and a wide range of movements.

Beyond its many functions, the timeless design of the Navitimer also helped it find its way to the mainstream, counting pop culture icons such as Jerry Seinfeld, Gordon Ramsay, and John Travolta as fans. While flight calculations can now be made digitally, the Breitling Navitimer’s readable design and high-performing calibers makes it a choice timepiece for today’s modern life. Explore our Breitling Navitimer collection at SwissWatchExpo.com.

A BRIEF HISTORY OF THE BREITLING NAVITIMER

Introduced in 1952, the Breitling Navitimer was the Swiss watchmaker’s call for a “wrist instrument” designed for aviation. Willy Breitling, then president of the company, was approached by the respected US Aircraft Owners and Pilots Association (AOPA) to design a new aviation watch for its members.

The timepiece had the daunting task of helping pilots perform all necessary flight calculations, even while being worn on the wrist. During this time, computing for flight statistics needed a logarithmic slide rule. Willy Breitling’s idea was to integrate it into a rotating bezel surrounded by small beads that make for easier handling. It became an instant success among AOPA’s members.

The first Breitling Navitimer edition was the ref 809, which was initially offered exclusively to AOPA, and in 1956 was made available to the open market. Now considered highly collectible, most of these models were powered by the Venus 178 caliber, while some get their power from the manual Valjoux 72, which you’ll find in some vintage models of the Rolex Daytona.

In 1969, Breitling switched the Navitimer’s movement to the Caliber 11, which caused pivotal changes for the model. Caliber 11 was a modular, automatic chronograph movement with an integrated micro-rotor. This meant having to change the Navitimer’s crown to the left, leaving the pushers to the right; and also giving it a tri-compax layout as opposed to its previous bi-compax one.

When the Quartz Crisis of the 1970s hit, Breitling experienced financial difficulties much like the rest of the Swiss watch industry. To stay afloat, they even released an LED digital version of the Navitimer, which had dismal sales.

When Breitling went under during this time, the Navitimer continued to be produced, but signed with “Sinn”, after the German watchmaker Helmut Sinn, a specialist in pilot’s watches, who bought the rights to the Navitimer stock and name when the company fell on hard times.

Out of the ashes of the old company, Breitling Montres S.A. was born. Their first few years were spent riding the electric revolution and developing quartz watches, but once the Quartz Crisis ended, mechanical watches followed. In 1986, they introduced the Breitling Navitimer.

In 2009, Breitling released their first ever in-house movement, the Breitling B01, at the heart of the Navitimer. Since then, more advanced versions have been developed, such as the B04 (GMT function), B05 (world time function), and the manual caliber B09, which was used in the re-edition of the ref 809.

There’s also the B02, which is a three-hand movement based on the Tudor MT5612, and the B03 rattrapante movement which measures two elapsed times simultaneously. In non-chronograph automatic models of the Navitimer, one will find the B17 movement inside. All of these calibers are COSC certified and offer a power reserve of nearly 70 hours.

Regardless of the movement or model, all Breitling Navitimer watches boast the distinct design that pays homage to the brand’s rich aviation heritage.

ABOUT THE BREITLING NAVITIMER COLLECTION

The Breitling Navitimer is the brand’s most successful model and a true industry classic. From its beginnings as an aviation watch, the Navitimer now has a full range of purpose-built timepieces with various functions. Here are the sub-collections under the Navitimer family of watches:

Breitling used basic movements from various Swiss manufacturers such as Valjoux and ETA SA up until 2009, and the price of early Navitimer watches are heavily determined by the movement within. Collectors and enthusiasts are particularly interested in models from the 1950s and 60s, including the inaugural reference 806. Most of these watches run on the Venus 178 and the rare Valjoux 72. Hand-wound ETA movements were also used in the following decades.

By the 1960s, Breitling had already introduced the automatic Navitimer, which runs on the famed Chronomatic movement developed by a consortium including Willy Breitling, Jack Heuer, and Hamilton-Buren. In the 1990s, the popular Valjoux 77 was added to the Navitimer’s family of automatic movements.

The current Breitling Navitimer collection is composed of models that still possess the overall design language of the original from 1952, this time with Breitling manufacture movements.

This tribute to the original Navitimer is smaller in diameter at 41mm. Available in steel and gold, dials come in black, blue, or silver, with tone-on-tone registers. The famous slide rule is still present, powered by the bidirectional rotating bezel. Inside runs the self-winding caliber Breitling 13 which is chronometer-certified by the COSC.

Made for travelers, this chronograph adds a GMT hand for reading a second time zone, in addition to basic Navitimer features such as the 12-hour chronograph. It comes with an imposing 48mm case size and a highly legible ‘instrument panel’ alongside the famous slide rule bezel. This model is offered only in stainless steel, with options of silver, black, or panda dials. It is powered by the Breitling Caliber B04 with an entirely crown-adjustable dual timezone system.

It was in 2009 that Breitling introduced its first ever in-house movement, the B01. While Breitling watches have all been COSC-certified, they have mainly used ETA movements until the B01 - a result of research and development by Breitling since 2004. Today, the Breitling B01 movement is used in several of their collections and has achieved quite an iconic status.

The Breitling B03 movement powers this take on the original Navitimer and the split-seconds chronograph function. It is the first time that the manufacture has made a rattrapante complication in house, and they also equipped it with a special isolating mechanism to preserve energy.

Breitling marked the 60th year of the Navitimer with this re-issue of the original ref 806 from 1959. It stays true to the inaugural model to the smallest detail, but some improvements were added: water resistance was increased to 30m, and the dial features Super-LumiNova coating for added legibility. In respect to the manual caliber that powered the original, they developed the manual wound Breitling Caliber B09 for this watch. There are 1959 units available for this model, all individually numbered and engraved on the case back.

The newest collection of timepieces in the Navitimer line does away with the chronograph function, while keeping the iconic slide rule bezel. Created as an everyday watch with mass market appeal, this line offers a wide range of sizes – from the initial 38mm, Breitling has added a 41mm version in 2019; and finally a 35mm ladies’ version in 2020. Navitimer 1 Automatic watches come with a choice of a stainless steel case and bezel or a combination of stainless steel and 18k red gold, and a variety of dial colors. Inside beats the Breitling 17 movement.

Breitling uses a 12-digit reference number to properly document their sale and manufacture. Each digit provides information about the watch’s type, design, movement, and certification as follows:

COMMON QUESTIONS ABOUT THE BREITLING NAVITIMER

WHAT IS A BREITLING NAVITIMER?

The Breitling Navitimer is the brand’s flagship collection. Built especially for pilots, its name comes from the combination of the words “navigation” and “timer”. It is characterized by its iconic slide rule, which enables pilots to compute for crucial calculations for a safe and well-controlled flight. When it was launched, the Navitimer was the choice timepiece of companies like Boeing and groups like the Aircraft Owners and Pilots Association.

Since its introduction in 1952, Breitling has created numerous versions of the Navitimer chronograph. These include added complications like the GMT, rattrapante, and perpetual calendar functions. In 2018, Breitling introduced the time and date only Navitimer 1.

HOW OFTEN DO YOU NEED TO SERVICE A BREITLING?

Breitling recommends a maintenance service every 2 years, which should include: checking movement parameters and watch functions, changing all seals, checking water resistance, cleaning the case and metal bracelet; changing the battery for quartz watches.

They also recommend a complete service every 4 to 6 years, which would involve a complete disassembly of the watch, and cleaning and exchange of standard movement parts.

These are just recommendations, as there can be signs that your watch needs to be checked sooner rather than later. Here’s our guide on Signs It’s Time for Watch Maintenance.

DOES THE BREITLING NAVITIMER HOLD VALUE?

The Breitling Navitimer range offers a combination of a timeless design, rich heritage, and impeccable craftsmanship that make them valuable to collectors. People will continue to invest in them due to these qualities, and with steady demand comes a firm grip on value.