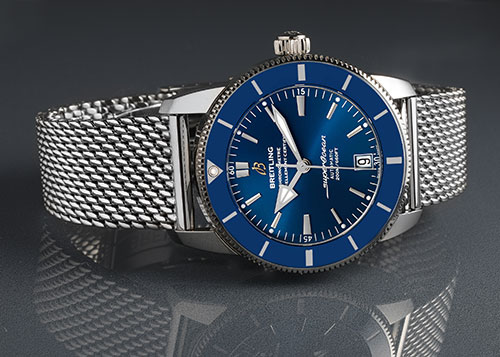 The Breitling Superocean is the brand’s dedicated line of watches for diving and water sports. After honing their expertise in aviation watches for years, Breitling successfully broke into the world of dive watches in 1957, just as deep-sea exploration and underwater sports gained popularity.

Over the years, the Breitling Superocean line has evolved into a comprehensive collection of watches, catering not only to those who explore the deep seas, but also those whose interests are a little closer to the shore. Designs also range from heritage-inspired pieces to contemporary and high-technology models, paying homage to Breitling’s rich diving legacy while constantly improving with time.

Aside from having robust build and impressive water resistance, Breitling Superocean watches are also sporty, colorful, and boldly designed, catering to the new generation of explorers who seek both performance and style.

Explore our collection of Breitling Superocean watches at SwissWatchExpo.com.

A BRIEF HISTORY OF THE BREITLING SUPEROCEAN

Since its inception in 1884, Breitling was focused on creating precision-made chronometers for aviation and military purposes. By the 1950s, professional deep-sea diving, scientific exploration of the seas, and water sports began to flourish, creating demand for water resistant timepieces.

Omega broke its first diving record with the Seamaster, which reached depths of 62 meters; then Rolex debuted the Submariner in 1953, with a higher depth rating of 100 meters.

Come 1957, Breitling was ready to put their dive watch stakes on the ground. They introduced not one, but two dive watches under the newly created Superocean line. Both had a depth rating of 200 meters, beating out their contemporaries.

One was the elegant ref 1004, a time-only diver suitable for daily wear; then the ref 807 chronograph, for the more seasoned diver who needs a watch to regulate saturation time. Aside from boasting 200m water resistance, they also stood out from the rest of the dive watches in the market, with their minimally designed and extra legible dials and bezels.

These two would pave the way for more advanced Superocean models – from automatic to deep-dive models.

In the 1960s, the Breitling Superocean 2005 was introduced, which touted a new and impressive slow-motion chronograph feature. Its name is derived from the chronograph hand that circles the dial once per hour, instead of once per minute, in effect making the timepiece more effective in measuring submersion time.

A decade later, the Breitling Superocean 2005 Execution 2 was released, debuting a seconds register and easier to read baton hour markers and broader hands. Two bezel options were offered for this series – a yachting bezel option, and the traditional 60-minute diving scale.

By the 1990s, “rider tabs” were introduced into the Breitling Superocean line. These small protrusions, also seen in Colt and Avenger collections, are placed at the 3, 6, 9, and 12 o'clock positions, giving the wearer better grip while rotating the bezel.

In 2007, to celebrate the anniversary of the original Breitling Superocean, they introduced the Superocean Heritage line – a collection of watches that are built in the mold of vintage dive watches but equipped with modern movements. The line’s minimalist bezel and dials, the absence of crown guards, and the “Milanese” style bracelet offer a throwback to the dive watches of yesteryears; while the 38 to 46 mm case size, and the variety of different colors and materials keep it in tune with modern tastes.

The collection continues to be fine-tuned for even greater water-resistance, chronometric precision, and modern aesthetics.

ABOUT THE BREITLING SUPEROCEAN COLLECTION

The Breitling Superocean collection is composed of two families of watches: the Superocean and Superocean Heritage. Despite sharing similar monikers, they are easily distinguishable and serve different purposes.

The Superocean features a more contemporary and robust aesthetic and has a wider range of depth ratings (from 300 to 2000m), while the Superocean Heritage comes with a vintage dive watch aesthetic and splash-proof water resistance (100 to 200m).

Here are key models under each sub-collection.

This family of watches features sporty, colorful, and boldly designed diver’s watches built for exceptional performance in and out of the waters. Earlier models feature “rider tabs” on the 3, 6, 9 and 12 o’clock positions, while current designs feature ratcheted bezels, both serving the purpose of easier handling. Large Arabic numbers and oversized hands allow divers to easily read time underwater.

The current collection has been renamed “Superocean Automatic” with 36, 42, 44, 46 and 48mm sizes. Dials now feature a sleeker, more modern design with a combination of large Arabic numbers and trapezoidal markers. Materials range from stainless steel, DLC-coated stainless steel, and titanium.

Each model in the collection also has different levels of water-resistance, depending on the case diameter:

This family of watches feature retro-inspired aesthetics, a direct homage to the original Breitling Superocean of 1957. To achieve a sporty-elegant look, these watches feature steel or ceramic bezels with minimal markers, a crown without crown guards, large sword hands and a braided “Milanese” bracelet. In fact, it was one of the first modern watches to revive the mesh steel bracelet, which continues to be an option within the Superocean line today.

The 1950s Breitling Flying ‘B’ logo and ‘Superocean’ script were also both revived in the Superocean Heritage – both adding to the affectionate nods to the brand’s original diver.

The Superocean Heritage is available in 42, 44 and 46mm sizes, with time only and chronograph options. Water resistance for the entire range is at 200m.

Under the Superocean Heritage line is the Superocean ’57 capsule collection. This line of watches is inspired by the laid-back surfing lifestyle of the 1960s, hence the minimalist aesthetic, concave bezel, and retro typography. The old school look is combined with scratch-resistant ceramic bezels and the Breitling Caliber 10, a COSC-certified chronometer.

Breitling documents their watches’ production using reference numbers. Each model is assigned a 12-digit reference number, where each letter or number corresponds to a code describing the watch’s type, design, movement, and certification.

Breitling’s reference numbers provide a lot of information, but only models produced from 2000s onwards include the production period of the watch.

COMMON QUESTIONS ABOUT THE BREITLING SUPEROCEAN

WHAT IS A BREITLING SUPEROCEAN?

Both families feature classic dive watch features such as waterproof cases, rotatable bezels, and luminous markers on the dial.

Both the Superocean and Superocean Heritage lines offer a wide assortment of case materials, bezel and dial colors, as well as bracelets – including mesh steel, leather, and rubber.

HOW WATERPROOF IS THE BREITLING SUPEROCEAN?

There is a Breitling Superocean watch for any challenge, whether you plan to dive with it, surf with it or swim with it.

Here are the water resistance levels of the current Superocean range: