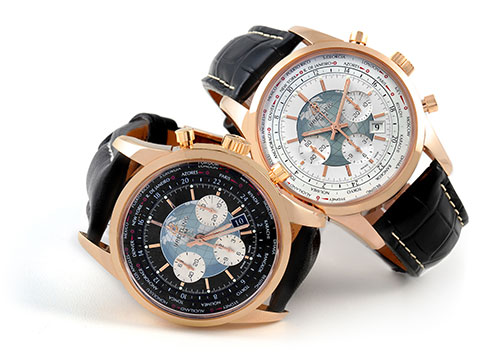 The Breitling Transocean is a collection of watches made for the sophisticated traveler. Introduced in the 1950s, during the golden age of transcontinental flight, the dressy line complemented the precise chronometers that Breitling had built a reputation for. With a polished and elegant aesthetic, the Transocean offers an alternative to the rugged look of Breitling's military and aviation watches. Today's Breitling Transocean collection also offers COSC-certified automatic mechanical movements, which power chronograph, calendar, and world time complications - appealing to a new wave of watch collectors who also jet set around the globe. Explore our collection of Breitling Transocean watches at SwissWatchExpo.com. 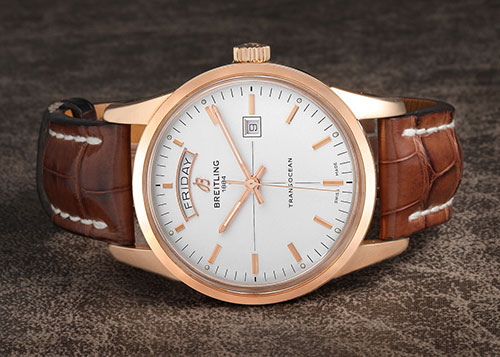 Introduced in the 1950s, the golden age of transcontinental travel, the Breitling Transocean was made for the jet set. Decades before, Breitling had firmly cemented their status as the choice watchmaker of aviation experts with the Navitimer and the Chronomat. With the Breitling Transocean, they paid homage to the rise of global exploration and the new generation of travelers.

The Breitling Transocean’s polished and elegant design is a step away from the sporty and rugged aesthetic of their renowned chronographs and military watches. With their ultra-sleek cases, clean and harmonious dials, and added GMT and calendar complications, the collection has proved to be the ideal companion for business and leisure travel.

A BRIEF HISTORY OF THE BREITLING TRANSOCEAN

At the dawn of the 1950s, Breitling had already established themselves as the choice watchmaker of pilots and aviation experts. In the prior decade, Breitling was focused on creating watches for pilots and clocks for airplanes, which laid the groundwork for the Chronomat in 1940. In 1952, they introduced the now notable Navitimer, which was a result of Breitling’s partnership with the Association of Aircraft Owners and Pilots (AOPA).

The following years ushered in significant developments in air and ocean exploration. Breitling, hoping to grow its market, plunged into the world of dive watches with the Superocean in 1957. The following year, they sought to engage the new generation of leisure and business travelers with the Transocean.

The Transocean’s design was a step away from the rugged tool watches that Breilting has been known for. With round cases and elegant dials, they could easily serve as dress watches, the type that business executives would wear. The collection was discontinued soon after, only to be revived some forty years later.

In 2010, Breitling brought back the Transocean from their archives. The contemporary collection kept its vintage aesthetic, but featured modern upgrades. The re-edition of the Transocean came in a case that’s 43mm in diameter and 14.35mm in thickness, in keeping with the demand for larger case sizes.

In 2013, Breitling added the more modest 38mm variation to the collection, which echoed the spirit of the original Transocean.

A wide array of complications were also made available: the classic chronograph, date, calendar, and moonphase functions. Another important upgrade in the new Transocean was the addition of the Breitling B01 automatic mechanical movement. The in-house caliber boasts a 72-hour power reserve and is displayed through a sapphire caseback.

In 2019, the Transocean was discontinued, following Breitling’s efforts to streamline their offerings. The collection is still sought after in the secondary market for its sophisticated charm.

ABOUT THE BREITLING TRANSOCEAN

When Breitling brought back the Transocean in the 2010s, it continued to honor the original’s distinctly timeless design, with modern upgrades to the movement and materials, and a noticeably enhanced luxury positioning. Here are the key models in the collection.

The Breitling Transocean re-edition introduced in 2010 came in a larger 43mm case and a thicker 14.35mm profile. Its perfectly round case, combined with the stepped junctions on the lugs, the shallow inclined bezel, and the domed curvature of the sapphire crystal echo the charm of the original 1958 model.

Three years after, this model was also offered in a 38mm size, a homage to the original Transocean. Breitling equipped the Transocean Day & Date with an automatic winding caliber 45 movement. The COSC-certified Swiss chronometer offers a 42-hour power reserve, while the Day & Date will require correction only five times per year.

The Transocean is also offered with a chronograph version in 43mm and 38mm sizes. It features three registers in the traditional 3-6-9 o'clock configuration for easy reading, and also indicates the date through an aperture between the 4 and 5 o'clock position. This watch is powered by the in-house Breitling 01 self-winding movement, which offers approximately 70 hours of power reserve.

The Transocean Chronograph 1461 combines the chronograph function with a semi-perpetual calendar. It features a complete calendar (day, date, month and moon phases), and only needs adjustment every 1,461 days (during a leap year with a 29th of February). It is powered by the Caliber B19, which is based on the ETA 2892-A2 movement, and offers a 42-hour power reserve.

In 2014, Breitling introduced one of their most complicated pieces within the Transocean – the Transocean Chronograph Unitime. In addition to its chronograph, it features a world time function, which displays the time in 24 time zones at once.

The chronograph subdials are located at 3, 6, and 9, while two discs sit around its outer edge: one for the world cities and another for the 24-hour scale. This watch is powered by the B05 movement, which is based on the emblematic Breitling B01.

In 2015, Breitling celebrated the 100th year of one of their milestone creations: the first independent chronograph push-piece. Prior to its invention, the push-piece for starting, stopping, and resetting the chronograph was always integrated into the crown.

The Breitling Transocean Chronograph celebrates this work of genius by placing the push-piece at 2 o'clock. This modern rendition also has a 43-mm case, a silver dial, retro-style Arabic numerals filled with luminescence, a date window at 6 o'clock. There's also a small seconds counter at 9 and a 30-minute counter at 3. Breitling equipped this model with the manual in-house caliber B14, which offers a 70-hour power reserve. Fittingly, the Transocean Chronograph 1915 was limited to just 1,915 pieces.

Breitling records its sale and manufacture using reference numbers. Each model is assigned a 12-digit code, where each digit corresponds to a code describing the watch’s type, design, movement, and certification.

Breitling’s reference numbers provide a lot of information but note that pre-2000s models don’t include the production period of the watch.

COMMON QUESTIONS ABOUT THE BREITLING TRANSOCEAN

WHAT IS A BREITLING TRANSOCEAN?

The Breitling Transocean is a collection of watches made for the sophisticated traveler. Introduced in the 1950s, during the golden age of transcontinental flight, the dressy line was meant to complement the robust and sporty chronometers that Breitling was known for.

It was revived in 2010 with a more modern aesthetic, in-house movements, and a series of complications: date, chronograph, moonphase, perpetual calendar and world time models.

IS THE BREITLING TRANSOCEAN WATERPROOF?

Breitling Transocean models are water-resistant to 10 bar (100 m, 328 ft), making them “splash proof”. This means they are safe for swimming at the surface and other water sports, but not for diving.

HAS THE BREITLING TRANSOCEAN BEEN DISCONTINUED?

The Breitling Transocean collection has been discontinued since 2019, but models are still available in the secondary market.

This move came upon Georges Kern’s entry as CEO of the brand. With an effort to streamline Breitling’s offerings, one can still find the Transocean’s elegant charm in the Premier collection, a line of watches dedicated purely to style, with the aim of bringing of old-world sophistication back to the brand.