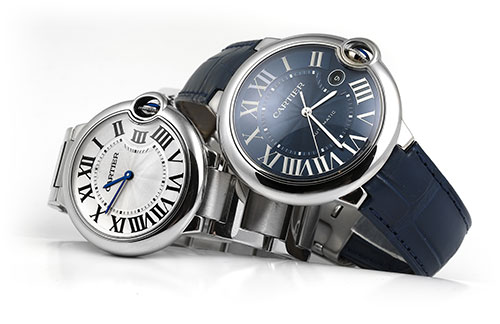 The Cartier Ballon Bleu is a modern timepiece with the elegance of fine jewelry. Named after the French word for ball, it is characterized by its round case, and blue sapphire cabochon ensconced within the crown guard. Introduced in 2007, it is available in time, time and date, and chronograph versions, with case sizes ranging from small to XL. Explore our collection of Cartier Ballon Bleu watches for men at SwissWatchExpo.com. 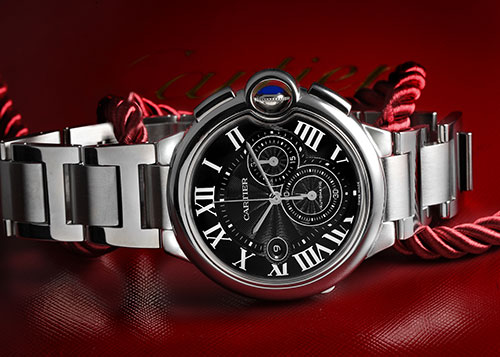 The Cartier Ballon Bleu is a graceful take on the classic round watch. Introduced in 2007, the Ballon Bleu was loved for its unique domed profile, sleek monobloc construction, and clever integration of the sapphire cabochon within its crown.

With the Ballon Bleu’s combination of spherical forms and the addition of various complications, Cartier successfully combined the technical craft of watchmaking with fine jewelry sensibility.

The Ballon Bleu is also one of those rare creations that suits both genders. Its design gives off a relaxed and dressy look on men; and a chic, sophisticated look on women. Its modern elegance has earned the nod of many influencers and tastemakers, such as Usher, Johnny Depp, and Kate Middleton.

A BRIEF HISTORY OF THE CARTIER BALLON BLEU COLLECTION

The Cartier Ballon Bleu is a relatively new addition to the French Maison’s catalog, having been introduced only in 2007. Yet, it has already become one of the most-loved unisex watches.

The Ballon Bleu’s introduction was the company’s biggest ever launch of a round watch – and it wasn’t the usual kind of round. It features a monobloc construction where the top and bottom form an elegant arc, and the signature Cartier blue cabochon is nestled within the crown. Its French name translates to “blue balloon”, where the balloon-like shape is intended to float on the wrist, and the “blue” refers to the signature blue sword-shaped hands and sapphire cabochon of Cartier watches. With its flat black, it sits comfortably on the wrist, even in larger sizes.

The collection began with simple versions that make up the majority of the catalog. Powered by an ETA-based automatic movement, the Ballon Bleu comes in time-only and time-and-date editions in steel, gold, and two-tone; with cases measuring 28, 33, 36 and 42mm in diameter.

Throughout its short history, the Ballon Bleu was also made in special and complicated editions: the Chronograph, the Flying Tourbillon, the Extra Flat measuring 7.05mm deep (from the usual 13mm), and the Moon Phase.

The latest edition of the Cartier Ballon Bleu came out in 2021, with the totally new 40mm case and the in-house 1847 MC automatic movement inside. This joins the previous four sizes and provides a sweet spot between the traditional 36mm and large 42mm case size.

The new 40mm edition also features Cartier’s ingenious QuickSwitch system, where the wearer can interchange its strap and bracelet without the need for tools.

Even with a very short history, the Cartier Ballon Bleu has enjoyed resounding success, and is now considered a true icon.

ABOUT THE CARTIER BALLON BLEU COLLECTION

The Cartier Ballon Bleu has a stable design that can be worn in a variety of settings and has no danger of ever going out of style. Despite this, Cartier was able to play around with the Ballon Bleu’s design, adding different complications and sprucing up models with diamond embellishments. Here are the styles available within the Cartier Ballon Bleu collection, to include now discontinued models:

The chronograph edition of the Ballon Bleu features a 30-minute counter at 3, small seconds at 6, and a date display at 9 o'clock. This model measures 44mm, one of the largest Ballon Bleu models, and comes in steel, rose gold and two-tone steel and rose gold. It is powered by the in-house caliber 1904-CH2.

The flying tourbillion edition of the Ballon Bleu was first introduced in a 47mm size in 2013, and updated the year after. The current edition comes in a 39mm case, with a blue flinque enamel dial without the usual Roman numerals. The flying tourbillon is placed above 6 o'clock with a prominent “C” decoration. It is powered by the caliber 9452 MC.

The Ballon Bleu has also been offered with a moon phase indicator at 9 o’clock. This model measured 37mm and was offered in steel, rose gold, and white gold, with an automatic movement. The white gold version was made more special with 117 diamonds on its bezel.

The Ballon Bleu Extra-Flat embraces two extremes with its extra-wide 46mm case and ultra-flat 7mm profile. These proportions are made possible by the manual caliber 430 MC. This model is offered in rose gold and white gold.

All Cartier models are given a reference number, to accurately document their manufacture and sale. Cartier’s reference numbers are composed of 8 characters and are usually randomly assigned. They begin with a letter, followed by an alpha-numeric combination.

Here are the reference numbers for Cartier Ballon Bleu watches:

One of Cartier’s most popular collections, the Ballon Bleu is an intricate and distinctive interpretation of the round watch. Here are some of the most frequently asked questions about the Cartier Ballon Bleu:

WHAT IS A CARTIER BALLON BLEU?

The Cartier Ballon Bleu is a casual-to-dress watch with a convex round case and a sapphire cabochon integrated within the crown. It also comes with the choice of a polished link bracelet or a leather strap. Cartier Ballon Bleu watches come in both men’s and women’s editions and have a wide range of metals and sizes available.

IS THE CARTIER BALLON BLEU WATERPROOF?

Cartier Ballon Bleu watches are water resistant to 3 bar (or approximately 30 meters / 100 feet). This amount of water resistance is enough to protect it from rain or hand washing but is not intended to be used while showering or even during light water activities like swimming or snorkeling.

IS THE CARTIER BALLON BLEU DISCONTINUED?

The Cartier Ballon Bleu has been in continuous production since 2007. Some models (such as the Extra Flat or Chronograph) have been discontinued, but the basic, time-only models and Tourbillon are still being produced by Cartier.