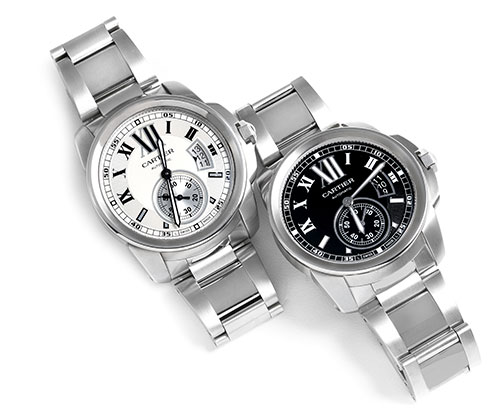 The Calibre de Cartier is a sporty and robust reinterpretation of the classic round watch. Aside from its bold take on signature Cartier elements, the special feature among Calibre de Cartier watches lies within their interior: without exception, they are equipped with Cartier movements produced completely in-house.

Introduced in 2010, the Calibre de Cartier marked two notable firsts for the French maison: it is the first watch equipped with an automatic mechanical movement crafted entirely in-house at the Cartier workshop in Switzerland; and it is also the first caliber in the company’s history to be designed specifically for the men’s sports watch market.

This paved the way for Cartier to not just establish its identity as a manufacturer of its own movements, but also as a key player in the sports watch genre.

While it was discontinued in 2018, the Calibre de Cartier, as well as its Chronograph, Diver, and Tourbillon sub-collections, continue to be sought after in the pre-owned market. Explore our selection of Calibre de Cartier watches at SwissWatchExpo.com.

A BRIEF HISTORY OF THE CALIBRE DE CARTIER COLLECTION

The beginnings of the Calibre de Cartier can be traced back to the creation of the first Cartier in-house movements in 2008.

Historically, Cartier was not known for creating movements in-house. That changed with the introduction of the Ballon Bleu Flying Tourbillon, the maison’s first watch to earn the Geneva Seal, and the first to feature the 9452 MC caliber -- their declaration of readiness to create their own movements.

Given that the Ballon Bleu Flying Tourbillon was a Geneva Seal watch, it also carried a prohibitive price tag, pushing it well into the haute horology category. To be able to cater to a wider audience, Cartier introduced the Calibre de Cartier line, a better-priced collection featuring the 1904-CH MC movement.

The 1904-CH MC was the first in-house automatic movement made by Cartier. MC stands for "Manufacture Cartier", while 1904 is an ode to Louis Cartier’s pioneering spirit. In 1904, the third generation Cartier developed a modern wristwatch for the pilot Alberto Santos-Dumont – a friend who needed a timepiece that he could read while flying a plane.

Introduced in 2010, the inaugural Calibre de Cartier featured 42mm steel and rose gold cases with an assortment of straps and bracelets that range from exotic leathers to solid rose gold. Because of the larger case size, watches from this line are seen to be of a sportier look than usual, but is filled with Cartier’s signature elements like sword-shaped hands, and a winding crown featuring a blue synthetic spinel. As a departure from typical Cartier design, the Calibre de Cartier line features both stylized Roman numerals and batons as hour markers, an expanded date window, and a seconds sub dial. Both the front and back of the watch feature a sapphire crystal, displaying the intricate movements that power it.

Two years after the line’s first introduction to the market, chronograph models were added to the lineup. The Diver collection was introduced a year after, in 2013. While the Diver models look similar to the earlier models, they were created to be ISO 6425 certified, with additional features necessary for diving. The Diver models featured a rotating ceramic bezel that could be used for measuring immersion times and a 300-meter water-resistance rating.

2015 saw the introduction of the smaller Calibre de Cartier 38, featuring a modified dial layout: a singular date window, blue hands, and all the hour markers being Roman numerals. These were also made available in a myriad of case metals and straps and bracelets, with the addition of a diamond bezel in some variations.

The Calibre de Cartier line was discontinued in 2018, but is still a sought-after piece in the sphere of resale. It remains to be a singular moment in the brand’s history, setting quite the precedent in how the maison designs and manufactures their watches.

ABOUT THE CALIBRE DE CARTIER COLLECTION

The Calibre de Cartier’s sporting masculinity and efficient mechanical movement placed the Maison alongside the likes of Rolex, Omega, and IWC when it comes to making sports watches. The success of the inaugural watch spawned an entire collection, which was composed of the following designs:

Designed as a sports watch, the Calibre de Cartier debuted with a 42 mm case and alligator leather straps. The dials are clear stamped in black, covered with a sapphire crystal. The transparent case back is also made of sapphire crystal showing the movement of the watch.

The Cartier timepiece that shocked the Haute Horlogerie observers in 2010, the Calibre de Cartier Tourbillon features the Calibre 9452 MC that bears the Geneva Seal mark.

With a beat of 21,600 VpH, Cartier Tourbillon has a 50-hour power reserve. The flying tourbillon gives an illusion of floating bridges enhancing its visual look.

The Calibre de Cartier Chronograph model was released in 2012. Its defining feature are two chronograph pushers inserting the winding crown. Two sub dials make for an easier reading of the minute and hour counters.

Leveling up its presence as a sports watch, the Calibre de Cartier Diver was introduced in 2013. With a 6425 ISO standard, this designer dive watch comes with a 60-minute rotating bezel, and is 300-meter water resistant. When below the surface, the dive-time indicators glow because of the Super-Luminova luminescent which glows up to 18 hours.

The final design from the collection was the Calibre de Cartier 38, a wrist-friendly alternative to the 42mm case of the Calibre. Cartier modified the dial layout to fit the smaller case, featuring a singular date window, blue hands and all-Roman numeral hour markers. These were made available in various case metals, straps, and bracelets, with the addition of a diamond bezel in some versions.

Cartier uses reference numbers to document its manufacture and sale properly. Cartier reference numbers are randomly assigned for every model and their specific material, and are composed of 8 characters, commonly starting with a letter, followed by a combination of numbers and letters.

Below are the reference numbers for the Cartier Calibre collection:

The Calibre de Cartier is a sporty interpretation of the round watch. Masculine, sporty, and efficient, the collection affirms Cartier’s expertise in developing its own movements, and its place in the sports watch genre. Here are the most commonly asked questions about Calibre de Cartier:

WHAT IS A CALIBRE DE CARTIER?

IS THE CALIBRE DE CARTIER WATERPROOF?

IS THE CALIBRE DE CARTIER DISCONTINUED?

Cartier discontinued the Calibre collection around 2018, after an 8-year production run. They remain widely sought-after in the secondary market.