The Cartier Panthere was first introduced in 1983, during a decade of decadence. Revolving around the concept of the jewelry watch, the Panthere is a sleeker take on the square Santos, with a smaller case, and a linked bracelet that hugs the wrist. Cartier Panthere watches are powered by quartz movements, and are available in yellow gold, rose gold, stainless steel, and two-tone models. Explore our collection of Cartier Panthere watches for men at SwissWatchExpo.com. 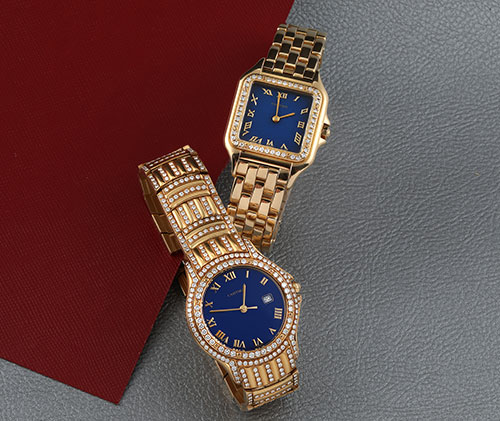 The Cartier Panthere is a watch that wears like fine jewelry. French for “panther”, the watch stems from the feline image that has been a part of the brand since 1914. Depicting the core attributes of determination, class, and fierce femininity, every piece from the Cartier Panthere line gives elegance upon elegance.

The range of Cartier Panthere watches dropped in 1983 – a time of extravagance, indulgence, and self-expression. With cases made of precious metals and often embellished with diamonds; paired with an ultra-flexible bracelet that mirrors the graceful movements of a panther, it quickly became the it watch of the era. From Cartier faithful to celebrities like Pierce Brosnan and Tina Turner, every tastemaker of the time was spotted with the Cartier Panthere.

Cartier revived the Panthere in 2017 as an exclusive line of watches for women. With a myriad of sizes, from mini to medium, and a wide range of styles from affordable to high jewelry, the Cartier Panthere lives on as one of the most iconic watches from the French Maison. Explore our collection of Cartier Panthere watches at SwissWatchExpo.com.

A BRIEF HISTORY OF THE CARTIER PANTHERE COLLECTION

The Cartier Panthere watch collection was introduced in the 1980s, but its origins can be traced back to the early 1900s. Jeanne Toussaint, a Parisian style icon known as “La Panthere”, began collaborating with Cartier founder Louis Cartier. She eventually became one of the brand’s most famous creative directors.

In 1914, Louis Cartier commissioned a watercolor painting entitled “Dame à la Panthere”, made by French artist George Barbier. The art piece featured a woman draped in jewels and a black panther with a diamond-encrusted collar at her feet. While it was intended to be part of an invitation to a Parisian jewellery exhibition, it became an integral part of the brand’s advertising and the inspiration for many of their designs.

Toussaint’s creative spirit drove her to design the now iconic Panthère – a bracelet watch bearing black onyx and rose-cut diamond embellishments to mimic the fur of a panther. Since then, the panther motif has become a distinctive trademark among Cartier’s watches, jewelry, and accessories. For the next few decades, the panther would be the brand’s muse, a symbol of beauty, power, and femininity.

In the 1980s, a period of indulgence and extravagance, Cartier introduced the Panthere de Cartier watch collection. Centered on the image of the panther, it featured a long, flowy bracelet and a square case reminiscent of the Santos. It quickly joined the ranks of the Maison’s other iconic pieces, such as the Cartier Santos and Cartier Pasha.

Its positioning as a wearable and functional piece of jewelry also won over the influential set. Aside from Cartier enthusiasts, many celebrities donned the Cartier Panther at the time, like Pierce Brosnan and Tina Turner. It also made several appearances in film in TV, most notably the drama Remington Steele and the 1987 classic Wall Street.

The Cartier Panthere’s appeal lies in its timelessness. It incorporates signature Cartier features – such as the square case with exposed screws, Roman numeral dial, and blue spinel cabochon – and marries it with its iconic flowy bracelet. Made up of five interlocking links, the bracelet is both elegant and comfortable to wear.

The Panthere was discontinued in 2004 and for the following decade remained highly sought-after in the secondary watch market. In 2017, Cartier revived the collection with a more modern silhouette, and an expanded range. The current collection comes in three different sizes – mini, small, and medium – and comes in nine different finishes, from steel to solid gold.

ABOUT THE CARTIER PANTHERE COLLECTION

The Cartier Panthere watch collection was revived in 2017 as an exclusive line of watches for women. An icon of the 1980s, the Panthere gained cult following by positioning itself as a wearable piece of jewelry as much as it is a timepiece.

Here are the key models under the current Cartier Panthere watch collection.

There are also models with brilliant cut diamonds on the bezel and lugs. Each watch is water-resistant to 3 bar (or approximately 30 meters).

Panthere de Cartier Manchette - The Manchette, French for “cuff”, accentuates the flowing bracelet of the Panthere through double-panels that are either sprinkled with jewels or enamel links. The partly open-worked chain reveals a glimpse of the skin and makes for a statement piece. Available in 18k yellow gold, rose gold, and white gold. Diamond and lacquered models come in rose gold and yellow gold.

Each Cartier model is assigned a reference number, in order to properly document their manufacture and sale. Cartier reference numbers are randomly assigned and are made up of 8 characters. They start with a letter, followed by an alpha-numeric combination.

Below are the reference numbers for the Cartier Panthere collection:

COMMON QUESTIONS ABOUT THE CARTIER PANTHERE

WHAT IS A CARTIER PANTHERE WATCH?

The Cartier Panthere is a collection of watches that wear like jewelry. Design-wise, the Panthere is a daintier take on the square Santos, with a smaller case, and a flowy, linked bracelet that hugs the wrist.

Reintroduced in 2017, today’s Cartier Panthere watches come in steel and precious metals, and are also available in diamond-embellished styles. New additions to the range include double- and triple-loop bracelets and a cuff design with an off-centered dial.

The current collection is powered by quartz movements.

IS THE CARTIER PANTHERE WATERPROOF?

Cartier Panthere watches are water resistant to 3 bar (or approximately 30 meters). With this level of water resistance, one can wear it in light rain or while hand washing, but is not intended to be submerged in water during activities like swimming or snorkeling.

IS THE CARTIER PANTHERE DISCONTINUED?

The Cartier Panthere watch collection was first introduced in 1983 and discontinued in 2004. It was revived in 2017 as an exclusive line of watches for women, and continues to be part of the Cartier catalog until today.