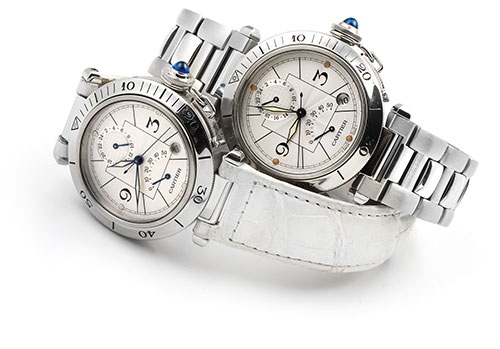 The Cartier Pasha was designed by Louis Cartier himself, and is considered the first waterproof timepiece from the brand. Characterized by its round case and Arabic numerals at the 3,6,9 and 12 o’clock positions, the most distinguishing feature of the Pasha is the protective crown cap attached to the case by a small chain. The Cartier Pasha line includes time-only, time and date, chronograph, GMT, Pasha C, and Seatimer models. Explore our collection of Cartier Pasha watches for men at SwissWatchExpo.com. 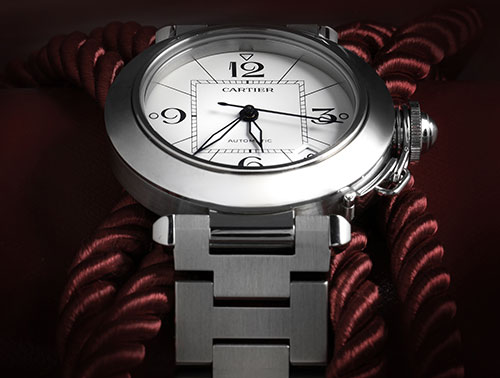 The Cartier Pasha is a luxury sports watch with a refined appeal. Introduced in 1985, it became one of the cult watches of the decade, showing the breadth of Cartier watch design.

The Pasha was Cartier’s answer to the call for luxury sports watches, and it set itself apart by bringing together unexpected elements: a large round case, Vendome-lugs, a square rail-track, and a protective crown cap attached to the case with a chain. Some models even included a protective grid over the crystal.

It was said to be inspired by a 1940s Cartier design, made especially for Thami El Glaoui, the Pasha of Marrakesh – a lover of fine watches and lifelong patron of Cartier.

With its combined elements, the Pasha is about as far from the classic rectangular Tank or square Santos, yet it is instantly recognizable as a Cartier. The wide range of sizes, metals, and functions means there is a Cartier Pasha to suit any taste and need.

Explore our selection of Cartier Pasha watches at SwissWatchExpo.com.

A BRIEF HISTORY OF THE CARTIER PASHA COLLECTION

The Cartier Pasha was introduced in 1985, as the French Maison’s version of the luxury sports watch. The large (for its time) 38mm round case and prominent crown protector became its defining characteristics.

Although Cartier officially launched the Pasha in 1985, there is a persistent tale in watch circles about its origin. As the story goes, the Pasha of Marrakesh, Thami El Glaoui, commissioned Louis Cartier to create a watch for him in the 1930s. It had to be waterproof to keep pace with the Pasha, who likes to swim, hence the protective crown. There is no actual record of this watch except for a 1943 model that resembles the Pasha; but Cartier does acknowledge the model’s association with the late royal.

Fast forward to 1985, consumers were quickly shifting to sportier steel watches that better suited their active lifestyles. At the time, Cartier was better known for its dress watches, so they commissioned someone with expertise on the matter: renowned designer Gerald Genta, most famous for creating the Audemars Piguet Royal Oak and Patek Philippe Nautilus.

Genta’s design featured a larger than usual 38mm gold round case, distinctive Vendôme lugs, and a cabochon-set screw-down crown that was secured to the case with a small chain.

Another key to the Pasha’s appeal is the dial: it featured a square rail-track at center, and a refined set of Arabic numerals, showcasing Cartier’s mastery of playing with shapes.

The Cartier Pasha collection expanded throughout the following decades. A steel model was introduced in 1990, followed by the entry-level Pasha C with a smaller 35mm case in 1995. Complications followed, with GMT, chronograph, and tourbillon models added to the family. In 2006, the Pasha Seatimer was introduced, mixing a chic and sporty look with its rotating bezel. The Cartier Pasha series carried on until 2012.

In 2020, Cartier revived the collection with the new Pasha de Cartier. The fundamentals of the model remained – with the elegant round case, distinctive lugs and crown protector still in place. At the center of the new collection are time-only pieces, now measuring 41mm and 35mm, aimed at men and women respectively. Just like the original, these models provide 100 meters of water resistance, but they now come with Manufacture Cartier automatic movements and the brand’s QuickSwitch or SmartLink system, which allows the wearer to interchange the strap or adjust the bracelet without the need for tools.

The Pasha de Cartier revamp also chose a young and edgy crew of ambassadors – such as actor Rami Malek and singer Troye Sivan – helping the cult classic appeal to a new generation of watch lovers.

With the Pasha’s classic design, Cartier didn’t have to deviate from the original. The addition of refined finishing, much-improved movements, and a bevy of options, means the new Pasha de Cartier is set to become a modern classic.

ABOUT THE CARTIER PASHA COLLECTION

Within the Cartier Pasha line are different sub-collections to suit different needs and tastes. While previous versions of the Pasha have stopped production, they remain available in the pre-owned market.

Cartier Pasha C – The first Pasha in steel. These measure 35mm and are considered entry-level versions of the Pasha. Made for everyday wear, one will notice the absence of the sapphire cabochon on its crown, which is meant to make it less fragile.

Cartier Pasha Seatimer – The diver’s-style Pasha. It comes with a unidirectional 60-minute bezel typical of diver’s watches, and Super-Luminova on the hour markers for maximum legibility.

Cartier Pasha GMT – The Pasha GMT features a round bezel calibrated in 24 hours, for reading time in another time zone. In most models, a meridian appears on the dial further emphasizing the travel theme.

In 2020, Cartier introduced the reimagined Pasha de Cartier. Like other Cartier watches re-introduced in the recent years, most of these models use in-house calibers. The new Pasha is also sleeker, thanks to brushed surfaces. The crown is still protected by the chained-cap, and the 100-meter water resistance remained.

Within the new Pasha de Cartier line are the following models:

35mm / 41mm – the revamped Pasha was first introduced with 35mm (medium) and 41mm (large) cases aimed at women and men. Both available in stainless steel and 18k yellow or rose gold, one must note that the 41mm features a date but the 35mm has no date display. The 35mm version also comes with an 18k white gold model with pave diamonds all over the watch. Used in both 41mm and 35mm models is the manufacture movement Calibre 1847 MC.

42mm – the largest size available. These come with chronograph and time-only options in steel and 18k rose gold.

Cartier Pasha Skeleton – a steel watch with a skeletonized movement that is prominently shown off due to an open worked dial.

Cartier models are each given a reference number, in order to document their manufacture and sale properly. These numbers are randomly assigned and are composed of 8 characters. They start with a letter, followed by a combination of numbers and letters.

Below are the reference numbers for the Cartier Pasha collection:

COMMON QUESTIONS ABOUT THE CARTIER PASHA

The Cartier Pasha is the French Maison’s interpretation of the luxury sports watch. Here are some of the most frequently asked questions about the Cartier Pasha:

WHAT IS A CARTIER PASHA?

The Cartier Pasha is a sport-to-dress watch that comes with a round case, Vendome-lugs, a square rail-track on the dial, and a protective crown cap attached to the case with a chain.

Designed by Gerald Genta, it was introduced in 1985 as a luxury sports watch, but has since evolved to include complications. (GMT, chronograph, tourbillon) and dressier, diamond embellished designs.

IS THE CARTIER PASHA WATERPROOF?

Cartier Pasha watches are water resistant for up to 100 meters or 330 feet. This level of water resistance makes it a splash-proof watch - ideal only for daily wear and recreational activities with minimal water exposure.

IS THE CARTIER PASHA DISCONTINUED?

The original line of Cartier Pasha watches was discontinued in 2012. Eight years after, in 2020, the brand re-introduced the Pasha de Cartier line, which retains the key characteristics of the Pasha but updates it with a brushed finish and in-house movements.