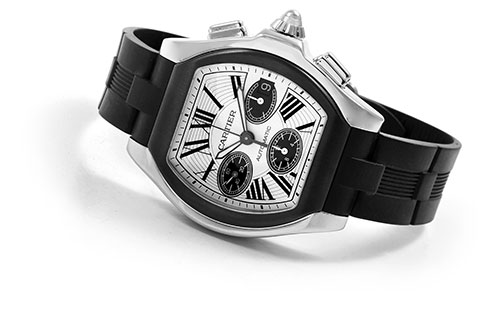 Introduced in 2001, the Cartier Roadster is one of the newer additions to the Maison, but draws inspiration from vintage automobiles of the 1950s. It incorporates design elements from the sport and race watches of the era, such as the Porsche-like dial and the highly-contoured shape. The Cartier Roadster evokes a sense of nostalgia, and is perfect for motoring enthusiasts. Explore our collection of Cartier Roadster watches for men at SwissWatchExpo.com. 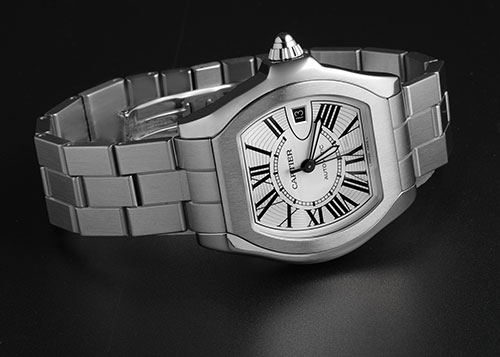 The Cartier Roadster is a contemporary casual-to-dress watch that pays tribute to the golden age of the sports car. Introduced in 2001, it is one of the French Maison’s more recent releases, with a design inspired by luxury roadsters from the 1950s and 60s.

While most racing watches take inspiration from the high-octane world of cars and motorsports, the Cartier Roadster is heavily influenced by elegant vintage automobiles. Its unmistakable silhouette and finer details are based on old-fashioned automotive parts, thus bringing a sense of nostalgia when you wear it. The most striking feature of the Cartier Roadster models are the radial dials, which call to mind the 1950’s Porsche 356 speedometer.

The Cartier Roadster is a prime example of the brand’s mastery in combining elegance and sport in one timepiece. While it was discontinued in 2012, the Cartier Roadster, as well as its Chronograph, GMT, XL, and limited editions continue to be sought after in the pre-owned market. Explore our selection of Cartier Roadster watches at SwissWatchExpo.com.

A BRIEF HISTORY OF THE CARTIER ROADSTER COLLECTION

Cartier was one of the first watchmakers to develop non-round watch cases. Louis Cartier, its third-generation designer and chairman, made “shaped watches” fashionable during an era when round watches were the norm. He is credited for designing the square Santos, the rectangular Tank, the oval Baignoire, and the first tonneau-shaped watches of Cartier released in 1906.

Almost a century later, Cartier introduced a modern approach to the barrel-shaped case with the Cartier Roadster, introduced in 2001. It was Cartier’s answer to the growing demand for robust sports watches, while also showcasing their expertise in uniquely-shaped timepieces. While most racing watches evoked the imagery of speed and the race track, the Roadster was a more elegant take on the world of cars.

The watch bears several elements of automotive imagery. The curved lines of its polished tonneau case call to mind the designs of great car brands from the 1950s. The recessed screws of on its edges look somewhat like headlights seen on classic cars such as the Alpha Romeo Spider and Aston Martin Racing; the oversized magnification lens recalls curved glass windshields, while the crown mimics the look of a car radiator, or fins seen on classic Cadillacs. Even more overtly, the dials are influenced by car speedometers, particularly that of the Porsche 356, with their concentric details, large Arabic numerals, thin seconds hands, and small hash marks.

The Roadster was also one of the first Cartier models to feature the brand’s quick-release strap system, which allows the wearer to change the bracelet to a compatible leather or rubber strap without the use of tools.

During its short decade-long production period, the classic Roadster model was joined by chronograph and GMT models, as well as a few special edition designs. It enjoyed solid popularity during this period but was ultimately shelved so the brand can focus on other men’s watches.

With its balance of sport and elegance, as well as the wide variety of sizes and materials available, the Cartier Roadster remains in demand among watch loving folk.

ABOUT THE CARTIER ROADSTER COLLECTION

The Cartier Roadster collection ran from 2001 to 2012. Most models in the range featured a 42-hour power reserve and a water resistance level of up to 100 meters, making it suitable for daily wear.

Apart from its classic design and versatility, the Roadster is also well-loved for the great variety of models available. Sizes ranged from smaller women’s sizes to a 50mm XL edition. The Roadster is also available in different materials including stainless steel, yellow gold, rose gold, and two-tone steel and gold.

Cartier released several different versions of the Roadster, as follows:

Cartier Roadster Automatic - the classic version of the Roadster measures 38 x 43mm, with a silver sunray dial, Roman numerals along a concentric track, luminescent sword-shaped steel hands, and an oversized magnifying lens over the date.

Cartier Roadster Quartz - the Roadster was also produced with a quartz model, in a smaller 31mm size made for ladies.

Cartier Roadster GMT - the Roadster GMT debuted in 2002, featuring 24-hour gradations on the outer rim of the dial for telling a time in a second time zone.

Cartier Roadster XL - a much larger version of the Roadster, the Roadster XL was introduced in 2011. It measures 49mm x 50mm, and pairs its stainless steel case with a black rubber strap.

Cartier Roadster S - Towards the end of the 2000s, Cartier introduced a streamlined version of the Roadster called the Roadster S. This kept the tonneau shape of the case but replaced the curved bezel with a wider and flatter version, and also did away with the magnification lens on the date and the visible screws on the lugs.

Rare Cartier Roadster Dials - there were also notable special dials within the Roadster range. One was the Vegas Roulette dial which mimics the look of a spinning roulette wheel with its red and green Arabic numerals and black concentric dial. There was also a Roadster with a polished burr walnut wood dial, which was reminiscent of vintage car interiors. In 2008, to commemorate Cartier’s 100 years in America, they released an electric blue sunburst dial version of the Roadster.

Every Cartier model has a corresponding reference number, which helps the company document its manufacture and sale properly. These numbers are randomly assigned and are composed of 8 characters. They begin with a letter, followed by a combination of numbers and letters.

Below are the reference numbers for the Cartier Roadster collection:

COMMON QUESTIONS ABOUT THE CARTIER ROADSTER

The Cartier Roadster is a modern-day tribute to the golden age of the sports car. Models from this collection feature automotive inspiration and combination of elegance and sport. Here are the most commonly asked questions about the Cartier Roadster.

WHAT IS A CARTIER ROADSTER?

The Cartier Roadster is a collection of tonneau or barrel-shaped watches whose design details are inspired by vintage roadsters from the 1950s and 60s.

Despite the vintage inspiration, the Cartier Roadster was a fairly recent addition to the brand’s catalog, having been launched in 2001. It came from the idea of blending Cartier’s expertise in non-round case designs with the market’s demand for robust sport watches.

IS THE CARTIER ROADSTER WATERPROOF?

Cartier Roadster watches are water resistant for up to 100 meters or 330 feet. This level of water resistance is ideal for daily wear and recreational activities with shallow water exposure.

IS THE CARTIER ROADSTER DISCONTINUED?

Despite the Cartier Roadster’s success and popularity, and being one of the newest additions to the Cartier portfolio, it was discontinued in 2012. They remain widely sought-after in the secondary market.