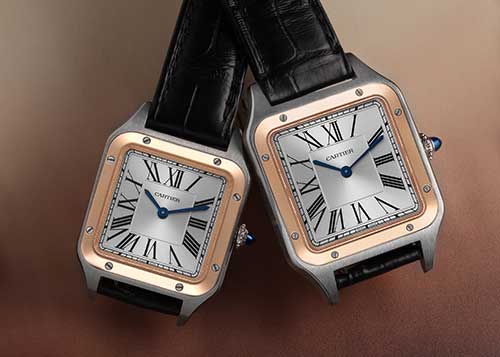 The Cartier Santos-Dumont has very famous beginnings. In 1904, at the request of pioneer aviator Alberto Santos-Dumont, Louis Cartier designed a watch that could be worn and read while he navigated the skies.

Not only did Cartier deliver the first men’s watch that could be strapped on the wrist, he also challenged the status quo by introducing a square design when the market was dominated by round watches. By marrying form and function, the Cartier Santos-Dumont revolutionized the world of watchmaking.

The Santos-Dumont’s iconic square-shaped case, exposed rivets, and French square dial remain signature traits of the entire Santos collection today, more than 100 years since it was introduced to the market. The collection has evolved with the times and can be enjoyed today in contemporary versions, in various sizes and finishes.

Find yours from our wide selection of Cartier Santos-Dumont watches at SwissWatchExpo.com.

A BRIEF HISTORY OF THE CARTIER SANTOS-DUMONT COLLECTION

The Cartier Santos-Dumont has a very famous backstory, but it is one worth retelling. It all began with a collaboration between two pioneering individuals – the Brazilian-born, Paris-based aviator Alberto Santos-Dumont, and the fourth-generation designer and head of Cartier, Louis Cartier.

In 1901, Santos-Dumont became the first man to fly around the Eiffel tower in an aircraft that he built himself. He approached Cartier and explained that it was difficult to hold the controls and at the same time monitor his time at flight. He requested the latter to come up with a timepiece to solve his problem.

Louis Cartier took inspiration from Santos-Dumont’s feat at the Eiffel and designed a case which mimicked a stylized view of the tower from above the skies. The result was a square watch, with sloping edges. Its bezel had exposed screws that echoed the feet of the tower. That one piece became the first men’s wristwatch and was handed over to Santos-Dumont in 1904.

By 1911, the French jewelry- and watchmaker was ready to introduce the watch to the public. It was named the Cartier Santos-Dumont, and was first crafted in platinum and gold, and powered by a movement supplied by Jaeger. It became a success among men, many of whom had only worn pocket watches, and loved the convenience of this new piece. Despite its success, its production was halted around the Second World War, as most countries required pilots to use round wristwatches.

In 1998, Cartier introduced the Collection Privée Cartier Paris (CPCP), a line that revived many of the brand’s historical designs and outfitted them with high-end manufacture calibers. Among the releases were two new editions of the Santos-Dumont, one in platinum and another in yellow gold. Both were equipped with Frédéric Piguet movements.

For the 100th anniversary of the Santos collection in 2004, Cartier came out with a new Santos-Dumont watch named the “1913”. The case and movement were similar to the 1998 CPCP edition, only that it had Breguet-style hands. Production was limited to 100 pieces in yellow gold, and only one in platinum, making it highly sought-after among collectors.

The Santos-Dumont collection will not be revived again until fifteen years later, following a slew of updates for the brand’s most iconic pieces. Cartier began the revivals with the Privé collection in 2015, the Santos de Cartier in 2018, followed by the Santos-Dumont in 2019.

Even classic pieces must evolve with the times, and Cartier understood this. The new Santos-Dumont watches still had the hallmark square case, exposed screws and French dial of the original, but it was given larger dimensions and more ergonomic curves to meet the needs of today’s collectors.

Cartier continued to update the Santos-Dumont line in the next two years, with the introduction of an Extra-Large case and a never-before-seen lacquered dial.

With an increasing number of options available, there is a Cartier Santos-Dumont for every taste and preference.

ABOUT THE CARTIER SANTOS-DUMONT COLLECTION

2019 Redesign
Cartier launched the current collection of the Santos-Dumont watch at SIHH in 2019. The collection comes in two sizes: the small case measuring 27.5mm wide, and the large case which is 31.4mm wide.

This range is offered in stainless steel, 18k rose gold, and two-tone steel and rose gold. All models come with leather straps.

While the design is very contemporary, it did retain a few key elements from the original Santos-Dumont. First is the intricate beaded crown with a pointed sapphire cabochon, and another is the dial with thin, long Roman numerals.

Inside runs a high-autonomy quartz movement with 6 years of battery life.

2020 Manual Winding Edition
The Cartier Santos-Dumont redesign was lauded by the watch community, but some enthusiasts did make their wish for a mechanical movement known. In 2020, Cartier did introduce a manual winding Cartier Santos-Dumont. Not only did it have a new movement, it also came with a larger case that’s 46.6mm wide. Inside runs the Caliber 430 MC, a modified and branded version of the Piaget 430P.

2022 Lacquered Edition
For 2022, Cartier looked through their archives and made a revival of a vintage Santos with a decorated dial. The result was the Cartier Santos-Dumont Lacquered Case. The base design is still similar to the current Santos-Dumont in steel and rose gold, but these models have recesses on the dials that are filled with lacquer, forming a concentric cube pattern.

This edition is available in a standard production steel model, and limited editions of rose gold and platinum which are only available with 250 and 150 pieces respectively. The steel model is paired with black lacquer, the rose gold model with beige lacquer, and the platinum model with burgundy lacquer. All models have leather straps and are also powered by the Caliber 430 MC.

All Cartier models are given a reference number that is used to properly document their manufacture and sale. The reference numbers of Cartier watches are composed of 8 randomly assigned characters with alpha-numeric combinations.

Below are the reference numbers for the Cartier Santos-Dumont collection:

COMMON QUESTIONS ABOUT THE CARTIER SANTOS-DUMONT

WHAT IS A CARTIER SANTOS-DUMONT?

The Cartier Santos-Dumont is the original Santos watch created by Louis Cartier for Brazilian pilot Alberto-Santos Dumont in 1904. The latter requested for a timepiece that he could use to monitor flight time without having to abandon the plane gears, and the rest is history.

Cartier began offering the Santos-Dumont watch to the public in 1911, and those models were exclusively made in platinum or yellow gold. They were also exclusively available with leather straps and with a gold folding buckle. The said buckle or deployant was also an invention of Cartier and for many years it remained the lone folding buckle in the market.

In 2019, the Cartier Santos-Dumont was revived with a more modern size and ergonomic proportions. Equipped with a quartz movement, it is currently considered the Santos collection’s entry-level model. In 2020, Cartier followed up with mechanical versions of the Santos-Dumont.

DOES THE CARTIER SANTOS-DUMONT HOLD ITS VALUE?

Cartier is a heritage brand that focuses on timeless design, while continuing to invest in technical and aesthetic upgrades of its watches. Because of this many Cartier watches do maintain their value.

Watches from the Santos collection fare well in value over time because of their classic looks and robust build. They are also quite versatile and can be worn in both casual and dressy occasions, making them worth their cost-per-wear.

IS THE CARTIER SANTOS-DUMONT WATERPROOF?

Today’s Cartier Santos-Dumont watches are water resistant to 30 meters or 100 feet, which make them “splash proof”. This means the watch can withstand exposure to droplets, but should not be submerged in water, particularly during swimming and water sports.

IS THE CARTIER SANTOS-DUMONT DISCONTINUED?

Cartier continues to produce the Santos-Dumont watch. Following the redesign of the collection in 2019, Cartier released new models in 2020 and 2022.