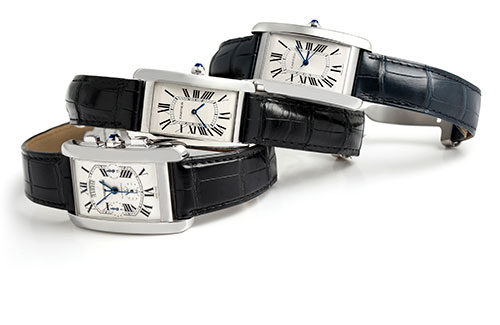 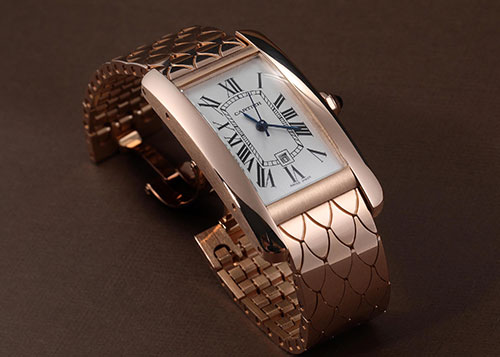 The Cartier Tank Américaine is the modern interpretation of the curved watch. Inspired by the Tank Cintrée from the 1920s, the Tank Américaine took its iconic elongated case and pronounced curve, and playfully updated the geometry of its lines.

Born in 1989, right at the dawn of a new historical era, its larger size and subtle elegance adapted the classic Tank to newly developing tastes. Alternating between round edges and angles, its curved front hugs the wrist while the flat case back anchors it. The masterful design of the Américaine has remained a success ever since.

Today, the Tank Américaine is offered in stainless steel and precious metals, and is available in a range of sizes from small to large, catering to the discerning collector who seeks a powerfully elegant timepiece. Explore our selection of Cartier Tank Américaine watches at SwissWatchExpo.com.

A BRIEF HISTORY OF THE CARTIER TANK AMERICAINE COLLECTION

The iconic Cartier Tank was introduced in 1917 and has since been produced without interruption. The proportioned rectangular case and rounded angles, inspired by French tanks used during the first World War, has remained a classic, and an inspiration not just for Cartier but the watch industry as a whole.

A milestone came in the Tank’s history in 1921, when the Tank Cintrée (French for “curved”) was introduced. This marked the first instance of a curved case for the Tank collection. Add to that an elongated case, which was rare at a time when round watches were the norm, so the Cintrée was considered a revolutionary design.

To complement its curved case, the Cintrée also displayed a new dial, where the rail-track was curved on the ends, making the signature Roman numerals really stand out.

Almost 70 years later in 1989, Cartier would revive the elongated and curved design with the Cartier Tank Américaine. The late 1980s ushered in the era of larger watches, and Cartier sought to create a version of the Tank that would appeal to those who sought pieces that are more substantial on the wrist.

The Tank Américaine’s design was obviously inspired by the Cintrée, with its curved case and rail-track, but it came with a few updates. First is the case back that sits flat on the wrist instead of the dramatically curved caseback of the Cintrée. The Américaine is also thicker to accommodate the automatic movement inside.

The inaugural models of the Tank Américaine were produced exclusively in 18k yellow and rose gold, followed by a white gold version introduced in 1995. Limited editions were also produced in its short lifespan. There’s a special platinum version made for the Italian market, with dark green Roman numerals and a matching green crocodile strap; then there was a white gold version with a salmon-colored dial with Arabic numerals at 9 and 7, to commemorate the handover of Hong Kong to China in 1997. There are also rare versions with chronograph and even flying tourbillon complications.

In 2017, the Tank Américaine was finally produced in stainless steel, in time for the Cartier Tank family’s 100th anniversary. This expands the already vast range of the Tank Américaine, which is also available in various sizes, from mini to large, and with options of diamond embellishments and straps.

The Cartier Tank Américaine has been spotted on the wrists of celebrities and tastemakers, including Tom Holland, Rami Malek, and Jennifer Garner, and continues to be the choice of watch lovers who seek an ergonomic yet elegant timepiece.

ABOUT THE CARTIER TANK AMERICAINE COLLECTION

The Cartier Tank Américaine was introduced in 18k yellow and rose gold, and continues to be produced in these metals today. It was in 1995 that white gold versions were introduced, in the same year that Cartier added the option of a metal bracelet to the collection. Limited edition platinum models have also been released beginning in the late 1990s.

In 2017, as a key part of Cartier’s 100th year celebrations for the Tank, the Tank Américaine was finally introduced in steel.

Within the Cartier Tank Americaine collection are different sizes and functions as follows:

Cartier models are assigned reference numbers, in order to properly document their manufacture and sale. Cartier reference numbers are made up of 8 random characters. They start with a letter, followed by an alpha-numeric combination.

Below are the reference numbers for the Cartier Tank Américaine collection:

The Cartier Tank Américaine marries ergonomic features with elegant proportions. Here are the most frequently asked questions about the collection:

WHAT IS A CARTIER TANK AMERICAINE?

The Cartier Tank Américaine watch was introduced in 1989 as a modern incarnation of the of the vintage Tank Cintrée. The Tank Cintrée (which means “curved” in French) was produced in the 1920s and is remembered for its dramatically elongated and curved case. Similarly, the Tank Américaine also includes a stretched out case, however its caseback is flat rather than curved.

The Cartier Tank Américaine is available in precious metals and stainless steel, in various sizes from mini to large, and comes with both quartz and automatic movements.

IS THE CARTIER TANK AMERICAINE WATERPROOF?

WHAT MOVEMENT IS IN THE CARTIER TANK AMERICAINE?

IS THE CARTIER TANK AMERICAINE DISCONTINUED?

The time-only and time-and-date Cartier Tank Américaine models continue to be in production, however, models with more advanced complications (such as chronograph and tourbillon models), have been discontinued. Fans who seek these models can find them in the pre-owned market.