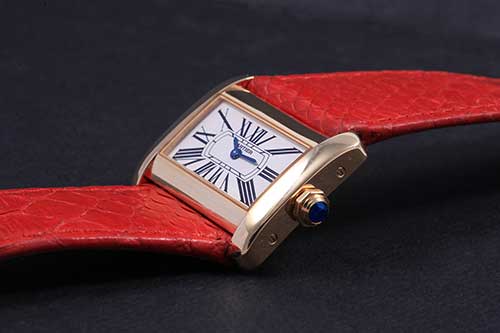 The Tank Divan takes its name from the French word for “couch”, owing to its wide shape and cushioned contours. Models were sized from 31mm to 38mm, and with its horizontal shape, even the largest models fit very well even on smaller wrists. The smaller ladies models were powered by quartz movements, while the larger editions had automatic movements under their hood.

Available in stainless steel, and 18k yellow, rose, and white gold, the Tank Divan’s disruptive design is softened by its high-polish finish. With a design that is entirely unique from the rest of the Cartier catalog, the Tank Divan is perfect for those who seek that coveted vintage look. Explore our collection of Cartier Tank Divan watches from SwissWatchExpo.com.

A BRIEF HISTORY OF THE CARTIER TANK DIVAN COLLECTION

After the successful launch of the Cartier Tank Francaise in 1996, the French maison quietly followed it up with another iteration of the Tank – the Tank Divan. While previous editions of the Tank were inspired by vintage models, the Tank Divan was a completely new design, and one that was very radical.

It turned the classic rectangular shape of the Tank and turned it sideways, and added curves on the usually angular case.

The Tank Divan was made available in two sizes – a 31 x 25 mm ladies edition with a quartz movement, and a large 38 x 30 mm edition with an automatic caliber. With its unique horizontal case, even the larger case worked well on women’s wrists.

Models were launched in stainless steel, and in 18k yellow, rose, and white gold, with the gold editions having limited models with diamonds on the brancards or case sides.

Models come in Cartier’s classic white, guilloche, and silvered dials, with the signature Roman numerals in an “exploding” arrangement on the dial. The hidden “CARTIER” signature sits on the XI marker, while the classic blued steel hands and blue sapphire cabochon crown are still present. All models are paired with leather straps, and for a short time, there were python leather straps made available.

Because the Cartier Tank Divan was a different beast, it had a short-lived life and was discontinued five years later in 2007. It may not have been as popular as the Tank Francaise which preceded it, but it does have a niche audience – those who see a Cartier watch with a show-stopping, retro appeal.

The Cartier Tank Divan is still available at auctions and in the pre-owned watch market.

ABOUT THE CARTIER TANK DIVAN COLLECTION

The Cartier Tank Divan was introduced in two sizes – one made for the ladies, and another which was suited for both men’s and women’s wrists.

All Cartier Tank Divan models were paired with leather straps. Some models were also adorned with diamonds, either in a pave diamond style that covers the entire case, or with larger brilliant cut diamonds on the brancards or sides of the case. There were also very rare models with mother of pearl dials, or python leather straps.

All Cartier models are given a reference number, in order to properly document their manufacture and sale. These are randomly assigned and are composed of 8 characters. They begin with a letter, followed by an alpha-numeric combination.

Below are the reference numbers for the Cartier Tank Divan collection:

WHAT IS A CARTIER TANK DIVAN?

The Cartier Tank Divan was introduced in 2002 as an entirely new watch design from the French jewelry- and watchmaker. While it adheres to the basic rectangular design of the Tank, it turned the design sideways and also added a curved back that sits ergonomically on the wrist.

It comes in both men’s and women’s sizes and was made available in stainless steel and 18k yellow, rose, and white gold.

IS THE CARTIER TANK DIVAN WATERPROOF?

IS THE CARTIER TANK DIVAN DISCONTINUED?

The Cartier Tank Divan was only produced from 2002 to 2007. It was quietly discontinued, but remains available in the secondary watch market. It is particularly sought after by those who seek a retro looking timepiece. Explore our collection of Cartier Tank Divan watches.