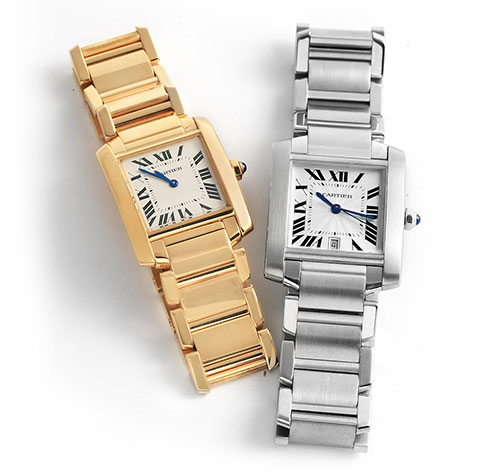 The Cartier Tank Francaise was introduced in 1995 as a modern and sportier take on the classic Tank watch. It is distinguished from other Tank watches by its pointed shoulders, and chain-link bracelet reminiscent of the caterpillar treads of a tank. The Tank Francaise is the first Tank watch to come in full stainless steel construction, and is also available today in yellow gold, rose gold, and two-tone models. Explore our collection of Cartier Tank Francaise watches for men at SwissWatchExpo.com. 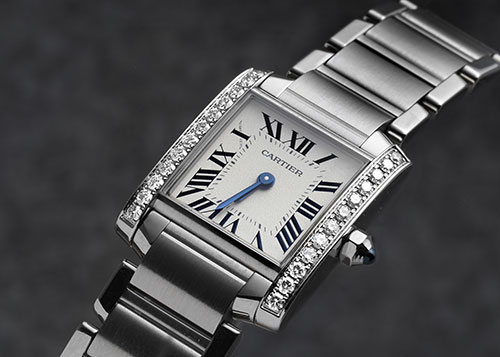 The Cartier Tank Francaise represents the iconic Tank’s sportier side. Introduced in 1996, it brought modern sensibility to the timeless collection with a compact, angled case, and a metal link bracelet.

Just like other watches in the Tank family, the Tank Francaise resembles the caterpillar treads of military tanks used in World War I, whose ridged lines and rectangular shape deviate from the round watches of the time. The all-metal construction and integrated bracelet of the Tank Francaise was a contemporary approach from the Maison, to appeal to new generations of watch lovers.

Today, the Tank Francaise is offered in steel, two-tone, yellow gold, and rose gold variations, and is available in a range of sizes, from small to large. Explore our selection of Cartier Tank Francaise watches at SwissWatchExpo.com.

A BRIEF HISTORY OF THE CARTIER TANK FRANCAISE COLLECTION

Designed by third-generation watchmaker Louis Cartier, the original Cartier Tank was introduced in 1917, amidst the first World War. As the story goes, the rectangular shape of the Tank, and its linear bezel, were inspired by the new Renault military tanks that fought the battlefield at the time. The Cartier Tank has been a mainstay in the brand’s catalog since then, with Cartier producing countless iterations of the iconic timepiece.

When the Richemont family took over the Cartier brand in the 1980s, new versions of the Tank were introduced, as tributes to their flagship boutiques in New York, Paris, and London. The slimmer Tank Americaine came first in 1989; followed by the Tank Francaise in 1996; and finally, the Tank Anglaise in 2012. Each of these watches answered the prevailing needs and trends of the era.

In 1996, the Tank Francaise was introduced as a modern and sportier take on the classic Tank. It was squarer in shape than rectangular, and had sharper edges and straighter lines. It also featured an integrated metal bracelet – a first in the Tank family – which gave it a slightly more casual look while retaining the elegance of the Tank. The chain-link bracelet was very well-received, particularly by the younger crowd, and while it is the most ubiquitous style of the Tank Francaise, they did produce leather versions, too.

Aside from that, the Tank Francaise kept Cartier’s signature design codes: it had the familiar black Roman numerals and blue sword-shaped hands, along with the “secret Cartier signature” hidden in the VII or X numeral. The blue cabochon-cut stone on the winding crown also remained. While the classic Tank remained free of embellishments, the Tank Francaise experimented with different dial materials and textures such as mother of pearl and flinque, as well as diamond indexes in place of numerals.

The Cartier Tank Francaise has found success as the choice of celebrities, royals, and tastemakers, including Princess Diana, Meghan Markle, Jennifer Garner, and Rachel Weisz.

ABOUT THE CARTIER TANK FRANCAISE COLLECTION

The Cartier Tank Francaise brought modern sensibility to the Tank series when it was introduced in 1996. Its main features include a case shaped between a square and a rectangle, sharper shoulders and edges, and a slightly domed case that sits comfortably on the wrist. Its integrated chain-link bracelet, which resembles the treads of war-time tanks, also set it apart from the traditional leather straps seen on other Tank models.

Within the Cartier Tank Francaise collection are different sizes and functions as follows:

Small – measures 25 mm x 20 mm, powered by a quartz movement. These come in steel, yellow and rose gold, and two-tone finishes. There are also models with diamonds on the bezels and hour markers.

Medium – measures 30 mm x 25 mm, powered by a quartz movement. These come in steel, yellow and rose gold, and two-tone finishes. There are also options with diamond bezels and hour markers.

Large – discontinued model; these measure 28 x 32 mm, and come in steel, yellow gold, and two-tone models. They continue to be available in the pre-owned market.

Chronoflex – a chronograph edition Tank Francaise, now discontinued. This watch measures 37 x 28 mm and comes with a quartz movement. Its dial features hour and minute counters at 4 and 8 o'clock, and a date display at 12.

Below are the reference numbers for the Cartier Tank Francaise collection:

One of Cartier’s greatest hits, the Tank Francaise is an iteration of the iconic Tank that marries timeless elegance and modern approachability. Here are some of the most frequently asked questions about the Cartier Tank Francaise:

WHAT IS A CARTIER TANK FRANCAISE?

The Cartier Tank Francaise is a collection within the Cartier Tank family, introduced in 1996. These are watches that feature a square-rectangle case with strong lines, and a metal chain-link bracelet. They are considered sportier and more modern versions of the Tank watch.

IS THE CARTIER TANK FRANCAISE WATERPROOF?

Cartier Tank Francaise watches are water resistant to 3 bar (or approximately 30 meters). This level of water resistance is enough to protect it from rain or hand washing but is not intended to be used for water activities like swimming or snorkeling.

IS THE CARTIER TANK FRANCAISE DISCONTINUED?

While certain models of the Cartier Tank Francaise have been discontinued (such as Large and Chronoflex models), the collection is still in production. Current production Tank Francaise watches come in small and medium sizes.