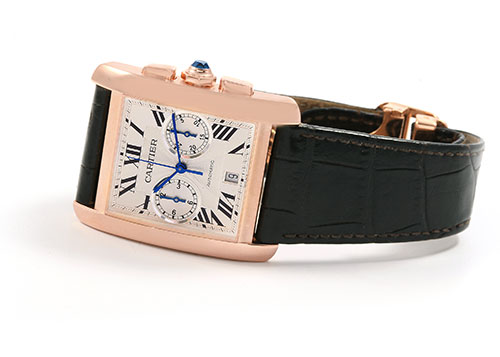 The Cartier Tank MC was launched in 2013 as a more robust and masculine take on the classic Tank watch. To meet the growing preference for larger watches, the Tank MC took on a wider case with strong square dimensions. It was also the first standard production Tank model to be equipped with an in-house caliber – the 1904 MC automatic movement. With a workhorse caliber and undeniable wrist presence, the Cartier Tank MC exudes power and elegance. Explore our collection of Cartier Tank MC watches at SwissWatchExpo.com. 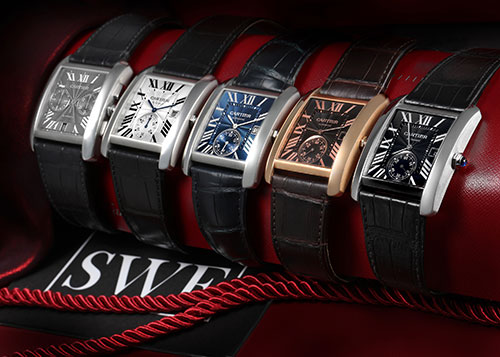 The Cartier Tank collection, introduced in 1917, has grown over the last century with various renditions of the classic rectangular watch. Inspired by WWII vehicles, Tank watches are loved for their pure and precise design. The Cartier Tank MC, with its larger case and strong square dimensions, is a resolutely masculine take on the iconic model.

Along with its contemporary looks, the Tank MC also boasts of being the first Tank model to be equipped with an in-house caliber. The 1904 MC automatic movement, previously made available only on the Calibre de Cartier collection, drives the time together with the subsidiary seconds dial and the date.

With its modern size, design, and movement, the Cartier Tank MC appeals to any wrist that’s looking for something on the bolder side. Explore our collection of Cartier Tank MC watches at SwissWatchExpo.com.

A BRIEF HISTORY OF THE CARTIER TANK MC COLLECTION

The Cartier Tank was the watch to own in the 20th century. Inspired by World War I armoire, the Tank rejected the sensual Art Nouveau style so popular at the time, in favor of elegant, pure lines. Its no-frills modern design became a hit among fashion savants, royalty, serious collectors, and jazz age elite.

Over the decades, the original Tank has been joined by many beautiful variations – such as the Tank Louis Cartier, the Tank Américaine, and the Tank Française – all bearing its slightly decadent Parisian elegance.

2008 was an important year for Cartier. They finally became manufacturers through their own in-house movements, beginning with the Calibre 9452 MC, which was introduced in the Tank Americaine; and eventually, their first in-house chronograph movement, the 1904-CH MC.

In 2013, the Maison’s iconic design took on a resolutely masculine edge. Cartier answered the call for larger watches with the Tank MC – with its strong dimensions and modern movement, it presented a bolder take on the classic.

The classic Cartier character remained with its brancards, flinqué dial, Roman numerals, and blue spinel cabochon, but with added heft on the wrist. Cartier makes sure that each variation of the Tank offers something unique, and for the Tank MC, it’s the thicker side flanks, more-square-than-usual case and curved top that appears to wrap around the wrist.

The finish is also impressive, with the bridges and base plate bearing a straight-grained surface that catches light.

Cartier also decided to have a bit of fun with different dial colors and a choice between stainless steel and 18k rose gold. The classic silver dial is paired with the signature blued steel hands, while darker dials either have rose gold or stainless steel hands to match the body. The sub-seconds at 6 o’clock is a neat complication that gives the dial an added masculine touch.

Aside from its modern dimensions, what really sets the Tank MC apart from the rest of the Tank family is its in-house movement. The “MC” in its name stands for “Manufacture Cartier”, which refers to its in-house made caliber – the 1904 MC automatic movement, previously made available only on the Calibre de Cartier collection.

The movement operates at 4 Hz offering a 48-hour power reserve; and drives the time together with the subsidiary seconds dial and the date. Completing the Tank MC’s allure is the sapphire crystal display caseback, which shows off the caliber – a trait only seen on Cartier watches with in-house movements.

The Cartier Tank MC remains a staple in the brand’s catalog, and is the choice of those who seek a powerfully elegant watch.

ABOUT THE CARTIER TANK MC COLLECTION

Aside from appealing to watch lovers who sought larger dress watches, Cartier also used the Tank MC line in trying to appeal to seasoned collectors. Aside from the basic time-and-date model, the Tank MC was also offered with a chronograph and skeleton dial version.

Unmistakable Tank characteristics, including Roman numerals, sword hands, and the blue spinel cabochon remain with all the models, and they are exclusively available with leather straps.

Here are the key models under the Cartier Tank MC collection.

Tank MC – The classic Cartier Tank MC includes a date aperture at 3 o’clock and small seconds counter at 6 o’clock. With a case measuring 34.5mm, it is available in stainless steel and 18k rose gold, with dials in silver, blue, and black guilloche.

Tank MC Chronograph – The Tank MC Chronograph comes in the same construction as the classic Tank MC, only the dial comes with 30-minute and 12-hour totalizers at the 3 and 9 o'clock respectively. The date window is at the 6 o'clock position, in place of the small seconds subdial.

Both the Tank MC and Tank MC Chronograph are powered by the 1904-CH MC movement which offers approximately 48 hours of power reserve.

Tank MC Skeleton - The Tank MC Skeleton became part of their high-end watchmaking line, bearing the open-worked numerals that have become the signature of Cartier’s skeleton models, such as the Santos and the Rotonde. This stripped-back execution reveals the 9611 MC caliber, a manual-wind movement with double barrels and a practical 72-hour power reserve. The Tank MC Skeleton is cased in ultra-rare palladium, a heavy white metal that comes with a muted sheen, is more resistant to scratches and is said to be 30 times rarer than gold.

Below are the reference numbers for the Cartier Tank MC collection:

The Cartier Tank MC introduced the first in-house caliber to the Tank collection, paired with a resolutely masculine design. Here are some of the most frequently asked questions about the Cartier Tank MC:

WHAT IS A CARTIER TANK MC?

The Cartier Tank MC may be considered the "power" watch of the Tank family. A modern, bold and very masculine style, it features a wider flanking case measuring 34.5mm and bolder versions of Cartier signatures on its dial - including Roman numerals, sword hands, and a centralized seconds track.

IS THE CARTIER TANK MC WATERPROOF?

Cartier Tank MC watches are water resistant to 3 bar (or approximately 30 meters). This level of water resistance is enough to protect it from rain or hand washing but is not intended to be used for water activities like swimming or snorkeling.

IS THE CARTIER TANK MC DISCONTINUED?

While certain models of the Cartier Tank MC have ceased production (such as the Chronograph and Skeleton models), the standard Tank MC is still in production. Current production Tank Francaise watches come in stainless steel and 18k rose gold versions.