The Cartier Tank Solo was introduced in 2004 as an entry-level version of the classic Cartier Tank Louis. Sharing the same proportions as the Tank Louis, the Tank Solo is distinguished by its flatter brancards and thicker cases. It is available in a full stainless steel version, and in steel, yellow gold, and rose gold versions with leather straps. Explore our collection of Cartier Tank Solo watches for men at SwissWatchExpo.com. 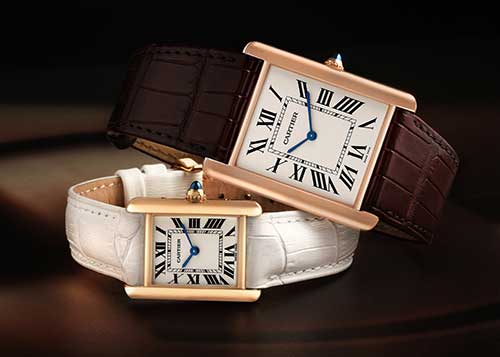 The Cartier Tank Solo is the modernized and pocket-friendly take on the classic Tank watch. Introduced in 2004, it was one of the French maison’s attempts at bringing their classic models up to date.

The Tank Solo stripped away all ornate details and focused on the most recognizable aspect of the Tank – its rectangular case. Whereas the original Tank design had rounded brancards, the Tank Solo had flat ones resulting in a more casual look. While previous Tank watches such as the Tank Francaise and Tank Americaine had reimagined case shapes, the Tank Solo simply put Cartier’s signature details front and center: the white dial with Roman numerals, blue sword hands, and an octagonal blue cabochon to match.

The use of stainless steel and synthetic cabochon, combined with a quartz movement, also made the Tank Solo the most affordable Tank watch of its time. The line has since expanded to include 18k yellow gold and 18k rose gold editions, as well as an XL-sized automatic model.

A BRIEF HISTORY OF THE CARTIER TANK SOLO COLLECTION

The Cartier Tank is an undisputed classic among watches. In 1917, when Europe was in the throes of the First World War, Louis Cartier saw Renault tanks on the battlefield, and was inspired by their shape. The result was a simple rectangular design that remains a staple until today.

Over the next decades, Cartier would take the rectangular design of the Tank and come up with new variations, from the curved case of the Cintrée and Americaine, to the angular case of the Francaise.

In 2004, Cartier introduced the Tank Solo. Among iterations of the Cartier Tank, the Tank Solo was the closest to the original Tank watch, the Tank Louis from 1917. It had the classic rectangular case with circular edges, only this time, the brancards or sides of the case are not rounded but had a flat surface. It became a more casual alternative to the Tank Louis, which was also in production, and remains so today.

Aside from its minimalist looks, the Cartier Tank Solo also emphasized efficiency and practicality with its quartz movement. Its first generation was produced in two sizes – a ladies 24.4mm x 31mm size and a unisex 27mm x 34.8mm size.

By 2012, Cartier added an XL case size in response to prevailing watch trends. It also introduced for the first time an automatic movement to the Tank Solo range. The Cartier Tank Solo XL Automatic was initially powered by the Cartier 049 calibre, which is a modified ETA 2892 movement. In 2015, when Cartier introduced the in-house 1847 MC movement in the Clé collection, it soon updated the Tank Solo XL with the new movement.

While the Cartier Tank Solo has met its sunset, it remains sought-after among budding watch collectors, as well as those who seek an entry-level Cartier watch.

ABOUT THE CARTIER TANK SOLO COLLECTION

The Cartier Tank Solo can be categorized into two families of watches: quartz and automatic. The first generation of Tank Solo watches were made with quartz movements, until the XL Automatic was introduced in 2012. Below are the characteristics of each sub-collection and the models available:

Cartier Tank Solo Quartz
The quartz editions of the Cartier Tank Solo are available in two sizes: a ladies’ 24.4mm x 31mm case, and a midsize unisex watch with a 27mm x 34.8mm case. These models are available in stainless steel (with an option of a steel link bracelet or leather strap) and 18k yellow gold with a leather strap. The quartz editions are also time only watches.

There are several additions to the design of the automatic that cannot be found on the quartz model. These include: the date aperture at 6 o’clock which takes the place of the Roman numeral, an “Automatic” indication at the center of the dial, and of course, the self-winding movement.

Earlier models of the Tank Solo XL Automatic were powered by the Cartier 049 calibre, which is a modified ETA 2892. By 2015, this was updated with the in-house 1847 MC movement with a 42-hour power reserve.

The Cartier Tank XL Automatic is available in stainless steel (with an option of a steel link bracelet or leather strap), and in 18k rose gold with steel case back and a leather strap.

All Cartier models are assigned a reference number to properly document their manufacture and sale. These are randomly composed of 8 characters, which usually begin with a letter, followed by an alpha-numeric combination.

Below are the reference numbers for the Cartier Tank Solo collection:

WHAT IS A CARTIER TANK SOLO?

Introduced in 2004, it presents flat brancards as opposed to the circular ones found on the original Tank. It was considered an entry-level Cartier watch, and the most affordable Cartier Tank available.

IS THE CARTIER TANK SOLO WATERPROOF?

Cartier Tank Solo models, like most of Cartier’s dress watches, are water resistant to 30 meters or 100 feet. With this level of water resistance, they can be worn daily and still have enough protection from splashes (such as handwashing) but they should not have long-term exposure to water, or be worn during water sports or swimming.

IS THE CARTIER TANK SOLO DISCONTINUED?