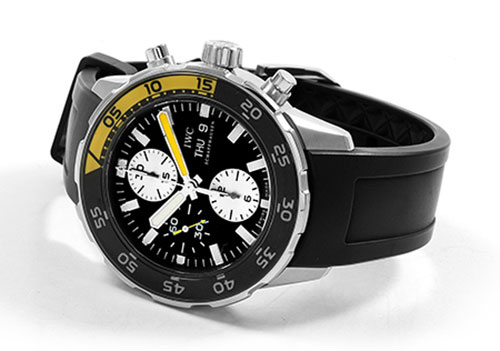 The IWC Aquatimer is the brand’s dedicated diving watch. Introduced in the 1960s, just as professional diving and underwater exploration were gaining popularity, it offered a slightly different feature from the diver’s watches of the time: a rotatable bezel located under the glass, to prevent it from being moved accidentally during a dive. Today, the Aquatimer is a cornerstone of the IWC catalog, with a wide range of water-destined watches – from three-handed models to chronographs and perpetual calendars. Explore our collection of IWC Aquatimer watches at SwissWatchExpo.com. 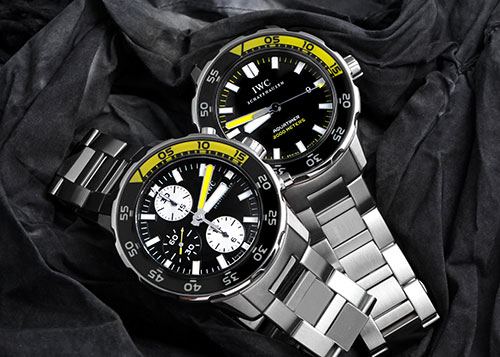 While IWC is best known for its pilot’s watches, the brand also makes a capable and stylish line of dive watches – the IWC Aquatimer. Launched in 1967, it was IWC’s answer to the increasing popularity of scuba diving at the time.

Engineered to meet the needs of professional divers, it was made with the robust build and water resistance expected from tool watches, but the IWC Aquatimer had an identity of its own – the rotating bezel for the watch was under the glass and could be operated using a second crown on the side of the case.

Fast forward to today, the IWC Aquatimer is a foundation of the brand’s catalog, offering bold and durable watches for those who love exploring ocean depths. IWC continues to pay homage to their maritime heritage through tributes, with watches that commemorate ‘the father of evolution’, Charles Darwin, and scuba diving pioneer Jacques-Yves Cousteau.

With at least 300m water resistance, precision timing, and captivating designs that offer maximum legibility and contrast, the IWC Aquatimer is perfect for any expedition both below and above the seas.

Explore our selection of IWC Aquatimer watches for men and women at SwissWatchExpo.com.

A BRIEF HISTORY OF THE IWC AQUATIMER COLLECTION

Introduced in 1967, the IWC Aquatimer was the brand’s reaction to the growing popularity of scuba diving and sea exploration.

The first IWC Aquatimer (ref 812 AD) was already water resistant to 200 meters, and featured a unique rotatable bezel. Unlike its contemporaries, its bezel, used for adjusting diving time, is located under the crystal. This prevents it from being moved during the dive and accidentally extending diving time.

In the 1980s, Günter Blümlein stepped in as IWC’s CEO. The engineer and visionary is famous for the renaissance of three leading names in watchmaking – IWC, Jaeger LeCoultre, and A. Lange & Sohne. For IWC, one of his legacies was the partnership with Porsche Design.

This collaboration resulted in a revolutionary new watch, the IWC Aquatimer ref 3500 or Ocean 2000, introduced in 1983. Aside from having a titanium case and a unique, industrial look, it had a record depth of 2000 meters.

The Aquatimer was redesigned again almost three decades later in 2009. This new watch would form the look that we know today – thick chunky cases, scalloped bezels, and an external rotating bezel. Further redesign took place in 2014, which introduced the external/internal rotating bezel that we see today.

Since then, there have been many noteworthy IWC Aquatimer models that pushed the boundaries of what dive watches can do. A few notables ones are:

True to its heritage, all IWC Aquatimer watches, regardless of depth rating and features, allow the wearer to safely dive beneath the waters. Their stellar design makes them suitable for adventures on land, too.

ABOUT THE IWC AQUATIMER COLLECTION

The IWC Aquatimer collection today features the completely redesigned case. At the core of these models are chunky cases with inset sapphire glass and an external/internal rotating bezel.

Current models are also equipped with the IWC Quick-Change bracelet system, which allows the wearer to switch from a steel bracelet to a rubber strap (and vice versa) without the need for tools.

Here are the sub-collections available in the IWC Aquatimer family of watches:

IWC AQUATIMER AUTOMATIC
The collection’s most basic diving watch. These models feature the external/internal rotating bezel, hands and markers coated with bright luminescence, and a date display at 3 o’clock. All these are set against a black dial for easier reading in low light situations. Inside beats the IWC-manufactured 32111 caliber with 120 hours of power reserve.

IWC AQUATIMER CHRONOGRAPH
Combines the features of a dive watch and a stopwatch. The external/internal SafeDive bezel system ensures that the inner ring only operates counterclockwise, thus preventing the dive time to be accidentally extended. The caliber 79320, which is based on the legendary Valjoux 7750 movement, powers the stopwatch function of this timepiece.

IWC AQUATIMER CHRONOGRAPH “GALAPAGOS ISLANDS” EDITION
A special edition stainless steel watch coated with vulcanized rubber. Inspired by the black volcanic rocks of the Galapagos Islands, this watch has an all-black look. On the high-contrast dial, it features the external/internal rotating bezel with SafeDive system and an integrated flyback function. The in-house 89365 caliber movement powers this piece.

IWC AQUATIMER CHRONOGRAPH “EXPEDITION CHARLES DARWIN” EDITION
The first bronze watch in IWC’s history, this timepiece is a tribute to ‘the father of evolution’ Charles Darwin and to the expedition of vessels during his time. The choice of bronze is also a homage to his ship, the HMS Beagle, which carried him to his expedition to the Galapagos Islands. It also features functions essential for modern expeditions – the external/internal SafeDive system, rubber-coated pushers, and luminescent markers. On the case back is a portrait of Darwin. Inside beats the IWC-manufactured 89365 movement.

Each IWC model comes with a reference number to document their sale and manufacture. Modern IWC models have reference numbers that start with the letters IW, followed by six numbers – the first three tell us their watch family and complications, while the next three denotes the material.

Here are IWC Da Vinci reference numbers as of 2022:

WHAT IS AN IWC AQUATIMER WATCH?

The IWC Aquatimer is the brand’s flagship line of diver’s watches. Introduced in 1967, its internal rotating bezel set it apart from the tool watches of the era.

IWC recommends a complete service every five years to maintain your watch’s performance and accuracy. The intervals between each service will vary depending on how the watch is stored and used.

However, there can be signs that your watch already needs maintenance sooner than later. Read on for Signs It’s Time for Watch Maintenance.