The Da Vinci has been IWC’s playing field for numerous innovations and milestones, including the integrated perpetual calendar module and the world’s first wristwatch made in black ceramic. Introduced in 1969, the Da Vinci began as an integrated bracelet watch powered by the Beta 21, the first Swiss-made quartz caliber. The Da Vinci line has since expanded into a series of more complicated models including perpetual calendars, flyback chronographs, and tourbillons, all with unique and creative design language. Explore our collection of IWC Da Vinci watches at SwissWatchExpo.com. 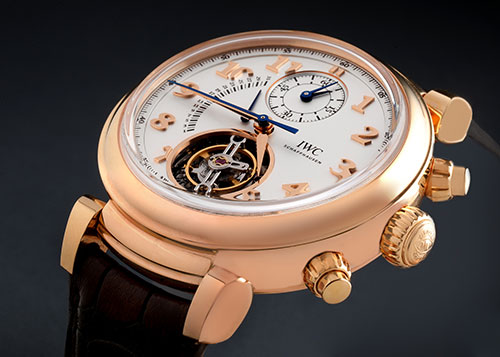 Introduced in 1969, the IWC Da Vinci has evolved and seen dozens of versions in its 50-year history. From its beginnings as a bold watch with a licensed new movement, to becoming a line of elegant timepieces with exquisite complications, the Da Vinci lives up to its name. Like the Italian Renaissance genius, it is indeed a disruptive collection.

The IWC Da Vinci has championed function and form since the beginning and has been a playing field for the brand’s many innovations. These include housing the first Swiss Beta 21 quartz movement, the groundbreaking integrated perpetual calendar module by Kurt Klaus, and one of the world’s first ceramic cases.

Today’s IWC Da Vinci collection is composed of round dress watches with an instantly recognizable form, as well as some of IWC’s most sophisticated complications.

Explore our selection of IWC Da Vinci watches for men and women at SwissWatchExpo.com.

The IWC Da Vinci has seen drastic evolutions in more than half a century, going from a big, bold watch to a collection of refined timepieces.

It traces its beginnings to the late 1960s, when the Swiss watchmaking industry was under serious threat from more modern Japanese quartz watches.

The Da Vinci Quartz Electronic ref 3501 came in a hexagonal case, graphic lines, and an integrated bracelet that is typically 1970s. This shape may feel unfamiliar with the rest of the modern IWC Da Vinci collection, but it has inspired tonneau-shaped watches since its introduction.

What started off as an avant garde piece evolved into a classically designed timepiece by 1985. In those years, Kurt Klaus was the head designer at IWC. With clients all over precise, electronic quartz watches, Klaus persevered with the improvement of the perpetual calendar. His ingenious integrated perpetual calendar module meant that all the settings could be done via the crown, and it could be affixed on basically any type of watch – from a three-hander to a chronograph.

The design by Hano Burtscher made it even more iconic. A double tiered case, articulated bar lugs, and mushroom shaped pushers gave it an interesting look that has become immediately recognizable.

On Thursday, 11 April 1985, at the Basel Watch Fair, IWC introduced the Da Vinci ref 3750. It became immediately successful, and symbolized the return of fine timepieces after a decade of dominance by electronic watches.

Another first would come along in 1986, with the creation of the Da Vinci Perpetual Calendar ref 3755 – the world’s first wristwatch made of scratch-resistant zirconium oxide ceramic.

The refined IWC Da Vinci has been in constant production since then and has continued to improve through the years:

The fourth generation of the IWC Da Vinci was released in 2017, which pays homage to the iconic model of 1985. The round, double-tier case and striking lugs were given a modern twist, while keeping the Italian-inspired design of the older Da Vinci.

Today, the IWC Da Vinci is home to technical innovations, while keeping the baroque flair and exquisite aesthetic the line has been known for.

ABOUT THE IWC DA VINCI COLLECTION

The IWC Da Vinci collection today has a varied range of sizes from 36 to 44mm, and comes in time only, moon phase, chronograph, and diamond set editions. In true Da Vinci style, the crowning glory of the collection are highly complicated models like the perpetual calendar and tourbillon.

Here are the sub-collections available in the IWC Da Vinci family of watches:

IWC DA VINCI CHRONOGRAPH
The Da Vinci Chronograph “Laureus Sport for Good Foundation” is part of a series of watches that IWC creates in support of sports projects around the world. This limited edition comes with a blue sunray motif dial and chronograph sub-dials at 6 and 12 o’clock.

IWC DA VINCI PERPETUAL CALENDAR CHRONOGRAPH
The contemporary interpretation of Kurt Klaus’ legendary perpetual calendar. Featuring the classical circular case, all focus is on the harmonious dial, with displays for the date, month, and year; a moon phase indicator, and hour and minute sub-dials. The moon phase display departs by just 1 day in 577 years from the actual phase of the moon.

IWC DA VINCI TOURBILLON RÉTROGRADE CHRONOGRAPH
Thanks to its IWC-manufactured Calibre 89900, this haute horology masterpiece unites three complications in one harmoniously designed dial. The tourbillon is placed at 6 o’clock, the chronograph sub-dial at 12 o’clock, and the retrograde date on a gentle arc from 8 to 10 o’clock. Its hand jumps back automatically to the first of the month after the 31st.

Each IWC model comes with a reference number to document their sale and manufacture. Modern IWC models have reference numbers that start with the letters IW, followed by six numbers – the first three tell us their watch family and complications, while the next three denotes the material.

Here are IWC Da Vinci reference numbers as of 2022:

WHAT IS AN IWC DA VINCI WATCH?

The IWC Da Vinci, named after the famous Italian Renaissance man, is a haven for elegant, European-style watches and many of the brand’s innovations.

Watches in this collection are especially prized for their neatly designed dials that often feature several complications, plus the touch of flamboyance that the design offers. Sizes range from 36 to 44mm, with models for men and women.

IWC Da Vinci watches have a depth rating of 3 bar or 30 meters. With this level of water-resistance, the watch can be worn for light water sports or when skiing. However, we note that a watch’s water-resistance is not permanent and is subject to wear and tear over time. Regular service is advised to keep your timepiece accurate and water resistant.

In general, IWC recommends a complete service every five years to maintain your watch’s performance and accuracy. The intervals between each service will vary depending on how the watch is stored and used.

However, there can be signs that your watch already needs maintenance sooner than later. Read on for Signs It’s Time for Watch Maintenance.