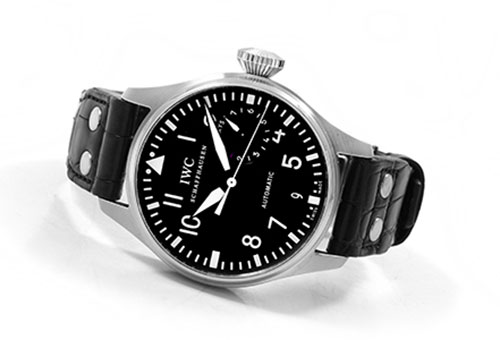 The IWC Pilot’s Watch embodies the spirit of aviation. Introduced in the mid-1930s, the Pilot’s Watch collection was tailored to meet the functional requirements of aviation and the specific needs of pilots and explorers. IWC Pilot’s watches have earned fans beyond the industry and are sought after by watch fans today for their extreme robustness and high versatility. The collection now includes a vast range of models, including sought-after collaborations like the Top Gun, Le Petit Prince, and Antoine de De Saint Exupéry lines – celebrating the long-lasting relationship between IWC and the world of aviation. Explore our collection of IWC Pilot’s Watches at SwissWatchExpo.com. 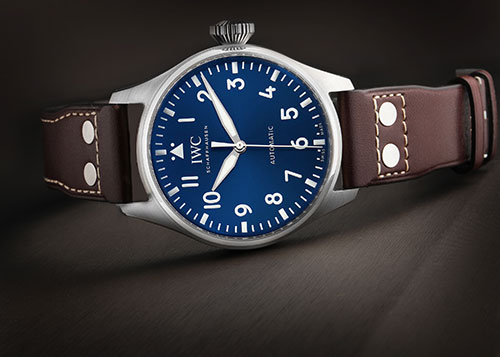 A pilot’s watch is considered a cornerstone of any watch collection, loved for their practical use and ruggedly handsome aesthetic. IWC has a long and rich heritage of creating pieces worn by aviators and the military, and they continue this tradition in the modern Pilot’s Watch collection.

IWC created their first aviation wrist watch in 1936 with the Spezialuhr für Flieger (Special Pilot’s Watch), and followed it up with the massive 55mm reference IW431, built for the German armed forces in 1940. These watches set technical and aesthetic benchmarks for the pieces in today’s Pilot’s Watch collection.

The brand revived their Pilot’s watch family in 1994, and today, the range runs the gamut. One can choose from different functions – from classic time-only models, to chronographs, world timers, annual and perpetual calendars, and even tourbillons. With diameters ranging from 36 to 46mm, and case options including steel, ceramic, and precious metals, there are plenty of IWC Pilot’s watches for men and women to choose from.

Explore our selection of IWC Pilot’s Watches at SwissWatchExpo.com.

A BRIEF HISTORY OF THE IWC PILOT’S WATCH

The Pilot’s Watch collection is IWC’s flagship line, whose designs descend from timepieces dating back to the 1930s - the early days of aviation.

The originator of the Mark Series was the watch named Spezialuhr für Flieger (Special Pilot’s Watch). Earlier models were used by the military; and in 1949, IWC developed ones built specifically for the British Army. The Mark XI, perhaps IWC’s best known vintage pilot’s watch, was specifically built to help the Royal Air Force navigators during their dead reckoning duties.

Produced for the RAF beginning 1948, the IWC Mark XI was a precision wristwatch for pilots powered by the chronometer-grade Caliber 89. It performed so well that the RAF used it until 1984. With its high contrast dial and sans serif Arabic numerals, the Mark XI served as the standard for the contemporary IWC Pilot’s Watch.

The second generation of watches that connects to today’s Pilot’s Watch were created in 1940. That year, IWC became one of the five suppliers of the beobachtungsuhr, or “B-uhr” for the Luftwaffe, or the German air force during World War II.

Designed according to air force standards, the B-uhren were oversized, measuring 55mm and equipped with pocket watch movements. These massive timepieces left such a huge mark on pilot’s watches that we still see elements of it in contemporary pieces.

The reference 431, which IWC nicknamed the “Grosse Fliegeruhr” or “big pilot’s watch” was quite literally the first Big Pilot’s Watch made by the brand.

The introduction of the Mark XII in 1994 marked IWC’s next wind of creating pilot’s watches, all taking inspiration from the Mark XI. At the turn of the millennium, the Grosse Fliegeruhr was also revived when the Big Pilot’s Watch ref. 500201 (more popularly known as the 5002) made its debut at Baselworld 2002.

In the following decades, IWC has made strides in bridging their archival pieces with modern needs. The Mark Series was revamped to give the watches a more modern look. The case size grew to 39mm (later on settling to 40mm) and the dial played down to include only the essentials.

Meanwhile, the Pilot and Big Pilot’s Watches lines have played host to a range of complications – from chronographs and rattrapante, to perpetual calendars and tourbillons.

There were also various partnerships formed through the years that celebrate the military and aviation heritage of IWC – these include collaborations with the United States Navy Strike Fighter Tactics Instructor program (better known as TOP GUN) and the Antoine de Saint Exupéry Foundation, which remembers the life and work of the noted French pilot and author.

Today, the IWC Pilot’s Watch collection enjoys global renown and has gained an audience among casual watch collectors who seek robust, precise, and rugged timepieces. Athletes and celebrities also love the Big Pilot – it counts the likes of Lewis Hamilton, Tom Brady, Bradley Cooper, and Michael Jordan among its fans.

ABOUT THE IWC PILOT’S WATCH COLLECTION

The IWC Pilot’s Watch collection is composed of a wide range of watches that celebrate the brand’s aviation and military heritage.

They can be segmented into five categories: Classic, Spitfire, Top Gun, Le Petit Prince, and Antoine De Saint-Expuéry. Under these categories are watches with the trademark “instrument” look and a large number of iterations of complications, materials, and features.

Here are the sub-collections available in the IWC Pilot’s Watch family of watches:

IWC PILOT’S WATCH
Classic timepieces based on pilots' instruments of the 1930s and '40s. These are mostly stainless steel models inspired by the famous Mark XI pilot's watch or the Grosse Fliegeruhr with sans serif Arabic numerals.

IWC BIG PILOT’S WATCH
Bigger Pilot’s watches that continue the legacy of the Grosse Fliegeruhr from 1940. These are distinguished from the Pilot’s Watch with their larger cases, onion-shaped or conical crowns, and and the classic Baumuster A dial.

All Big Pilot’s Watches since the ref. 5002 have been equipped with in-house IWC calibers. This sets them apart from other Pilot’s Watches which may sometimes rely on third-party movements.

IWC PILOT’S WATCH SPITFIRE SERIES
The Spitfire series first appeared in 2001 with a limited series of 1,000 watches. Named after the legendary British single-seat fighter aircraft, these boast of vintage-inspired aesthetics whose materials are typically rustic bronze or stainless steel.

IWC PILOT’S WATCH MARK SERIES
Compact timepieces that uphold the tradition of the iconic Mark XI pilot’s watch. These are characterized by smaller cases (36 – 40mm) and high-contrast dials reduced to the absolute essentials.

IWC BIG PILOT’S WATCH TOP GUN SERIES
Watches produced in collaboration with the Strike Fighter Tactics Instructor Program within the U.S. Navy, introduced in 2007. These are made of robust and corrosion-resistant materials like ceramic and titanium (or Ceratanium which combines both materials). This means they are capable of handling maneuvers at sea, as well as damp and salty air.

IWC BIG PILOT’S WATCH PERPETUAL CALENDAR
Combines two creations that are quintessentially IWC – the Big Pilot, and the Perpetual Calendar, developed in the 1980s by IWC’s then chief watchmaker Kurt Klaus. The large dial of the Big Pilot lends itself well to the mechanism’s many features, and is widely recognized for its harmonious four-subdial display which makes reading calendar information a breeze.

IWC BIG PILOT’S WATCH SHOCK ABSORBER
The newest model in the Big Pilot’s collection, the Shock Absorber XPL boasts of one of the world’s most advanced anti-shock systems, which is resistant to up to 30,000 G. This is made possible through IWC’s patented SPRIN-g PROTECT system which shields the movement from impact.

IWC models are assigned reference numbers to properly document their sale and manufacture. Modern IWC models have reference numbers that start with the letters IW, followed by six numbers – the first three tells us their watch family and complications, while the next two denotes the material used for the watch.

Here are IWC Pilot’s Watch collection reference numbers as of 2022:

IWC Pilot’s Watches pay homage to the brand’s long and rich history of creating watches for aviation and military use. Here are the most common questions about the IWC Pilot’s Watch collection.

WHAT IS AN IWC PILOT’S WATCH?

The IWC Pilot’s Watch collection is composed of contemporary takes on the brand’s vintage aviation watches made for the air force and military.

Pieces from this collection resemble their historical predecessors from the early 1940s, whose hallmarks are luminous Arabic numerals and indices, sword hands, and a pilot's triangle at 12 o'clock – all of which work together to provide optimal readability.

The current collection contains a wide variety of models, from three-hand watches and chronographs to to watches with perpetual calendar, moon phase, and tourbillon complications. The case materials are just as diverse and include stainless steel, gold, platinum, titanium, bronze, ceramic, and Ceratanium, the brand’s patented blend of ceramic and titanium.

However, we want to note that a watch’s water-resistance is not permanent. Its sealing systems may wear and tear with age and usage. Regular maintenance and service is recommended to preserve your watch’s accuracy and water resistance.

HOW OFTEN DO I NEED TO SERVICE MY IWC PILOT’S WATCH?

Like any precision mechanical instrument, the IWC Pilot, and any watch from IWC Schaffhausen, needs regular care and maintenance.

IWC recommends a complete service every five years, but this could vary depending on how your watch is stored and used.

A full service includes disassembling of the watch, testing of timekeeping accuracy and waterproofing, replacement of parts as needed, and polishing.

There can be signs that your watch already needs maintenance even before this prescribed period. Here are some Signs It’s Time for Watch Maintenance.