The IWC Portofino is a minimalist and sophisticated line of dress watches. Introduced in 1984, the Portofino was a response to the quartz watches of the time, aimed at bringing back the dignity and grace of pocket watches, but meant to be worn on the wrist. Equipped with mechanical movements and an eclectic mix of complications, it diversified the IWC range. Round cases made of polished gold or stainless steel emphasize its refined design, which pairs nicely with formal and evening wear. This collection comes in styles for men and women, with the latter having the option of diamond dials and bezels. Explore our collection of IWC Portofino watches at SwissWatchExpo.com. 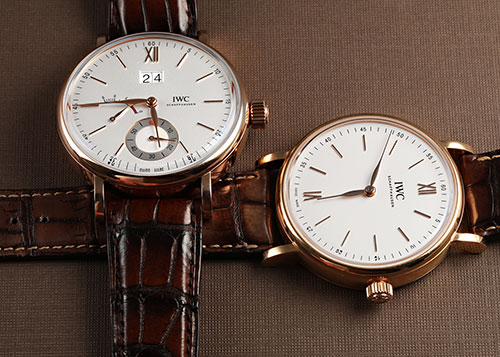 Minimalist and sophisticated, the IWC Portofino has become the epitome of excellent taste. Introduced in 1984, the collection brought to life the elegance of vintage pocket watches, and continued IWC’s tradition of crafting classic, round timepieces.

Polished cases, graceful lugs, narrow hour markers, and slim feuille hands underscore the luxurious design of the Portofino. Women’s models are enriched with mother of pearl dials and diamonds on the bezel.

However, the Portofino is not just a beautiful timepiece. The collection is now home to a repertoire of complications like the chronograph, eight-day power reserve, moon phase display, perpetual calendar, retrograde, and tourbillon, making each model both an aesthetic and technical masterpiece. Explore our selection of IWC Portofino watches for men and women at SwissWatchExpo.com.

A BRIEF HISTORY OF THE IWC PORTOFINO COLLECTION

The history of the IWC Portofino watch family began in the late 1970s. Following a period of upheaval brought about by quartz and digital timepieces, IWC noted an increasing demand for timeless and elegant models.

To fill this need, IWC looked to one of the most prolific watchmakers in history, Jean-Antoine Lépine. The French watchmaker is renowned for the invention of the modern pocket watch, and the Lépine calibre which resulted in the creation of the first genuinely thin watch. Following Lépine’s ethos, IWC sought to come up with a timepiece that combined technical quality with aesthetic design.

The iconic IWC Lépine open-face pocket watch from the 1970s (reference 5201) became the prime inspiration for this new collection. For this new design, the IWC Lépine’s dial was rotated to 90 degrees, and a moon phase display was added at 3 o’ clock. It was designed like a pocket watch, but meant for the wrist. The new reference 5251, unveiled in 1984, went by the name “Portofino”.

The name was taken from the picturesque former fishing village of Portofino near Genoa, Italy, which has epitomized the unhurried way of life in southern Europe. Since then, the Portofino collection has been one of IWC’s core watch families. The timelessly elegant design became a symbol of good taste.

More features were added to the Portofino line of watches, while keeping its minimalist design.

In 1988, the IWC caliber 630 introduced a hybrid chronograph movement into the Portofino family, meeting that sweet spot between functionality and sophistication.

Then, in 1993, we saw most probably the slimmest of all IWC watches: the Hand-Wound Portofino. This was followed by the Romana Perpetual Calendar reference 2050, which was produced from 1995 to 2001.

To meet the growing preference for larger case sizes, the IWC Portofino was resized to 38mm in 2003. While keeping the classical design, the new contemporary size made it attractive to a wider variety of audiences.

Today, the Portofino range includes understated models with cases measuring 34mm to as big as 45mm, and features a repertoire of complications including the chronograph, eight-day power reserve, moon phase, perpetual calendar, and tourbillon. Subtle luxury is also displayed with the addition of modern colors such as slate and olive green, and diamonds on the bezel and dial.

Over the past 30 years, the Portofino watch collection has welcomed a stream of new timepieces and complications. Complications and embellishments may have been added to the Portofino line, but the focus has always been on understated elegance.

ABOUT THE IWC PORTOFINO COLLECTION

Today’s IWC Portofino line ranges from understated models, to watches with big complications and even diamond and mother of pearl styles.

Here are the sub-collections available in the IWC Portofino family of watches:

IWC PORTOFINO AUTOMATIC
The classically elegant three-handed model, and the most popular watch within the Portofino family. The original version of this model measures 40mm, and it has more recently been offered in smaller 37 and 34mm models for those with narrower wrists. The 40 and 37mm models also come with date display at 3 o’clock; the 40mm version comes with a choice of a mesh strap.

Case size: 40, 37 and 34mm
Material: Stainless steel or rose gold; with options of diamond bezels for 37 and 34mm models.

IWC PORTOFINO CHRONOGRAPH
The IWC Portofino with a vertical chronograph design. The larger 42mm models come with day and date display, and chronograph hours, minutes, and seconds; while the 39mm version comes with chronograph minutes and seconds. Rose gold models feature a special engraving of the Portofino harbor on the case back.

Case size: 42 and 39mm
Material: Stainless steel or rose gold; with options of mesh bracelets for the 42mm models.

IWC PORTOFINO HAND-WOUND EIGHT DAYS
The IWC Portofino Hand-Wound Eight Days impresses with a 192-hour power reserve, thanks to the in-house caliber 59210. A power reserve indicator at 9 o'clock lets you know when you need to wind the movement. This timepiece also features a date display at 3 and a small seconds dial at 6 o'clock.

The hand-wound model measures 45mm, and features a moon phase indicator at 12 o’clock, small hacking seconds at 6 o’clock, and a date display at 3 o’clock. It also comes with eight-day power reserve, which is shown through an aperture at 9 o’clock.

The automatic moon phase model comes in smaller at 40mm, and features a moon phase indicator at 12 o’clock, in addition to the hour markers.

IWC PORTOFINO TOURBILLON
The Portofino collection entered the world of haute horlogerie with the IWC Portofino Hand-Wound Tourbillon Retrograde – the collection's most complex model. As its name states, it features a tourbillon at 6 o’clock, a retrograde display that stretches from 8 to 10 o’clock, and a third complication with the eight-day power reserve at 3 o’clock.

Here are IWC Portofino reference numbers as of 2022:

The IWC Portofino is a prime example of understatement and elegance in timepieces. Here are some of the most frequently asked questions about the IWC Portofino collection.

WHAT IS AN IWC PORTOFINO WATCH?

The IWC Portofino is a collection of round and classically designed watches. Inspired by Lépine or open-faced pocket watches, they are characterized by puristic design and simple, uncluttered dials with slim hands and markers.

IWC Portofino watches are available in time-only, chronograph, moon phase, retrograde and tourbillon models, with versions for men and women.

IWC Portofino watches are water resistant up to 3 bar (30 meters). With this level of water-resistance, the watch can be worn when swimming or skiing. However, it should be noted a watch’s water-resistance is not permanent. Your watch’s sealing systems are subject to wear and tear – therefore regular service is recommended to keep a timepiece accurate and water resistant.

IWC generally recommends a complete service every five years to maintain your watch’s performance and accurate timekeeping. The intervals between each service can vary depending on how the watch is stored and used. A full service includes disassembling the watch, rigorous testing of the timekeeping accuracy and waterproofing, replacement of parts as needed, and polishing.

However, there can be signs that your watch already needs maintenance even before this period. Read on for Signs It’s Time for Watch Maintenance.