The Omega De Ville collection merges traditional watch design with modern touches and state-of-the-art movements. It offers a vast range of dress watches – most simple in design and affordably minded, while some cross into the haute horlogerie territory. Gems from the collection include the Ladymatic, a line of women’s dress watches adorned with precious materials such as diamonds and mother of pearl; and the DeVille Tourbillon, the first tourbillon watch to receive a Master Chronometer certification. Explore our collection of Omega De Ville watches at SwissWatchExpo.com. 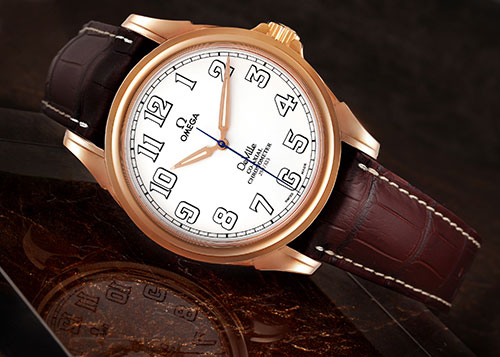 The Omega De Ville is one of the most underrated collections within Omega’s catalog. While Omega is best known for their sports chronographs and diving watches, the De Ville range is home to dress watches with a vintage touch and modern calibers.

Due to their classically elegant designs, De Ville watches are perfect accessories for the office or more formal occasions. The De Ville family offers a wide range of choices with its sub-collections: the Prestige gives a modern twist to mid-century round watches; the Trésor offers luxurious timepieces best matched to black ties and evening gowns; the Ladymatic dazzles with mother of pearl dials and diamonds, while the Tourbillon breaks barriers with the first ever Master Chronometer manual winding central tourbillon.

A BRIEF HISTORY OF THE OMEGA DE VILLE

The Omega De Ville line began as a sub-collection within the broader Seamaster range, before it branched off into its own family of watches in 1967. Since then, the De Ville has embodied sophisticated style that serves as an alternative to Omega’s popular sports models.

The name and new collection also embodied a new identity – it was the first collection not manufactured at Omega’s headquarters in the watch metropolis of Bienne, but in the capital, the cosmopolitan Geneva. It cemented its place in the catalog as a line of watches with sleek design and reliable movements.

In the 1970s, after just 10 years of production, the Omega De Ville won a couple of awards from highly-regarded bodies: the Grand Prix Triomphe de l’Excellence Européenne awarded by the Committee of European Excellence, and six Baden-Baden Golden Rose design awards.

Over the next couple of decades, the Omega De Ville would remain a mainstay in Omega’s portfolio, and the brand continued to improve on it.

In 1999, the De Ville Co-Axial became the first Omega watch to be created with the new Co-Axial calibre. Invented by George Daniels, the Co-Axial mechanism was groundbreaking: it was the first practical mechanical escapement watch to be launched in two centuries.

Less than a decade later in 2007, Omega manufactured the new automatic calibre 8500, one of the initial Co-Axial movements to be developed by the company's workshop, and equips the De Ville with it. This development led to the Omega De Ville Hour Vision, which displays a complex level of workmanship and an impressive dial protected by scratch-resistant sapphire crystal.

By the 2010s, Omega streamlined the De Ville collection into four families of dress watches, each with their own unique offering. The Prestige gives a modern twist to mid-century round watches; the Trésor offers luxurious timepieces best matched to black ties and evening gowns; the Ladymatic dazzles with mother of pearl dials and diamonds, while the Tourbillon expands the De Ville into haute horlogerie territory.

To this day, Omega De Ville’s current editions still combine traditional dress watch designs with the latest technology. Omega’s commitment to both progress and timelessness has helped maintain its position as an icon in the watchmaking industry.

ABOUT THE OMEGA DE VILLE COLLECTION

The Omega De Ville collection currently has four sub-collections under its name, all tied together with dressy and classically elegant aesthetics.

OMEGA DE VILLE LADYMATIC
First introduced in 1955, the Ladymatic was one of the first self-winding watches created exclusively for women. It was revived by Omega in the 2010s, with Co-Axial movements giving entirely new meaning to the collection.

Today’s Ladymatic watches come in 34mm case sizes, with exquisitely designed dials. One can choose between a Supernova pattern or mother of pearl dials in a choice of many dynamic colors. Adding to the elegant style, each dial has a date window at 3 o’clock and 11 diamond-set hour markers.

OMEGA DE VILLE TRESOR
The Omega De Ville Trésor collection offers classically styled dress watches with thin cases and minimalist applied markers and hands. The Trésor name – which means "treasure" in French – is a reference to the top-notch movement that powers the watch.

The current range is composed of women’s quartz models adorned with diamonds, while men’s models offer vintage spirit with some of today’s most advanced mechanical movements, including those at the Master Chronometer standard.

OMEGA DE VILLE PRESTIGE
The Omega De Ville Prestige is the epitome of purity in design, tapping into Omega’s mid-century models and offering them with modern aesthetics and movements. Round cases, straight lugs, minimalist dials in a variety of shades, and a choice between leather straps and metal bracelets completes any wardrobe.

OMEGA DE VILLE TOURBILLON
The central tourbillon was first introduced to the Omega De Ville family in 1994. It made a comeback in 2020, this time in a Master Chronometer edition. Omega’s take on the tourbillon features their exclusive Central Tourbillon movement, whose position gives the dial a supremely elegant and balanced look. Its design elements also make it a wearable work of art: the tourbillon cage comes with hand polished bevels in black ceramized titanium, while the case, crown, and hour markers are Sedna gold.

AAA – the first three digits denote the collection or family of watches. Below are the respective numbers for the De Ville collections:

WHAT IS AN OMEGA DE VILLE WATCH?

The Omega De Ville collection is home to the brand’s dress watches. These timepieces are world renowned for combining traditional watch design with modern touches and state-of-the-art movements. It offers a vast range of designs, from three-hand models to haute horlogerie creations.

There are four sub-collections in the current range: Ladymatic, Tresor, Prestige, and Tourbillon.

WHAT IS THE WATER RESISTANCE LEVEL OF OMEGA DE VILLE WATCHES?

Being dress watches, Omega De Ville models are water resistant for up to 100 meters or 330 feet.

This level of water resistance makes it a splash-proof watch - ideal only for daily wear and very minimal water exposure.

HOW OFTEN SHOULD AN OMEGA DE VILLE WATCH BE SERVICED?

Your watch’s service frequency would depend largely on how it is used and stored, and the environment in which it is often worn.