The Omega Planet Ocean is a homage to the brand’s rich legacy of marine exploration. It joined the Seamaster collection in 2005 as a line of watches for professional and recreational divers. Equipped with robust cases, a unidirectional bezel, luminous hands and indices, and 600m water resistance, the Planet Ocean is equal parts capable, stylish, and elegant. Explore our collection of Omega Seamaster Planet Ocean watches at SwissWatchExpo.com. 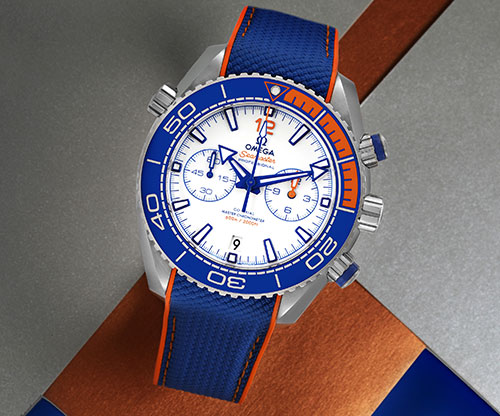 Launched in 2005, the Omega Planet Ocean is a relatively new addition to the Omega family. It joined the Omega Seamaster collection as a line of watches for professional and recreational divers, merging extraordinary waterproof capabilities and creative design.

The Omega Planet Ocean’s aggressively sporty look, combined with novel materials, state-of-the-art movements, and various evolutions, have made it the choice sports watch not just of divers, but of the jet-set and watch collecting community. While it boasts of 600m water resistance and anti-magnetic properties, it’s never too serious in its design – with a wide range of colors, materials, and straps on offer, the Planet Ocean is actually a fun and approachable watch.

Equipped with state-of-the-art movements, and an avenue for Omega’s best marketing collaborations, it’s no surprise that the Planet Ocean has become one of the brand’s best-selling lines. Explore our collection of Omega Seamaster Planet Ocean watches at SwissWatchExpo.com.

A BRIEF HISTORY OF THE OMEGA PLANET OCEAN

Omega has a rich legacy of ocean exploration, beginning with the Marine, its first commercially available diver’s watch introduced in 1932. In 1948, as part of Omega’s 100th anniversary, the Omega Seamaster was launched, marking the beginnings of its longest running product line.

In the early 2000s, Omega sought to build on the Seamaster collection with a watch that can be used for greater depths and prolonged diving periods. Inspired by the ref 165.024 from 1967, the Omega Planet Ocean took the form of a robust part-round, part-tonneau shaped watch, with a greater water resistance of 600m, and a helium escape valve to aid in decompression during saturation dives.

The first generation of Omega Planet Ocean watches can be easily distinguished from newer versions. They began with aluminum bezel inserts and solid metal case backs with Omega's signature Hippocampus (seahorse) motif engraved. These watches were also powered by the caliber 2500, which was largely based on the ETA 2892-A2.

Newer generations received a couple of upgrades: the in-house caliber 8500 designed from the ground up with a Co-Axial escapement, and a sapphire crystal display case back which allows the wearer to see the workhorse movement inside.

Ceramic has also played an important role in the Omega Planet Ocean’s evolution. It was in 2012 that the aluminum unidirectional bezel was upgraded to scratch-resistant ceramic, and by 2016, Omega would unveil the Planet Ocean 600M Deep Black – the first real dive watch made exclusively from the material. Even the crown, dial, and helium escape valve were made of ceramic.

Throughout its 17 year history, the Omega Planet Ocean has undergone numerous changes and improvements, never once missing the essence of the collection – that of robust and capable watches, with a fun and stylish vibe.

ABOUT THE OMEGA PLANET OCEAN COLLECTION

Introduced in 2005, the Omega Planet Ocean was positioned as a stylish, luxury offering within the Seamaster line, paired with extraordinary waterproof capabilities. These qualities, combined with a versatile design and striking colorful branding, gave Omega another winner on their hands.

From just 3 models, the Planet Ocean line has grown to more than a hundred variations. Here are the different types of Planet Ocean watches:

With a water resistance of 600m, the Planet Ocean comes in between the Seamaster Diver 300m and the PloProf 1200m. It was unveiled as a modern dive watch that also looks good enough for everyday, all-occasion use.

The first collection was available in two sizes: 42mm and 45.5mm. Both were equipped with aluminum unidirectional bezels, and a Helium Escape Valve for saturation diving. In 2006, Omega added the Planet Ocean Chronograph to the collection.

Omega has been known to test innovations on the Planet Ocean range before going full-scale. In 2009, Omega introduced the LiquidMetal to the market through the limited edition Omega Planet Ocean ref. 222.30.42.20.01.001.

LiquidMetal is a malleable protective alloy applied over the ceramic bezel. Its purpose is to protect the ceramic from discoloration, to strengthen the material, and also to fill the recessed numbers on the bezel, where dirt can sometimes accumulate.

Omega knew that in order to compete with the likes of the Rolex Submariner, it had to constantly improve. Five years after its launch, the Planet Ocean was equipped with a new movement and a number of aesthetic improvements.

Caliber 2500 was replaced with Caliber 8500, which adopts the use of a silicon escapement and hairspring, thus extending its power reserve to 60 hours. It also allows for an independent hour hand and finally made way for an exhibition caseback (versus the steel caseback of the first generation). Noticeable aesthetic changes were also applied:

Case size: introduction of a 37.mm case size in addition to 42 and 45.5mm
Color ways: blue and white bezels and dials, in addition to black and orange
Metals: they also offered a Titanium model, in addition to stainless steel Larger and more detailed indices, hour markers, and Seamaster logo In some models, they also applied glossy dials and the LiquidMetal bezel

This generation of Omega Planet Ocean are considered the transitional models, where Omega tested elements that would make a more successful design language for the brand.

In 2013, Omega introduced the GMT function to the Planet Ocean line. The Planet Ocean GMT features an independently adjustable hand that works with a 24-hour bezel and a new case size measuring 43.5mm.

It follows the design language of the Planet Ocean line, with a few enhancements to help distinguish the GMT function: an orange tipped GMT hour hand and 24-hour bezel markers, as well as an orange “GMT” line below the Seamaster text on the dial, in lieu of “Professional”.

With the LiquidMetal bezel fully integrated into the Planet Ocean line, Omega upped the ante with the third generation design. This time, they combined LiquidMetal with galvanized rubber on the bezel, creating a look that’s striking, without the shine.

The black LiquidMetal bezel comes with a 15-minute scale that’s made of orange galvanized rubber. The dial was also changed from matte to polished black ceramic. The effect is a contrast of textures, and if the goal is to keep things interesting, Omega was successful in doing so.

Of course, Omega also went beyond aesthetics and made technological improvements:

Movement: Caliber 8500 was replaced with Caliber 8900. The first Master Chronometer movement from Omega, it’s accurate between 0 to +5 seconds per day, and is also magnetic resistant up to 15,000 gauss.
Bracelet: the bracelet was also refined to fit better on the wrist, to keep the watch from falling past the lugs.

As one would expect from Omega, there are a myriad of special editions and collaborations under the Planet Ocean line. Some of the best known examples have revolved around the Olympic Games, and the world’s most accomplished Olympian, Michael Phelps.

Aside from these sport-related collaborations, the Planet Ocean collection has also included limited-edition James Bond models.

The collection began as a series of prototypes tested during the Five Deeps Expedition in 2019, where the pieces reached the deepest place on Earth.

The Omega Planet Ocean may have a short history, but it has proven itself as a versatile line of watches that gets better with time.

WHAT IS AN OMEGA PLANET OCEAN?

The Omega Seamaster Planet Ocean 600M is a collection of diving watches for professional and recreational divers.

These watches are part round, part tonneau-shaped, come in various metals and materials, and feature a helium escape valve and unidirectional rotating bezel. They are water-resistant to 600m (2,000 feet). Equipped with state-of-the-art calibers, they are also resistant to shocks and magnetic fields.

WHAT IS THE WATER RESISTANCE LEVEL OF OMEGA PLANET OCEAN WATCHES?

The main collection of the Omega Planet Ocean is equipped with 600m (2,000 feet) water resistance, from the time-only models to the GMT, Chronograph, and ceramic sub-collections.

HOW OFTEN SHOULD AN OMEGA PLANET OCEAN BE SERVICED?

Your watch’s service frequency would depend largely on how it is used and stored, and the environment in which it is often worn. If a watch is worn during diving, it’s crucial to maintain its level of water resistance, which can be affected by aged gaskets or by accidental shocks.