The Patek Philippe Gondolo collection celebrates “form” watches – rectangular, tonneau- or cushion-shaped cases – that depart from the ubiquitous round profile. Launched in the early 1990s, these watches take inspiration from vintage Patek watches created for the Brazilian elite in the 1910s. The modern Gondolo collection brings back the strong lines, geometric simplicity, and elegant Art Deco style that coincided with Patek’s golden age. Explore our selection of Patek Philippe Gondolo watches for men and women at SwissWatchExpo.com. 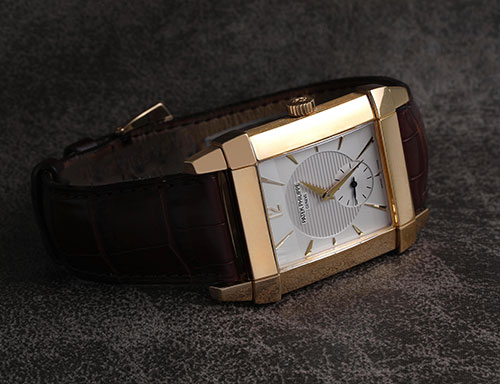 The Patek Philippe Gondolo collection represents the brand’s “form” watches. A step away from the traditional round watch, these come in rectangular, tonneau, cushion, and barrel shapes, and are made exclusively in precious metals.

Introduced in 1993, the Gondolo is a relatively young collection, but its history goes back many decades. The Gondolo name is a homage to the partnership between Patek and Brazilian watch dealer Gondolo & Labouriau, which began in 1872. A third of Patek Philippe’s sales at the time were sold through this partnership, marking an important part of the brand’s history.

As this golden age also coincided with the Art Deco era, Gondolo watches are heavily influenced by the movement. Clean lines and geometric simplicity are present in all models, even in haute joallerie styles that feature diamonds and pearls. Each Gondolo design dips into the storied history of Patek Philippe, offering 20th century elegance in the modern era.

Explore our selection of Patek Philippe Gondolo watches at SwissWatchExpo.com.

A BRIEF HISTORY OF THE PATEK PHILIPPE GONDOLO

Officially launched in 1993, the Gondolo is one of the newest collections of Patek Philippe, but it has a compelling history that goes back centuries. The name Gondolo is taken from Gondolo & Labouriau, a Brazilian watch dealer whom Patek Philippe had a fruitful partnership with beginning in 1872.

The company sold its first piece – a silver pocket watch – to the Rio de Janeiro-based jeweler in the same year. This sale set the partnership in motion, resulting in thousands of pieces sold. In fact, sales to Gondolo & Labouriau formed a third of Patek Philippe’s sales at the time.

These special watches were commissioned by Gondolo & Labouriau for members of an exclusive watch collecting club called The Gondolo Gang. Composed of about 180 members from the Brazilian elite, membership to the gang required the purchase of a Patek Philippe pocket watch costing 790 Francs.

However, there was a twist. Members did not have to pay for the watch up front but were instead asked to subscribe to the “Plano do Club Patek Philippe System”, where the gang bills each member 10 Francs for 79 weeks. To keep things more interesting, Gondolo & Labouriau also held weekly lotteries wherein one lucky winner would be relieved of succeeding payments. These lotteries became extravagant picnics where the members wore straw hats with the word “PATEK” emblazoned on them.

These gatherings ingrained the name “Patek” in Brazilian society, with the brand’s name even becoming synonymous for the word “watch”.

Following these pocket watches, Patek Philippe began creating other designs for Gondolo & Labouriau in 1910. Inspired by Art Deco design, which was prevalent at the time, these watches came in “shaped” cases or non-round silhouettes, such as square, rectangular tonneau, barrel, or cushion-shaped.

Patek Philippe continued to supply Gondolo & Labouriau with these timepieces until 1927.

In 1993, Patek introduced the Gondolo collection. Inspired by heritage pieces from the early 20th century, this collection houses their non-round watches, many of which have distinct Art Deco style.

While most of the watches in the Patek Philippe portfolio boast the traditional round case, watches in the Gondolo collection feature strong lines and geometric simplicity, coupled with unusual case shapes. They also come with subtle infusions of modernity – updated manually wound calibers, as well as quartz and automatic movements, and options between sportier contemporary designs and opulent haute joallerie versions.

Even with a vast array of designs on offer, the Patek Philippe Gondolo maintains a distinct character all its own, making it the choice of luxury watch enthusiasts who are looking for unique timepieces.

ABOUT THE PATEK PHILIPPE GONDOLO COLLECTION

The Patek Philippe Gondolo collection offers watches of all shapes and sizes, usually inspired by heritage pieces and infused with modern upgrades. Here are some notable models in the collection.

A tonneau or barrel-shaped case produced from 1994 to 2004, and made available in all gold materials and in platinum. These also feature matching gold Breguet numerals.

A tonneau-shaped watch that takes inspiration from a Chronometro Gondolo 1925 model. Made in platinum and rose gold, it features a beautiful example of Art Deco design, with its guilloche dial, oval shaped center dial, and Dauphine style numerals. This model was produced from 2007 to 2010.

A modern Patek Philippe Gondolo, this model was introduced in 2007. It features a stepped rectangular case, and remarkably smooth dials. Earlier models came with Breguet numerals, while the updated versions in 2015 came with sunburst dials in blue and silvered opaline, and simpler dart indices that lend a contemporary feel.

With its stepped case and sunburst dial, the 5200 resembles the ref 5124, this time with the addition of an 8-Days manually wound movement with a day and date indicator.

Inspired by the 1921 Chronometro Gondolo tonneau-shaped model, this modern interpretation focuses on luxury and aesthetics, with a rose gold or white gold case set with 480 diamonds, and a hand-guilloched gold dial set with 367 diamonds.

Inspired by the 1923 ref 176 209, these come in squarish cushion-shaped cases. The 7041 features a classic Art Deco aesthetic with its slim Roman numerals, while the 7042 is fully-set with baguette and brilliant diamonds from the bezel to the dial, while the bracelet is set completely by Akoya pearls.

The Gondolo Serata features a distinct sinewy rectangular shape. The name “Serata” which means “Evening” in Italian, imparts that it is a ladies’ evening watch. This model comes with a gem-set case and bezel, a guilloche mother of pearl dial, and a choice between a white gold or satin bracelet.

As is the case with most luxury watch brands, Patek Philippe uses a reference or model number to properly document their catalog and sale.

A Patek Philippe reference number goes by alphanumeric characters as follows xxxx/xxxxX-xxx, but Patek collectors commonly use just the first four digits to refer to a particular model.

Next five digits / letter – The first four digits are usually followed by a backslash, then a set of alphanumeric codes. These denote details of the case, bracelet, or dial, and work as follows:

Following these digits are letters that indicate the material used for the watch case:

The model number ends with a three-digit number after the hyphen. These are used to indicate a version of the dial within a reference, as Patek Philippe often manufactures several different dial versions for the same model. ”001” refers to the first dial version, followed by ”010”, ”011”, and ”012” for next three iterations, and so on.

WHAT IS A PATEK PHILIPPE GONDOLO?

The Patek Philippe Gondolo is a collection of dress watches that come in “form” cases – tonneau, barrel, cushion, and rectangular shapes. Laced with Art Deco design cues, they are modern interpretations of Patek Philippe watches made in the early 20th Century.

WHY IS THE PATEK PHILIPPE GONDOLO SO EXPENSIVE?

Patek Philippe watches also maintain an air of exclusivity that other brands find difficult to maintain. Patek only produces an estimated 50,000 watches a year – a very low number considering that other Swiss watch brands release nearly a million watches annually.

With an unmatched reputation for quality and excellence, plus the combination of limited inventory and steady demand, Patek Philippe watches command a higher price tag.

DOES THE PATEK PHILIPPE GONDOLO HOLD ITS VALUE?

Patek Philippe watches are known to hold their value significantly. With new contemporary designs, as well as gem-set options that add significant value to the timepieces, the Patek Philippe Gondolo continues to enjoy steady demand especially among Patek Philippe enthusiasts.