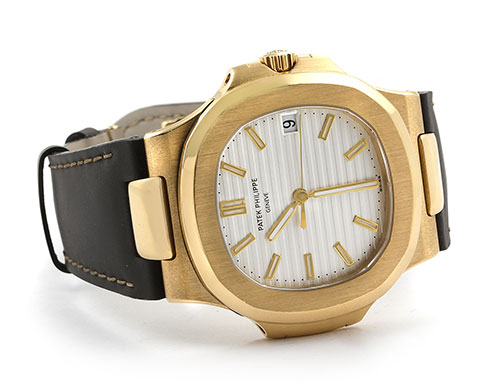 The Patek Philippe Nautilus was introduced in 1976, at the vanguard of the steel luxury sports watch revolution. Created by renowned designer Gerald Genta, it broke the prevailing watch codes of the time with a porthole-inspired case, grooved dial, and a price point on par with gold watches. Despite being an anomaly in Patek Philippe's stable of elegant dress watches, the Nautilus became a hit, and is now considered its most coveted model. The Nautilus has evolved into an entire collection, with various complications and a wider range of metals and colors to choose from. Explore our selection of Patek Philippe Nautilus watches for men and women at SwissWatchExpo.com.

The Patek Philippe Nautilus has epitomized the luxury steel sports watch since 1976. Created by Gerald Genta, the vanguard of the luxury sports watch genre, it has gone from an outlier among Patek’s overwhelmingly elegant catalog, to its most coveted model.

Explore our selection of Patek Philippe Nautilus watches at SwissWatchExpo.com.

A BRIEF HISTORY OF THE PATEK PHILIPPE NAUTILUS

Four years after, in 1976, Genta had a stroke of genius while attending the Basel Fair. Sitting across Patek Philippe executives, he began sketching out a rough design to present to them. Knowing that the Stern family, owners of Patek Philippe, are sailing enthusiasts, he took inspiration from transatlantic liners and their porthole.

This resulted in the octagonal case of the Nautilus. He also gave it “ears” on each side, reminiscent of oversized hinges seen on watertight windows. He added a blue-black dial with strongly embossed horizontal lines, baton hour markers, and a date window at 3 o’clock. A fully integrated bracelet with a folding clasp completed the distinct identity of the watch.

The first Nautilus ref 3700/1 was finally introduced in 1976, and was later named “Jumbo” for its 42mm case, which was considered large at the time. This was followed by a smaller 37.5mm ladies version in 1980.

In the 1980s, Patek also began creating yellow gold and two-tone versions of the Nautilus, followed by its first white gold model, the ref 3711/1G in 2004.

Thirty years after the creation of Gerald Genta’s design, Patek Philippe introduced a revamped model – the ref 5711/1A. The modernized take on the original 3700/1 now comes in a 43mm case, a central seconds hand, and the Patek Caliber 324 SC.

The redesign also introduced a new three-part case, which integrated a sapphire crystal to display the movement. The “ears” were given a more pronounced curve, the blue color of the dial was accentuated, and the “Patek Philippe” name was written in new font. The bracelet was also equipped with a double folding clasp for more comfortable wear.

The modernized yet versatile look would sweep the watch industry, becoming in such high demand that it could take up to 10 years to acquire it.

Following this update, Patek Philippe introduced novelties to the Nautilus line as follows:


The Patek Philippe Nautilus, the ref 5711 in particular, remains one of the most prestigious and coveted sports watches on the market.

ABOUT THE PATEK PHILIPPE NAUTILUS COLLECTION

The classic three-hand design, with a horizontal grooved dial, baton hour markers, and date aperture at 3 o’clock. The most popular edition of this collection is the blue dial 5711/1A, which has been discontinued in early 2021. It was replaced with an olive-green dial version. It is also offered in a full rose gold case and a baguette diamond dial version.

Patek Philippe reference numbers are used to properly document the manufacture and sale of their models. These are often used to identify a particular watch without having to write the entire model name.

The complete format of a Patek Philippe reference number is xxxx/xxxxX-xxx, but avid collectors commonly use just the first four digits in referring to a particular model.

Next five digits / letter – The first four digits are followed by a backslash, then a set of alphanumeric codes. These indicate details of the case, bracelet, or dial as follows:

Following these digits are letters that indicate the metal used for the watch case:

The reference number ends with a three-digit number after a hyphen. These refer to a version of the dial within the model or reference. Patek Philippe creates different dial versions for the same model which makes this necessary. They use ”001” for the first dial version, then ”010”, ”011”, and ”012” for next three versions, and so on.

The Patek Philippe Nautilus 5711/1A debuted in 2006 to celebrate the 30th anniversary of the Nautilus. The grooved black-blue dial version has become the most wanted luxury sports watch to date, with an average waiting time of 10 years at authorized dealers. It is especially loved for its versatility. It is also historically significant because it is a modernized version of the very first Nautilus, the 3700/1 from 1976.

As the most prestigious watch brand in the world, Patek Philippe watches in general hold their value well. The Patek Philippe name is forever linked with sophisticated design and exceptional quality and is also universally recognized as a harbinger of taste. Aside from this reputation, Patek Philippe only produces around 50,000 timepieces a year, which makes for a limited inventory. These factors give Patek Philippe a firm grip on the value of their watches.