The Rolex Oyster Perpetual Date is the smaller version of the Rolex Datejust, with a case size of 34mm. It possesses the same classic features as its larger counterpart – with an Oyster case, self-winding movement, and date aperture at 3 o’clock, in a size that suits smaller wrists. It is available in stainless steel and Rolesor finishes, and with an excellent array of dial colors to choose from. Find yours today from collection of authentic, pre-owned Rolex Date watches for men and women at SwissWatchExpo. 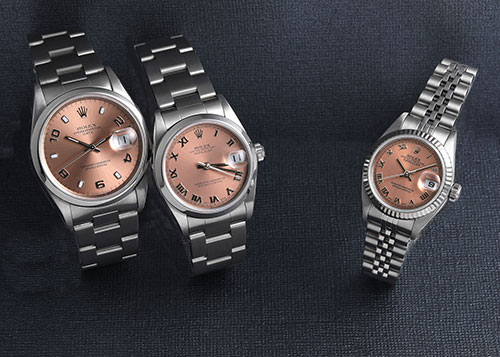 Introduced in the 1950s, the Rolex Oyster Perpetual Date remains a staple in the Rolex catalog. With its timeless design, it shares key similarities with the Rolex Datejust – such as the Oyster case, date window with Cyclops lens, and automatic mechanical movement – but with a smaller 34mm case. Its modest size makes it suitable for men and women alike.

Throughout its history, the Rolex Date has been crafted in yellow gold and two tone finishes, but in recent years, Rolex has made these models exclusively in stainless steel. There are also a variety of bezel options, bracelet choices, and dial designs in the range, all within the sporty-elegant aesthetic of the Rolex Date.

Whether vintage or modern, the Rolex Date offers everything you need in a Rolex at a friendly price point – no wonder it’s popular as a first foray into the world of Rolex watches, and a perfect daily accessory.

A BRIEF HISTORY OF THE ROLEX OYSTER PERPETUAL DATE

The Rolex Oyster Perpetual Date was introduced in the mid-1950s, almost a decade after the Rolex Datejust made its debut. Measuring 34mm, the Rolex Date is only slightly smaller than the traditional 36mm Datejust, making it ideal as a unisex watch.

First and second generation models of the Rolex Date (ref 65xx and 15xx) were crafted in stainless steel (with engine-turned and fluted bezels) and in solid gold. These early versions were powered by the Caliber 1030, and in the 1960s the Caliber 1565 or 1575. The automatic movements did not yet have the quickset date function, so the hour and minute hands had to be moved around the dial if the wearer wanted to change the date.

By the 1980s, the quickset date function was finally introduced to the Rolex Date collection, thanks to the Caliber 3035. This meant that wearers could easily change the date without having to manipulate the center hands.

Today’s versions of the Rolex Date (now called Rolex Oyster Perpetual Date 34) are powered by the brand’s workhorse automatic movement, the Caliber 3135. Considered a base movement, the 3135 is widely used in Rolex’s catalog, including the Submariner and Datejust.

The Rolex Oyster Perpetual Date offers a versatile, sporty-elegant design that’s great for everyday wear; at the same time, there is a lot of variety available in the range, from bezel styles to dial colors and hour marker designs. It’s a great way to wear the Rolex name on your wrist without breaking the bank.

With its modest size and sporty-elegant design, the Rolex Oyster Perpetual Date has been a popular entry point to the Rolex brand. Vintage and modern models alike are available in the pre-owned market and continue to be a great investment. Here are key characteristics of Rolex Date models.

Four-digit References (1950s – 1970s)
Reference numbers: 65xx and 15xx
Early Rolex Date models (ref 65xx) measured 34mm and were crafted in stainless steel, either with a steel bezel or a white gold fluted bezel, and in solid gold. They were equipped with the automatic Caliber 1035 – as these were not yet quickset date calibers, the date can’t be set independently from the hour and minute hands.

In 1954, Rolex introduced the Cyclops lens. Placed on top of the crystal at 3 o’clock, it was meant to magnify the date.

In the 1960s, the ref 15xx were introduced. Rolex began making the Oyster Perpetual Date in two tone finishes aside from gold and stainless steel. They also introduced ladies models in 26mm cases.

It was also in the mid-1960s that Rolex switched from radium luminescence to tritium, because of the former’s toxic effects.

Five-digit References (1980s)
Reference numbers: 150xx and 152xx
By the 1980s, Rolex introduced the first quickset date feature thanks to the Caliber 3035 (ref 150xx). This meant that the date could now be set independently from the hour and minute hands.

Rolex continued to produce the Date in several metals, and we also see the engine-turned bezel make an appearance during this era.

In 1988, Rolex upgraded the movement to Caliber 3135 (ref 152xx), their new date self-winding movement. This movement became a cornerstone of Rolex watches and made its way to more Rolex watches than any other movement.

This generation saw the redesign of the case, which was made broader than previous versions. Bracelets were also equipped with solid end-links and center links, plus an improved clasp.

For its luminescence, Rolex switched to SuperLuminova in the early 2000s and then to longer-lasting Chromalight in the late 2000s.

With its modest size and sporty-elegant design, the Rolex Oyster Perpetual Date is ideal for men and women. Here are answers to the most frequently asked questions about the Rolex Date.

WHAT IS A ROLEX OYSTER PERPETUAL DATE WATCH?

Introduced in the mid-1950s, the Rolex Oyster Perpetual Date is the smaller version of the Rolex Datejust. Sized at 34mm, it comes with an Oyster case and date window with Cyclops lens at 3 o’clock.

Modern models are available exclusively in stainless steel, but vintage models can be had in 14k and 18k yellow gold, as well as Rolesor finish.

Rolex Date watches are water resistant to 100 meters. Thanks to its Oyster case, fluted caseback, and Twinlock crown it is hermetically sealed, protecting the movement from moisture, dust, and impact. Steel models are also made of corrosion-resistant 904L steel.

With this level of water resistance, it can be used for daily wear, and with light water exposure, such as handwashing.

HOW OFTEN SHOULD A ROLEX OYSTER PERPETUAL DATE BE SERVICED?

Rolex generally recommends a service every 3-5 years. Most vintage timepieces however, tend to be fragile, so if it’s a vintage watch you’re wearing it’s advisable to have it checked every 2 years.

One must also remember that a watch’s water resistance and accuracy can be reduced with wear and tear. Depending on how it’s stored and used, your watch may need a service before this prescribed period. Read on for Signs It’s Time for Watch Maintenance.