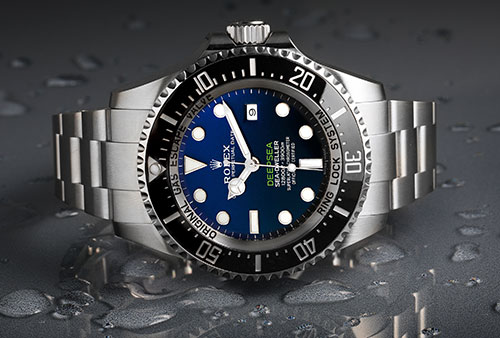 The Rolex Sea-Dweller embodies the brand’s conquest of the deep. The ultra-resistant watch is the loyal companion of saturation divers for their successful exploration of the seas.

As scuba diving and sea exploration gained popularity in the 1960s, the need for a timepiece that can handle further depths and longer saturation times arose. The unique conditions of saturation diving forced helium molecules past the seals of divers’ watches, causing the crystals to pop. To solve this problem, Rolex designed the Sea-Dweller with a helium gas escape valve, which allows helium molecules to safely exit the watch. With its waterproof capabilities, robust body, and classic but highly legible design, the Sea-Dweller became the choice watch of saturation divers and watch collectors alike.

Explore our wide selection of Rolex Sea-Dweller watches at SwissWatchExpo.com.

A BRIEF HISTORY OF THE ROLEX SEA-DWELLER COLLECTION

The story of the Rolex Sea-Dweller is closely linked to the development of the dive watch itself.

Rolex had previously proven its leadership in the creation of waterproof watches with the Oyster (1926) and the Rolex Submariner (1954). In the 1960s, as astronauts explored the possibility of life above the planet, intrepid divers explored the possibility of surviving underwater for days at a time. This brought about the need for watches with greater water resistance.

The current Submariner at the time, the ref 5513, was rated to 660 feet or 200 meters. Rolex aimed for the ambitious goal of tripling this depth rating.

Underwater exploration also posed another challenge for divers. Those who participated in expeditions noticed a strange phenomenon that occurred with their watches - the watch’s crystal would often pop out in the decompression chamber after a dive.

Saturation diving requires a mix of helium in the breathing gas, and helium particles accumulate within the case of the watch during sustained exposure. This is what caused the plexiglass crystal to blow off during decompression. Rolex developed prototype watches to try to address this problem, and they were often named "Sea-Dweller" watches, given their multiple day stays underwater.

Rolex carried out experiments with COMEX, a French company specializing in engineering and deep diving operations. This led to the invention of a feature that would allow helium particles to escape through a controlled mechanism, thus solving the plexiglass problem. It was called the helium escape valve.

The valve was first retrofitted on the Submariner ref 5514 watches especially made for COMEX, but Rolex had later on decided to make a completely new line of watches built especially for deep-sea exploration. Thus, the Rolex Sea-Dweller was born.

The Rolex Sea-Dweller was first released in 1967 with the ref 1665 – the world’s first watch to feature the helium escape valve. The design of the Sea-Dweller is very similar to the Submariner, except that it had a slightly thicker case (to accommodate the higher depth rating) and did not have the Cyclops lens over the date, because it might be blown off due to underwater pressure.

In 1978, Rolex released the fourth generation of the Sea-Dweller with the ref 16660, which is what many consider to be the archetype of the modern Sea-Dweller. It introduced the sapphire crystal and was among the first Rolex watches to be equipped with the scratch-proof glass. It also had a bigger case, allowing for an increased water resistance of 4,000 feet /1,220 meters – double the limit of its predecessors.

In the late 1980s, Rolex introduced the ref 16600, which had all the characteristics of the previous version, except it switched from the use of tritium for its luminous material, to Luminova, and then Super-Luminova. This reference was discontinued after 20 years in the catalog, making it the longest running Sea-Dweller reference.

In 2008, Rolex took the Sea-Dweller to another level with the Sea-Dweller Deepsea, a sub-collection of watches with an impressive 12,800 feet / 3,990 meter depth rating. The two-decade hiatus led to several technical feats: a 55mm thick sapphire crystal to support from underwater pressure, an innovative Ringlock system that enables the watch to have a manageable thickness of 18mm, plus Rolex’s patented Cerachrom bezel and Chromalight luminescence.

A special edition was unveiled in 2014 to commemorate James Cameron's 2012 expedition into the Mariana Trench. Rolex had sponsored the expedition, dubbed Deepsea Challenge, where James piloted the vessel himself; and recorded the experience to aid scientific exploration. The Rolex Deepsea D-Blue was given a unique gradient dial as a homage to the successful event, where it mimics the way light changes as one dives deeper into the ocean.

After a five-year absence, the Rolex Sea-Dweller returned in 2014 with the reference 116600, which featured a bezel upgrade from aluminum to Cerachrom ceramic, as well as a Maxi Dial with bigger hands and markers – a key characteristic of Rolex sport watches from 2000 onwards. This reference was shortlived, as in 2017, Rolex would release a new version in time for the Sea-Dweller’s 50th anniversary.

The new reference 126600 featured a couple of firsts for the Sea-Dweller line, most notably its 43mm case which differentiates it even more from the Submariner; and the appearance of the Cyclops lens over the date. It also features a single red line of text with the Sea-Dweller name, a homage to the original watch from 1967.

Two years after, Rolex introduced the first ever Rolesor Sea-Dweller, featuring a combination of stainless steel and 18k yellow gold.

In its 50-year history, the Rolex Sea-Dweller has been proven to be not just a reliable tool watch, but one that embodies both innovation and heritage.

EVOLUTION OF THE ROLEX SEA-DWELLER

As with many of Rolex’s famed models, the brand has maintained the Sea-Dweller’s fundamental design over the decades, while continuously improving on its technology and details. Here are the distinct generations of the Rolex Sea-Dweller throughout its history, and their important design evolutions.

The very first models of the Sea-Dweller were characterized by a single red line of Sea-Dweller text, and an additional Submariner name written in white. These were more of prototypes, as they were never made commercially available. Only 12 of these are known to exist, and interestingly, 7 of these do not have the helium escape valve.

This was the very first production of the Rolex Sea-Dweller made available to the public. The nickname refers to the two red lines of text on the dial, which separate it from the previous generation of prototypes. Four variations of the dial are known (Mark I to Mark IV) based on the different permutations of the red writing. It was also equipped with the helium escape valve, located on the left case band.

The name for this generation again comes from the dial, with the previous red text now printed in white. With five variations of text (Mark 0 – Mark IV) these dials also lacked the Submariner writing entirely. This is also notably the last generation of Sea-Dwellers to use a plexiglass crystal.

This is considered the archetype of the modern Sea-Dweller. It was the first to feature a sapphire crystal, and its thicker case also allowed an increased water resistance of 4,000 feet / 1,220 meters, double that of the previous generations.

Another notable change was the move from a bidirectional bezel to a unidirectional one, ensuring that an accidental bump of the bezel would cause the diver to surface earlier than planned (and not beyond the capacity of their tank).

This generation is virtually identical to the Triple Six, but over its long production period, the luminescent material evolved from tritium, to Luminova, and then Super-Luminova. One can tell which lume is used by looking at the text at 6 o’clock - T Swiss T<25 indicates Tritium, Swiss indicates Luminova, and Swiss Made indicates Super-Luminova.

In 2008, a sub-collection of watches was introduced under the Sea-Dweller line. Called the Deepsea, these watches boast a water resistance to an impressive 12,800 feet / 3,990 meters (triple that of the Sea-Dweller). It featured a host of technological feats, most notably the 5mm-thick sapphire crystal to support the underwater pressure; and the innovative case architecture called the Ringlock system, which keeps the watch's thickness below 18mm. Composed of a compression ring located between the dial and the crystal, it allows the watch to withstand water pressure equivalent to four tons.

This is a special edition of the Deepsea made to commemorate the Deepsea Challenge. Sponsored by Rolex (along with other companies), this expedition allowed director James Cameron to explore the Mariana Trench, the deepest oceanic trench on Earth. As a homage to the successful event, the D-Blue features a gradient blue-to-black dial which mimics the color of the sea as one travels deeper.

This generation of the Rolex Sea-Dweller received a few upgrades: a Cerachrom ceramic bezel, a Maxi Dial with large hands and indexes, a Glidelock clasp, and Chromalight luminescence.

Launched on the 50th anniversary of the Sea-Dweller, this model presented two firsts in the history of the collection: the first time that its case measures 43mm, and the first appearance of a Cyclops lens over the date. Despite that, it also features a nod to the first prototype Sea-Dwellers with the single red line of text on its dial.

The D-Blue was given a new movement and an improved bracelet. Featuring both the Fliplock wetsuit extension and the Glidelock extension system, this updated bracelet features wider center links and an overall wider presence on the wrist.

This model presents the first time that the Sea-Dweller line has offered a Rolesor model, or a two-tone combination of stainless steel and 18k yellow gold. Its features are similar to the 126600, but the addition of yellow gold accents provide a more luxurious feel.

The table below shows the list of Rolex Sea-Dweller and Sea-Dweller Deepsea references through the years, from older 4 and 5-digit references, to the modern 6-digit models.

COMMON QUESTIONS ABOUT THE ROLEX SEA-DWELLER

WHAT IS A ROLEX SEA-DWELLER?

The Rolex Sea-Dweller is a collection of ultra-resistant watches designed for saturation diving. It was created by Rolex in 1967 to meet the new challenges of deep-sea exploration. The unique conditions of saturation diving caused the crystals of watches to pop, due to the tiny helium molecules that would get trapped inside the timepiece. To solve this problem, the Sea-Dweller was equipped with a helium escape valve, which allowed trapped helium molecules to safely discharge from the watch.

HOW WILL I KNOW IF MY ROLEX SEA-DWELLER IS GENUINE?

Rolex watches are made with the finest materials and with exacting standards, to guarantee both its performance and aesthetics. If you see any sign of imperfection on the watch, such as unfinished or uneven surfaces, wrong engravings and markings, or misspelled or blurred text, it is likely a counterfeit.

Due to the Rolex Sea-Dweller’s long history, what to look for when authenticating the watch will differ from one reference to the next. We always advise clients to do research beforehand, so you can check if the details of the watch are aligned with the model’s supposed features.

One of the best ways to avoid counterfeit watches is to “buy the seller”. Purchase only from a reputable and trusted dealer, preferably one who can provide a guarantee of authenticity on the watch.

The Rolex Sea-Dweller and Rolex Submariner are both dive watches, but they were built for specific purposes. The Submariner was designed to be versatile enough to be paired with everything from jeans to dinner jackets. The Sea-Dweller, meanwhile, was created specifically for deep-sea diving. Its greater water resistance gives it a beefier look, which is better suited for casual situations, or for people with bigger wrists. Neither watch is better than the other, as it all depends on the wearer’s needs.