The Tudor Heritage Chrono takes design cues from the brand’s chronographs from the 1970s, particularly the “Monte Carlo”, whose dial resembles the famous roulette wheels of Monaco. Reintroduced in 2013, the collection has been meticulously redesigned to echo, with a fresh and modern spin, the exquisite details of the coveted originals. The current Heritage Chrono range comes in three designs – two grey scale colors, and a blue and orange colorway – underlining their vintage roots. Explore our collection of Tudor Heritage Chrono watches at SwissWatchExpo.com. 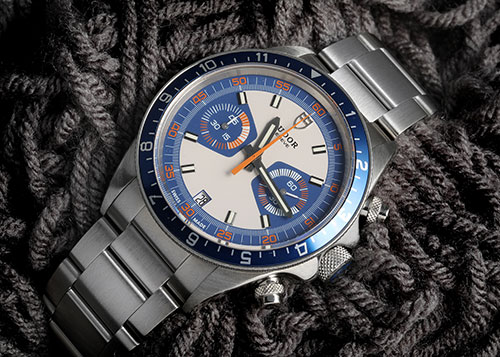 The Tudor Heritage Chrono is historical yet thoroughly modern. Inspired by the first chronographs of the brand from the 1970s, it takes the vintage aesthetic and colorful dials of the originals, and updates it with modern technical features, a contemporary design, and 150-meter water resistance. All these ensure all-purpose functionality with groovy looks to boot.

Introduced in 2010, the Tudor Heritage Chrono is part of the highly successful series of throwback designs launched by the brand, which includes the Heritage Ranger and the Heritage Black Bay. The Heritage Chrono draws its looks mostly from the ref 7031 and the ref 7169, a racing chronograph whose funky, roulette-wheel inspired dial gave rise to the nickname “Monte Carlo”.

Its highly distinctive vintage aesthetic, coupled with modern elements like screwed down pushers and automatic chronograph movements, ensure reliable performance on and off the track.

Explore our selection of Tudor Heritage Chrono watches at SwissWatchExpo.com.

A BRIEF HISTORY OF THE TUDOR HERITAGE CHRONO COLLECTION

If there is any brand that has capitalized well on the vintage watch trend, it’s Tudor. Since their rebranding in the 2010s, Tudor has released one successful throwback watch after another starting with the Heritage Chrono, followed by the Heritage Black Bay, Heritage Ranger, and Heritage Advisor.

The Tudor Oysterdate 7031/0 and 7032/0 were introduced in 1970 as the first chronographs of the brand. What certainly stands out from these models are the dynamically-designed dials. While done with a grey center and black bi-compax layout, the trapezoidal sub-dials, pentagonal hour markers, orange indices, and orange seconds hand gave these designs a distinct identity.

In 1971, the 71XX series of Tudor chronographs were released. Here we see updated movements and the evolution of the dial and bezels.

Most notably, this range also introduced a new color scheme in addition to the grey and black of the previous generation – a stunning blue bi-compax dial with orange accents. With its striking resemblance to the roulette wheel in casinos, collectors gave this model the nickname “Monte Carlo”.

The second generation of Tudor chronographs remained in the catalog until 1977 but remained sought-after among collectors.

Fast forward to the late 2000s, Tudor underwent a rebranding and reinvented itself as a luxury watch brand. With the objective of distinguishing itself as an independent company, and a complement to sister brand Rolex, Tudor dug deep into its archives for inspiration. The result was a catalog split between contemporary designs and “Heritage” models. The Tudor Heritage Chrono was the first of the latter.

The Heritage Chrono was first introduced in Black and Grey versions. A third one followed in 2013 with the “MonteCarlo” look and striking blue and orange colorway. Modern features such as knurled pattern crowns, screw-down pushers, and automatic chronograph movements signal that these are thoroughly modern versions.

With the Tudor Heritage Chrono, the brand successfully brought back the vintage flair of the 1970s while offering modern mechanics, dimensions, and craftsmanship.

ABOUT THE TUDOR HERITAGE CHRONO COLLECTION

The Tudor Heritage Chrono is a homage to the early Oysterdate chronographs of the brand from the 1970s. Those vintage stopwatches had funky and multi-color dials. The second generation of these watches had dials that followed the pattern of roulette wheels, earning them the nickname “Monte Carlo”.

The Tudor Heritage Chrono’s design is a recreation of the old dials with a contemporary spin.

Each of the Tudor Heritage Chrono models come in a 42mm, 13mm tall stainless steel case water resistant to 150m (500 feet). The cases are satin-brushed on the surface and polished on the lugs and edges. On the side are screw-down pushers and a screw-down crown. They are paired with either a three-piece steel bracelet or a fabric strap to match the dial.

There are currently three colorways available in the Tudor Heritage Chrono line:

Tudor Heritage Chrono Gray and Black – features a grey dial with pentagonal hour markers, orange indices and an orange seconds hand. It has black subdials showing a 45-minute totalizer at 9 o’clock, and a small seconds hand at 3 o’clock. This comes with a choice between a steel bracelet or a black fabric strap with orange and grey stripes.

Tudor Heritage Chrono Black and Grey – features a black dial with pentagonal hour markers, orange indices and an orange seconds hand. It reverses the colorway of the grey dial version, with grey subdials that show a 45-minute totalizer at 9 o’clock, and a small seconds hand at 3 o’clock. This comes with a choice between a steel bracelet or a black fabric strap with orange and grey stripes.

Tudor Heritage Chrono Blue – features an opaline dial with blue subdials showing a 45-minute totalizer at 9 o’clock and a small seconds hand at 3 o’clock. Instead of pentagonal hour markers, this edition has elegant, rectangular markers. Apart from the orange indices and seconds hand, there are also orange details on the subdials. A rotatable bezel with a blue anodized aluminum insert complements the dial. This comes with a choice between a steel bracelet or a blue fabric strap with orange and grey stripes.

Tudor assigns reference numbers to its models to properly document the sale and manufacture of their timepieces. Modern Tudor watches have both their reference and serial numbers located on the undersides of the lugs.

Below are the reference numbers for the Tudor Heritage Chrono collection:

WHAT IS A TUDOR HERITAGE CHRONO WATCH?

The Tudor Heritage Chrono is a watch inspired by emblematic vintage chronographs of the brand, particularly the 70XX and 71XX generations and the “Monte Carlo” from the 1970s.

The dynamic “roulette” dial is recreated in a contemporary design with modern technical features.

HOW MANY DESIGNS ARE IN THE HERITAGE CHRONO FAMILY OF WATCHES?

As of 2021, there are six models in the Tudor Pelagos collection, which fall under three colorways. Each colorway is available with a steel bracelet or a leather strap.

IS THE TUDOR HERITAGE CHRONO WATERPROOF?

All Tudor Heritage Chrono watches are water resistant to 150 meters or 500 feet. With this depth-rating, the watch can be worn for light swimming. Always make sure that the crown is screwed down before exposure to water.