Love. Friendship. Fidelity. These three tenets inspired the Cartier Trinity collection. Designed by Louis Cartier in 1924, the Trinity collection has come to symbolize the pillars of life’s most paramount relationships. The first Cartier Trinity piece was conceived as a ring, with three bands in 18k yellow, rose, and white gold intertwined to form one piece. It has grown to include bracelets, necklaces, and eventually, timepieces made exclusively for women. Endowed with a Swiss quartz mechanism, the Cartier Trinity watch beautifully conveys time on guilloche and mother of pearl dials, and are often embellished with diamonds. An elegant, glamorous, and meaningful piece every woman will love. Explore our collection of Cartier Trinity watches for women at SwissWatchExpo.com. 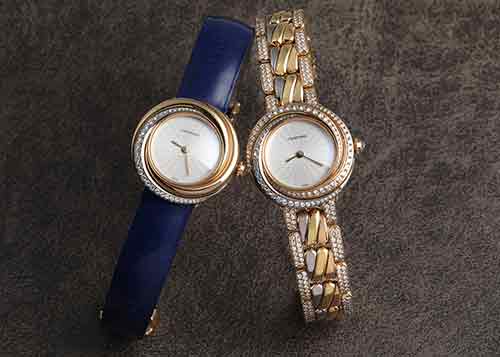 Established in 1847, Cartier was first and foremost a jewelry maker, with an established history of catering to royalty. Dubbed by King Edward VII as “the jeweler of kings, and the king of jewelers” Cartier was an already esteemed jeweler when it ventured into watchmaking in the late 19th century. As such, many of its timepieces are also inspired by their jewelry collections. One of these is the Cartier Trinity watch.

Inspired by a cult classic designed by Louis Cartier in 1924, Cartier Trinity watches are comprised of three bands – one in yellow, white, and rose gold – joined in an embrace to form one circle. These bands represent love, friendship, and fidelity, thus making the Cartier Trinity an enduring symbol of relationships.

A BRIEF HISTORY OF THE CARTIER TRINITY WATCH COLLECTION

The Cartier Trinity watch traces its roots to the Trinity ring designed by Louis Cartier in 1924.

Legend has it that Louis designed the watch for his friend, designer, playwright, poet, and painter Jean Cocteau. The latter had a vivid dream about Saturn’s rings, and asked Louis to turn them into jewelry. Using his friend’s imagination as a starting point, Louis used three rings in different precious metals – yellow, white, and pink gold – to form an interlocking piece. Furthermore, Louis assigned a symbolic meaning to each band: pink gold stands for love, white gold stands for friendship, and yellow gold stands for fidelity. Together, they are supposed to embody the different stages of a relationship.

Aside from its one-of-a-kind concept, what made the Cartier Trinity stand out is its streamlined design. In the 1920s, with Art Deco and Flapper style in full swing, most jewelers including Cartier were focused on making colorful and exotic designs. The pure design of the Cartier Trinity showed Louis Cartier and the Maison’s bravura.

Jean Cocteau would go on to wear a Cartier Trinity ring on his finger for the remainder of his life. The Cartier Trinity ring also became a cult classic, with Old Hollywood icons such as Grace Kelly and Gary Cooper spotted wearing the ring. With its connection to royalty and celebrity, the Cartier Trinity spawned an entire collection, including bracelets, earrings, and eventually a timepiece. It was only formally dubbed the “Trinity” in 1998.

Like the rest of the jewelry collection, Cartier Trinity watches are exclusively designed for women’s wrists, with a 27mm case diameter. While the original design is composed of yellow, rose, and white gold bands intertwined, the collection has also come to include designs in one shade of gold. They are offered with a choice of leather straps or metal bracelets in semi-circular chains, and are all equipped with Swiss quartz movements.

The Cartier Trinity’s position as a jewelry watch is furthered by dials in silvered guilloche, mother of pearl, and occasionally, pavé diamonds. Some models are also embellished with diamonds on the case, either as a single band or covering the entire case, and on the hour markers.

While the Cartier Trinity was designed almost 100 years ago, it looks no less contemporary, making it one of the most classic jewelry and watch designs of all time.

COMMON QUESTIONS ABOUT THE CARTIER TRINITY

WHAT IS A CARTIER TRINITY WATCH?

The main concept of the Cartier Trinity ring is of three bands – one in yellow, rose, and white gold – intertwined in an embrace to form one ring. Each band is said to symbolize love, friendship, and fidelity.

The original ring design has expanded into a whole jewelry collection to include earrings, bracelets, and eventually a timepiece.

The Cartier Trinity watch is powered by a Swiss quartz movement.

DOES THE CARTIER TRINITY WATCH HOLD ITS VALUE?

The Cartier Trinity’s clean, streamlined aesthetic, and storied beginnings makes it one of the Maison’s most popular collections until today. Cartier Trinity pieces are considered staples in women’s jewelry boxes, and remain incredibly in demand, thus making them more likely to hold their value.

IS THE CARTIER TRINITY WATCH WATERPROOF?

That said, they must not be submerged in water, particularly during showers, swimming, and water sports.

One should also note that a watch’s water resistance is not permanent; it can be reduced by the aging of gaskets and through overall wear over the years. Due to the vintage nature of Cartier Trinity watches, it is recommended that they be serviced every two to three years.

IS THE CARTIER TRINITY WATCH DISCONTINUED?

They can still be sourced in the pre-owned market. Explore our collection of Cartier Trinity watches here.