The Patek Philippe Twenty~4 is a collection of watches created exclusively for the active and modern woman. Introduced in 1999, it was composed of diamond-set rectangular watches that can go from casual to business and formal settings. In 2018, Patek added a collection of striking round dress watches with automatic movements to the collection. Whether square or round, and whatever the occasion, the exquisite craftsmanship of Twenty~4 watches add dazzling elegance to any ensemble. Explore our selection of Patek Philippe Twenty~4 watches for women at SwissWatchExpo.com. 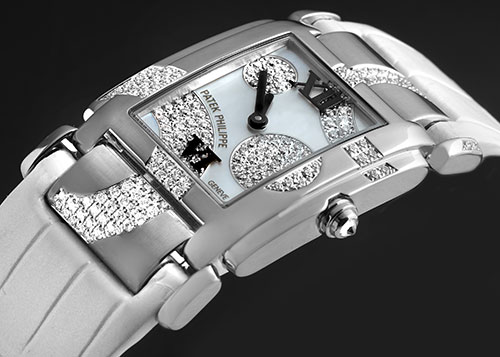 The Patek Philippe Twenty~4 is the Genevan watchmaker’s exclusive line of watches for women. Introduced in 1999, it was made with the active and modern woman in mind.

As women’s lifestyles became increasingly busy and active at the turn of the century, Patek Philippe realized that it was time for watch that they can wear from one occasion to the next – whether at work or during formal events. Patek gave its new watch a combination of rectangular shapes, Art Deco inspiration, a helping of diamonds, and the perfect balance of elegance and comfort, so it can accompany women all day long – hence the name Twenty~4.

Crafted in diamond-set rose gold or stainless steel versions, the Patek Philippe Twenty~4 is the perfect finishing touch to one’s stylish business and casual ensembles, or your most elegant evening wear.

Explore our selection of Patek Philippe Twenty~4 watches at SwissWatchExpo.com.

A BRIEF HISTORY OF THE PATEK PHILIPPE TWENTY~4

Patek Philippe has a long history of creating watches for women. The first watches registered to it sales archives way back in 1839 were sold to a certain Madame Goscinska. Their first wristwatch was also commissioned by Countess Koscewicz of Hungary in 1868. In 1916, Patek also made horological history by making the first complicated wristwatch for women – a five-minute repeater specifically developed for a woman’s wrist.

Since then, the manufacture has developed many ladies watches within its existing collections – from the Calatrava and Golden Ellipse, to the Nautilus and Aquanaut. However, it was only in 1999, before the start of the new millennium, that Patek created their first collection dedicated exclusively for women – the Twenty~4.

Made for the contemporary woman, the Twenty~4 was designed with versatility in mind. Patek wanted to create a watch that could accompany women all day long (hence its name), from work to play.

The Twenty~4 went back to basics with a rectangular construction, inspired by the articulated manchette-style bracelets that were all the rage during the Art Deco period.

True to its day-to-night mantra, the first batch of Twenty~4 watches came in stainless steel, made more elegant with brilliant-cut diamonds on the brancards.

They were also offered in versatile dial colors - Forever Black, Eternal Grey, and Timeless White – each with Roman numerals at 12 and 6 o’clock, with the remaining hours marked by diamonds.

For most of its production span, the Twenty~4 used the Patek Philippe quartz Caliber E15.

The rest of the 2000s were dedicated to experimenting with different materials.

The 2000s: Diamonds, Straps, and Gem-setting

Between 2002 to 2004, Patek Philippe released various versions of the Twenty~4 with full pavé diamond settings, using either brilliant or baguette-cut stones. In 2003, Patek made things more interesting by combining these pavé diamond models with a mechanical movement – a first for the collection.

From 2004 to 2008, the Twenty~4 was all about straps: Patek Philippe introduced four different models offering the classic rectangular case with satin straps. The straps came in the versatile dial colors of the previous models. Inside, these models ran using the E15 quartz movement.

The Twenty~4 was not released in a yellow gold version until 2009, presumably because the metal slowly fell out of style in the modern era. As that changed, and the appeal of gold in its more natural tint emerged, Patek Philippe offered the Twenty~4 in its purest form. The 18k yellow gold versions of the Twenty~4 did without the diamonds on its brancards, allowing the gold construction to shine in all its glory. The diamonds still marked ten of the hours on the dial, adding subtle sparkle.

In the years 2012 to 2015, Patek Philippe showcased their expertise in gemstone design and setting with limited edition pieces of the Twenty~4. Named Lilac, Flowers, Hearts, Foliage, and Dragonflies, each model laden with gem-set décor from all over the case and bracelet.

Its gradual evolution from 1999 to 2017 was met with a remarkable change come 2018. For the first time in Patek Philippe Twenty~4’s history, a round design was introduced to the collection.

The new round Twenty~4 watches didn’t entirely abandon the DNA of the collection, as they features diamonds on the bezel and integrated bracelets as seen on the original Twenty~4’s. Patek Philippe also exchanged the Roman numerals for Arabic ones, and added a date function and central seconds hand which have never been seen in the collection before.

While the round designs received a warm welcome, Patek Philippe didn’t abandon the classic Twenty~4 altogether. In 2020, it received a new lease on life. While the updated rectangular Twenty~4 models had the same dimensions, they were given a slightly more modern appearance by trading the diamond hour markers with luminous baton indices, and the Roman numerals were replaced by an Arabic 12 and 6.

Today, the Patek Philippe Twenty~4 collection gives wearers a choice between these two shapes, and with a choice of stainless steel and rose gold models, plus limited production joallerie models paved with diamonds.

Previous versions of the Twenty~4 remain in demand among collectors, proving that classic style and elegance never loses any of its charm.

ABOUT THE PATEK PHILIPPE TWENTY~4 COLLECTION

Current production of Patek Philippe Twenty~4 watches can be categorized between classic Twenty~4 models in the original rectangular case, and Twenty~4 Automatic models with round cases.

Patek Philippe offers the Twenty~4 models in stainless steel and rose gold. They sport 25.1 x 30 mm rectangular cases, set with 36 diamonds on the right and left brancards. Current models come with gray and blue sunburst dials with luminous trapezoidal indices and Arabic hour markers, but older models have been offered with a choice of black, white, blue, or gray dials with diamond hour markers and VI and XII Roman numerals.

Today’s models come with a polished metal bracelet secured with a fold over clasp bearing the Calatrava cross. This version of the Twenty~4 has been powered by the Caliber E15, a high-precision quartz movement made with the same high standards that Patek gives its mechanical movements.

The latest addition to the Twenty~4 collection are the Automatic models, whose round case and self-winding movements set them apart from the original Twenty~4’s. These feature 36mm cases in stainless steel or rose gold, with 160 diamonds all over the bezel.

There are more dial options offered for this collection, ranging from classic gray and blue, to more eye-catching brown, olive green, and satin-finished dials. Their easily legible dials feature applied Arabic numerals for all hour markers, and a date aperture at 6 o’clock.

They are powered by the Caliber 324 S C self-winding movement which is visible through the sapphire crystal case back.

A haute joallerie version is offered for the Automatic collection – an 18k rose gold watch fully paved with diamonds all over in a “snow” setting.

The Patek Philippe Twenty~4 collection has been offered in the following major references since 1999 for the quartz models, and 2018 for the automatic models.


Like other major Swiss watch brands, Patek Philippe makes use of reference or model numbers to properly document the production and sale of their watches.

They use alpha numeric numbers with the sequence xxxx/xxxxX-xxx, but Patek Philippe collectors often use only the first four digits when referring to a specific model. The reference number can be decoded as follows:

First digit – starts with 3, 4, 5, 6 or 7. Men’s watches start with 3, 5, or 6, while ladies watch models have references that start with 4 and 7. Patek Philippe Twenty~4 reference numbers begin with 49 for the quartz / rectangular models and 73 for the round / automatic models.

Next five digits / letter – the first four digits are followed by a backslash, then a set of alphanumeric digits. These refer to characteristics of the case, bracelet, or dial:

Following the digits are letters that indicate the type of metal used for the watch:

Patek reference numbers end with a three-digit number, which refer to a version of the dial within a reference. Patek Philippe manufactures different dial versions for the same model. To document these, they assign ”001” for the first dial version, followed by ”010”, ”011”, and ”012” for next three versions, and so on.

WHAT IS A PATEK PHILIPPE TWENTY~4?

The Patek Philippe Twenty~4 is the brand’s first exclusively feminine collection. Introduced in 1999, it was made with the modern woman in mind, and was designed to be worn from day to night. It is available in cuff-style versions with a rectangular case, and in round case versions with link bracelets.

IS THE PATEK PHILIPPE TWENTY~4 WATERPROOF?

Patek Philippe Twenty~4 watches are water resistant to 3 bar (or approximately 30 meters / 100 feet). This level of water resistance means it can be safely worn when hand washing. However, they should be removed while showering or while doing water activities like swimming or snorkeling.

WHAT KIND OF MOVEMENT IS USED IN THE PATEK PHILIPPE TWENTY~4?

The movement used in a Patek Philippe Twenty~4 model can easily be distinguished by looking at its shape. Rectangular models with articulated bracelets are powered by the Caliber E15, a high-precision quartz movement; while the round-cased models run using the Caliber 324 SC self-winding movement.