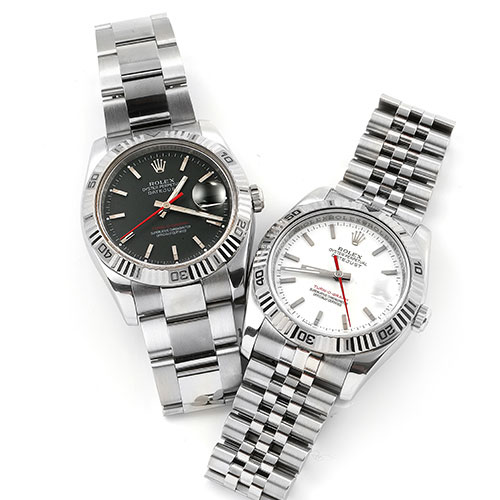 The Rolex Turn-o-Graph was launched in 1953, as the first serially-produced Rolex to have the game-changing rotating bezel. It was later on adopted as the official pilot watch of the U.S. Air Force’s Thunderbird aerobatic squadron, earning it the moniker “Thunderbird”. After being discontinued for years, Rolex re-issued modern versions in the 2000s before marking its end in 2011. With its place in the history of Rolex and today’s modern sports watches, it continues to be sought after among Rolex collectors. Explore our collection of authentic, pre-owned Rolex Turn-o-graph watches for men and women at SwissWatchExpo. 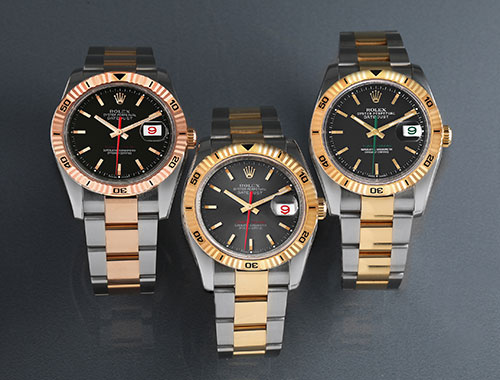 The Rolex Turn-o-Graph is the brand’s pioneer tool watch. Introduced in 1953, it was by all measures revolutionary. It was the first commercially available Rolex watch with a rotatable bezel, and also its first sports watch to be created in Rolesor steel and gold. The highly practical function and sporty-elegant aesthetic created a new genre that is ubiquitous today – the tool watch.

This innovation would pave the way for the brand’s key sports watches, including the Submariner and the GMT-Master, which are considered true icons in the world of watches. Later on, the Rolex Turn-o-Graph would be made part of the Datejust family, becoming a distinct way to wear the ubiquitous collection.

In recent years, the Rolex Turn-o-Graph has achieved cult status among Rolex enthusiasts and vintage watch collectors. With its unique combination of classic dress watch aesthetics and sporty appeal, not to mention its storied past, the once underrated Turn-o-Graph deserves the attention it is getting in this day and age.

Explore our collection of Rolex Turn-o-Graph watches at SwissWatchExpo.com.

A BRIEF HISTORY OF THE ROLEX TURNOGRAPH

The Rolex Turn-o-Graph was introduced in 1953. It began as an experiment, with Rolex seeking to test how the public would respond to their innovation – a rotating timing bezel, which presented a new and easier way of measuring elapsed times.

In Rolex’s advertising, it was marketed “as a reminder of times past, for phone calls, conferences, timing, parking, and countless other ways”.

This unique bezel feature was rolled out with the inaugural reference 6202, which had a thick black rotating bezel. It also shared similarities with the Submariner which was launched a year after – the black dial with a gilt chapter ring, dot hour markers, baton markers at 3, 6, and 9 o’clock, and a triangle at 12 o’clock. Period advertisements sold the Turn-o-Graph as a reliable tool for sports and around the house.

With the launch of the Submariner, the next series of Rolex Turn-o-Graph watches – reference 6309 and 6609 - shifted to a dressier aesthetic. These watches were also equipped with a date window and the collection was placed under the umbrella of the Datejust family.

It was also during this period that Rolex began supplying watches to the United States Airforce’s Thunderbird aerobatic squadron. With this, the Turn-o-Graph earned the nickname “Thunderbird”, after the aircraft used by the squadron with the same name.

The next update came in 1988 which equipped five-digit models with sapphire crystals. Solid gold models were also phased out in favor of steel and two-tone models.

In 2004, to commemorate 50 years since the release of the Turn-o-Graph, Rolex unveiled a new family of models. These came with bezels that merged the functionality of the rotating timing bezel with the fluted bezel identified with the Rolex Datejust, with graduations for every 5 minutes. This generation also introduced rose gold into the collection, with a Rolesor steel and rose gold model.

The Rolex Datejust Turn-o-Graph was discontinued in 2011, but is still in high regard today.

ABOUT THE ROLEX TURNOGRAPH COLLECTION

The distinguishing feature of the Rolex Turn-O-Graph is the rotating timing bezel with 60-minute graduations.

Only the first and last generations of the Rolex Turn-o-Graph have its name printed on the dial, but the single easiest way to identify a Datejust Turn-O-Graph from a standard Datejust is by looking at its bezel.

Here’s how the Rolex Turn-o-Graph evolved over the decades:

The first reference 6202 introduced the rotating bezel calibrated to 60 units. This model was made in stainless steel, with a Bakelite bezel and a glossy black dial with gilt chapter ring.

The second series, reference 6309, introduced an upgraded movement and solid yellow gold editions. This was produced from 1954 to 1959.

1959 saw the birth of the reference 1625, which Rolex would produce until 1977. Two main editions of these were made available – both in steel, but with an option between a white gold bezel or yellow gold bezel and center links.

While the formal name of the collection is the Turn-o-Graph, many also refer to it as the “Thunderbird”. In the late 1950s, Rolex supplied the U.S. Air Force’s Thunderbird aerobatic squadron with Rolex Turn-O-Graphs, as the rotating bezels could be used to navigate flight calculations.

In 1977, Rolex introduced the five-digit references of the Rolex Turn-o-Graph. These were upgraded with the Caliber 3035 and a more scratch resistant sapphire crystal. There were two metal combinations made available – Rolesor yellow gold and steel and white gold versions.

In 2000, Rolex unveiled what would be the final generation of the Datejust Turn-o-graph. Some changes were introduced, most notably the fluted bezel, dynamic red date, red seconds-hand, and red “TURN-O-GRAPH” lettering. They were made available in three metal combinations and were produced until 2011.

Rolex Turnograph models are available with these reference numbers:

COMMON QUESTIONS ABOUT THE ROLEX TURN-O-GRAPH

WHAT IS A ROLEX TURN-O-GRAPH WATCH?

The Turn-o-Graph is one of Rolex’s earliest tool watches, and the model that introduced the rotating timing bezel. Back then, this extra rim was an innovation – a new and simpler way of measuring elapsed time.

This feature would eventually be adapted by Rolex’s most beloved models such as the Submariner and GMT-Master.

The Turn-o-Graph was produced from 1953 until 2011. While it is discontinued, models are still sought-after by collectors and can be found in the secondary market.

IS THE ROLEX TURN-O--GRAPH WATERPROOF?

Rolex Turn-o-graph watches – from the original Turn-o-Graph to the Datejust Turn-o-Graph editions – are water resistant to 100 meters, thanks to their Oyster case, screw down case back, and Oyster crown that secures them together.

With this level of water resistance and considering the vintage nature of the Turn-o-Graph, the wearer can use it for light water exposure, such as handwashing.

HOW OFTEN SHOULD A ROLEX TURN-O-GRAPH BE SERVICED?

In general, Rolex recommends a service every 3-5 years. However, vintage timepieces tend to be fragile by nature, so it's recommended to have any vintage watch looked at every two years.

A watch’s water resistance and accuracy are not permanent and are subject to wear and tear. There are a few signs that your watch needs a service sooner rather than later. Check out Signs It’s Time for Watch Maintenance.