With its square case, the Cartier Tank Obus is one of the most unique iterations of the iconic Tank watch. Introduced in 1923, just a few years after the culmination of the First World War, its design takes inspiration from French artillery, with bullet-shaped lugs connecting its case to its straps. The rest of the watch is distinctly Cartier, with its painted Roman numerals, blued steel hands, and sapphire-finished cabochon. Its one-of-a-kind design, coupled with its limited availability, make it the perfect grail watch for any collector, whether he’s a Cartier devotee or simply a lover of fine watches. Explore our collection of Cartier Tank Obus watches at SwissWatchExpo.com. 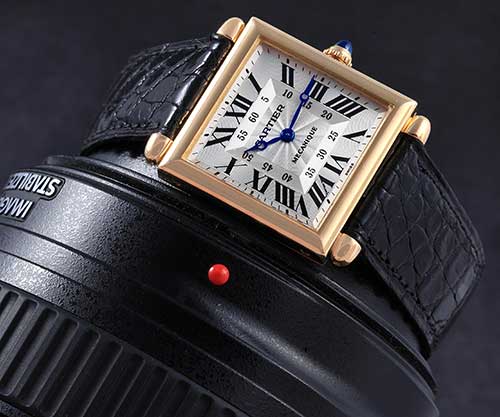 While Cartier began as a purveyor of haute joaillerie, the French maison has a long tradition of creating watches. It all began in 1904 when Louis Cartier designed the very first men’s wristwatch, the Santos, at the request of aviator Alberto Santos-Dumont. The brand continued to make a name for itself with their most famous wristwatch, the Tank. Inspired by World War I combat vehicles, the rectangular piece would endure and be made in multiple forms. One of these is the Tank Obus.

The name Obus is French for “shell” and refers to the bullet-shaped lugs that attach the case to the leather strap. Aside from this design detail, what really sets the Tank Obus apart from the rest of the collection is its square case, unlike the rectangular ones that collectors have come to expect.

The Tank Obus was made in very limited numbers since it was introduced in 1923 and even when it was revived in 1998. For this reason, it is highly-sought after by watch collectors and the Cartier faithful. Find yours from our selection of Cartier Tank Obus watches at SwissWatchExpo.com.

A BRIEF HISTORY OF THE CARTIER TANK OBUS COLLECTION

The Cartier Tank Obus was created in 1923, shortly after the Tank Chinoise was released. Together, these two are the most unlikely looking Cartier Tank watches ever created.

The Tank Chinoise, whose design was inspired by Chinese architecture, featured pillar-like borders as its bezel. Meanwhile, the Tank Obus stayed with the military theme of the original Tank watch. Bullet-like beads affixed the case onto the leather strap, hence the name Obus which is French for “shell”.

These early models were rectangular in shape, measuring 19 x 32 mm. They had the signature Cartier painted Roman numeral markers, and the blued sword-shaped hands that match the sapphire-embedded crown. Most of the models from this era were stamped with “Paris” under the 6 o’clock marker, which suggests that they were sold in Cartier’s flagship boutique at Paris’ Place Vendôme.

Although the Tank Chinoise was always in demand among collectors, the Tank Obus was not as lucky. The artillery-inspired lugs were simply too un-Cartier for discerning collectors. They were produced in very limited quantities through the following decades.

By the 1970s, a more adventurous design of the Tank Obus was introduced, one whose Roman numeral markers were embedded onto the bezel itself. The dial formed a small square in the middle of the wide bezel, surrounded by the signature Cartier railway track.

In 1998, Cartier introduced their Collection Privée Cartier Paris (CPCP) collection – a range of models that revived historical designs of the house, and were equipped with high-horology movements. One of the models chosen for the collection was the Tank Obus.

Under the CPCP collection, the Tank Obus was given an almost perfect square shape, measuring 26.5 x 33.5 mm. They were rendered only in 18k yellow gold, and had timeless silver-toned dials finished with exquisite guilloche patterns, Roman numerals with the secret Cartier signature at 7 o’clock, and blued Breguet-style “observatoire” hour and minute hands. These models also had display case backs showing the manual winding movement marked with Cartier’s interlocking CC pattern. On the leather straps were Cartier-signed ardillon buckles.

While most of the CPCP-era Tank Obus models were made in this timeless design, they also offered versions with double-row diamond bezels, and a limited edition rectangle version in platinum.

All of the CPCP Tank Obus models were equipped with Cartier’s Caliber 430 MC, which is a decorated version of Piaget’s Caliber 430 P. The remake of the Cartier Tank Obus were produced in limited quantities of 100-150 pieces. Its small production run, coupled with its inherently unique design, are the perfect combination for any watch collector, whether he’s a Cartier devotee or simply a watchmaking enthusiast.

WHAT IS A CARTIER TANK OBUS?

The Cartier Tank Obus is a version of the Tank watch introduced in 1923. Following the military-inspired theme of the classic Tank, its design was inspired by French artillery, and so it features bullet-like lugs that attach the case to the leather strap. It is one of the more unique versions of the Tank ever made.

It was revived in 1998 as one of the designs under Collection Privée Cartier Paris and produced in limited quantities of 100-150 per model. This makes it particularly sought-after among vintage watch collectors.

DOES THE CARTIER TANK OBUS HOLD ITS VALUE?

The Cartier Tank Obus is one of the very few square models within the Tank family and Cartier catalog. It was also produced in very limited numbers.

Both its charm and rarity make it particularly coveted by collectors, thus raising its profile in the vintage watch market, and increasing the chances that it will hold its value.

IS THE CARTIER TANK OBUS WATERPROOF?

Cartier Tank Obus watches are water resistant to 30 meters or 100 feet, which protects them from splashes and the rain. Watches with this level of water resistance must not be submerged in water, particularly during swimming and water

One should also note that a watch’s water resistance is not permanent; it can be reduced by the aging of gaskets and overall wear over time. Due to the vintage nature of Tank Obus watches, it is recommended that they be serviced every two to three years.

IS THE CARTIER TANK OBUS DISCONTINUED?

The last version of the Cartier Tank Obus was produced within the Collection Privée Cartier Paris (CPCP) collection, which was discontinued in 2008.