The Omega Speedmaster is one of the most iconic chronographs. Originally created for the race track, fans associate the Speedy with the historic Apollo 11 Mission of 1969, where it became the first watch on the Moon. No other watch has contributed to space exploration much like the Speedmaster. Today, the collection has expanded beyond the MoonWatch, and comes with a vast array of models ranging from Heritage editions to quartz-powered instruments. Explore our wide selection of Omega Speedmaster watches at SwissWatchExpo.com. 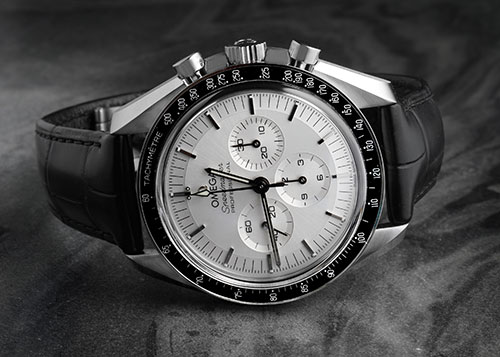 The Omega Speedmaster is the first watch on the moon, and one of the most important chronographs of all time. Originally created as a sports and racing chronograph, it became NASA’s official timekeeper, after besting other brands in tests of endurance in extreme conditions. It accompanied astronauts in the first manned moon landing in 1969 and has been part of every lunar mission since then.

Throughout its history, the Speedmaster has also played a life-saving role in events that tested the limits of human endurance and courage – including pioneer expeditions to the North and South Pole, and the safe return of the Apollo 13 crew.

With its timeless design, proven reliability, and incredible history, the Omega Speedmaster has achieved legendary status in the world of watches. Explore our selection of Omega Speedmaster watches at SwissWatchExpo.com.

A BRIEF HISTORY OF THE OMEGA SPEEDMASTER

The Speedmaster’s history began in 1957, when it was introduced as one of three ‘Professional’ models that would later become classics: the Speedmaster, the Seamaster, and the Railmaster.

The Speedmaster was introduced as a practical chronograph, the Railmaster as an anti-magnetic watch, and the Seamaster as a water-resistant dress watch, all complementing Omega’s position as the Olympic timekeeper.

The earliest Speedmaster model was the CK2915, which already had hallmarks of the model that we see today: the triple register chronograph layout, tachymeter bezel, and the domed Plexiglas crystal. The model had straight lugs and “Broad Arrow” hands that would appear sporadically throughout the Speedmaster’s history. This timepiece also measured 39mm.

Its movement was the Calibre 321, the product of a collaboration between Omega and Lemania, a manufacturer of movements who was Omega’s subsidiary at the time. Calibre 321 would go on to be recognized as one of the best chronograph movements, particularly of the lateral clutch, column-wheel controlled kind.

In 1959, the second Speedmaster was introduced with the CK2998. The case diameter was enlarged to 40mm, the steel bezel was replaced by black aluminum, and the Broad Arrow hands were replaced by Alpha hands.

In 1962 and 1963, Omega introduced the ST 105.002 and ST 105.003 with straight baton hands. In the same year, Omega also launched the 105.012 where we’ll begin to see the emblematic Speedmaster MoonWatch design – a 42mm asymmetrical case, three chronograph registers, and baton hands.

In 1958, NASA pursued the first human spaceflight program, Project Mercury. With the goal of putting man in orbit, and bringing them back safely, it launched six manned spacecrafts between 1961 and 1963. Before it was completed, President John F. Kennedy already expressed his desire to put man on the moon.

In 1963, the US government launched the Apollo program – a set of three-man missions intended to land humans on the Moon and bring them back to Earth safely. As astronauts in these missions were expected to leave the space craft and move about, they needed timepieces that could withstand the rough conditions of space.

As early as 1962, NASA had already been anonymously purchasing timepieces with the intent of finding the best one available for the missions.

In 1964, pre-selected watches were subjected to processes called “Qualification Test Procedures”. Only three out of six chronographs tested survived this preliminary test. These were then subjected to 11 more tests – the most rigorous ones known in watch history.

First Watch on the Moon

On July 20, 1969, the Apollo 11 landed on the moon with astronauts Neil Alden Armstrong, Edwin “Buzz” Aldrin, and Michael Collins on board. Armstrong was the first to step on to the moon’s surface. He had left his watch behind because the electronic timing system on the Lunar Module malfunctioned. He was followed by Buzz Aldrin who was wearing his Omega Speedmaster Professional 105.012 with a Calibre 321 movement. It became the first watch worn on the moon.

To commemorate this historic achievement, the case backs of the Speedmaster Professional were changed. Omega’s Hippocampus insignia was removed, and replaced with the phrases “The first watch worn on the moon” and “Flight qualified by NASA for all manned space missions” engraved on the case back. The Hippocampus was integrated back in 1971, and this design is still being used today on Speedmaster Professional watches.

The Speedmaster remained present in succeeding space missions, accompanying all six lunar landings and every US manned space flight since 1965.

Over the years, Omega would replace the Speedmaster Professional movement with more accurate ones.

It was in 2019 with the Caliber 3861 that the Omega Speedmaster achieved Master Chronometer certification. The Master Chronometer certification is achieved by passing a combination of two testing procedures. First, the movement is tested by the COSC, the body which is responsible for certifying all Swiss-made chronometer movements. Second, it is tested by METAS, which certifies for resistance to magnetic fields. A METAS certification means the watch is capable of resisting magnetic fields of up to 15,000 gauss.

Throughout its history, the Omega Speedmaster collection expanded to include variations of the original Speedmaster. These include automatic models, reduced case sizes, different colors and themes, as well as limited and special editions and tribute models.

It is also customary for Omega to launch commemorative editions of the Speedmaster on key anniversaries of the different NASA space missions. In 2019, for example, Omega celebrated the 50th anniversary of the historic first lunar landing with two Speedmaster Apollo 11 50th Anniversary Limited Editions.

In the same year, Omega also brought back the Caliber 321, the first movement ever used in the Omega Speedmaster in 1957.

In 2021, Omega introduced the Speedmaster Moonwatch Master Chronometer, which marked the most important upgrade to the Speedmaster movement. Equipped with the Calibre 3861, which took 4 years to develop, it has significant improvements in power reserve, chronometer performance, and magnetic resistance.

A new Omega Speedmaster is also in the works, one capable of accompanying man on a mission to Mars by 2030.

ABOUT THE OMEGA SPEEDMASTER COLLECTION

From the original Speedmaster Professional models, the Omega Speedmaster collection has expanded over the years to include sub-collections. Today’s Speedmasters come in many styles and sizes, and can be grouped into the following families:

Like the rest of Omega’s models, every Speedmaster model comes with a unique reference number that offers insight into the model. Omega reference numbers, called product identification codes (PIC for short) consist of 14 digits. One can deduce qualities of the watch, such as the material and movement type, using this unique identifier.

The 14-digit number can be broken down as follows: AAA.BB.CC.DD.EE.FFF

AAA – the first three digits denote the collection or family of watches. Below are the respective numbers for the Speedmaster collections:

BB – The following two digits represent the case and the strap or bracelet material; For example, 10 means both the case and bracelet come in stainless steel.

CC – denotes the case diameter, rounded up to the next digit.

DD – the eighth digit or the first “D” represents the type of caliber or the nature of the movement – for example, whether it is a quartz or mechanical movement.

The fifth digit or the second “D” represents the number of complications on the watch, meaning features beyond the hour, minute, second, and date.

EE – denotes the type of dial. For example, 01 means it has a simple black dial.

COMMON QUESTIONS ABOUT THE OMEGA SPEEDMASTER

Considered the flagship model of Omega, the Speedmaster has a well-balanced design and an illustrious history that gives it enduring popularity. Here are some of the most common questions about the Omega Speedmaster.

WHAT IS AN OMEGA SPEEDMASTER ‘MOONWATCH’?

The Omega Speedmaster is a collection of chronographs, and within the line are MoonWatch Professional watches – descendants of the timepieces that were used for the lunar missions.

The MoonWatch by definition is a hand-wound watch with three chronograph subdials, a Hesalite or plexiglas crystal, and a stainless steel case back; however it has evolved over time to include a sapphire crystal and case back. One can follow the succession of models in the MoonWatch line to identify modern references of the MoonWatch:

WHAT OMEGA SPEEDMASTER REFERENCE WAS WORN ON THE FIRST MOON LANDING?

The first Moon landing took place on July 20, 1969 when the Apollo 11 spacecraft arrived on its surface.

Astronauts Neil Alden Armstrong, Edwin “Buzz” Aldrin, and Michael Collins were all provided the Omega Speedmaster reference 105.012 on board.

Neil Armstrong, the first man to step on the Moon, kept his watch on the Lunar Module.

It was Buzz Aldrin, who followed Armstrong on the Moon’s surface while wearing his Speedmaster, that made it the first watch on the Moon.

DOES THE OMEGA SPEEDMASTER HOLD ITS VALUE?

Because of its classic design, reliable performance, and remarkable history, the Omega Speedmaster has prevailed as one of the most coveted chronographs. With its continuing popularity and huge audience, the Speedmaster will always be in high demand, thus holding its value well.