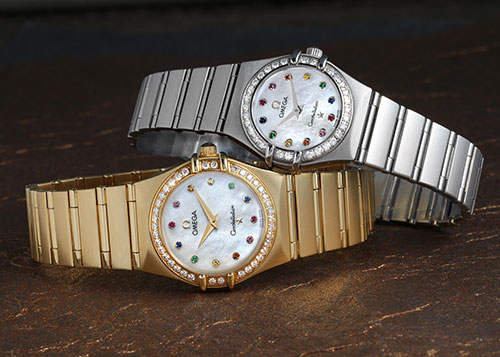 While it has taken many forms since 1952, the Omega Constellation collection has remained steadfast in uniting elegant aesthetic with precision timekeeping. The collection is named after its emblem, a cupola surrounded by eight stars that represent Omega’s greatest chronometric achievements from the mid-20th century.

The Constellation traces its beginnings as a dressy everyday wearer, bridging the gap between Omega’s sport watches and dress models. It was in the 1980s that the Omega Constellation would take the form we recognize today – with half-moon cases, distinct claws at 3 and 9 o’clock, and an integrated bracelet – a dramatic look that would remain for decades to come.

The Globemaster became part of the range in 2015. It revives the iconic mid-century “pie-pan” dial and fluted bezel in a modern design and brings with it a groundbreaking development – the world’s first Master Chronometer certified movement, which is not only extremely accurate, but also resistant to magnetic fields up to 15,000 gauss.

Today, the Omega Constellation collection features a vast range of watches for men and women, with a wide spectrum of materials, dial colors, embellishments, and straps on offer. It has become a favorite among collectors who value both sophistication and performance. Explore our collection of Omega Constellation watches at SwissWatchExpo.com.

A BRIEF HISTORY OF THE OMEGA CONSTELLATION

Introduced in 1952, the Omega Constellation is one of the brand’s oldest collections. It traces its beginnings to the famous era of observatory trials, where Omega established its dominance in watchmaking precision.

This legacy is carried by the Omega Constellation until today, by way of its emblem that shows the Geneva Observatory and eight stars that represent the brand’s greatest chronometric achievements.

The Constellation was once the brand’s flagship, composed of dress pieces that had the dimensional “pie-pan” dials from the ‘50s and ‘60s.

Among the most popular models of these kind were made by watch designer Gerald Genta, who worked with Omega’s supplier during the same period. His Midas touch can be seen in references 168.005 and 168.009, which featured pie-pan dials with ultra-precise and chronometer-rated bumper movements.

Well-proportioned and classic in design, they also feature a screw-down case back with the signature Constellation logo. The raised indices provide better reading of the dial, while the metal and leather straps offer a convenient fit. These pieces would form the hallmarks of the collection down the line: elegance and performance.

Since then, the Constellation range went through many changes. It slowly developed from an elegant dress watch into a dressy sports watch by the early 1980s.

Around the 1980s, the Constellation’s design switched to the Neo-Classical styling popular at the time, giving birth to the Constellation Manhattan model, which remains in production today. Its key characteristics are the half-moons and “claws” on both sides of the case. With this design, Omega left the pie-pan dial and fluted bezel behind.

Fast forward three decades in 2015, Omega dug deep into its archives and launched a historical nod to the dress watches from its past – the Omega Constellation Globemaster. With its classic style, the Globemaster makes for the perfect everyday watch.

Straddling the line between casual and elegant, this watch revives two great design characteristics from the mid-20th century: the pie-pan dial of the 1950s and the fluted bezel of the 1960s. Sized at 39mm for the time and date-only models, and 41mm for the annual calendar, it wears just right on the wrist.

In true Constellation fashion, its case back also includes a Central Observatory medallion.

With the Constellation’s history as a platform for both elegance and precision, the Globemaster was introduced with a groundbreaking movement. It runs on Omega’s most advanced movements yet – the Calibers 8900/8901. These mechanisms were submitted to a new kind of certification called METAS, wherein the organization tests movements that already have a COSC chronometer accreditation.

To acquire a METAS certification, calibers are put through eight tests, aimed to measure their performances in real-world conditions. Regulated to an accuracy of -0 to +5 seconds per day after being exposed to a magnetic field of 15,000 gauss, the Calibers 8900/8901 are highly capable movements.

Since then, newer Omega Constellation models have also been equipped with the latest Co-Axial Master Chronometer calibers, and ceramic bezels have also been introduced to the range. These continuous improvements show Omega’s consistent commitment to technical excellence.

ABOUT THE OMEGA CONSTELLATION COLLECTION

The Omega Constellation collection is formed by two distinct lines of watches: the Constellation and the Globemaster. Both ranges feature elegantly designed watches with high precision calibers.

OMEGA CONSTELLATION
Introduced in 1952, the Omega Constellation began as a collection of dress watches with chronometric movements. It has undergone a number transformations over the decades, evolving from round watches with pie-pan dials and fluted bezels in the 1950s, to ultra-thin quartz-powered models in the 1970s, finally leading to the current design in 1982 – the Constellation Manhattan and its trademark claws.

In 2020, Omega outfitted the latest models with Co-Axial Master Chronometer calibers, following its introduction to the Omega Globemaster range in 2015. Two new sizes also emerged – 39mm and 41mm men’s versions. The latter comes with polished ceramic bezels instead of the steel or precious metals seen in the rest of the collection.

OMEGA GLOBEMASTER
The Omega Constellation Globemaster became part of the collection in 2015. Its design pays homage to vintage watches from the 1950s, featuring a “pie pan” or stepped dial and a fluted bezel.

Alongside the retro-modern look was a groundbreaking development – the Globemaster ushered in the Co-Axial Master Chronometer certified movements for Omega. Approved by the Swiss Federal Institute of Metrology or METAS, it is more demanding than COSC chronometric certification. These movements are regulated to an accuracy of 0 to +5 seconds per day, after being exposed to magnetic fields of 15,000 gauss.

The Globemaster comes in 39mm case sizes for the time-and-date models, and 41mm for the annual calendar models.

Omega uses a 14-digit product identification code (PIC for short) to document the sale and production of their watches.

COMMON QUESTIONS ABOUT THE OMEGA CONSTELLATION

WHAT IS AN OMEGA CONSTELLATION?

The Omega Constellation is a range of watches with classic, casual-to-dress designs, and award-winning precision. The current range is composed of two families of watches – the Constellation and the Globemaster.

The Omega Constellation is characterized by its “half moon” case and claws on the 3 and 9 o’clock position.

Meanwhile, the Omega Globemaster is a cushion-shaped watch that pays homage to mid-century watch design, particularly the “pie-pan” dial and fluted bezel.

Except for the ladies models with quartz movements, the current models are outfitted with the latest Co-Axial Master Chronometer calibers.

HOW CAN I TELL IF MY OMEGA CONSTELLATION IS REAL?

Omega is world-famous for creating highly-functional and complicated watches that don’t sacrifice quality or style. As they are crafted to the highest of standards, any sign of poor quality means your watch is likely a counterfeit.

Some signs to look out for are spelling or engraving mistakes, sub-standard or unfinished parts, and features that do not correspond to the specific model that you are looking at.

It is crucial to do research on your chosen model and reference before buying a watch, as it will help you more easily spot a fake. At SWE, we always tell clients to get their watch from a reputable and trusted dealer, like SwissWatchExpo, who is able to provide a guarantee of authenticity on the timepiece.

HOW OFTEN SHOULD MY OMEGA CONSTELLATION BE SERVICED?

Your watch’s service frequency depends greatly how it is used and stored, and the environment in which it is worn.

Omega recommends that you have its water resistance checked once a year, and have a complete service performed every 5 to 8 years. There are some signs however, that your already needs maintenance. Check out our article on Signs It’s Time for Watch Maintenance.