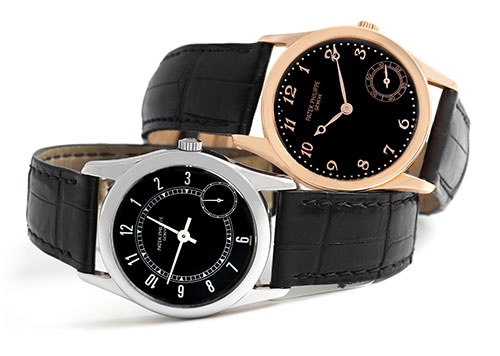 The Patek Philippe Calatrava is recognized as the quintessential round watch. Introduced in 1932, the Calatrava was strongly influenced by the Bauhaus design movement, which focuses on straightforward simplicity. Earlier Calatrava models feature perfectly round cases and minimalist dials, but today’s current designs come alive with diamond bezels, textured dials, moonphase complications, and Breguet numerals - all while maintaining their timeless elegance. Explore our selection of Patek Philippe Calatrava watches for men and women at SwissWatchExpo.com. 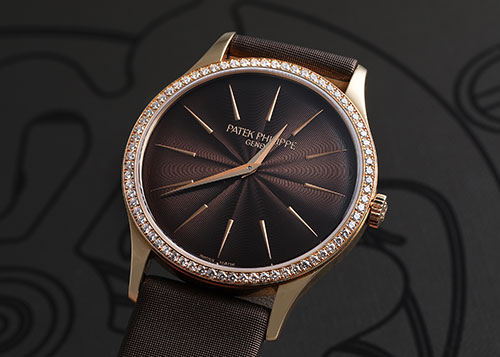 The Patek Philippe Calatrava is the considered the quintessential round watch. First released in 1932, its minimalist design became the flagship of Patek’s modern era and set the Genevan manufacture ahead as a modern thinking company.

When the Calatrava was introduced, the market still abounded with pocket watches and complicated timepieces. As the Great Depression caused sales to lag, Patek responded with the understated Calatrava. Inspired by the “less is more” Bauhaus movement, the watch’s lines were clean and simple, its dial tidy and harmonious. Paired with the prestige of the Patek Philippe brand, its classic elegance inevitably made the Calatrava one of the most celebrated collections in watchmaking.

A BRIEF HISTORY OF THE PATEK PHILIPPE CALATRAVA

The Patek Philippe Calatrava was introduced in 1932, the same year that Charles Henri and Jean Stern acquired Patek Philippe. The family, who owns the Genevan manufacture to this day, owned the dial maker Cadrans Stern Frerès, which supplied Patek and other Swiss manufacturers. They soon acquired Patek, Philippe & Cie (as the company was formally known) to revitalize the business.

The previous three years of the Great Depression had taken its toll on Patek Philippe, as fewer customers had the means to buy their complicated watches. The Stern brothers decided it was time to design a product that would broaden the appeal of the brand beyond high-end watch collectors – one that met increasing appetite for simpler watches, while complementing the high quality of Patek’s complicated timepieces.

The Sterns commissioned English watchmaker David Penney to come up with the watch. Penney was enamored with the Bauhaus style of industrial and interior design, whose mantra “form follows function” favored functional and abstract shapes, and straightforward simplicity. His design became the Reference 96 – a gold watch with a clean ivory dial, applied gold markers, and a tiny subsidiary seconds dial above 6 o’clock. Powering the Reference 96 was a 12-ligne movement from LeCoultre.

They named the new timepiece Calatrava, after the 12th century Order of Calatrava, which protected a castle of the same name in Castile, Spain. In 1887, Patek Philippe had registered the Cross of the Calatrava as their official logo, but had never used it for any of their collections until the Reference 96 was born.

The original Calatrava Reference 96 was produced for over 40 years, with a host of renditions. While keeping the elegantly simple design, it featured various dial aesthetics – from petite seconds, central seconds and no seconds; to varieties of hour markers, from applied baton Breguet, Arabic, and Roman numerals, to scientific “sector” dials.

While the Calatrava was always minimalist and never intended to show technical sleight of hand, the collection has expanded to include more complex models. As early as 1936, Patek introduced a Calatrava with a date and moon phase indicator. In 1953, the first automatic Calatrava was introduced (ref 2526), followed in 1958 with an independently adjustable hour hand.

In 1973, Patek unveiled what modern collectors consider the classic Calatrava: the ref 3520 with a Clous de Paris or hobnail bezel, paired with straight, polished lugs.

In 1989, the Officer’s Style Calatrava was introduced, featuring a hinged dust cover to protect the transparent case back, calling to mind classic pocket watches.

As decades passed, the Calatrava, while originally made for men, also lent itself to styles made for women. In 2006, they introduced the ref 4896, the company’s first extra-thin mechanical watch for women. A blue satin strap and diamond bezel lent feminine elegance to this milestone model.

Today, the Patek Philippe Calatrava has a vast number of references in its line-up, with varying styles that still subscribe to its minimalist philosophy. Considered an icon in all of watchmaking, collectors and casual wearers alike look to the Calatrava for an understated timepiece that makes a magnetic statement.

ABOUT THE PATEK PHILIPPE CALATRAVA COLLECTION

The Patek Philippe Calatrava has long been regarded as the standard bearer of time-only dress watches. Over the years, the manufacture has also expanded the Calatrava line to include various embellishments and modern upgrades, while some have crossed over to the Complications line with the addition of dual time zone and calendar features. Here are the major sub-collections within the Patek Philippe Calatrava catalog:

The original Patek Philippe Calatrava design features a remarkably understated aesthetic – a classic round case; a dial with no seconds or petite seconds, Roman, baton or Breguet hour markers, and a minimalistic time-only philosophy. Classic Calatravas came with polished cases and bezels, and in the 1970s, a "Clous de Paris" hobnail bezel option was introduced.

Traditional Patek Philippe Calatrava models lack the date display, but over time, the company has made several models with the date. For example, references 5227, 5296, and 5153 display the date via an aperture at 3 o’clock, while references 6000 and 6006 feature a date scale around the dial’s edge. The 6000 series also feature small seconds between 4 and 5 o’clock.

The Patek Philippe Calatrava Travel Time (reference 5134) was introduced in the 2000s, with the classic Calatrava dress watch aesthetic, yet fitted with a useful dual time complication. This design retained the three hands at center but added a jumping hour hand activated by two pushers on the case, and two subdials – one for small seconds and another for 24-hours.

The Patek Philippe Calatrava Pilot Travel Time (reference 7234) pays tribute to Patek’s aviator watches from the 1930s. Introduced in 2015, this version of the Calatrava also belongs to the Complications line, due to the addition of a skeleton hour hand displaying a second time zone. It boasts a utilitarian look with its sporty case, matte dial with large white Arabic numerals, and calfskin strap. Earlier versions measured 42mm, followed by 37.5mm versions. It is available in white gold and rose gold.

Introduced in 2019, the Patek Philippe Calatrava Weekly Calendar adopts a sector style dial showing the calendar months on the outer edge, week numbers right next to it, and days of the week on the center of the dial. This watch adds a casual option to the rest of the Calatrava line with a seldom-used stainless steel case and calfskin strap, plus the use of handwritten typography on the dial text.

Each Patek Philippe model goes by a reference number that helps document its manufacture and sale.

They are formed by an alphanumeric code as follows: xxxx/xxxxX-xxx, but Patek collectors and enthusiasts commonly use the first four digits to refer to a particular model.

Next three digits – these are randomized numbers, however models from the same family usually share these three digits.

Next five digits / letter – Following the backslash are a set of alphanumeric codes. These denote details of the case, bracelet, or dial as follows:

Next to the digits is a letter that indicates what material was used for the watch case:

The reference number ends with three digits after the hyphen. These indicate a version of the dial within a reference, as Patek Philippe manufactures several different dial versions for the same model. ”001” is the first dial version, then ”010”, ”011”, and ”012” for next three versions, and so on.

WHAT IS A PATEK PHILIPPE CALATRAVA?

The Patek Philippe Calatrava is a line of classic dress watches inspired by the “less is more” Bauhaus school of thought. It was the flagship design of Patek Philippe for the modern era, and the first to be created under the Stern family. Round cases, organic lines, and minimalist dials define the Calatrava collection in a nutshell.

WHY IS THE PATEK PHILIPPE CALATRAVA SO EXPENSIVE?

Patek Philippe has proven itself the benchmark among Swiss luxury watches, with its long and illustrious history, and pioneering innovations in watchmaking.

The Genevan manufacturer has also established quality standards that far exceed average industry codes. Patek Philippe takes no shortcuts – cases are made using traditional techniques, movements are designed and manufactured in-house, and most of their watches are assembled completely by hand.

DOES THE PATEK PHILIPPE CALATRAVA HOLD ITS VALUE?

As a Patek Philippe watch, the Calatrava stands to retain its value well – in fact, Patek Philippe’s resale value trumps all other watchmakers, vintage or modern. The Calatrava’s simple styling and lasting visuals means it will never go out of fashion, making it easier to find an interested buyer should you choose to resell.