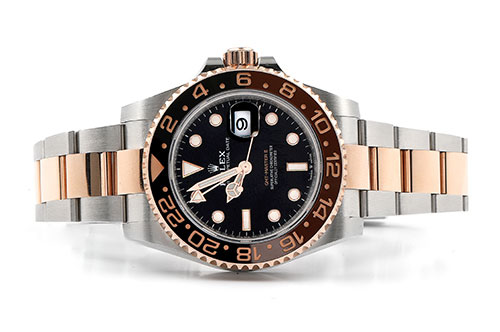 The Rolex GMT-Master was introduced in 1954, as a response to the request of Pan Am airlines, for a reliable watch that can display two time zones at once. Rolex was able to accomplish this with the now iconic 24-hour hand and bi-color 24-hour bezel. In its almost 70-year history, the Rolex GMT-Master has gone through several updates, while keeping the design DNA that fans have come to love. Explore our collection of authentic, pre-owned Rolex GMT-Master watches for men and women at SwissWatchExpo. 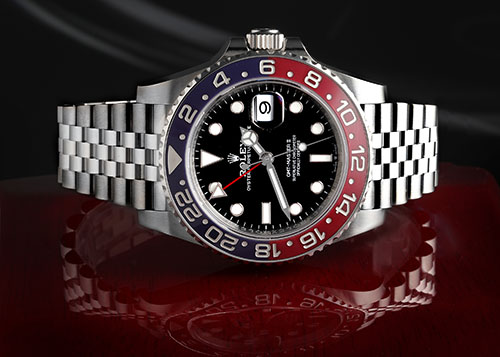 The Rolex GMT-Master is the world’s most famous travel watch. Introduced in 1954, it is a product of the collaboration between Rolex and Pan American Airways. As international travel became more sophisticated in the 1950s, pilots needed a tool to simultaneously reference two different time zones. The Rolex GMT-Master’s 24-hour bezel and GMT-hand aided in telling time in more places than one.

These features of the GMT-Master not only remained over its almost 70-year history, it also influenced an entire genre of GMT and travel watches. As the collection evolved with the use of different materials and modern updates to the design, it also gained an audience far beyond the aviation crowd. Today, the GMT-Master is one of the most collectible and popular watches in the Rolex portfolio, favored by a wide range of individuals – from celebrities and seasoned watch collectors, to military and aviation personel, and everyone in between.

Explore our selection of Rolex GMT-Master watches at SwissWatchExpo.com.

A BRIEF HISTORY OF THE ROLEX GMT-MASTER

From the 1950s to the 1960s, Rolex focused on creating watches that would aid professionals in their line of work. In 1953, they introduced their first “tool watch”, the Explorer, with a robust case for exploration. The year after, they launched the Submariner, which came with a larger case and rotating bezel to aid in reading time underwater.

By the mid-1950s, advances in aviation made transcontinental flights available commercially, and so pilots began crossing time zones more frequently. As flight crews began bouncing between different time zones, it proved difficult to have a grasp on time.

Pan American Airways, then the principal carrier of the United States, commissioned Rolex to create a watch that would show the time in both the departure city and the destination.

The first generation of the GMT-Master was the ref 6542 which ran from 1954 to 1959. It came in a 38mm Oyster case, with a 50m water resistance. The earliest examples came with bezels made of Bakelite, a plastic made of synthetic components. As this material is prone to cracking, Rolex recalled these bezels and replaced them with anodized metal ones by 1956.

The first version of ref 6542 was a bi-color blue and red bezel which matched the colors of the Pan Am Airways logo. In 1958, Rolex introduced a new version in solid 18k yellow gold with a burgundy-brown bezel. Over this period, Rolex used three automatic calibers for the ref 6542 – caliber 1036, then 1065, and finally the 1066.

In 1959, Rolex introduced the second generation of GMT-Masters with the ref 1675. It ran until 1980, making it one of the longest-running Rolex references to date. Over its production period, Rolex made many changes to the collection. The most notable developments were the introduction of crown guards and addition of the “Superlative Chronometer Officially Certified” dial marking beginning in 1960; the switch from gilt to matte dials in 1966, and the introduction of hacking seconds in 1971.

The ref 1675 also saw wider variations in terms of metal, bezel, and bracelet design, with the introduction of the Jubilee bracelet, as well as solid black and blue bezels to the collection.

In 1970, Rolex introduced a two-tone version with the ref 1675/3. Famously known as the Root Beer, it is one of the most iconic takes on the GMT-Master with its brown-yellow aluminum bezel.

From 1980 to 1988, Rolex ran the ref 16750, which ended the long reign of the 1675 and introduced the quick set date, made possible by upgrading to the new Caliber 3075 movement. It also doubled the water resistance of the GMT-Master from 50 to 100m (330 feet). This reference is considered a transitional model, as Rolex would introduce the GMT-Master II come 1983.

The Rolex GMT-Master II was introduced with the ref 16760 and ran simultaneously with the GMT-Master until the late 1990s. While the two watches look nearly identical, the main difference really lies inside. The GMT-Master II comes with a movement that allows for an independently adjustable hand, which can be adjusted without disturbing the second, minute, and 24-hour hand. It also introduced a rotatable bezel, which allows the wearer to reference a third time zone.

In 2005, Rolex celebrated the 50th anniversary of the GMT-Master with a redesign of the GMT-Master II. It introduced the Cerachrom ceramic bezel to the collection, as well as the Super Case with thicker lugs and crown guards. The first version came in an 18k yellow gold case with a single-color bezel in black; this was followed by a steel version in 2007. The bracelet was also modernized, incorporating solid center links and a new clasp design.

While GMT-Master watches have always had dual-color bezels, it proved challenging to create them with the new Cerachrom material.

That all changed in 2013 with the introduction of the GMT-Master II ref 116710 BLNR, more famously known as the Batman. Rolex developed a patented process to create the bi-color bezel, wherein the bezel starts out as an all-blue porous piece of ceramic, where black coloring is added.

In 2014, the Rolex Pepsi returned, not only with the modern case and Cerachrom bezel, but also in solid 18k white gold – a material never before seen in the GMT-Master. Rolex did eventually introduce a steel version of the Rolex Pepsi in 2018, also bringing back the Jubilee bracelet to the collection.

The year 2018 proved to be big for the GMT-Master II. Aside from the new Pepsi GMT with a Jubilee bracelet and new generation 3285 movement, Rolex also introduced the first ever GMT-Master II watch in Everose gold, their patented rose gold alloy. There are two variations of this watch – one in all-Everose gold and another in two-tone steel and Everose gold. Another first was the brown-black Cerachrom bezel that came with it. While it is reminiscent of the Root Beer, this color combination is technically new.

In 2021, Rolex silently re-introduced the Oyster bracelet to the steel GMT-Master II Pepsi and Batman editions.

KEY FEATURES OF THE ROLEX GMT-MASTER

The Rolex GMT-Master has been a constant presence in the Rolex lineup since 1955. Between the GMT-Master and GMT-Master II, the collection has had a wide range of different configurations as we’ve seen above, but its key characteristics remain.

The Rolex GMT-Master has always been made with an Oyster case, which has measured 40mm and provided 100m water resistance since 1980. The collection is among the most varied in terms of material options, with models in steel, yellow gold, and two-tone steel and yellow gold. In 2014, Rolex introduced the first GMT-Master II in 18k white gold, followed by the first GMT-Master II models in Everose and two-tone Everose and steel in 2018.

The defining feature of the GMT-Master is that it allowed the wearer to simultaneously reference two (and eventually three) different time zones. To aid this, the GMT-Master was equipped with a bi-directional rotating 24-hour bezel, which is also the most recognizable trait for the collection.

Many of the bezels feature two colors, which have spurred nicknames from the Rolex watch community.

PEPSI – blue and red bezels. Originally produced to match Pan Am Airways’ logo, this nickname is inspired by the famous soda company’s logo.

ROOT BEER – brown and yellow / gold bezels. In keeping with the soda theme of the collection, two-tone watches with brown bezels and bezels with half-brown and half-gold bezels are called by this name.

BLUEBERRY – refers to a very rare group of ref 1675 bezels made in solid blue color.

The material used for the GMT-Master and GMT-Master II bezel inserts have also evolved throughout its production. Rolex used Bakelite from 1955 to 1959, aluminum from 1960 to 2005, and has been using Cerachrom since 2005. A patented Rolex creation, Cerachrom is a hard ceramic material that is resistant to scratches and fading.

The dial layout of the GMT-Master II is similar to other Rolex Professional models. A triangular marker appears at 12 o’clock, baton hour markers are used for the 6 and 9 o’clock positions, while round markers appear on the rest of the dial. Mercedes style hands are used for the hour and minute hands, while an arrow tip appears on the 24-hour hand.

Almost all GMT-Master dials are in black, but Rolex has made a few special dials: champagne for “Serti” gem-set dials, a green 50th anniversary dial, blue and meteorite dials for the Pepsi model, and even full diamond pavé dials.

Both the three-link Oyster bracelet and five-link Jubilee bracelet have appeared in the collection over the years. Depending on the model, there are stainless steel, solid gold, and two-tone variations of both bracelets.

COMMON QUESTIONS ABOUT THE ROLEX GMT-MASTER

The Rolex GMT-Master is one of the most iconic travel watches of all time. It is famous for its 24-hour bezel, which aids the reading of time simultaneously in different time zones. Here are the most frequently asked questions about the Rolex GMT-Master.

WHAT IS THE ROLEX GMT-MASTER?

WHAT DOES THE ‘GMT’ IN ROLEX GMT-MASTER MEAN?

GMT stands for Greenwich Mean Time. With increased globalization and international trade, it became necessary to have a standardized time zone to aid communication between nations and military coordination. The local clock time at Greenwich, London became the reference for every time zone in the world, where time in other countries are indicated by adding or subtracting hours from GMT time.

HOW DO I SET A ROLEX GMT-MASTER?