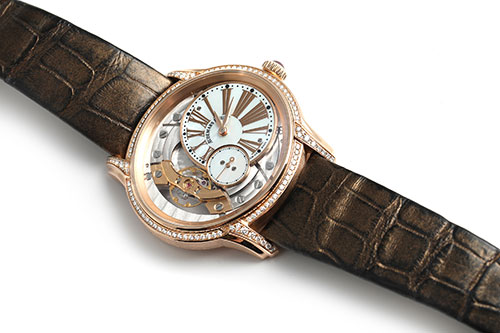 Introduced in 1995, just before the new millennium, the Audemars Piguet Millenary marries contemporary and neo-classical design. This line of dress watches stands out with their elliptical cases, off-centered and open worked dials, and intricate diamond settings – all of which showcase the brand’s technical and aesthetic sleight of hand. The offbeat collection features 39.5mm cases, making it suitable for both men and women. Explore our selection of Audemars Piguet Millenary watches at SwissWatchExpo.com. 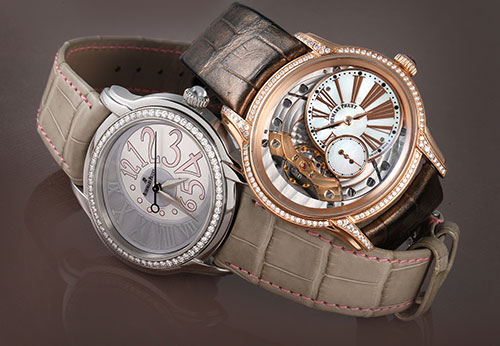 The Audemars Piguet Millenary is one of the most immediately recognizable models from the manufacture. With its elliptical case and eccentric dial designs, the bold Millenary has become a tour de force in technical prowess and creative design from Audemars Piguet.

Introduced in 1995, the Millenary’s design was based on a vintage oval shaped Audemars Piguet timepiece. It was revived to celebrate the upcoming turn of the millennium and given a three-dimensional composition. Today, the Millenary is well recognized for its off-center dial and ingenious way of displaying the movement through an eye-catching but still legible skeletonized dial. It has also become a canvas for the brand’s most impressive achievements – including minute repeaters and quadrennial complications.

Its now uniform 39.5 mm case has also blurred the line between men’s and women’s watches, with the neo-classical design and technical savoir faire meeting every collectors’ desire for an offbeat but elegant timepiece. Explore our selection of Audemars Piguet Millenary watches at SwissWatchExpo.com.

A BRIEF HISTORY OF THE AUDEMARS PIGUET MILLENARY

The Audemars Piguet Millenary is one of the youngest collections from the Swiss manufacture. Introduced in 1995, it stemmed from a vintage design from 1951, which was eventually resurrected to welcome the impending new millennium.

With Audemars Piguet’s reputation for geometric designs – particularly for the largely successful Royal Oak and Royal Oak Offshore – the Millenary was met with initial hesitation but turned out to be a refreshing addition to the portfolio.

In the year 2000s, the Millenary was given a more unique take. Cases were rendered in different sizes up to 47 mm, and the asymmetric dial with off-center display was introduced. In 2011, the Millenary 4101 introduced the true offset time display, where the ovular movement, with its reverse architecture, allowed the balance wheel to be viewed in front. The Millenary 4101 became the emblematic model of the collection, with succeeding models featuring the unique off-center dial.

Over the years, the Millenary line was expanded to include cases in precious metals, and complications including chronographs, minute repeaters, perpetual calendars, and wandering hours display. Tweaks were also made to modernize the original design – the lugs became more pronounced, the numerals larger and more overt, and the dials increasingly ornate. The Millenary soon became a canvas for offbeat creativity within the Audemars Piguet lineup.

This perspective became more apparent with the company choosing the Millenary as the stage for some of their groundbreaking innovations. In 2006, it housed the lubricant-free AP Escapement in the Cabinet N° 5 of the collection Tradition d'Excellence, and later in the Millenary Minute Repeater. More recently in 2019, the Millenary also housed the new calendar complication, the Quadriennium. The demi-perpetual calendar complication automatically corrects the date for all months, including February, three out of every four years.

Despite being a young collection, the Audemars Piguet Millenary has distinguished itself from the mass of watches with a unique aesthetic and technical sleight of hand.

ABOUT THE AUDEMARS PIGUET MILLENARY COLLECTION

The Audemars Piguet Millenary stands out with its combination of neo-classical design and skeletonized movements. One would better appreciate the Millenary upon understanding how it was built.

To make its inner workings visible, the movement is built in a completely different way from traditional watches. Skeletonization demands that the movement’s architecture be carved away, while keeping the movement’s function, accuracy, and structural integrity intact. This fine art results in a movement that’s both stunning and lightweight.

Over the years, the Millenary has also been a venue for ornate designs such as diamond-studded bezels, mother of pearl and opal dials, and gem-encrusted crowns. Here are some of the most popular and noteworthy models from the collection.

Introduced in 2011, the Millenary 4101 overturned existing ideas with an ingenious design. The Caliber 4101 was manufactured in reverse, for the watch face to display components that are usually hidden on the backside of the watch.

The Millenary 4101, model 15350, features the caliber 4101, a self-winding movement which the watch is named after. It has a whopping 60 hours of power reserve, and features a 22-carat gold oscillating weight.

Another highlight of the collection is the Audemars Piguet Millenary Minute Repeater. Introduced in 2013, it features an escapement, double balance spring, striking mechanism and gongs developed by Audemars Piguet themselves.

Within the watch is AP’s in-house caliber 2928, which has an impressive 165-hour power reserve, good for almost a full week. Together, these mechanisms ensure more efficiency and accuracy.

The Audemars Piguet Millenary Quadriennium features a quadrennial calendar (also called semi-perpetual or four-year calendar), which comes between the annual and perpetual calendar complications. In general, one needs to adjust the date on most watches on the 30th or 31st of every month. The annual calendar only needs this adjustment at the end of February, while the perpetual calendar complication does not require any adjustment for at least 100 years. The Quadriennium, meanwhile, needs adjustment only in leap years (once every four years) when there is a 29th of February.

The Audemars Piguet Millenary Philosophique tells time philosophically, with just a single hand on its dial. Inspired by the aesthetics of 17th-century single-hand timepieces, the Philosophique defies today’s conventions of time measurement and is a statement against the frenzy of today’s world. This is Audemars Piguet’s statement of creative freedom expressed in frosted gold cases and hammered textured dials.

Much like other watchmakers, Audemars Piguet uses reference numbers to properly document the sale and manufacture of their timepieces. The company uses three codes to identify their watches: the movement number, case and serial number, and reference number.

The movement number is engraved next to the balance wheel. The case number or the serial number, meanwhile, can be found engraved on the outside of the caseback.

Each serial number comes with a letter that denotes its manufacturing series, which also tells us the production date of AP watches from 1975 onwards. Below are the series letters:

The two letters that come after the numbers (e.g. 15300ST) indicate the type of metal used for the watch case.

The remainder of the reference number is composed of a randomized set of numbers to document their sequence in the production.

WHAT IS AN AUDEMARS PIGUET MILLENARY WATCH?

The Audemars Piguet Millenary is a collection of horizontal ovoid shaped watches. Most models feature an off-center hour and minute counter, and in the background, a skeletonized dial revealing the movement. There is also a sub-collection featuring hammered textured dials. It was introduced in 1995 to welcome the impending third millennium.

ARE THERE AUDEMARS PIGUET MILLENARY WATCHES FOR BOTH MEN AND WOMEN?

Currently, the Millenary is available in 39.5 mm sizes which are considered unisex models. Years before, the smallest design was 39.5 mm and was intended primarily for women and those with smaller wrists. Some 45 and 47 mm versions were also made for a few years, with men in mind. While these have been discontinued, they can be found in the secondary market.

As part of the “Holy Trinity” of watchmakers, Audemars Piguet watches hold a revered status among luxury watches – known for their excellent craftsmanship, innovative technology, and timeless design.

As of 2022, Audemars Piguet also limits their production to 40,000 units annually, making for a small inventory of models in existence.

All these considered together with constant demand, Audemars Piguet watches have a firm grip on their value.