The Cartier Baignoire collection is a prime example of the French maisons mastery of shapes. Based on an early-1900s design made by Louis Cartier, the Baignoire is characterized by an elliptical shape forged into a single line. By taking the traditional round case and stretching it out, the Cartier Baignoire follows the curve of the wrist and gives off profound wrist presence. From the classic Baignoire to the bolder Baignoire Allongée, the collection is offered in various gold finishes, often dressed with pavé diamonds for an even more regal appearance. Explore our collection of Cartier Baignoire watches at SwissWatchExpo.com. 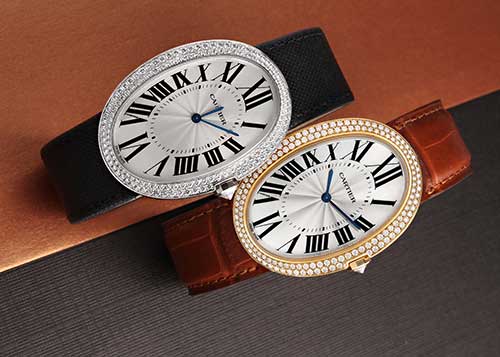 Beyond its cult rectangular Cartier Tank watch, the French maison has produced countless watches in different shapes, displaying their prowess in crafting watchmaking forms. The Cartier Baignoire is their take on the classic round watch, with Louis Cartier questioning its traditional shape by stretching it. With two parallel lines enclosed by curves, its earliest design resembled a bathtub, from which it got its name.

The Cartier Baignoire has evolved from its original form in the 1950s, presenting us with the two designs that we know today: the standard Baignoire in a classic oval shape with gold gadroons; and the oversized and narrowed Baignoire Allongée, in all its excess and grandeur.

A BRIEF HISTORY OF THE CARTIER BAIGNOIRE COLLECTION

The story of the Cartier Baignoire began in 1912. Louis Cartier, third generation owner and chief designer of the brand, took the traditional round watch shape and decided to stretch it out. He presented it to one of their top clients, the Russian Grand Duchess Pavlovna, and it would remain an exclusive model for the next four decades.

In 1957, Cartier decided that it was time for this design to meet the world. It was launched as a collection with the name Cartier Baignoire. The stylistic design of the new watch formed two parallel lines enclosed by curves, resembling a baignoire, or French for bathtub.

Generations of the Cartier Baignoire
The first generation of Cartier Baignoire watches had a slightly curved oval shape, Roman or Arabic numerals stamped on the dials, and gold gadroons encircling the dial.

The 1960s marked the second generation of the Baignoire watch. In the workshops of Cartier London, the Baignoire Allongée was born. True to the beat of Swinging London, this new design was oversized and full of character, stretched across women’s wrists. It exuded style and excessive chic while remaining wearable and versatile.

The daring design didn’t stop at its shape – models were also rendered with extravagant bezels with sculpted gold studs in the shape of clou de Paris. It showed the willingness and ability of the usually traditional house of Cartier to adapt its designs with current trends.

Also produced in extremely limited number in the 1960s was the Maxi Oval. In contrast to the Allongée, this design was much wider and taller, almost close to the traditional round shape. These were produced in very limited numbers and are a rare sight.

Legend has it that the avant garde Cartier Crash, whose molten effect has made it so famous, was inspired by a Cartier Baignoire that was caught in a car crash and almost melted. It certainly shocked Cartier purists and gave a punk rock edge to their repertoire.

Over the years, the Cartier Baignoire has come in a multitude of sizes, proportions, and materials, but the smooth oval design has endured.

The Cartier Baignoire today
In 2019, Cartier relaunched the Baignore and Baignoire Allongée. Like the 1957 original, the new designs strike a balance between sophistication and character. The shapes remained unchanged, but improvements were made – the bracelet was made narrower for a dressier look, sand-blasted backgrounds add more interest to the models, the case back was seamlessly integrated with the case, and the watches are fully conformed to modern quality standards of precision and water resistance.

Four sizes are currently available for the Cartier Baignoire:

The collection employs 18k yellow, white, and rose gold construction, with choices between diamond bezels or pavé diamonds all over the timepiece.

Today’s Cartier Baignoire collection offers models that elegantly hug the wrist, while giving wearers the choice between discreet designs and overt, statement pieces.

All Cartier models are given a reference number to properly document their manufacture and sale. These are composed of 8 characters – they usually begin with a letter, followed by an alpha-numeric combination.

Below are the reference numbers for the modern Cartier Baignoire collection:

COMMON QUESTIONS ABOUT THE CARTIER BAIGNOIRE

WHAT IS A CARTIER BAIGNOIRE WATCH?

The Cartier Baignoire is a collection of elliptical dress watches. First designed by Louis Cartier in 1912, the original models were exclusively gifted to top clients in its first few decades.

It was in 1957 that the Baignoire was first released to the public. It has since gone through several iterations with various dial styles and elongated shapes, but always with its elliptical case.

It was reintroduced by Cartier in 2019.

IS THE CARTIER BAIGNOIRE WATERPROOF?

Like many of Cartier’s dress watches, the Baignoire models are water resistant to 30 meters or 100 feet. With this level of water resistance, they can be worn on a daily basis and still have enough protection from splashes (such as handwashing).

However, they are not suited for long-term exposure to moisture, such as when swimming or doing water sports.

IS THE CARTIER BAIGNOIRE DISCONTINUED?

The Cartier Baignoire remains on the brand’s catalog as of 2022. Four sizes are available, and in various gold finishes.