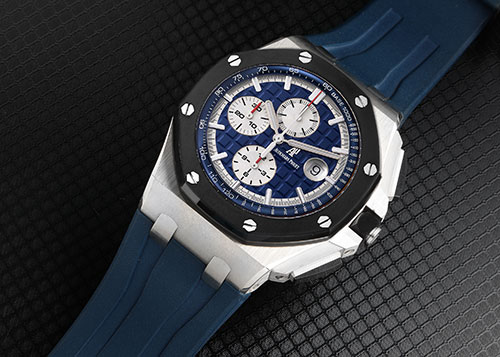 The Audemars Piguet Royal Oak Offshore is a bolder and sportier take on the iconic Royal Oak. Introduced in 1993, it was the brand’s answer to the growing demand for larger timepieces, and one of the first to usher in the oversized watch trend.

Aside from its bigger case size and bulkier profile, the Royal Oak Offshore collection has also been an avenue for the brand to experiment. With the aim of bringing in new and younger audiences, the Royal Oak Offshore paved the way for the use of novel materials such as ceramic or carbon fiber, and vibrant colors ranging from pastel to neon.

With its decidedly modern look, the Royal Oak Offshore hit its stride with young collectors, active lifestyle buyers, and tastemakers in sports and entertainment. Today, the collection shows the manufacture’s willingness to innovate, even with their long history and established prestige. Explore our selection of Audemars Piguet Royal Oak Offshore watches at SwissWatchExpo.com.

A BRIEF HISTORY OF THE AUDEMARS PIGUET ROYAL OAK OFFSHORE

Much like the iconic Royal Oak, the Royal Oak Offshore demolished the established conventions of its time. In the 1970s, the Royal Oak introduced the concept of the steel luxury sports watch, and ignited interest in mechanical watches, just when the Quartz Revolution almost killed the Swiss watch industry.

While the Royal Oak Offshore was introduced in 1993, AP’s CEO Stephen Urquhart, had already thought of creating a new version of the Royal Oak as early as 1989. With the aim of appealing to younger clientele, he worked with designer Emmanuel Gueit, who conceptualized a more robust take on the Gerald Genta-designed classic.

The very first edition was a stainless steel model with a 42mm case, bearing the reference number 25721ST. It was quickly nicknamed "The Beast" because of its imposing size – one that has not been seen in the commercial watch industry during that time. It also had a blue dial and vertical chronograph registers.

The initial plan was to launch it in 1992, on the 20th anniversary of the Royal Oak. Because of uncertainty and revisions, the launch was postponed to the following year’s Baselworld.

The leadership team itself was pragmatic about launching this revolutionary take on the classic Royal Oak. They only created 100 pieces for the first batch and stamped the casebacks “Royal Oak” in case the collection ended there. Just like the Royal Oak, it was a slow burn for the Offshore, but it achieved success by appealing to collectors with active lifestyles and desire for larger, more masculine watches.

Gerald Genta, the creator of the Royal Oak, expressed his misgivings about the Royal Oak Offshore and became its staunchest critic. The first to truly understand its aggressive design were young and wealthy Italians, and it received even further recognition when alpine skiing legend Alberto Tomba, the country’s most beloved athlete, started wearing a Royal Oak Offshore.

It slowly built momentum when personalities such as Michael Schumacher and Arnold Schwarzenegger started wearing it, too.

Earlier productions of the Royal Oak are referred to as the D, E, or F series, where each letter corresponds to production years. The D and E-Series Royal Oak Offshore starts with the original reference 25721 made in 1992, and the last from this series was produced in 1999. The D-Series was a smaller batch making up 1,300 units, with tighter Tapisserie motif on the dial and blue paint that tends to fade over time.

For the E-Series watches, the blue paint is noticeably different, this time with a purplish hue. The production was increased to 2,300 units.

For the F-Series which were produced between 1999 and 2003, the paint used was more stable, and these watches rarely show their age, unless damage is present.

Over the years, the Royal Oak Offshore has become a venue for Audemars Piguet’s experimentation. Some novel iterations were introduced over the years:

Nearly three decades later, the innovative spirit continues within the Royal Oak Offshore. A variety of materials has been explored – from steel and precious metals to more novel materials like carbon fiber. Refinements have also been introduced, such as complications, ergonomic cases, an interchangeable strap system, and in-house movements.

From the original steel Audemars Piguet Royal Oak Offshore chronograph, the collection now offers countless models made of different materials, in various styles, sizes, and complications. Here are the sub-collections within the Royal Oak Offshore line.

The Royal Oak Offshore Self-Winding Chronograph comes in men’s and women’s models, sized 37mm to 44mm. Materials range from steel, gold (yellow and white) and titanium. Some models come with ceramic bezels, rubber straps, and vibrant colors that lends an even more powerful look to the Offshore.

The Royal Oak Offshore Diver was introduced in 2010. Equipped with a rotating inner bezel with a diving scale, water resistance of 300m, and quick-change straps, the Offshore Diver is ready for water sports. All watches in the collection measure 42mm, and come in a choice of steel or white gold cases.

The Royal Oak Offshore Tourbillon Chronograph boasts of contemporary architecture. Fitted with 45 mm cases in rose gold, titanium, or ceramic, it features octagonal-shaped cut outs on the sapphire crystal and an ornate cut out dial, giving the movement the greatest visibility possible. It runs on the 2947 Manufacture composed of 353 parts and 30 jewels, which provides a power reserve of 7 days.

The Royal Oak Offshore Grande Complication is packed with multiple functions including a minute repeater, split-seconds chronograph, perpetual calendar, hours, minutes, and small seconds. Powered by the 2885 Manufacture, it also provides a water resistance of 2 ATM / 20 meters and a power reserve of up to 45 hours. It comes in a 44mm case in black or white ceramic.

Each Audemars Piguet watch has a movement number that is engraved next to the balance wheel. The case number or the serial number, meanwhile, is engraved on the outside of the caseback.

Each serial number comes with a letter that refers to a particular manufacturing series, which can tell us the production date of AP watches from 1975 onwards. Below are the series letters:

For reference numbers, Audemars Piguet uses a randomized system. The entire reference number is composed of 17 alpha-numeric digits, but each model is usually referred to only by the first 7 digits, composed of a 4 or 5-digit number and two letters.

The letters that come after the reference numbers (e.g. 15400ST) indicate the type of metal used for the watch case, as follows:

The rest of the reference number is composed of a randomized set of numbers marking their sequence in the production.

The Audemars Piguet Royal Oak Offshore is a sporty take on the iconic Royal Oak watch. With more masculine and thicker proportions, it paved the way for large-cased sizes in the luxury watch industry.

WHAT IS A ROYAL OAK OFFSHORE WATCH?

The Audemars Piguet Royal Oak Offshore is a sportier and more masculine version of the porthole-shaped Royal Oak watch. Introduced in 1993, it was created to appeal to younger and active clientele. Royal Oak Offshore watches measure 37 to 44mm, and are at least 14mm thick. They are also equipped with pushguards to increase sturdiness.

Based on appearance alone, it is quite easy to distinguish the two models. While both possess a porthole-shaped case and geometric design, the Royal Oak has a thinner profile, approximately 10.88mm thick; while the Offshore is thicker at at least 14mm thick. The largest Royal Oak case is 41mm, while the largest Royal Oak Offshore case measures 44mm.

As one of the top 3 manufactures, Audemars Piguet watches enjoy a more premium status among luxury watches. Currently, the company also limits their production to 40,000 units annually, making for a limited number of models in existence. With their exceptional quality, inherent prestige, and limited inventory, Audemars Piguet watches have a firm grip on their value.