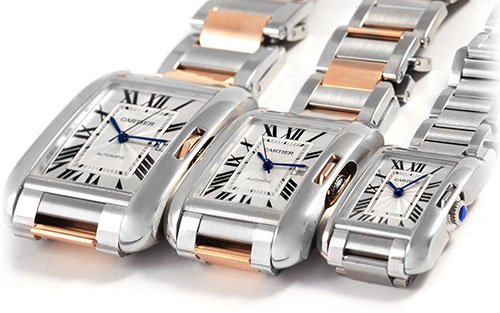 The Cartier Tank Anglaise is an updated version of the original Tank watch. Introduced in 2012, it comes as the last of three modern versions that pay homage to Cartier’s historical boutiques – the Tank Americaine (1989) for New York, the Tank Francaise (1996) for Paris, and the Tank Anglaise for the London flagship.

These three possess the timeless signature traits of the Tank watch, combined with features that reimagine the classic for the watch lover of today. The Tank Anglaise is characterized by a curvilinear case that hugs the wrist, and a special design that hides its crown within its brancards, revealing only the precious sapphire cabochon.

While it moves away from the Art Deco shape of the original Tank, the famous flinque dial, Roman numerals, and blued steel hands and sapphire crown remain. The result is an overall softer look that can be worn for any occasion.

The Cartier Tank Anglaise comes in a variety of sizes, with models in steel, gold, and two-tone steel and gold, as well as a range of movements. There’s certainly one for those who seek a Tank watch with a modern twist. Explore our collection of Cartier Tank Anglaise watches at SwissWatchExpo.com.

A BRIEF HISTORY OF THE CARTIER TANK ANGLAISE COLLECTION

The original Cartier Tank watch was created by third-generation owner Louis Cartier in 1917. Inspired by the Renault Tanks used by the British armed forces during World War I, the easily recognizable rectangular design has become an icon of horology.

Over the next few decades, different iterations of the Tank would be born. Some curved on the wrist like the Cintree and eventually, the Americaine. There are also more contemporary and angled renditions like the Basculante and Francaise.

Leading up to the 100th anniversary of the Cartier Tank, the French maison worked on new designs to celebrate their flagship stores in New York, Paris, and London. The Tank Americaine was introduced in 1989, followed by the Tank Francaise in 1996.

In 2012, the Tank family got a new watch member in the form of the Tank Anglaise. It was designed as a homage to the third historical pillar in Cartier’s development: England.

True to the original Cartier Tank, the Tank Anglaise retained the rectangular shape of the case. What makes it distinct are the curvilinear edges, made to sit more comfortably on the wrist, and the unique design of its crown. Instead of protruding from the side of the case, it is hidden within the brancards of the watch, revealing only the signature blue sapphire cabochon. With these changes, it brought new life to the Cartier Tank.

Some versions of the Tank Anglaise integrate a dressy strap in black or brown alligator leather, but for the most part the models come with metal bracelets with seamlessly linked plates. Select XL models in gold also come with two rows of diamonds on the brancards for an extra dressy touch.

Ladies models are powered by quartz movements, medium and large by automatic movements, while XL the Tank Anglaise comes with a Caliber 1904 MC automatic – the first Cartier in-house movement introduced in 2010.

The Cartier Tank Anglaise ceased production around 2020 but remains coveted in the secondary market. It is proof that even new designs can be the epitome of the house’s tradition, elegance, and excellence in the world of watchmaking.

ABOUT THE CARTIER TANK ANGLAISE COLLECTION

Much like the original Cartier Tank, the Tank Anglaise is built with a rectangular shape. Its rendition adds a touch of softness and an ergonomic fit with curved edges, plus a contemporary look care of the hidden crown.

What also sets the Tank Anglaise apart from the rest of the catalog is the availability of large cases, proving that elegance doesn’t always have to be puny. This makes the Tank Anglaise an excellent choice for men and a shoo in as a his-and-hers model.

Within the Cartier Tank Anglaise collection are different sizes and functions as follows:

Small – 30.2 x 22.7 mm powered by a quartz movement. These come in steel, yellow and rose gold, and two-tone finishes. There are also models with diamonds on the flinque dial in place of markers.

Medium – 39.2 x 29.8 mm powered by an automatic movement. These come in steel, rose gold, yellow gold, white gold, and two-tone steel and rose gold. There are models with two rows of diamonds on the brancards. Leather strap available for solid gold editions.

Large - 47mm x 36.2 mm powered by the 1904 MC. These come in steel, rose gold, yellow gold, white gold, and two tone steel and rose gold. There are models with two rows of diamonds on the brancards. Leather strap available for solid gold editions.

A very rare large edition comes with an 18k white gold case, paved with white brilliant cut and baguette diamonds all over.

Every Cartier watch design is given a reference number, in order to properly document their manufacture and sale. Cartier’s reference numbers are randomly assigned and are composed of 8 characters. They begin with a letter, followed by an alpha-numeric combination.

Below are the reference numbers for the Cartier Tank Anglaise collection:

WHAT IS A CARTIER TANK ANGLAISE?

The Cartier Tank Anglaise is a member of the Tank watch family, introduced in 2012. It completes the trio of watches that pay homage to the French maison’s flagship stores in New York, Paris, and London.

The Tank Anglaise features curved edges that sit ergonomically on the wrist, as well as a unique crown design that is embedded on the sides or brancards of the watch.

They are available in stainless steel, solid gold, and two-tone steel and rose gold editions for both men and women.

IS THE CARTIER TANK ANGLAISE WATERPROOF?

Cartier Tank Anglaise watches are water resistant to 3 bar (or approximately 30 meters). This level of water resistance is enough to protect it from rain or hand washing but is not intended to be used for water activities like swimming or snorkeling. The Tank Anglaise is a casual everyday watch that can also be worn in formal settings.

IS THE CARTIER TANK ANGLAISE DISCONTINUED?

The Cartier Tank Anglaise has been removed from the Cartier website in 2021, although no announcement has come from the brand itself, even as the design turned a decade old in 2022.

Tank Anglaise models can still be had by shopping from reliable pre-owned watch retailers. Explore our selection of Cartier Tank Anglaise watches here.