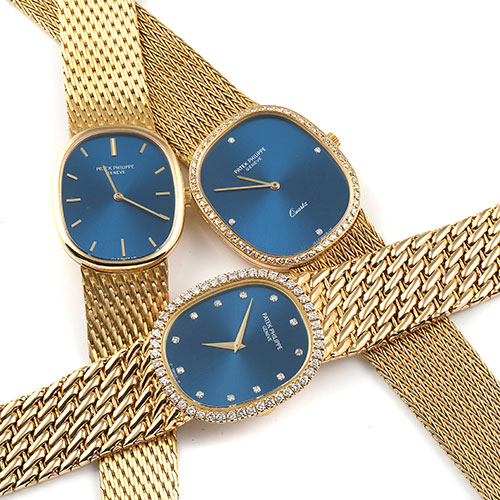 The Patek Philippe Golden Ellipse is characterized by an elliptical case, shaped between a circle and a rectangle. Its design was inspired by the principle of the “Golden Ratio”, an ancient mathematical formula that defines a divine proportion – one that has become the basis of the greatest works of art and architecture. The softly curving case and simple dial give the Golden Ellipse a sense of harmony that is not only pleasing to the eye, but also goes well with any ensemble. Explore our selection of Patek Philippe Golden Ellipse watches for men and women at SwissWatchExpo.com. 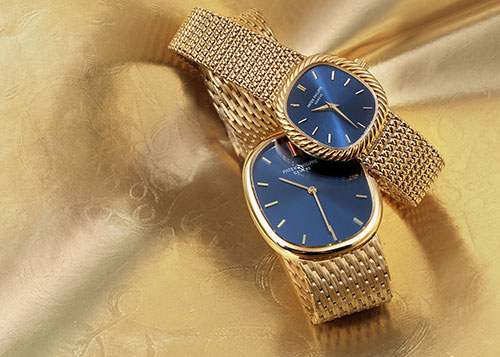 The Patek Philippe Golden Ellipse is the second longest-running collection in the brand’s catalog. Not quite round, and not quite rectangular, the minimalist timepiece lets its elliptical shape do all the talking.

Introduced in 1968, the Golden Ellipse’s shape was considered an outlier among watches. Apart from its atypical form, it was the Golden Ellipse’s sense of harmony that made it a cult classic. This was no arbitrary oval, after all. The shape is based on the ‘golden ratio’, a mathematical proportion found everywhere in nature, and replicated in iconic works of art and architecture, that forms a universally appealing aesthetic.

In its more than half a century of existence, the Golden Ellipse has been made in a range of metals, in varying sizes, and with a choice of versatile dial colors – paired with its enduring charm, the Golden Ellipse collection appeals to a wide range of watch lovers. Explore our selection of Patek Philippe Golden Ellipse watches at SwissWatchExpo.com.

A BRIEF HISTORY OF THE PATEK PHILIPPE GOLDEN ELLIPSE

The Patek Philippe Golden Ellipse was introduced in 1968. During this time, advances in mass production made it easier for other companies to produce timepieces, and Patek Philippe sought to create a new design that is distinguishable from any other watch.

Jean-Daniel Rubeli, Patek’s in-house stylist, is widely credited for the design of the Golden Ellipse. He took inspiration from the ‘golden ratio’ or divine proportion, which forms the basis of the greatest works of art and architecture. While the first Golden Ellipse models came in yellow gold, the collection’s name is inspired by this ratio and not by the case material.

Aside from their shape and pared-back simplicity, the first Golden Ellipses, reference 3548 and reference 3546, also stood out because of their elegant dial. Patek created a stunning starburst dial in cobalt blue, achieved through the vaporized mix of cobalt and 24K gold. While blue dials are hardly new today, this color was considered non-conformist for a watch at the time.

Shortly after the Golden Ellipse’s introduction, Patek presented a white gold option in addition to the yellow gold, with variations that include woven mesh bracelets, Roman numerals, and even diamonds on the bezel.

By the end of the 1970s, the Golden Ellipse was available in about 65 versions. In fact, the collection proved so successful that Patek offered corresponding luxury accessories like lighters, rings, cufflinks, money rings, and even clocks. In this decade, Patek also experimented with exotic dial hues like “vermeer brown” and “autumn gold” as an alternative to the classic blue dial.

In 1977, the Golden Ellipse received an important technical update: the ultra-thin automatic Caliber 240. The thinner profile of succeeding Golden Ellipse models served as a significant counterpoint against the thick quartz watches that gained popularity in the 1970s.

To celebrate the Golden Ellipse’s 40th anniversary in 2008, Patek introduced the first platinum watch of the collection. The contemporary design came with a plain blue baton dial with only accompanying minute and hour hands to mark the time.

In 2018, Patek marked the Golden Ellipse’s half-century with the release of two models and the switch to a bigger case size. The “Grande Taille” models come in larger 34.5 x 39.5 mm, with a choice between the rose gold reference 5738R with an ebony sunburst dial, or the platinum reference 5738 with a black dial and 18k white gold volute pattern plate.

The current collection of the Golden Ellipse include the 2008 and 2018 versions, but discontinued and vintage styles remain sought after by collectors.

Earlier Patek Philippe Golden Ellipse watches came in solid yellow gold versions, with different sizes for men and women, but the collection has since consolidated into Grande Taille models with contemporary sizing and a choice of rose gold, white gold, or platinum construction.

This modern interpretation of the Golden Ellipse was introduced in 2008. It comes in a “Jumbo” size 34.5mm x 39.5mm case made of platinum, the first from the Golden Ellipse line to be made in the noble metal. It retains the classic blued gold sunburst dial, this time with white gold applied hour markers. A navy blue alligator strap complements the dial.

Inside runs the self-winding mechanical movement Caliber 240. There are about 10 examples of the platinum reference 5738P that were stamped Tiffany & Co.

Introduced in 2018 to commemorate the 50th anniversary of the Golden Ellipse, the 5738R comes in a “Jumbo” 34.5mm x 39.5mm 18k rose gold case. It is paired with an ebony black sunburst dial with rose gold baton hour markers. Set within the crown is a black Onyx stone that complements the dial and the shiny black alligator strap. It is also powered by the self-winding mechanical movement Caliber 240.

Introduced in 2018 along with the 18k rose gold version, this reference comes in the same size “Jumbo” case, this time made in 18k white gold. What sets this apart is its highly original face – an 18k white gold plate is hollowed out to form the cavities to reveal the Grand Feu black enamel dial, using the champlevé technique. The gold areas left in relief are then entirely hand-engraved with an arabesques and volutes decor. On the inside is the ultra-thin self-winding Caliber 240. This piece is offered with a shiny black hand-stitched alligator strap with an 18K white gold prong buckle.

As with many watch brands, Patek Philippe uses reference or model numbers to properly document the production and sale of their timepieces. This number is often used to identify a particular design without the need to write the entire model’s name. Among Patek Philippe enthusiasts, it is common for to refer to watches using only their reference number.

A Patek Philippe reference number is formed by alpha numeric numbers as follows xxxx/xxxxX-xxx, but Patek collectors commonly use only the first four digits to refer to a particular model.

First digit – starts with 3, 4, 5, 6 or 7. Men’s watches start with 3, 5, or 6, while ladies watch models have references that start with 4 and 7. Current production Golden Ellipse models have the reference number 5738.

Next five digits / letter – A Patek Philippe reference number is usually followed by a backslash, then a set of alphanumeric codes. This set is more rigid and indicate details of the case, bracelet, or dial, and work as follows:

Following these digits are letters that denote the material used for the watch case:

The reference number ends with a three-digit number after a hyphen. These refer to a version of the dial within a reference. Patek Philippe sometimes manufactures different dial versions for the same model, so they use ”001” for the first dial version, then ”010”, ”011”, and ”012” for next three iterations, and so on.

The Patek Philippe Golden Ellipse is one of the most successful and enduring collections from the Genevan watchmaker, defined by its unorthodox shape and combination of class and simplicity.

WHAT IS A PATEK PHILIPPE GOLDEN ELLIPSE?

The Patek Philippe Golden Ellipse is a classic timepiece whose elliptical shape was derived from the golden ratio – a mathematical proportion found in nature and used in the greatest works of art and architecture. The result of this divine proportion is an aesthetically pleasing effect, which has turned the Golden Ellipse into a cult classic.

WHY IS THE PATEK PHILIPPE GOLDEN ELLIPSE SO EXPENSIVE?

Patek Philippe is widely recognized as the foremost Swiss watchmaker. Aside from its illustrious history and countless horological innovations, Patek Philippe is known for quality standards that far exceed normal industry codes.

Because of this, Patek Philippe only produces an estimated 50,000 watches a year, a very low number compared to other Swiss brands that release nearly a million watches annually.

With a limited number of models in existence, a reputation for quality and excellent, and steady demand, Patek Philippe watches command a higher price tag.

DOES THE PATEK PHILIPPE GOLDEN ELLIPSE HOLD ITS VALUE?

Patek Philippe watches hold their value significantly. With its thin profile, unique shape, and new contemporary size and design, the Patek Philippe Golden Ellipse has become in vogue once more, and continues to enjoy steady demand.