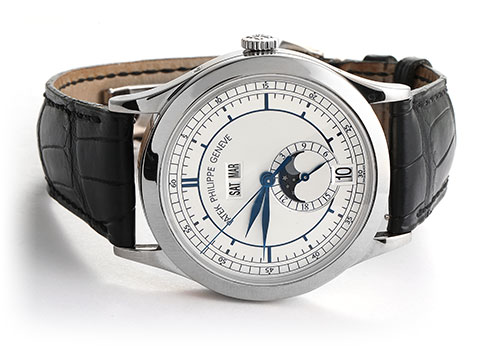 The Patek Philippe Complications collection represents the Genevan watchmaker’s mastery of horological functions beyond telling time. Having built the world’s most complicated portable timepiece twice over, the Complications line is an extension of their unparalleled expertise in watchmaking. While their technical complexity is of importance, Patek upholds complications that are useful in everyday life – such as Annual and Perpetual Calendars, World Time displays, and dual time zone watches. Explore our selection of Patek Philippe Complications watches for men and women at SwissWatchExpo.com. 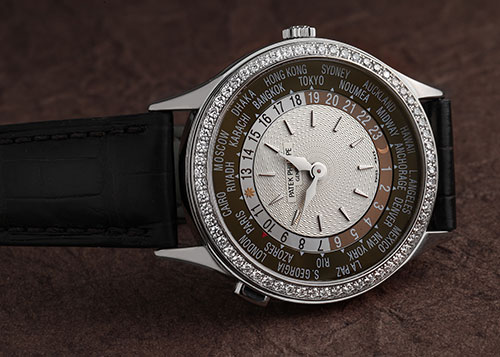 The Patek Philippe Complications and Grand Complications collection showcase the unrivaled artistry and skill of the Genevan manufacturer. Complicated watchmaking is considered the supreme test of a watchmaker’s expertise and a designer’s creativity. In its history, Patek Philippe has mastered the art of combining horological complications, having twice built the world’s most complicated timepiece, while its designs remain elegant and legible.

Capturing the essence of elite watch craftmanship and design, Patek Philippe’s complicated timepieces are sought after and collected by watch connoisseurs’ worldwide – from the most seasoned collectors to tastemakers like Eric Clapton and Ed Sheeran.

Explore our selection of Patek Philippe Complications watches at SwissWatchExpo.com.

A BRIEF HISTORY OF THE PATEK PHILIPPE COMPLICATIONS

While the company traces its roots back to 1839, it began creating a firm foundation with the partnership of two watchmakers in 1844: Polish watchmaker Antoni Patek, and French watchmaker Jean Adrien Philippe, the inventor of the keyless winding mechanism. The two met at the French Industrial Exposition in Paris, and continued the watchmaking business with Patek & Cie, beginning in 1845. By 1851, the company was renamed to Patek, Philippe & Cie.

Antoni Patek focused on honing artisanal perfection – the ability to decorate watches with engravings and precious stones that turns them into works of art. Jean Adrien Philippe, meanwhile, focused on the refinement of techniques and development of new and more advanced complications.

Following the Great Depression, Patek Philippe suffered financial distress, but was quickly acquired by the Stern brothers, owners of Fabrique de Cadrans Stern Fréres, who happened to be their exclusive dial supplier.

By 1933, they managed to create one of the most complicated watches ever created. In fact, it held the title until 1989 – the Graves Supercomplication. Bankrolled by banker Henry Graves Jr, the pocket watch featured 24 different functions including a perpetual calendar, Westminster chimes, sunrise and sunset times, and even a celestial map of New York, from the perspective of Graves’ apartment.

Patek also continued to build on the popularity of the chronograph by pairing it with other complications. These include the renowned World Time Chronograph ref 1415 released in 1940. Made by watchmaker Louis Cottier, it remains sought-after due to its easy-to-use and elegant design. It was immediately followed by the ref 1518, the world’s first series perpetual calendar chronograph.

From the 1960s, Patek continued to build on their portfolio of innovations. In 1962, they created a tourbillon movement that achieved a still-unbeaten timekeeping precision record for mechanical watches. In 1986, the company patented the secular perpetual calendar with retrograde date indication. In 1989, they introduced the Calibre 89. With 33 different functions, it was the most complicated mechanical watch in the world until 2015.

The company was kept within the Stern family, and in 1993, third-generation Philippe Stern became President of Patek Philippe. They patented and introduced the world’s first annual calendar in 1996, which has been ever present since in the watch world.

Today, Patek Philippe’s collection of complicated watches are grouped into two families – the Complications, with watches that have at least two or three features aside from time and date; and the Grand Complications, which feature over three functions. All Patek Philippe complications models come with in-house calibers and exquisite designs, all worthy of passing on to the next generations.

ABOUT THE PATEK PHILIPPE COMPLICATIONS COLLECTION

Patek Philippe Complications and Grand Complications timepieces showcase the unrivaled expertise and knowledge of the manufacture in creating advanced timepieces that are matched by elaborate design.

Patek’s complicated timepieces are usually offered in yellow, white, or rose gold, as well as platinum, but in recent years have also been available sparingly in steel editions. They are available in a range of designs – from understated dress watches to statement pieces.

The Patek Philippe Complications line features a suite of timepieces with at least two to three features on top of the time and date. The current collection has 36 models featuring the following functions:

The Patek Philippe Grand Complications collection is a suite of watches that feature over 3 complications. The current collection has 36 models featuring the following functions:

Patek Philippe uses a reference or model number to properly document their timepieces.

A Patek Philippe reference number is formed by alphanumeric characters as follows: xxxx/xxxxX-xxx, but it is common for Patek collectors to use just the first four digits to refer to a particular model.

Next five digits / letter – The first four digits are followed by a backslash, then a set of alphanumeric codes. These denote details of the case, bracelet, or dial, and work as follows:

Next to these digits is a letter that indicates the case material:

The model number is completed by a three-digit number after the hyphen. These are used to indicate a version of the dial within a reference, as Patek Philippe often manufactures several different dial versions for the same model. ”001” refers to the first dial version, followed by ”010”, ”011”, and ”012” for next three iterations, and so on.

WHAT IS THE MOST COMPLICATED WATCH PATEK PHILIPPE HAS PRODUCED?

The Grandmaster Chime ref 6300 is the most complicated Patek Philippe wristwatch ever made. Released in 2014 in time for the 175th anniversary of Patek Philippe, the timepiece boasts of 1,366 parts and 20 complications, as follows:

Only seven of these were made, one of which is displayed at the Patek Philippe Museum in Geneva.

WHY ARE PATEK PHILIPPE COMPLICATIONS SO EXPENSIVE?